“Elevate the splits and stains”: In Conversation with Kate Hargreaves | Book*hug Press 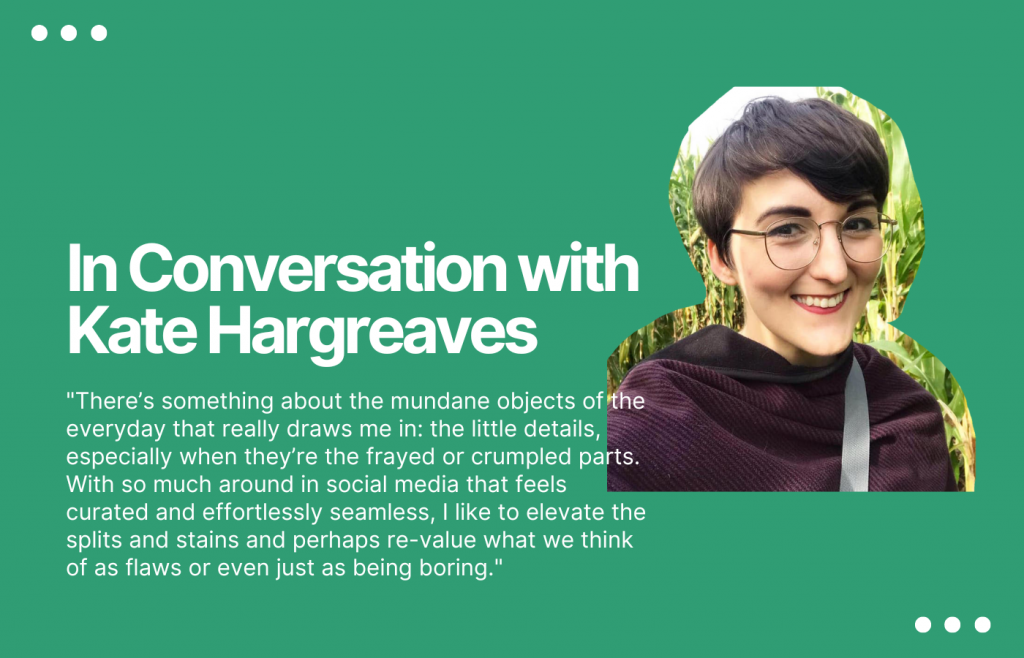 Today, we are delighted to be in conversation with Kate Hargreaves, author of tend.

A much anticipated follow-up to Leak, tend is a visceral and playful poetry collection which explores feelings of being distanced from loved ones, physically and emotionally; striving to be better (at chores, at intimacy); and tending to the things that fracture.

In the following conversation, Hargreaves shares thoughts on tend‘s inception and the small moments of inspiration that turn into poetry. She discusses the collection’s many meanings and tensions, held together through the poet’s affectionate gaze.

B*H: Your previous collection, Leak—which explores the body’s boundaries—was inspired partially by your participation in roller derby and the bruises that came along with it. How did tend first occur to you?

KH: I don’t think I would necessarily draw a straight line between roller derby and Leak, but derby was definitely part of the experience that I drew from in writing it. I’ve always been drawn to writing that is grounded in the body, and roller derby and its associated aches and pains sort of put a spotlight on some aspects of that bodily experience. It also brought to the forefront some other embodied issues I had grappled with from an eating perspective, which also appear in some of the poems in Leak; however, many of the ideas had been percolating for several years, so perhaps the roller derby connection just helped put them into perspective.

With tend, I initially thought I was going to write more specifically about the experience of a body exercising and all the associated discomforts and pressures, but I couldn’t really get moving on that project. Then I decided to let myself write poems without having a project in mind and assumed they would never fit together; of course, the body was all over them, especially when I broke my leg midway through writing the manuscript, and the pain and trauma of that insisted on being at the forefront. In writing through that experience, and through isolation, relationships, distance, and home, I found myself returning to the same themes and images, so it was quite an organic process. Still, I wasn’t quite sure that everything would come together, and I have an amazing editor, Jennifer LoveGrove, to thank as her eye for where to push poems further or pull them back really helped make tend feel whole.

B*H: tend is preoccupied with everyday objects: the “scuffed toes” of shoes, “receipts,” “dogs,” stained tee shirts. What were you looking to discover in these physical and metaphorical encounters with the daily?

KH: There’s something about the mundane objects of the everyday that really draws me in: the little details, especially when they’re the frayed or crumpled parts. With so much around in social media that feels curated and effortlessly seamless, I like to elevate the splits and stains and perhaps re-value what we think of as flaws or even just as being boring. There’s so much unexpected beauty in the minutiae of the day-to-day, and for me giving these experiences or objects a second look often means they end up in a poem.

B*H: Many different animals populate the largely domestic world of tend. Why is that?

KH: The short answer to this is that I have always been drawn to animals, and I, perhaps in a ridiculous way, tend (haha!) to greet the squirrels on the street and say hello to all the neighbourhood cats. Years ago, I developed a habit of saying, “I’m sorry” when I pass roadkill on my walks, and I can’t seem to stop now. tend is as much wrapped up in the natural world, especially that which exists in the city and on the borders of the train yards and alleys, as it is with the body, and that comes with rabbits and squirrels and dogs. The act of moving through a city as a pedestrian is also quite central to many of the poems, so the animals throughout are connected to that experience.

The last section in the book also deals with feelings of disconnect and nostalgia, including the stories I read and re-read as a child, from The Animals of Farthing Wood to Watership Down, so there is a kind of comfort in writing those creatures into the poems as well. And the indoor cats…well, my cats are such a huge part of my life that I knew they would work their way into at least a few poems, and given the context of isolation, their presence was amplified as a type of comfort too, albeit sometimes a comfort that shows its claws.

B*H: Common objects come alive in tend’s incantatory rhythms. Words jostle against one another, their meaning loosens and becomes almost onomatopoeic, a buzzing, bustling play of sounds. Was this this effect intentional? How did you go about creating it?

KH: I read all my poems aloud as I write them as I think it’s important to have them work on and off the page. If they don’t sound right, even if the imagery is working for me, I know I need to re-work. I don’t have a particular method of achieving the sound I want beyond play because I don’t know what that sound is until I hear it. I play with the words, sometimes with puns, or breaking words into parts to achieve the desired effect, and I listen for what sounds ‘off’ to my ear as I read. It is actually quite similar to how I approached book design as I am never sure exactly what I want to create until I am in the process of doing so; at that point, I can see what is working and what isn’t but sometimes can’t articulate specifically why. With writing, it definitely makes it difficult to work in public without getting the occasional odd glance from strangers because I am always reading under my breath.

B*H: What role does humour play in your poetics?

KH: Going back to play, humour feels like it has a similar role in my writing. Especially when things are difficult or traumatic, there are inevitable moments of laughter, and humour has a role in getting us through these struggles. There’s definitely a place for solemn poetics, but with the absurdity we encounter and the way chance can change your life in an instant (like falling in a weird way and snapping your leg, for example), having some levity feels refreshing to say the least.

B*H: Does “tend” (the word/concept) have more than one meaning in this collection?

KH: The idea of ‘tend’ to me works on a number of levels: a tendency to do something, as in a habit, and the mundanity of the everyday, but also looking at that for beauty and comfort; tending to a garden or a plant or a relationship or oneself, taking that care and time and gentleness in a world that can be incredibly harsh; tenderness as in revaluing sensitivity. Again, with the harshness that seems to be everywhere, revaluing the notion of being tender. On a sonic level, I also find that the word itself feels good to say, like a little bundle that you can hold against the roof of your mouth.

B*H: There is a kind of weight and rootedness throughout these poems. We encounter imagery of boots filled with sand, boots packed into soil, homes covered in dust. Is it stuck-ness or a comforting gravity?

KH: I think it’s both, depending on the context. There’s certainly a sense of feeling restless and stuck and wanting to pace and move around while not being able to, but there is also the sense of a weighted blanked, being comfortingly heavy and settling into the earth. The speakers deal with both sensations, and there is certainly some tension between the two that doesn’t get resolved one way or the other.

B*H: tend is quietly aspirational, filled with expressions of a desire to live right—be a little more organized, a little more generous, a little more self-aware. Does poetry help the poet or reader to achieve this growth/balance?

KH: These imperatives are sort of double-sided for me, in that they are forward looking and something to grasp for, but also sometimes a fiction or an impossibility. Sometimes with that weighted blanket sensation, it’s just about settling into where you are and being okay with that relative stasis, having a rest as part of growth, and letting the weeds grow over. I think that the poems, hopefully, tell the poet and maybe the reader that striving to feel okay without striving is also enough. And that being more tender is not a bad thing.

B*H:  What do you hope readers will take away?

KH: I hope that the readers take away a sensation from these poems, that they can feel the tangible aspects of them, and perhaps consider the value in a weed or a stained shirt or a broken latch when they come across them.

Kate Hargreaves is the author of the poetry collection, Leak, as well as Jammer Star, a roller derby novel for young readers, and Talking Derby, a book of prose vignettes. She holds an MA in English and Creative Writing from the University of Windsor, where she received the Governor General’s Gold Medal in Graduate Studies. Her work has appeared in literary journals across Canada, the US, and the UK. As a book designer for numerous Canadian presses, Hargreaves has received honours from the Alcuin Society for Excellence in Book Design, the CBC Bookie Awards, and the Book Publishers Association of Alberta. She grew up in Amherstburg, Ontario, and lives and works in Windsor.