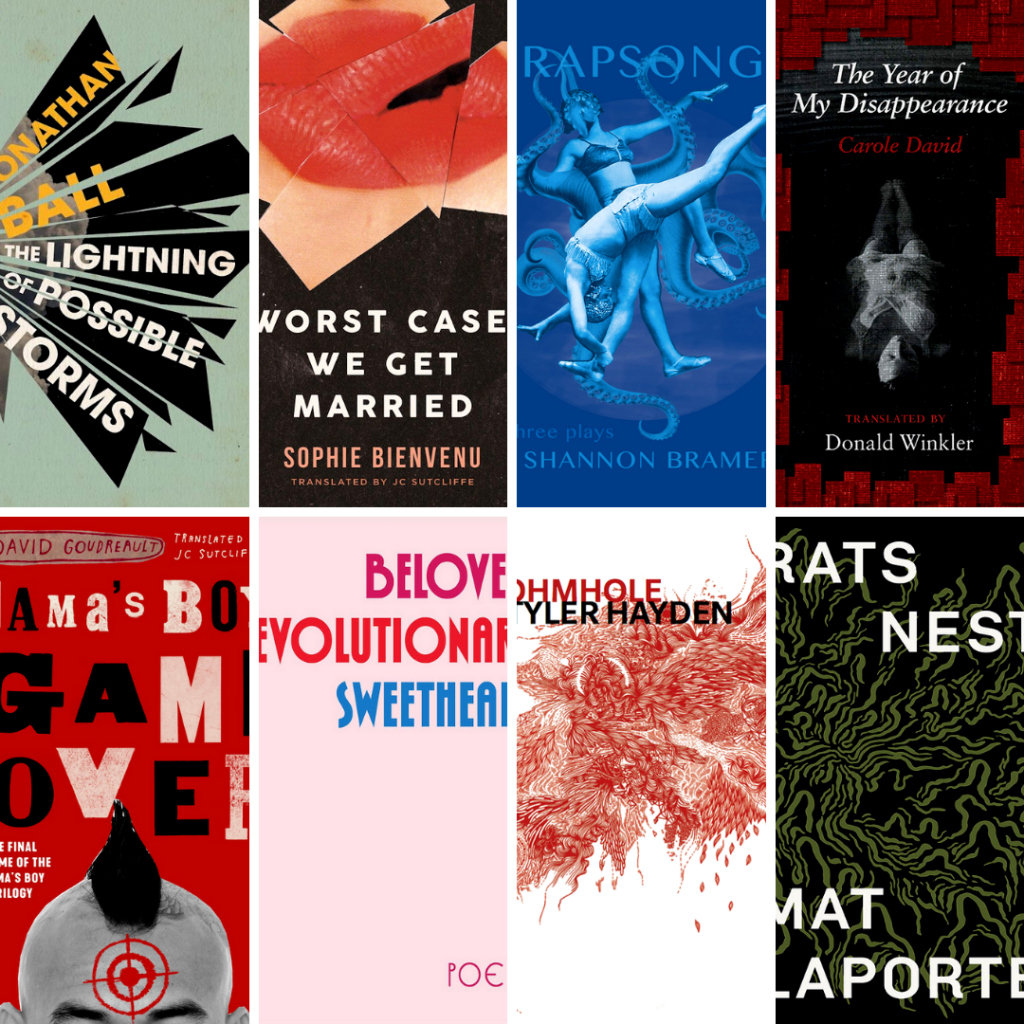 We have a confession: we’re slightly fanatical about Halloween. We’re also fanatical about reading lists, so being adventurous, we’ve decided to combine the two topics of interest. Today’s selection of books embodies the spirit—or, rather, the spirits (pun intended)—of the season: costume and disguise; the supernatural and the uncanny; cosmic horror and primal suspense. The ideas and images in these books are always with us, but at this time of year they take on an unreal, highly-concentrated power, which would be hard to resist even if we wanted to.

The Lightning of Possible Storms by Jonathan Ball

Jonathan Ball’s first collection of short fiction blends humour and horror, doom, and daylight. In it, a mad scientist seeks to steal his son’s dreams; a struggling writer, skilled only at destruction, finds himself courted by Hollywood; a woman seeks to escape her body and live inside her dreams; citizens panic when a new city block manifests out of nowhere; and the personification of capitalism strives to impress his cutthroat boss. Saleema Nawaz, author of Songs for the End of the World, calls the book “cheerfully horrifying, and full of the unexpected,” as well as “an entertaining Borgesian foray into the existential dread of writing itself.” Highly anticipated, The Lightning of Possible Storms was released on September 30th, 2020.

Worst Case, We Get Married by Sophie Bienvenu, Translated by JC Sutcliffe

Originally published in French in 2011 as Et au pire, on se mariera, and now a major motion picture, acclaimed Quebecoise writer Sophie Bienvenu’s Worst Case, We Get Married—translated by JC Sutcliffe—is a powerful and moving coming-of-age novel. It’s also a little bit of a murder mystery, and is narrated by Aicha, a thirteen-year-old girl, as a confessional statement to a social worker. “Sophie Bienvenu gets inside the head of a whip-smart, lovesick teenager whose fantasy life bleeds into her reality to chilling effect. Listen to her story and be seduced (and horrified),” writes Neil Smith, author of Boo. He adds that “Worst Case, We Get Married is Quebec lit at its best.”

From playwright and poet Shannon Bramer comes Trapsongs, a collection of three dark comedies that navigate the realm of the surreal and absurd. Trapsongs is by turns comedic, grotesque, and profane, but is all the while a tender exploration of the human condition in all its hilarious and humbling glory. Although each of the book’s three plays—“Monarita,” “The Collectors,” and “The Hungriest Woman in the World”—is a discrete creation, they contain and hold each other like a matryoshka doll; all of the main characters are trapped within the song of their own lives. We’d be remiss if we didn’t mention the sad octopus, which not only makes this book Halloween-appropriate, but fundamentally amazing.

Trapsongs will be released on December 8th, 2020.

The Year of My Disappearance by Carole David, Translated by Donald Winkler

Carole David’s The Year of My Disappearance—translated by Donald Winkler—is a searing, surreal, darkly comic descent into a woman’s psyche. Present here are figures lodged in her memory: lovers, strangers, her mother, and Bosch-like apparitions out of her dreams and imaginings. Through it all, a ­fierce combat is being waged between immolation and survival. As David has written, “I gave free range to the lives that dwelt within me.” The result is a pitiless assault on the author’s own torments and pretenses.

Canthius praises Winkler’s translation, writing that it “beautifully evokes the interplay of the surreal, dread and dark humour in David’s work. The language is metaphysical yet at the same time graphic, earthy, colloquial.” And Hughes Corriveau, author of Le Devoir, calls the book “sharp-witted,” writing that it “speaks of the landscape a woman may come to inhabit who is undone, overwhelmed by the violence to which any life is subject when weighed down by remembrances.”

Mama’s Boy: Game Over is the third and final book in David Goudreault’s bleakly comic bestselling Mama’s Boy trilogy (which also includes Mama’s Boy and Mama’s Boy Behind Bars). In the conclusion to the award-winning, bestselling series, the titular Mama’s Boy has been transferred from prison to a psychiatric hospital. He manages to escape, and goes on the run in Montreal, hiding in plain sight—a creative way to get into costume—and committing to tracking down and reuniting with his estranged mother. Like its predecessors, Game Over takes the reader on a journey of murder, mayhem, and infectious high-energy: all Halloween staples, in our opinion (with the hopeful exception of murder). “David Goudreault will captivate you from the first line!” writes Kim Thuy, author of Vi and Ru.

Beatriz Hausner’s Beloved Revolutionary Sweetheart reaches back through the millenia to create an unexpected, unconventional, and contemporary exploration of one of humanity’s oldest pleasures. From wistful romance to explicit sex, these poems are inspired by the troubadour poets of Provence and Italy, and invoke such historical figures as the Byzantine Empress Theodora and her husband, Emperor Justinian, not to mention the Countess of Dia—Beatriz—a major poet of the troubadour tradition. The illustrious cast of Hausner’s poems wears many costumes: they float down a runway in silk and moiré; are “shackled to strange / furniture” and “roped tightly into knots,” embodying sensual, timeless archetypes. Equally threaded throughout the book is a spirit of play: pure experimentation and pure expression. Tamara Faith Berger, author of Queen Solomon, calls these “elegant, thirsty, and visionary poems, echoing with song.”

Tyler Hayden’s Ohmhole is dystopian CanLit at its finest. Imagine a not-so-distant future in which everyone is HIV+ and, sooner or later, ends up in a state-operated hospice. In a broken socio-economic order, governments have been reduced to a single function: extending the lives of their citizens with anti-retroviral treatment (ART) drugs. Meanwhile, rumours have coalesced into a widespread belief in the existence of a cure for HIV that is also exchanged through bodily fluids. Sex—casual, friendly or indifferent in all its forms—offers a possible cure. Consequently, genders, sexuality and relationships have been altered drastically. Elliott lies in the hospice among the dying, his only remaining purpose to serve as a subject for sociological and psychological research.

“Tyler Hayden has written a world that is as thrilling as it is nightmarish, a dystopia where almost everyone is suffering from the same terminal illness that may or may not have a cure, where government is everywhere and nowhere,” writes author Suzette Mayr. “His language is meditative, sensual, and always engrossing—the work absolutely original and alarmingly prescient. Ohmhole troubles at the same time that it illuminates.”

Mat Laporte’s debut short story collection, RATS NEST, introduces readers to a protoplasmic, fantastical underworld, as navigated by a self-reproducing 3D Printed Kid made especially for this purpose. As the Kid descends the layers of a seemingly never-ending pit, its nightmares and hallucinations—recorded in stunning detail—unfold in twelve chilling stories of unreality that will make readers think twice about what it means to be a human (or humanoid) on the planet we call home. “Like the best dystopian sci-fi, RATS NEST instills the sense that things are progressing normally even as everything goes horrifyingly wrong,” writes Broken Pencil. The book was a 49th Shelf Most Anticipated Fall 2016 Fiction Selection.