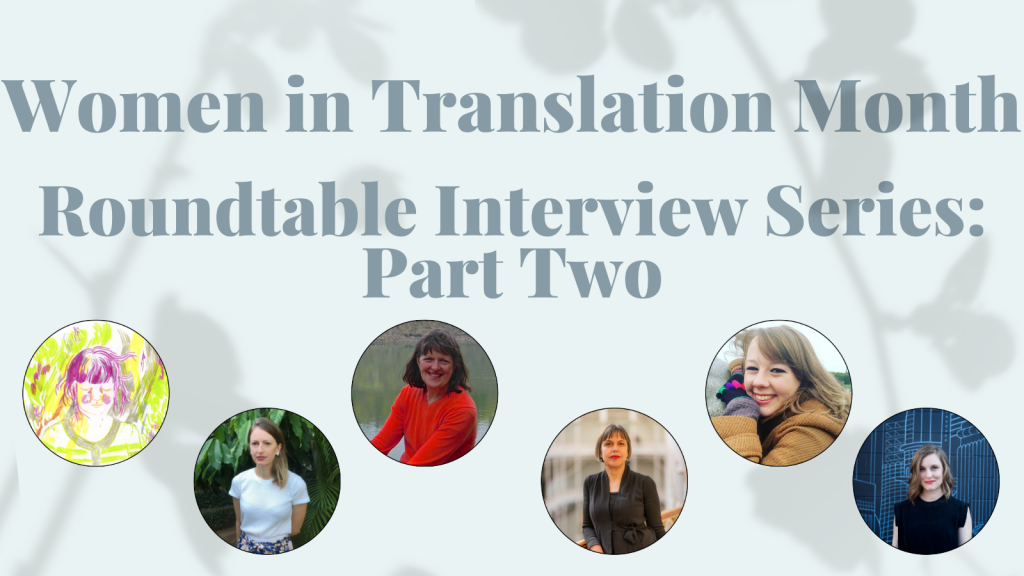 August may be coming to an end, but we are still celebrating Women in Translation Month! As promised, we’re pleased to share part two of our three-part roundtable interview with our lovely translators. Today we’re discussing the idea of translatability—words and phrases that are lost but also gained in translation, phrases we love in specific languages, works of translation we admire.

As a reminder, we are offering 20% off all books written and translated by women for the month of August! As well, use #WITmonth or #womenintranslation on social media to join the conversation and show us what you’re reading.

Cristina Sandu, author and translator of The Union of Synchronized Swimmers:
I have just moved to Germany and I was told the other day that in German you dream from something. I like this.

There are some singular words in English that I really struggle with when translating into Finnish, because they seem to contain so much, and I can only envy English for them: for example “intimidating”, “urgency”, “befriend”, and “endanger”.

When it comes to another translator’s work, this isn’t a very specific example, but I love Anne Carson’s way of using translation to tell a story: in Nox she combines translating Catullus with the story of her brother. The translation and the story develop side by side.

Aleshia Jensen, translator of Céline Huyghebaert’s Remnants:
I can’t think of any that are untranslatable off the top of my head, but in French, we have our heads in the moon instead of the clouds, which I’ve always loved.

Erín Moure, acclaimed poet and translator of many works including Chantal Neveu’s This Radiant Life:
There are many words and phrases in one language whose complete set of registers and nuances and pointings can’t be fully translated. A translator can only create an approximation of effects that will work in the new culture and language. It’s endlessly intriguing and wonderful work, translating!

Kari Dickson, co-translator of Mona Høvring’s Because Venus Crossed an Alpine Violet on the Day that I Was Born:
I’m not sure that it’s untranslatable, but in Norwegian there is this lovely way of thanking people for what you have shared together, in parting—thank you for today, thank you for the trip, thank you for now—and in greeting, when you meet again—thank you for the last time. Whenever I have spent prolonged periods in Norway, I find that I miss this form of acknowledgement in English.

As for favourite passages in translation, gosh, that’s hard! There are so many moments of pleasure when you find the right word, in Because Venus, one of those was coming up with “muttonhead”, as Ella says of her sister Marta. Another author who I translate, Gunnhild Øyehaug (published by Farrar, Struas & Giroux), often has wildly imaginative digressions that eventually loop back to the story, and one that I often return to, in the book Wait, Blink, is in fact a whole chapter that starts: “Meanwhile: what’s happening on the seabed off Greenland?” and follows the progression of a salmon that has swallowed a gold tooth (which is pivotal to one of the story strands) from Greenland back to Norway. But I’m embarrassed to say that I’m struggling to think of a particular passage by another translator, especially as I learn so much from reading other people’s translations. This isn’t strictly speaking translation, but quote from a poem by the bilingual  (or even trilingual, I think) poet Agnes Török about bilingualism (written in a mixture of English and Swedish), which I think so perfectly describes what happens when you think, live and breathe with two languages side by side:

Kristen Renee Miller, translator of Marie-Andrée Gill’s Spawn, and Heating the Outdoors (forthcoming):
This one’s on my mind right now, since I’ve just been working on it: there’s a poem in Gill’s newest book that opens with the image of the poet blowing words the way you blow a kiss—“je souffle des paroles / comme on souffle du bec.” And it ends with the line “un fond de lait qu’il faut boire avant qu’il passe date”— “the last drink of milk before it expires.”

How lucky that the word for this in English is “expires.” It links us back to the breath in the poem’s opening lines—blowing words, blowing a kiss. That detail isn’t there in the French expression “qu’il passe date” (literally “past the date”). “Expires” is a special gift lent to the poem by the English translation. In conversations about translation, the focus is so often on the “untranslatable” or the “lost in translation,” but translation is an exchange between languages. And sometimes there’s a chance—with great sensitivity to the author’s project and intent—for something to be gained.

Rachel Rankin, co-translator of Because Venus Crossed an Alpine Violet on the Day that I Was Born:
I have to admit that I am somewhat resistant to the idea of untranslatability. As I mentioned, I have a particular interest in translating poetry, and poetry is often described as untranslatable, which I’m sure is news to the poetry translators among us! Furthermore, as someone who works with the Scandinavian languages, this resistance may also be a result of the English market capitalizing on various Scandinavian words, packaging them as untranslatable summations of the Nordic utopia, but which are really just the Scandinavian words for more or less universal concepts (looking at you, hygge…). I very much subscribe to the idea that if it can be interpreted, then it can be translated—after all, different languages are different beasts, with different ways of discussing different concepts.

However, that’s not to say that there aren’t certain words I don’t absolutely adore, particularly since Norwegian uses a lot of compound words. I am a particular fan of “tannlege”, the word for “dentist”, which literally means “tooth doctor”! However, I think one of my all-time favourite words is the German “antibabypille” for the contraceptive pill—it does what it says on the tin! And, being Scottish, I think I have to throw in a couple of Scots words for good measure—”shoogle” [to shake], “numpty” [a bit of an idiot; see also “eejit”], “peelie-wallie” [pale and sick-looking]…I could go on!

As far as favourite translated passages go, I have to say that almost every page in Michele Hutchison’s translation of Marieke Lucas Rijneveld’s The Discomfort of Evening completely captivated me. I don’t remember the last time I read a book that got under my skin as much as this one did—it made me squirm, and it made me slam it shut, and it made me open it again almost immediately so I could keep reading, at times through my fingers. It’s definitely one of my favourites!

Join us next week for our third and final Women in Translation roundtable discussion!

Cristina Sandu is the author and translator of The Union of Synchronized Swimmers, winner of the 2020 Toisinkoinen Literary Prize. Her debut novel, The Whale Called Goliath, was nominated for the Finlandia Prize, Finland’s most prestigious literary prize.

Kari Dickson translates from Norwegian, and her work includes literary fiction, literary fiction, children’s books, theatre, and nonfiction. In 2019, Book*hug Press published her translation of Rune Christiansen’s Fanny and the Mystery in Grieving Forest. Her co-translation of Mona Høvring’s award-winning novel, Because Venus Crossed an Alpine Violet on the Day that I Was Born, is forthcoming this October.

Kristen Renee Miller is the translator of Spawn by Ilnu Nation poet Marie-Andrée Gill. In Spring 2023, Book*hug Press will publish her translation of Gill’s latest book, published in French as Chauffer le dehors. Miller lives in Louisville, Kentucky, where she is the managing editor for Sarabande.

Rachel Rankin is a poet and translator based in Edinburgh, Scotland. Her co-translation of Mona Høvring’s award-winning novel, Because Venus Crossed an Alpine Violet on the Day that I Was Born, is forthcoming this October.