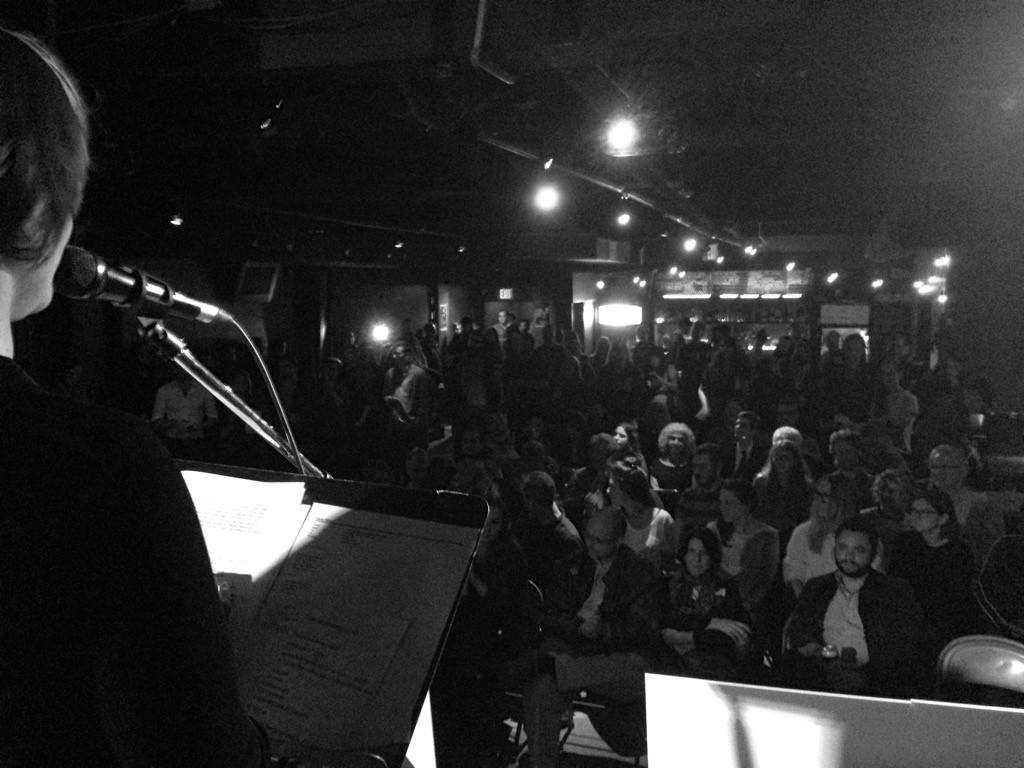 BookThug’s Fall 2015 launch party at The Garrison on April 13th brought together BookThugs from across the GTA and beyond to celebrate the launch and release of nine new innovative titles. With readings of poetry and fiction to an enthusiastic audience, the night was captured on film by our media guru, John Schmidt.

Joining us all the way from his home in France, Samuel Andreyev started off the night with poems from his sophomore collection, The Relativistic Empire.  His new book combines the brevity and lightness of a comic strip with the complexity and richness of French symbolist poetry.

“The Relativistic Empire is a carnival of specific instructions. Andreyev’s declensions describe absurd reality. Humour takes the poems on all the rides, from ‘real’ to ‘false’ in all their mirrors.” —Alice Burdick, author of Holler

Next up, acclaimed Canadian writer Brian Dedora read from Lorcation. The book follows Dedora’s reading and re-enactment of Federico García Lorca’s life and writing, especially the Spanish author’s emergent awareness of his homosexuality, culminating, for Dedora, in a new understanding of Lorca’s call to attend to the living within the enigma of death.

Coming all the way from Terrace, British Columbia, Josh Massey read from his novel The Plotline Bomber of Innisfree, a satirical take on a group of artists who become suspects in a series of pipeline bombings. Full of sharp wit and suspense, Massey’s novel offers a humorous look at industrial society.

“Like a kingbird perched on a northern pipeline hand wheel, Massey catches his stories from a source far removed from the espresso bars of the Information Age. He understands both these worlds, and as a satirist he unifies them, has us thinking not of others but as one.” —Michael Turner, author of 8 X 10 and Hard Core Logo

Order The Plotline Bomber of Innisfree by Josh Massey here.

Adding a bilingual element to the night, Chantal Neveu read in both French and English from A Spectacular Influence, her philosophical and perceptive book of poetry, which was gracefully translated by Nathanaël.

“[A Spectacular Influence] traverses the question of the representation and the place of the body in the midst of the fluctuating settings that surround us.” —Nicolas Tardy, Cahier Critique de Poésie

Steven Ross Smith first paid thanks to all the BookThugs in attendance, then read from Emanations, the sixth installment in his fluttertongue series. A renowned sound poet, this collection marks Smith’s return to verse and draws on themes of poetics, nature and social problems. His poems fluttering with rhythm, Steven Ross Smith’s reading was an exciting play of words.

“Steven Ross Smith’s Emanations: fluttertongue 6 both sets its own landing field and touches down, in poetry that bucks and soars. Even the hyphens dart about in this surprise-fest, this portrait of the poet as renewer and renewed.” —Gerald Hill, author of Hillsdale Book

Following a short intermission, Shannon Maguire started off the second set with a melodic reading from Myrmurs: An Exploded Sestina. Myrmurs is Maguire’s follow-up to fur(l) parachute (BookThug, 2013) and is the second book in a planned Medievalist trilogy. It is an exploration of living systems: cities and languages as self-organizing entities; ants; interspecies entanglements; strange attachments; neocolonialism and how to break free of it.

“What a relief to find ant traffic arriving at our picnic. Maguire’s poems are acrawl with chaser light shuttles and swaps and deep-kissing industry. Lie back on the cat lick pen nib and let the interswarm of city and green, dream and wake, queer and norm work through your ears, yielding nothing but gorgeous trouble.” —Susan Holbrook, author of Joy is So Exhausting

Jean Marc Ah-Sen read from his debut novel, Grand Menteur, which delves into the world of Mauritian street gangs, told through the eyes of the daughter of the Grand Menteur.

“Jean Marc Ah-Sen’s Grand Menteur is a dazzling display of diction, filled with Mauritian Kreol, Latin tags and masterful English, with wonderful narrative momentum. From the island of Mauritius to the island of England and later, homeless shelters in Toronto, it is a fascinating story of Mauritian street gangs, emigration, capers that don’t pay, and a father-daughter relationship like no other. Jean Marc Ah-Sen’s Grand Menteur is voice-driven fiction at its lyrical best.” —John Goldbach, author of The Devil and The Detective

Next, Liz Worth read from her highly anticipated book, No Work Finished Here: Rewriting Andy Warhol, which is a remix project of a, A Novel by Andy Warhol. Turning each page of Warhol’s novel into a unique poem by reworking the original text, Liz Worth captures the energy of 1960’s Manhattan in Warhol’s famous Factory scene through her emotionally charged poems.

“Liz Worth’s collection of poems is a testament to both her artistry and daily discipline. In an age of diminished attention, her perseverance in daily poem—making by mining the same source over and over reminds us that artists can be a model of life without distraction-how to go deeper and deeper until you find yourself looking back at you.” —Heath Allen, composer of Andy, A popera

The AnthroPAULogist Jess Taylor read from her debut collection of short stories, Pauls, captivating the audience with her reading from the opening story, “Paul” (winner of the Gold 2013 National Magazine Award for Fiction). Pauls is a collection of ten interconnected stories about different Pauls: friends, lovers, siblings, humans. The stories are full of raw emotion, simplistic truths and humour, and focus on themes of identity, relationships and love. It’s no wonder Pauls is one of the most anticipated books of the season from one of the most exciting young writers on the alt-lit scene.

“A magical and penetrating collection of strange, mundane, traumatized and ecstatic people who are all named Paul. Its simple sentences are little atoms of wonder.” —Heather O’Neill, author of The Girl Who Was Saturday Night and Daydreams of Angels

Thanks to all the authors and to everyone who made BookThug’s Fall 2015 Book Launch Party such a huge success. Thanks to everyone who came out, and an especially big thanks to BookThug Web Media Consultant John Schmidt for capturing the videos!