To Find Belonging: In Conversation with Hana Shafi | Book*hug Press 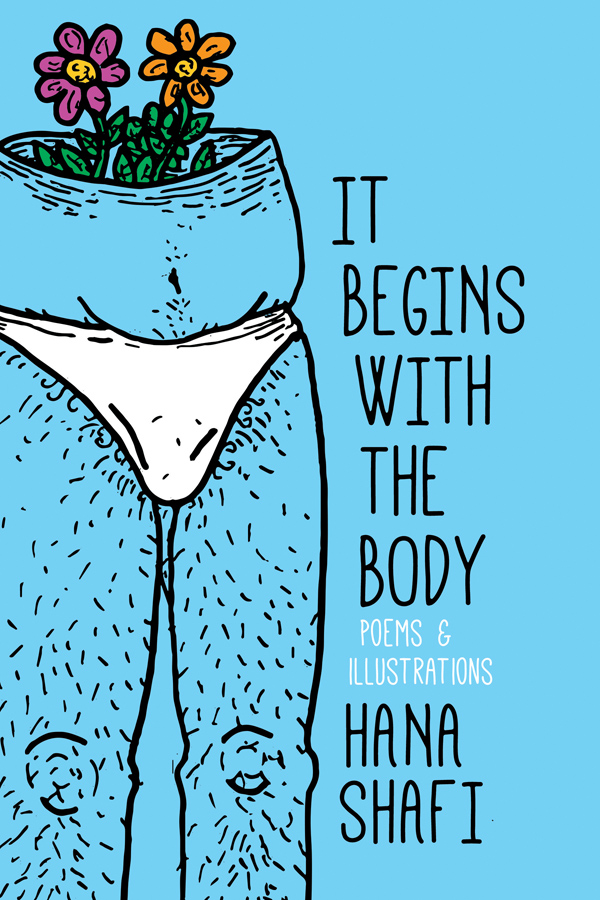 It Begins With The Body by Hana Shafi explores the milestones and hurdles of a brown girl coming into her own. Shafi’s poems display a raw and frank intimacy and address anxiety, unemployment, heartbreak, relationships, identity, and faith.

Juno Award nominated musician and songwriter Alysha Brilla calls It Begins With The Body “the anthem of [her] youth.” Lauren McKeon, author of F-Bomb, Dispatches from the War on Feminism, says, “Hana Shafi writes with a powerful and devastating honesty about the things women are told they ought not talk about. From body hair and financial angst to heartbreak and self-doubt, Shafi examines all the expectations society places on women—and pushes back against these outrages with a voice that is both vulnerable and damning.”

Accompanied by Shafi’s candid illustrations that share the same delightful mixture of grotesque and humour found in her poems, It Begins With The Body navigates the highs and lows of youth. Funny and raw, personal and honest, Shafi’s exciting debut is about finding the right words you wished you had found when you needed them the most.

Mary Ann Matias: Can you speak to the editorial process? Did the manuscript undergo substantial changes over the course of its development? Is the finished book drastically different from what it was at the start of your project?

Hana Shafi: It’s actually not overwhelmingly different from what it started as. The original ideas and themes are still there. The editing was more so Vivek helping me refine my work, encouraging me to be deliberate and intentional with every word I choose in a poem and, at some points, pushing me to dig deeper. A few of the poems were a little short, because I wasn’t really delving into the heart of the theme. Vivek really encouraged me to put my whole heart into it, to dive right in.

MM: Is there a particular idea for the book that didn’t make it into the final draft?

HS: Not really, but the chapter about faith was originally not planned as part of the book. It was after Vivek noticed that I had numerous poems that were referencing religious symbolism and faith that she was like, “this seems like it’s really important to you, maybe we should dedicate a whole chapter to it.” I totally agreed with her. It felt right to add that in.

HS: I reference songs and some pop culture stuff in the book, actually. So a few songs come to mind: “Self esteem” by Offspring, “Violet” by Hole, “Doll Parts” by Hole, definitely a lot of songs by Amy Winehouse, as she’s one of my biggest artistic inspirations. I also reference qawwali in one of my poems; qawwali is essentially Sufi devotional music. It’s very spiritual. One song in particular comes to mind: “Saanson Ki Maala Pe Simrun Main” by Nusrat Fateh Ali Khan. Throughout the book as well, I talk a lot about high school. So if my book had a soundtrack, I’d have to throw in a lot of the really corny emo music I was listening to back then like HIM, and AFI, and these terrible nu metal tracks. If my book had a soundtrack, it would be a complete hot mess; an amalgamation of punk, grunge, emo, Bollywood, qawwali, r&b, and some Britney Spears thrown in, too.

MM: If your book had a taste, what would it be and why?

HS: It would taste like a big sugary slushie from a gas station, and it would taste like samosas, too, haha. I poured a lot of my life experiences into this book, and those two particular foods are extremely nostalgic for me. I grew up in a house that had a gas station right behind it, so a lot of my childhood was spent with my friend and I pooling our dimes together to buy slushies. Samosas are because I would be so happy when my mom made some, and I still am.

MM: Imagine you could recommend this book to one fictional character; who would it be and why?

HS: I would recommend it to Sarah from Labyrinth, for a few reasons. One is that she’s all about dramatic recitations, and I would love to see that character read my poems aloud. The second is that it’s just one of my favourite movies; I love the songs in it, the magic of the puppets, how whimsical and weird it is. And three, because Sarah is kind of a weird kid; a bit of a loner, an outcast. She dives into these fantasy worlds to find belonging, and I felt the same way as a kid. So I think Sarah would be able to relate to some parts of my book.

MM: What are you currently working on?  Are there certain influences or lessons you’ll be taking from this project into the next?

HS: I’m brainstorming ideas for another book, but slowly. This book only just came out, and I want to be able to devote myself to the reading performances I do, to really push this book so that more people get a chance to read it. I don’t want to distract myself by feeling like I have to immediately get started on something else. But I’m definitely writing, and thinking about what book I want to do next.

Order your copy of It Begins With The Body here. 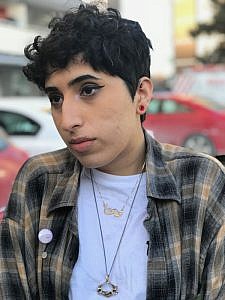 Hana Shafi is a writer and artist who illustrates under the name Frizz Kid. Both her visual art and writing frequently explore themes such as feminism, body politics, racism, and pop culture with an affinity to horror. A graduate of Ryerson University’s Journalism Program, she has published articles in publications such as The Walrus, Hazlitt, This Magazine, Torontoist, Huffington Post, and has been featured on Buzzfeed India, Buzzfeed Canada, CBC, Flare Magazine, Mashable, and Shameless, Known on Instagram for her weekly affirmation series, she is also the recipient of the Women Who Inspire Award, from the Canadian Council for Muslim Women. Born in Dubai, Shafi’s family immigrated to Mississauga, Ontario in 1996, and she currently lives and works in Toronto. It Begins With The Body is her first book.