Feature Friday: We All Need to Eat by Alex Leslie | Book*hug Press 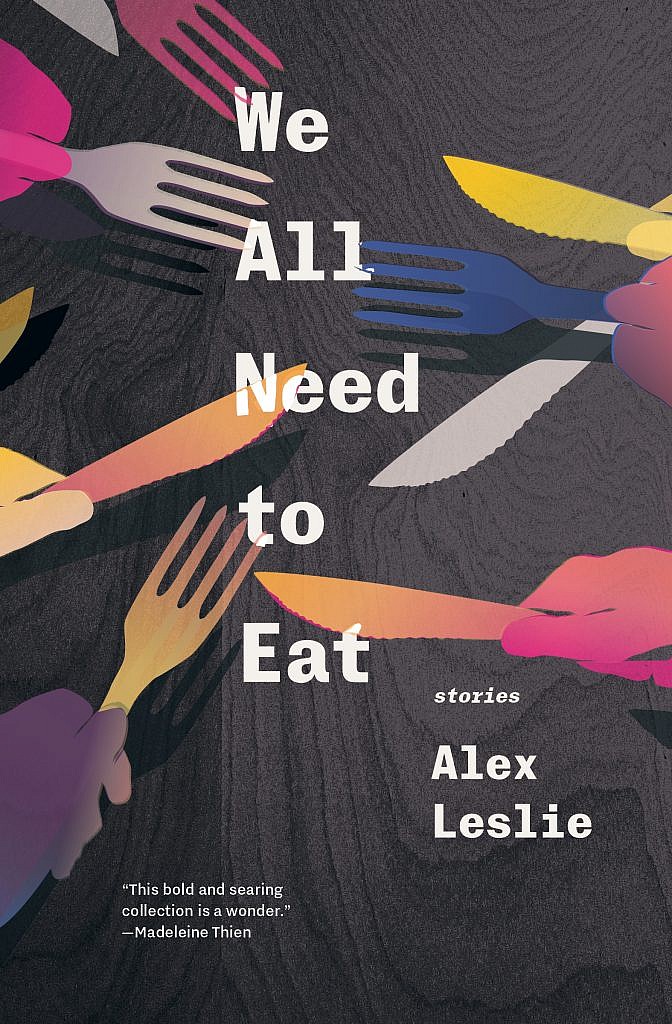 In this week’s edition of Feature Friday, we are very pleased to bring you an excerpt from We All Need to Eat, a collection of linked stories from award-winning author Alex Leslie that revolves around Soma, a young Queer woman in Vancouver. Through thoughtful and probing narratives, each story chronicles a sea change in Soma’s life.

In a review for Quill and Quire, August C. Bourré says “[Leslie’s] surprising juxtapositions, strong and deftly deployed metaphors, and dynamic sentence structures create dense emotional landscapes tied to a well-developed sense of time and place.  Scotiabank Giller Prize winning author Madeleine Thien adds to this, calling We All Need to Eat “a stunning inquiry into the sharpness of the world as it collides with the fragility – the ambiguities and possibilities – of the self.”

Lyrical, gritty, and atmospheric, Soma’s stories refuse to shy away from the contradictions inherent to human experience, exploring one young person’s journey through mourning, escapism, and the search for nourishment.

We hope you enjoy this excerpt from We All Need to Eat. Happy Reading!

From We All Need to Eat:

ON THE DAY OF THE INQUIRY, MY GRANDMOTHER stayed home in her apartment, drank red wine on her couch, watched back-to-back episodes of The Passionate Eye on CBC, and growled, “All those goddamn people are crooked anyhow,” and then she ordered in Chinese food and fell asleep for centuries. At the inquiry the man running the show walked to the front and said that he had lost our book of names. My grandmother kept the list of names in the guest room, bottom left corner of the bookshelf. She opened the book and said, “This is my last birthday,” and fell asleep again, while her apartment building rotated on the birdspine of a sundial. I went to the inquiry but never told her. She wouldn’t have liked it. The man at the front said without memories there is no past and furthermore everything you need to know is on The Passionate Eye on CBC. I went back home, hands empty. There was no inquiry in the place where her mother was from because they burned the Jewish men on the beaches and the Jewish women were the smoke. “Do you know how to name children?” my grandmother said to me. “You take the initials of their dead relative and use them again and again so that the letters are never lost.” This is written in a secret language.

I often slept in her guest room except when I slept on the couch in the living room. I realized that the upholstery was patterned with her initials when I woke up to find her initials tattooed into my cheek. Alphabet welts, they faded but stayed. “Don’t sleep on the couch,” she said. “It’ll make you achy all over and besides we don’t get tattoos in this family.” She showed me the magic trick to remove the core from an apple without moving any of her fingers. She opened her mouth and gold coins fell out. There was no inquiry and no report either because we all have new names now. We took our names from the book in the guest room or we wrote our names down in a guest book, we can’t remember which, and there is no record of the threshold. When I got home from the inquiry, I lay down on my own bed and fell asleep. When I woke up, The Passionate Eye was on CBC again, part of a series she would have loved about Hillary Clinton and empowered female leaders. The next day we released her remains and the day after that it had been a whole year since her death. I received a book in the mail. All the rest had been sold or given away or disappeared. This book made it across the ocean, in the belly of a ship that my grandmother kept hidden in needlepoint art. A person with a jug. A boy squatting in shorts. There is no record of the boat’s arrival. She always said she didn’t know very much about what had happened, nothing that would be of much use anyway. An amnesiac with a stomach full of facts. I read the book but couldn’t find my name, so I looked for my initials instead and suddenly they were everywhere, a survival of stars. I could remember every moment of the inquiry but nothing that had happened and no words that had been spoken. I’d sat in the front row and taken notes like I always do because it is important to have a record, but only the first letter of every word, all of the initials.

There was no inquiry for my grandmother’s relatives and the place they came from because she only used Yiddish to speak with her sister and with the dead. It isn’t a secret but it isn’t much of a history either. Only speak to yourself in a language only you can understand, and then you can put it away forever. The inquiry went on for a long time, until it was finished. No records were released until the ’90s and photos taken by the Extraordinary Commission are blurry as images of interstellar travel or smoke as it leaves a mouth, so who can really tell. It went on for a while and I was the last one to speak and I forgot everything I wanted to know, and said, “I’m sorry, I have to go, I’m late for the ferry to the island to go see my grandmother.” The lineup for the ferry was longer than it had ever been before. I waited for weeks and weeks, inching forward, past turnstile after turnstile, all the rows of cars winding around one another, so that I couldn’t see where the line began or ended. Service had been horrible ever since the ferries went corporate. Finally I got to the front of the line, and a BC Ferries employee leaned across her desk and snapped at me, “Where ya goin? Duke Point or Departure Bay?” I said, “I’m looking for the boat with the book.” She said, “It’s Duke Point you want then,” and gave me my ticket. It was very still. The parking lot stretched flat in all directions and I watched the people walk back and forth with their cups of Starbucks coffee and hot dogs in luminous foil wrappings. I watched a woman at the chain-link fence tell her dog to piss, command him like a soldier, kick at the mud in frustration. I watched a father tighten the yellow ropes over the top of his car to keep all his family’s stuff strapped on tight so their camping gear wouldn’t slide into the waves.

I watched some children scream mindlessly, standing in a circle, small faces bright with cold. A bird fell out of the sky. I watched the ocean glow with its own secret light. Everybody rushed for their cars when the huge white metal boat appeared, the ramps attached to it like mechanical arms. Smoke drifted up off the water and got into our nostrils and eyes. Over the speakerphone system, the woman who’d sold me my ticket said, “There was no inquiry because she died before you learned how to write this poem,” and I waited for the boat to start loading, scanned my iPhone newsfeed for updates, stared at all the unanswered messages from friends. When the boat was ready to load, the line of cars started to move forward. We were all going somewhere new.

Order your copy of We All Need to Eat here. 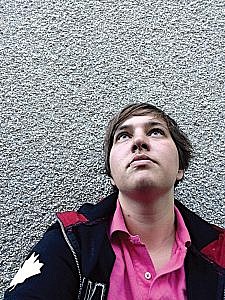 Alex Leslie was born and lives in Vancouver. She is the author of the short story collection People Who Disappear (2012) which was nominated for the 2013 Lambda Literary Award for Debut Fiction and a 2013 ReLit Award, as well as a collection of prose poems, The things I heard about you (2014), which was shortlisted for the 2014 Robert Kroestch Award for Innovative Poetry. Winner of the 2015 Dayne Ogilvie Prize for LGBTQ Emerging Writers, Alex’s short fiction has been included in the Journey Prize Anthology, The Best of Canadian Poetry in English, and in a special issue of Granta spotlighting Canadian writing, co-edited by Madeleine Thien and Catherine Leroux.