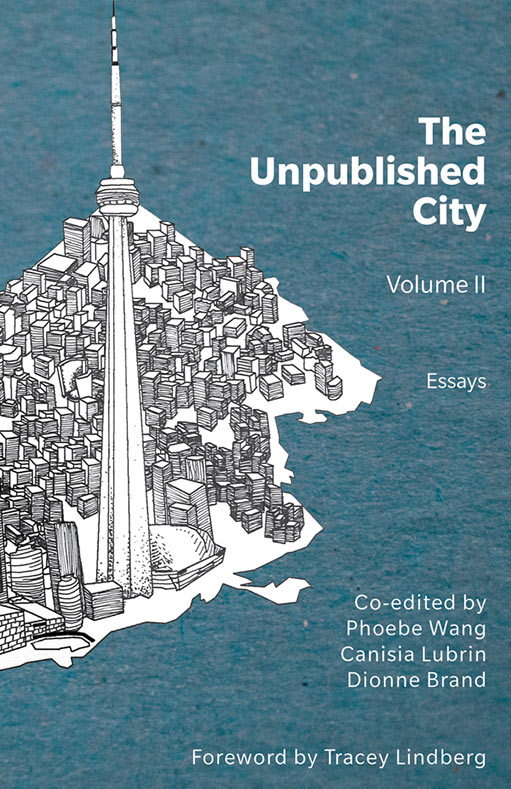 In this week’s edition of Feature Friday, we are very pleased to bring you some excerpts from a sequel to the Toronto Book Award nominated anthology, The Unpublished City, Volume II, edited by Phoebe Wang, Canisia Lubrin & Dionne Brand. Orient yourself in the city with these nineteen works of creative non-fiction that offer a different, more multifarious wayfinding. In this collection, imagination is the means by which these writers find detours, shortcuts and convergences. For them, the city is more than backdrop, but a witness, an accomplice and a lover.

This anthology’s maps of experience bring us beyond the city’s limits to the cul-de-sacs and vertical dimensions of Mississauga, Vaughan, North York and Scarborough. They follow buried creeks and migratory bird corridors, they chase highs and confront colonial landmarks, they navigate waiting rooms and prop up fallen strangers. Shaped by the city, their visions also shift and plot its architectures of living in an endless symbiosis.

We hope you enjoy these excerpts from The Unpublished City, Volume II. Happy reading!

From The Unpublished City, Volume II:

If your head dey hot, na water go cool am

This city swallows brooks and creeks, buries them, paves over them. What kind of place is this, with no reverence for rivers? What kind of city is an enemy to water? Like it wasn’t enough to use asphalt and concrete to cut us off from the lake.

What I didn’t know when I returned to Toronto is that the city lies on a migratory pathway. Every spring and fall, thousands of neotropical migrants—mainly songbirds—use the city as a stopover point to rest and refuel as they journey onwards, either north to breed or south to winter.

I am five years old and lost in the chaos of Chinatown for the first time. Streetcars clatter down the line, zipping by the bright primary colours of shops and signs, and the heavenly smell of grease coats the air. There’s people everywhere, and most of them look like me.

Summer is coming to a close. Not yet autumn, the leaves on the trees have not a blush of amber or a single speck of gold. Still, the air is much too cool for this time of year. I walk the streets of Tobermory, Grandravine, Driftwood—streets I’ve walked a thousand times before. Although the names and signs on some of the buildings have changed, some fresh paint added, there is a feeling of familiarity here that brings comfort. The shape of the world has not changed, only the surface of things. All is exactly as it had been more than twenty years ago. So, too, are the people who live here, the position they occupy in this society and what it affords them.

Framed by crystal ball streetlights and manicured trees, CAMH looks like a play-pretend city. Dollhouse people make their way through coffee shops and art galleries without ever noticing the sweaty hands guiding them. I wonder if their imprints leave me cold, or if this numbness is just another side effect of my medication.

THIS IS WHY I’M LEAVING

I hoped you would break my heart, Toronto, but I didn’t imagine it would be like this. You twisted my neck the way I twist bottle caps off cold beers in my dingy student apartment, warmed by the city’s coolness. A momentary reprieve from what I hoped to accomplish next, to see next, and to be next before the sobriety of an inevitable future hit again.

STREET BY STREET – ANECDOTES FOR MY MOTHER

I have a friend named P— and another named Déjah. They are both younger than me and they are both biracial. P— is beautiful; even the way she says “hi,” sounds mature. I am chubby. The fat on my chest is often mistaken for breasts. Weekends, there is a neighbourhood barbecue, or a trip to the bluff, or a campfire behind the government housing. I teach P— how to kiss with tongue. Déjah is familiar with this; a friend of her father has shown her how. “Lucky,” I say.

Order your copy of The Unpublished City, Volume II here.