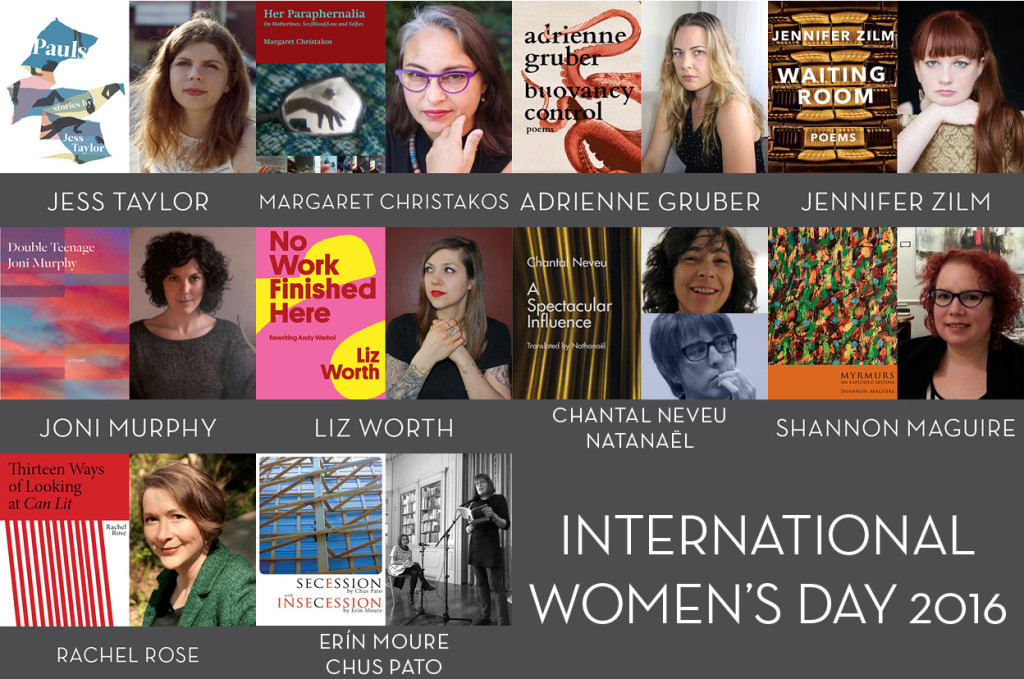 Today is International Women’s Day 2016. Today we celebrate the social, economic, cultural and political achievement of women everywhere. In honour of #IWD2016, we’ve created a recommended reading list of contemporary women writers at BookThug, both emerging and established, that you need to read now. These 12 fierce and brilliant women push at boundaries in unexpected ways and write from a place of raw and brutal honesty. Their writing challenges and haunts you, is daring and provocative, and more importantly, stays with you long after the book ends.

“Sometimes it’s okay to not want those things and to be a Strong Independent Woman instead.”
—from the story “Paul”, from Pauls by Jess Taylor

“I tried to consider in a very personal way the idea of how we as women think about seeing ourselves appear in the world, not solo, but enmeshed in each other’s overlapping appearances, creating for and with each other a form of choral “coming,” of rippling into presence, and of imagining both a past and a future that connects us.”
—from Her Paraphernalia: On Motherlines, Blood/Sex/Loss & Selfies by Margaret Christakos

“You can’t bear to swallow something so raw, so full of life.”
—from Buoyancy Control by Adrienne Gruber

“the Daughter of Truth has a role to play.”
from Waiting Room by Jennifer Zilm

“This is a spell for getting out of girlhood alive.”
—from Double Teenage by Joni Murphy

“I’m a product of her and she is that good.”
—from No Work Finished Here: Rewriting Andy Warhol by Liz Worth

“I will not hesitate to expend myself to express my recognition.”
—from A Spectacular Influence by Chantal Neveu, translated by Nathanaël

“we were as nonchalant in our speech as Robert Kroetsch &
women kept pulling down their scorching poems”
—from Myrmurs: An Exploded Sestina by Shannon Maguire

“I caught this poem like a cold, a virus from a computer, it brewed and festered for a decade, then burst its blister.”
—from Thirteen Ways of Looking at CanLit by Rachel Rose

“And then she opened the book. Oh Poetry. May I translate? Wherever you are going, dear poem, dear Chus, I am going too.”
—from Secession by Chus Pato with Insecession by Erín Moure