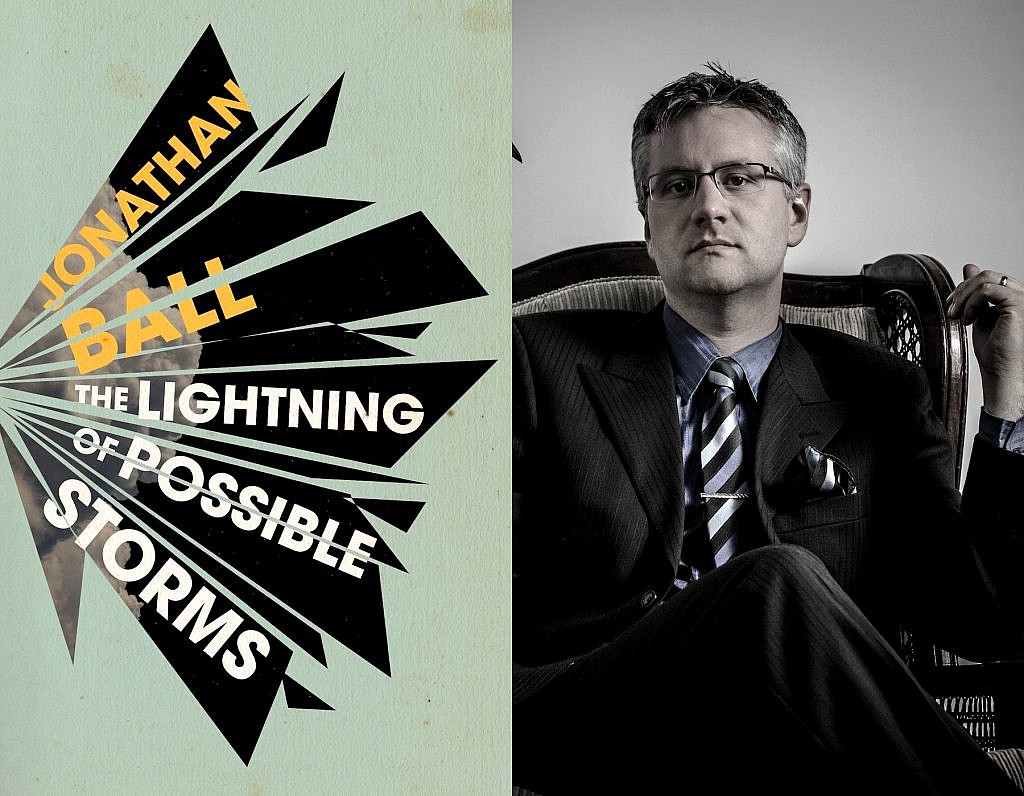 “The monster is the moral centre of the horror story because the monster represents the truth of the world.” —Jonathan Ball

Our conversation continues with author Jonathan Ball, whose short story collection, The Lightning of Possible Storms, celebrates its official publication today; congratulations! In addition to making us jealous of his bookshelf—we love the idea of Shirley Jackson and Junji Ito as next-door neighbours; stay tuned for our fanfiction—Ball’s answers to our questions reveal a razor-sharp, fearlessly original mind, one that welcomes and thrives on uncertainty. In a world whose future remains hazy, even now, Ball’s eagerness to experiment and ground his work in transformation seems not only prescient, but life-saving.

I’m finishing a novel, Kanada, a Kafkaesque comedy about a young man named I who must survive the surreal nightmare of Downtown Winnipeg, which is surrounded by a gigantic wall of black iron and from which few ever escape.

Right now, I’m reading Smashed, a collection of horror manga short stories by Junji Ito. When this is published, probably I will be reading Hench by Natalie Zina Walschots.

What book—or books­—would you recommend to a new friend?

My current recommendation to everyone is the comic book series Gideon Falls by Jeff Lemire, Andrea Sorrentino, and Dave Stewart.

What book—or books—would you recommend to an old friend?

My favourite novel remains Moby-Dick by Herman Melville. Any type of writing you like, whether you want to read conceptual poetry or action-packed thriller fiction, is found within some chapter of Moby-Dick.

Why do you write?

Personally, writing helps me discover what I think and who I am. Professionally, I earn my living through writing and writing-adjacent work. Artistically, I want to explore the nature of reality and perspectives on reality and how we use violence to shape or escape reality, when perhaps we should just accept the horrible nature of reality. This is why I am most interested in experimental approaches and in subversions of existing conventions. The whole point of making art is to shape, manipulate, and destroy the audience’s perception.

Who, where, when, and what influences your writing?

My largest influences, in a broad sense, are the Surrealists, the German Romantics, and American and Canadian Postmodernists. Dialing down to more specific examples, my core influences (in no order) are: The Sandman #6 by Neil Gaiman et al., The Satanic Verses by Salman Rushdie, The Dark Half by Stephen King, The Haunting of Hill House by Shirley Jackson, Eraserhead by David Lynch et al., Careful by Guy Maddin et al., The Legend of Zelda, the stories of H. P. Lovecraft, The Crying of Lot 40 by Thomas Pynchon, The Robber by Robert Walser, the poetry of Lisa Robertson, The Texas Chain Saw Massacre by Tobe Hooper et al., the novels of Kafka, the poetry of Rilke, the album Spiderland by Slint, and The Kids in the Hall.

These days, trapped at home, in my home office, a beautiful little room with a massive picture window. For a long while, I was writing in an art studio run by Justin Currie and G.M.B. Chomichuk, and would love to get back to that. Most of The Lightning of Possible Storms was written in a basement undergoing renovations while hunched over an old kitchen table.

My ideal writing situation is listening to the metal band Agalloch—I listen to that one specific band while writing, the same songs in the same order, always, to avoid the procrastination trick of having to develop the right soundtrack before writing. What helps me write is treating writing like my job and not making excuses. What hurts writers and writing is thinking you need something special to help you write. Writing is not an art. Literature is an art, but writing is a craft process like carpentry that may or may not produce artworks. Writers are ditch diggers that just never learned to dig ditches but instead learned to make literary artworks. And if they want to make great art or have good careers they should stop acting like they are something more elegant than plumbers, because they are not.

I write in the program Scrivener, which allows me to write non-linearly.

I am the happiest when one of my children makes something for me, whether it’s a picture or a birthday card or a sandwich.

I knew that The Lightning of Possible Storms was finished when Jay told me, “I think this should finalize the interior.”

I drink coffee but only when I am writing or have just finished writing. I drink tea outside of this when I want a hot drink, or it’s too late for writing-coffee.

Do you prefer fiction, nonfiction, or poetry in your reading or writing?

My favourite thing to read (and write) is horror, although The Lightning of Possible Storms only flirts with the genre. Horror is the most experimental of all literary and film genres. Horror thematically always deals with the nature of reality and how our perspective on reality is wrong, and we should instead adopt the perspective of the monster. The monster is the moral centre of the horror story because the monster represents the truth of the world.

My old Pink Floyd t-shirt with the cover of the album Wish You Were Here on it: two men shaking hands, while one of them is on fire.

When the virus came, we were not ready.

Horror. It slides long and slow and languorous over my tongue.

As a bonus, Ball reads from his collection, The Lightning of Possible Storms, and talks about its narrative structure in the following video:

Jonathan Ball is the author of eight books, including Ex Machina, Clockfire, and The National Gallery. He lives in Winnipeg and has won many awards, including a Manitoba Book Award for Most Promising Manitoba Writer. He hosts Writing the Wrong Way, the podcast for writers who strive to be bold and readers who crave something new. Visit him at www.jonathanball.com.