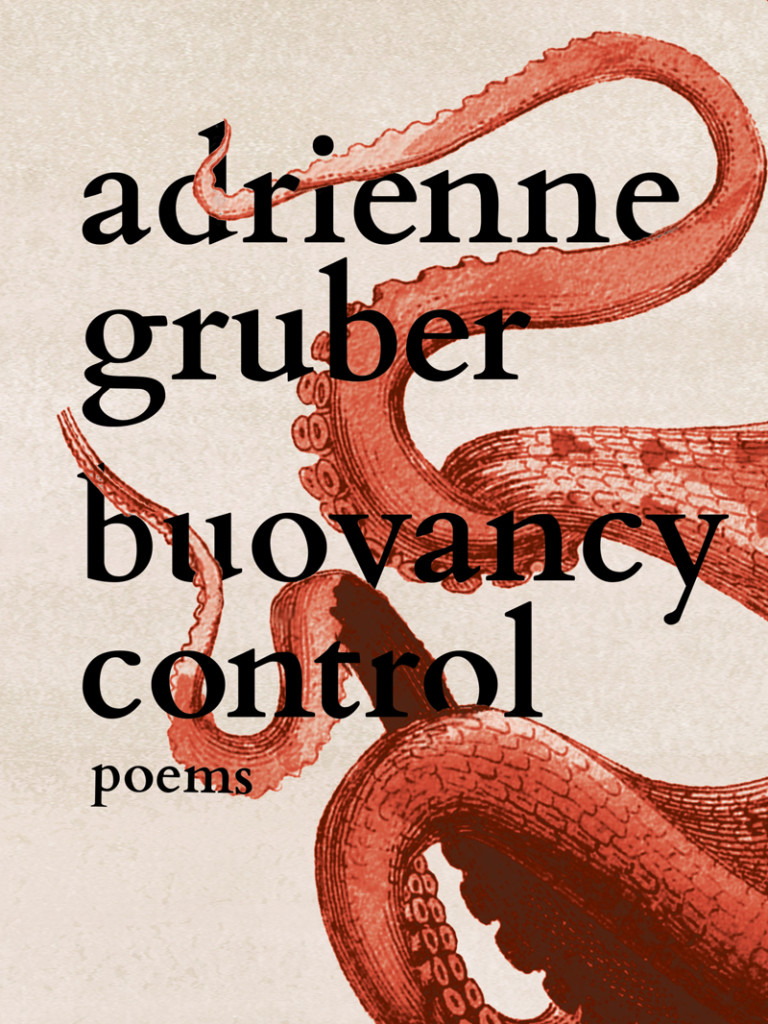 Adrienne Gruber’s latest book, Buoyancy Control, takes us into watery depths in order to look at our own identities. Described as fierce, ecstatic, and not for the faint of heart, Buoyancy Control has been named a 49th Shelf Most Anticipated Spring 2016 Poetry Selection, and is also a CBC Books Spring 2016 Books Preview Selection.

Buoyancy Control, the latest collection of poems from Vancouverite Adrienne Gruber, presents a fascinating culmination of land and sea, mind and body, in linguistic form. Metaphors of oceans, lakes, and other bodies of water (as well as the creatures that inhabit those spaces), swim and swirl their way through Gruber’s languid poems, which are divided into two evocative sections that explore themes of sexuality, sexual identity, and queerness, while confronting the feelings of loss and longing found in relationships, and the chance glimpse into a new life, while still recovering from a painfully failed connection.

Buoyancy Control is an honest, at times humorous, and revealing look inside the mind and body of a woman manoeuvring through experiences of longing, loss, and the fluidity of sexual identity, presented in a powerfully feminist and unapologetic poetic voice, from one of Canada’s most promising young writers.

BookThug intern Stacey Seymour sat down with Adrienne to talk about Buoyancy Control and Adrienne’s experience as a writer. A brief excerpt from the book follows the interview.

Stacey Seymour: What’s one thing you want to tell readers about Buoyancy Control?

Adrienne Gruber: Don’t be intimidated by the sexy sea creatures. They’re more scared of you than you are of them.

SS: What one word embodies Buoyancy Control for you and why?

Buoyancy Control is about identity; sexual, queer and personal. It’s about the fluidity of self. The organisms and aquatic life that appear in the book are also fluid, in movement and form, in sexuality and mating, in how they protect themselves from predators and survive. Even those poems that take place on land are constantly in flux, via road trips or internal struggle. There are poems that speak to the fluidity in relationships, how we mirror lovers and partners. There are poems that speak to nomadic tendencies. This book is an octopus, morphing and camouflaging and mimicking. Each poem is a weird undulating tentacle.

SS: What are the most rewarding and most challenging aspects about writing for you?

AG: I get a kind of ethereal high from writing the first draft of a poem, particularly when it comes quickly. The probability of that high is pretty much what keeps me writing poems. The challenging part comes a few days, months or years later when I am trying to make the poem achieve its full potential. This is the gritty, ugly part of writing for me, which usually involves a lot of swearing and cookies. But as I revise, I can see each layer of a poem in its complexity. I begin to see what a piece can actually do and that’s incredibly satisfying

SS: What song is definitely on your writing playlist?

AG: Likely something by Raffi, in order to keep my kids occupied. In the past it was “Dead Already” from the American Beauty score by Thomas Newman.

SS: What’s the next title on your reading list right now?

AG: I have about ten books I picked up while on my recent book tour in Ontario, five are BookThug titles from the spring launch. I have them all in a stack that I look at longingly throughout the day while I’m playing Duplo and dressing up like a fairy with my three-year-old (which, admittedly, is awesome too). I’m about to dive into Settler Education by Laurie D. Graham after having finished Soraya Peerbaye’s Tell: poems for a girlhood, which I inhaled in a night and is so hauntingly beautiful I can hardly stand it.

Adrienne Gruber is the author of the poetry collection This is the Nightmare (2008; shortlisted for the Robert Kroetsch Award for Innovative Poetry) and three chapbooks: Intertidal Zones (2014), Mimic (2012; winner of a bpNichol Chapbook Award), and Everything Water (2011). Her work has appeared in numerous literary magazines, including Grain, Event, Arc Poetry Magazine, Poetry is Dead, and Plentitude. She has been a finalist for the CBC Literary Awards in poetry, Descant’s Winston Collins Best Canadian Poem Contest, and twice for Arc’s Poem of the Year Contest. Her poem “Gestational Trail” was awarded first prize in The Antigonish Review’s Great Blue Heron Poetry Contest in 2015. Gruber lives in Vancouver with her partner Dennis and their two daughters. Her new book, Buoyancy Control, is available now from BookThug. Learn more at http://adriennegruber.wordpress.com.