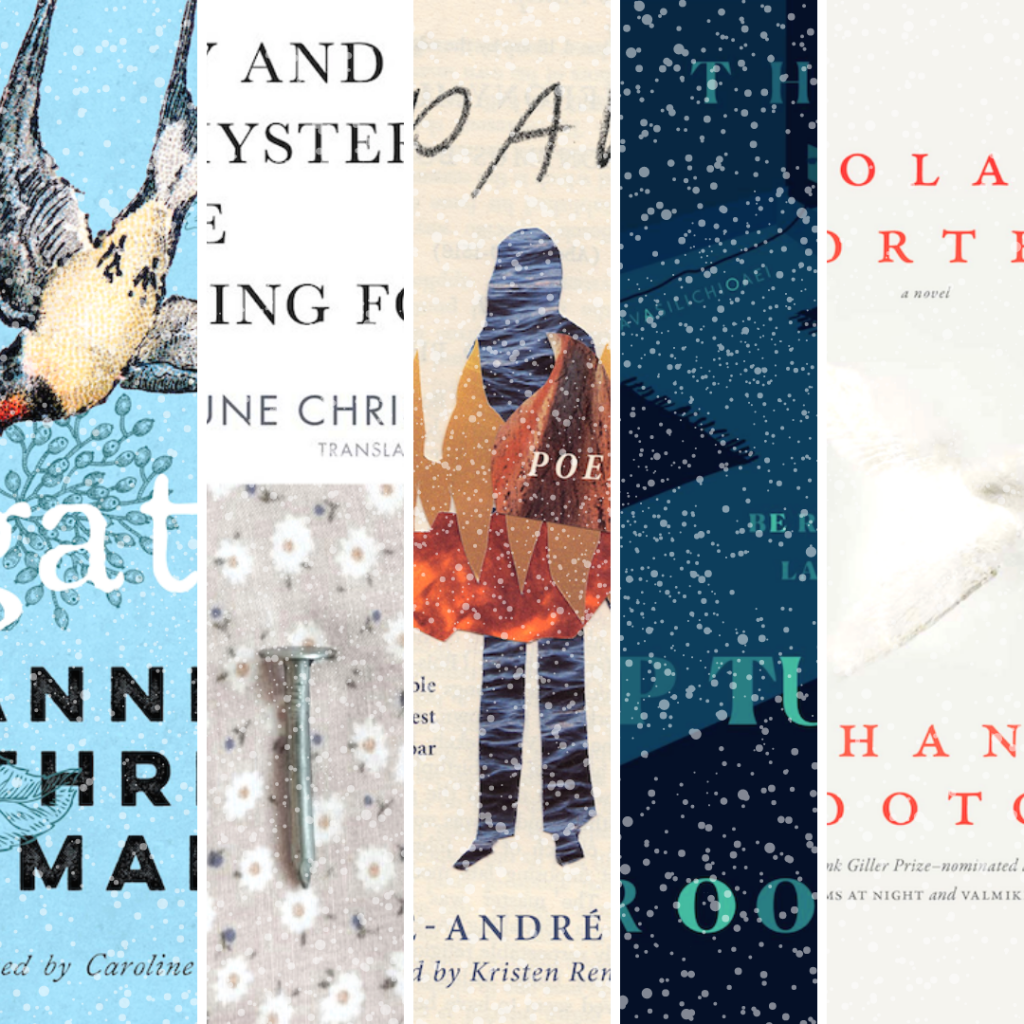 Today, our holiday reading wish list series continues, this time with five books that offer us a port in the proverbial snowstorm. These titles are evergreen: they thrive in the sub-zero worlds they exist in. However you’d prefer to escape the cold—“feel-good” fiction, lyric poetry, psychological thriller… we could continue, but we won’t—it’s safe to say we’ve got you covered. Perhaps in more ways than one. Any or all of these books would make a perfect gift for the book lover on your holiday shopping list.

As a reminder, all Book*hug Press titles are 25% off until December 23rd, and as a bonus, we’re offering free shipping within Canada on orders over $50.00. If you feel especially spoiled for choice—and/or if you’re in a giving mood—we have more good news: we’re also offering a selection of holiday bundles. Whatever and however you celebrate, we recommend shopping early to ensure your books arrive on time (and so you have something to look forward to on Monday, that cruel arbiter of happiness). Happy holidays!

Set in 1940s Paris, and translated from the Danish by Caroline Waight, this bittersweet international bestselling debut novel has sold in over twenty-three territories. In it, a psychiatrist is counting down toward his upcoming retirement. His social life consists of brief conversations with his meticulous secretary, Madame Surrugue, until one day when a young German woman called Agatha arrives and demands to see him. The two embark upon a course of therapy together, and the doctor soon realizes that underneath Agatha’s fragile exterior is a strong and fascinating woman. Slowly but surely, their sessions force him to confront his fear of true intimacy outside the clinic. As author Catherine Bush writes, “In Agatha, no one is too old or desiccated to see newly.”

“Agatha is a seductive tale, pleasingly spare and evocative,” writes Martha Baillie, author of author of If Clara and The Search for Heinrich Schlögel. “Told with tenderness and humour, it invites readers to believe that the broken can heal the broken, that doctors and patients may learn from each other, if both dare to risk being fully seen and truly come to know themselves.”

Fanny and the Mystery in the Grieving Forest by Rune Christiansen, Translated by Kari Dickson

Written by Rune Christiansen, one of Norway’s most exciting literary talents, and masterfully translated by Kari Dickson, Fanny and the Mystery in the Grieving Forest is a beautiful, poetic portrait of grief, friendship, independence, and transgression. The novel follows Fanny, a 17-year-old high school senior, who has lost both her parents in a car accident. She passes the days performing her unchanging routine: going to school, maintaining the house, chopping and stacking wood, and keeping the weeds at bay. As Fanny grieves and attempts to come to terms with the sad circumstances of her life, a fairy tale-like world full of new possibilities begins to emerge around her.

Spawn is a braided collection of brief, untitled poems, a coming-of-age lyric set in the Mashteuiatsh Reserve on the shores of Lake Piekuakami (Saint-Jean) in Quebec. Marie-Andrée Gill’s young avatar reaches new levels on Nintendo, stays up too late online, wakes to her period on class photo day, and carves her lovers’ names into every surface imaginable. Spawn is threaded with the speaker’s desires, her searching: for fresh water that “takes the edge off,” for a “habitable word,” for sex. Like the life cycle of the ouananiche that frames this collection, the speaker’s journey is cyclical; immersed in teenage moments of confusion and life on the reserve, she retraces her scars to let in what light she can, and perhaps in the end discover what to make of herself, her voice and her identity.

“Marie-Andrée Gill’s Spawn is an epic journey that follows the ouananiche in their steadfast ability to hold: rigid, shimmering, hardened to the frigid waters of winter, in all of its capacities of and for whiteness,” writes award-winning author Joshua Whitehead. “Gill’s narrator weaves through their home in Mashteuiatsh and nooks in digital worlds, broken worlds, beautiful worlds, all the while bleeding temporalities into a gallant orality where the northern lights hum with the magnetic fields of Nintendo. Here, the land makes love with the narrator and itself to teach honestly what it means to be held, caressed, and cared for in the most intimate of fashions so that the poems can summon into being a spawn of its own wonder-working dreams: ‘a woman risen up from all these winter worlds, heaped with ice [and] ready to start again.’”

The Neptune Room by Bertrand Laverdure, Translated by Oana Avasilichioaei

The Neptune Room pieces together life’s terrible but tender metamorphosis, opening a door onto a universe of beauty, mourning, and renewal. Alone and suffering from an incurable disease, eleven-year-old Sandrine finds companionship in her doctor, Tiresias, who morphologically changes sex in unpredictable ways (and seemingly without anyone noticing). Set in a winter-struck Montreal, the novel is a transformational tale about the mysteries of identity and the power dynamics that surround it. Author, essayist, and journalist Yvon Paré calls The Neptune Room a “meditative book on the great adventure of the present, being, time, the limitations of medicine, and the heroism of those accompanying the young who leave before exploring the borders of the adult world.”

Polar Vortex is a story of secrets, deceptions, and revenge that follows Priya and Alexandra, a couple who have moved from the city to a picturesque countryside town. What Alex doesn’t know is that, in moving, Priya is running from her past—from a fraught relationship with an old friend, Prakash, who pursued her for many years, both online and off. Time has passed, however, and Priya, confident that her ties to Prakash have been successfully severed, decides it’s once more safe to establish an online presence. In no time, Prakash finds Priya and contacts her. Impulsively, inexplicably, Priya invites him to visit her and Alex in the country, without ever having come clean with Alex about their relationship—­or its tumultuous end. Prakash’s reentry into Priya’s life reveals cracks in her and Alex’s relationship and brings into question Priya’s true intentions.

“Shani Mootoo’s intimate new novel suspends us in the vortex between acts of betrayal and acts of love,” writes Madeleine Thien, Scotiabank Giller Prize-winning author of Do Not Say We Have Nothing. Author Joe Meno calls the book “an intimate and starkly honest examination of the complexities of sexual identity, lust, shame, regret, and how we, no matter where we come from or how we identify, are at our most complicated when it comes to the whims and failings of the human heart.” Polar Vortex was shortlisted for the 2020 Scotiabank Giller Prize.