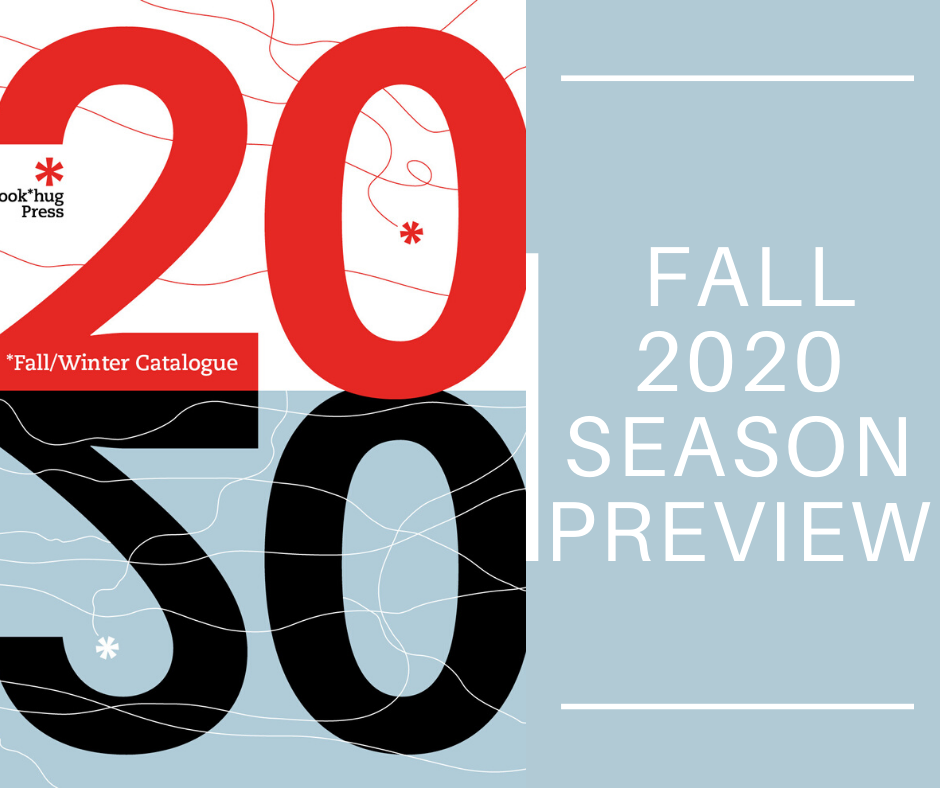 Today, we’re excited to unveil our forthcoming Fall 2020 season! Autumn may seem far away, especially given the recent heat wave, but if the pandemic has taught us anything—besides how to bake sourdough bread—it’s that change happens quickly. In this case, change is good: it means that you get to read about some amazing new books (and pre-order them, if you’re interested). Whether you prefer literary fiction, creative nonfiction, poetry, or drama—or are partial to all four—this season’s selections won’t disappoint. Get ready to take your sweaters out of storage. 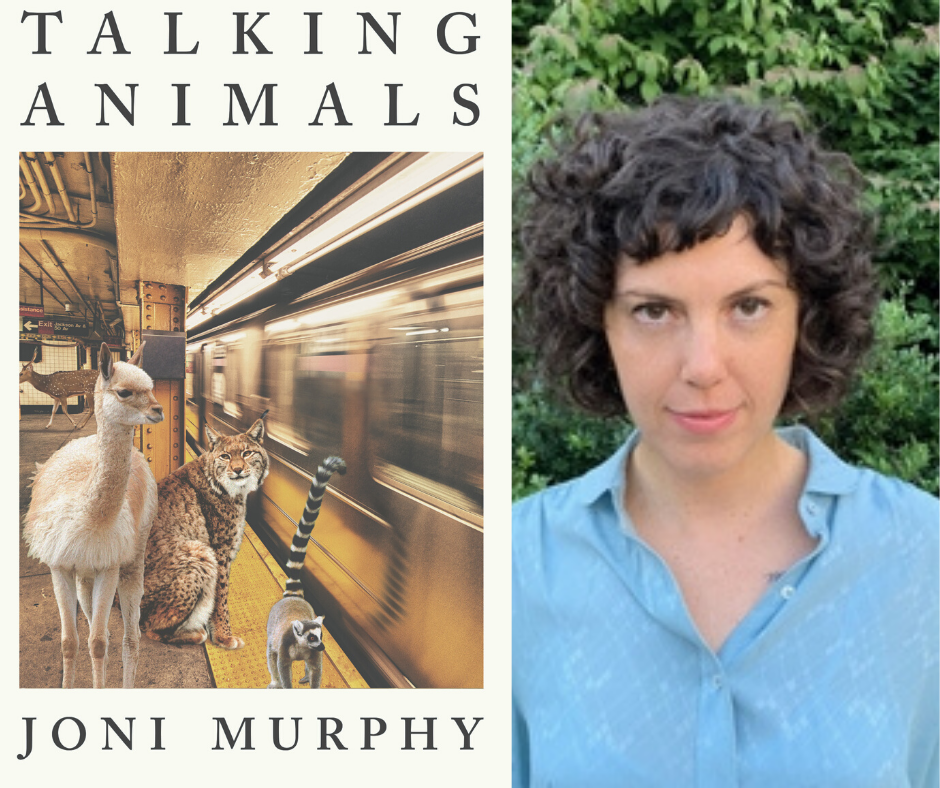 We’re not mathematicians, but if you loved Joni Murphy’s 2016 debut novel Double Teenage, there’s a good chance that you’ll love Talking Animals. Set in New York City nowish, Talking Animals is an urgent allegory about friendship, art, and the elemental struggle to change one’s life under the low ceiling of capitalism. A fable for our times, it imagines an all-animal world with all-too-familiar afflictions: soul-crushing jobs, polluted oceans, and a creeping sense of doom, to name just a few. Celebrated author Chris Kraus writes that “Joni Murphy’s inventive and beautiful allegory depicts a city enmeshed in climate collapse, blinded to the signs of its imminent destruction by petty hatreds and monstrous greed: that is, the world we are living in now.” Author Patty Yumi Cottrell calls Talking Animals “a wild love letter to all bureaucrats, academics, and alpacas of the Anthropocene. Joni Murphy, rightful zookeeper-heir to Kafka’s animal kingdom, speaks for us all.” 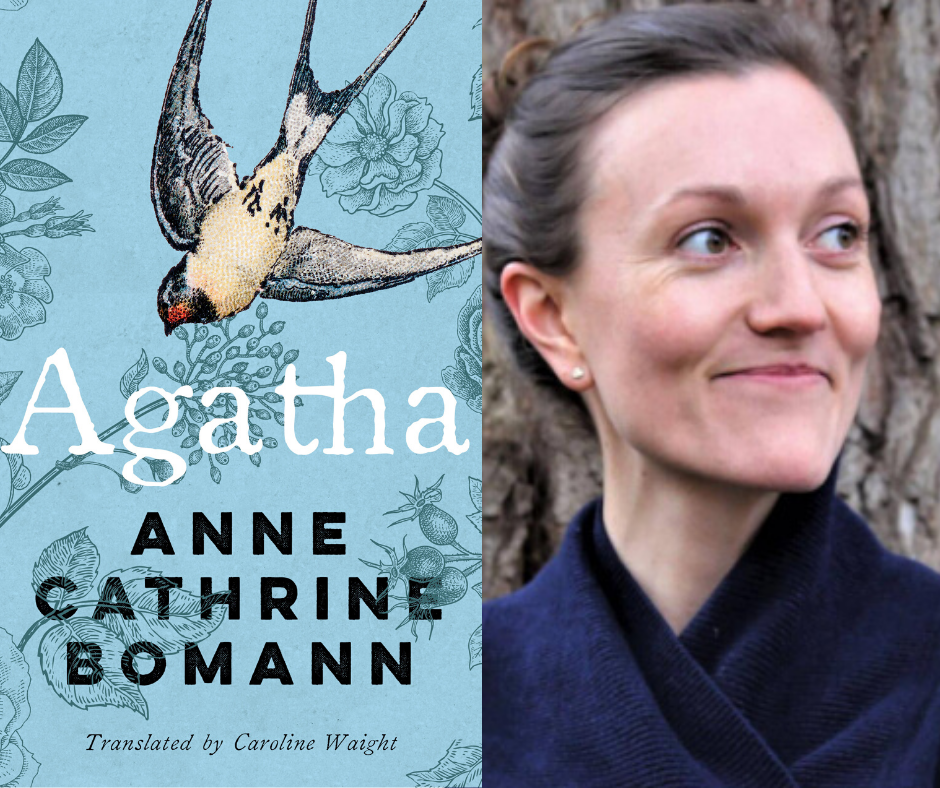 Agatha by Anne Cathrine Bomann, Translated from the Danish by Caroline Waight
(On Sale September 29)

Agatha, the debut novel by Danish author Anne Cathrine Bomann, is an international bestseller that has sold in twenty-three territories. Set in 1940s Paris, this bittersweet novel examines the relationship between a young German woman—the titular Agatha—and her psychiatrist, who is counting down the days toward his upcoming retirement. The two embark upon a course of therapy together, a process that forces the doctor to confront his fear of true intimacy outside the clinic. But is it too late to reconsider your existence as a seventy-one-year-old?

The Irish Times calls Agatha “charming and funny,” and the Frankfurter Allgemeine Zeitung calls it “amazing.” Martha Baillie, author of If Clara and The Search for Heinrich Schlögel, writes that Agatha “invites readers to believe that the broken can heal the broken, that doctors and patients may learn from each other, if both dare to risk being fully seen and truly come to know themselves.”

(Fun facts: Anne Cathrine Bomann is also a working psychologist who lives in Copenhagen with her philosopher partner and their dog, Camus. She played table tennis for Denmark and won the national championship twelve times. She also played abroad for one season for French Fontenay-sous-Bois, during which time she lived in Paris on Rue des Rosettes no. 9. This location found its way into her beautiful debut novel as the address where Agatha lives.) 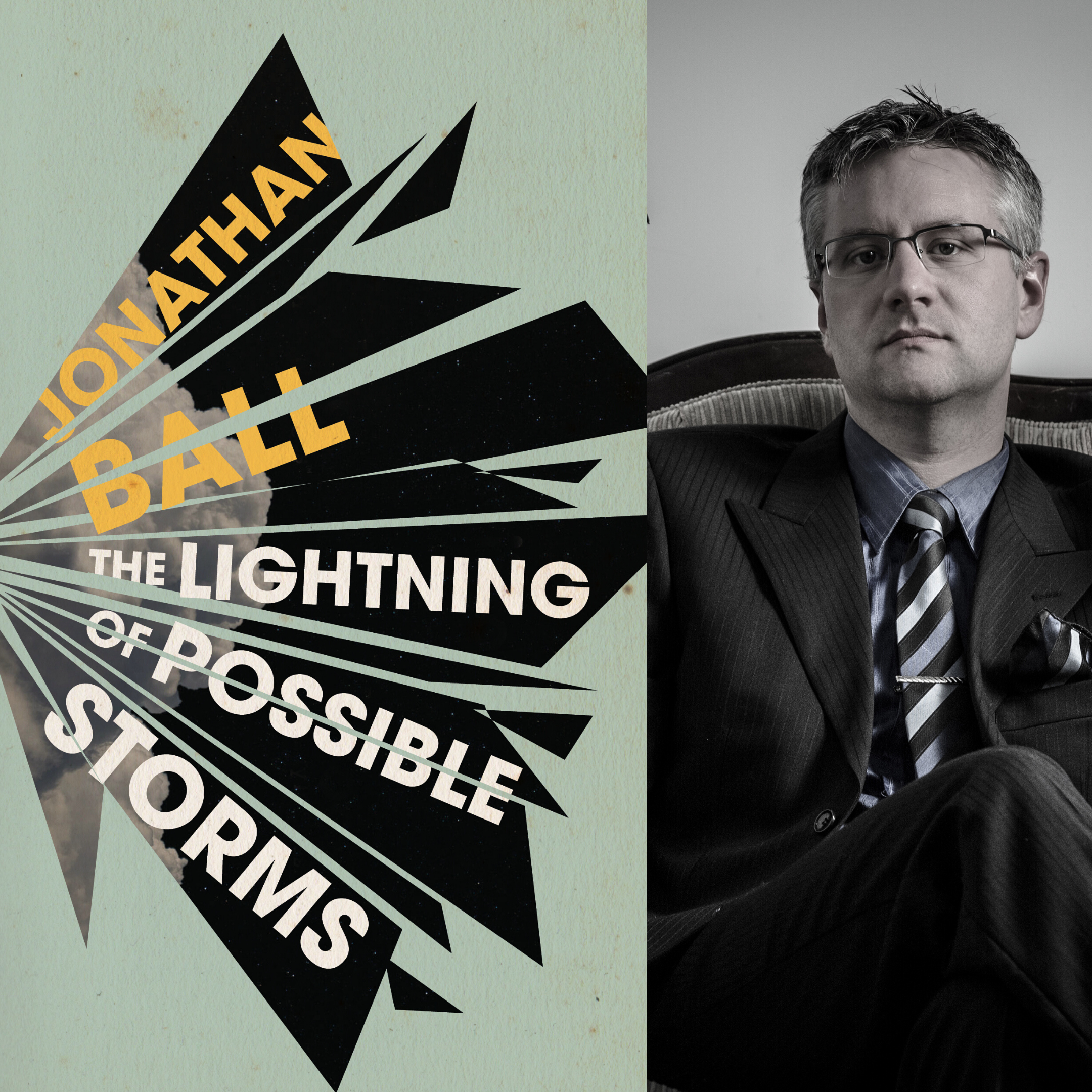 Aleya’s world starts to unravel after a café customer leaves behind a collection of short stories.urprised and disturbed to discover that it has been dedicated to her, Aleya delves into the strange book. The more Aleya reads, the deeper she sinks into the mysterious writer’s work, and the less real the world around her seems. Soon, she’s overwhelmed as a new, more terrifying existence takes hold. Jonathan Ball’s first work of short fiction (he’s the author of eight other books, including Ex Machina), is both scary and scarily funny, blending horror and humour, doom and light. 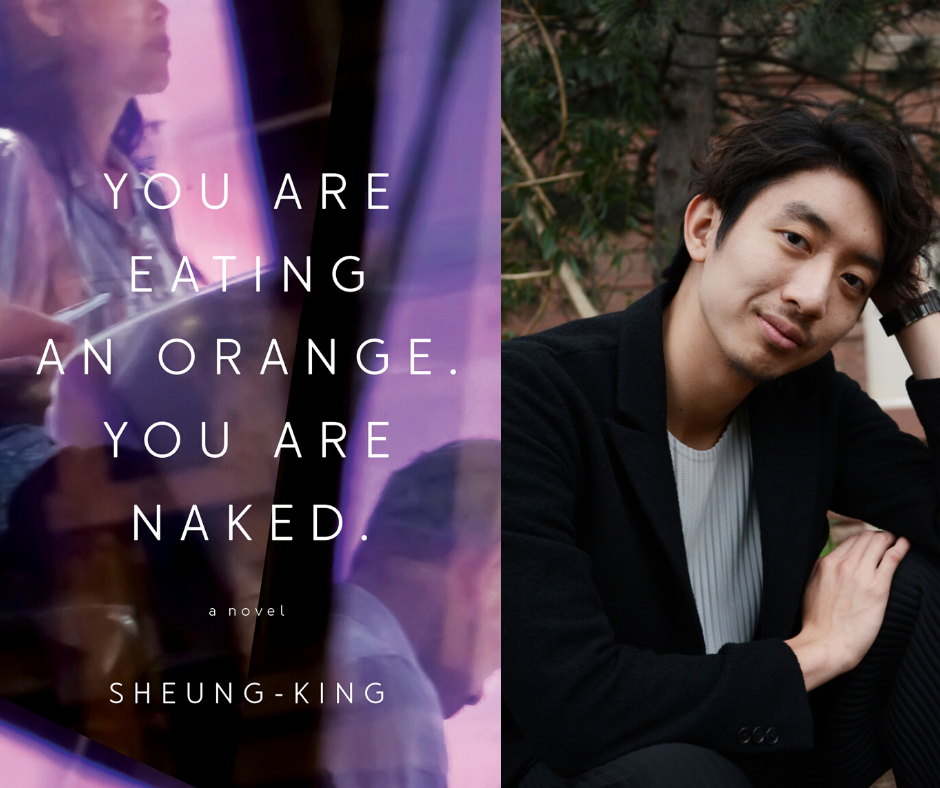 You Are Eating an Orange. You Are Naked. by Sheung-King
(On Sale October 27)

Following in the surreal, atmospheric footsteps of Haruki Murakami and Wong Kar-wai, Sheung-King’s debut novel announces the arrival of a bold new voice in Asian-Canadian literature. You Are Eating an Orange. You Are Naked. is an intimate story of memory and longing that follows two young lovers on their frequent travels abroad to Hong Kong, Macau, Prague, and Tokyo. In hotel rooms and restaurants, the lovers swap folk tales, saying everything and nothing to each other. “Sheung-King has written a wonderfully unexpected and maverick love story but also a novel of ideas,” writes Kyo Maclear, author of Birds Art Life: A Year of Observation. She calls You Are Eating an Orange. You Are Naked. “enchanting, funny, and a joy to read.” 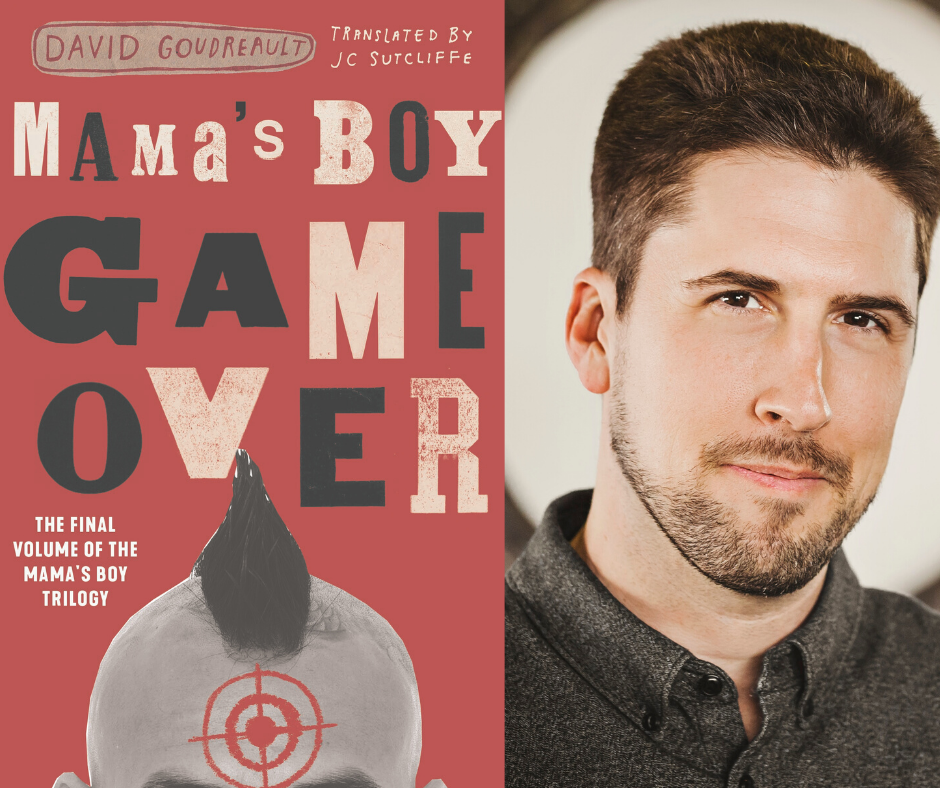 Mama’s Boy: Game Over by David Goudreault, Translated from the French by JC Sutcliffe
(On Sale November 10)

Mama’s Boy: Game Over is the third—and final—installment of David Goudreault’s bestselling La bête trilogy. In this book, the titular Mama’s Boy has been transferred from prison to a psychiatric hospital, but his stay at the latter is short-lived: he escapes, then goes on the run in Montreal, hiding in plain sight, no longer committed to an institution but to a long-awaited reunion with his estranged mother. Mama’s Boy’s final journey is a complicated, desperate bid for freedom, love, and family. Readers of Mama’s Boy and Mama’s Boy: Behind Bars can look forward to a thrilling, poignant conclusion to the bestselling series. “David Goudreault will captivate you from the first line,” writes Kim Thúy, author of Vi and Ru. 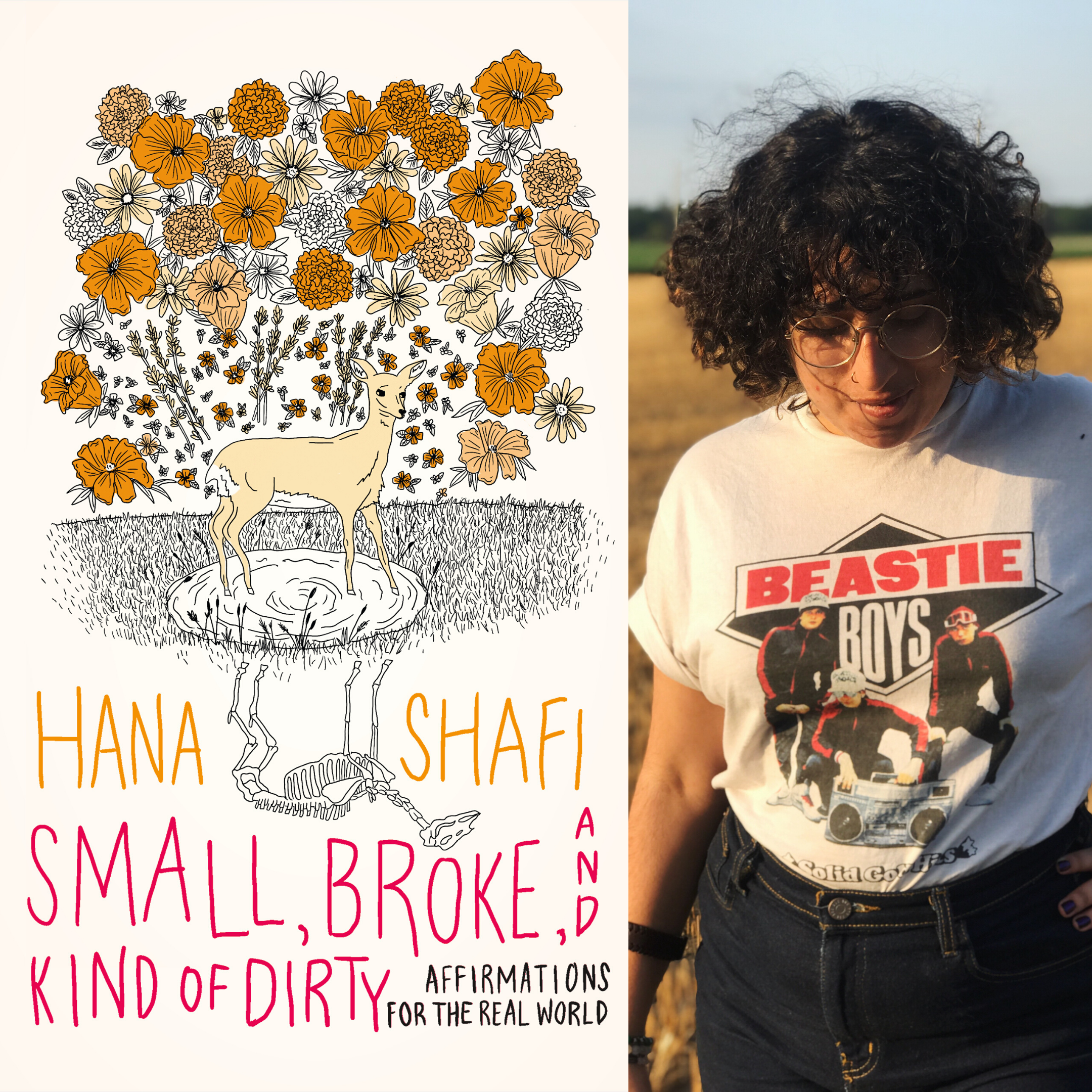 Small, Broke, and Kind of Dirty: Affirmations for the Real World by Hana Shafi
(On Sale September 22)

Small, Broke, and Kind of Dirty is the highly anticipated follow-up to Shafi’s 2018 poetic debut, It Begins with the Body. Built around art from Shafi’s (aka Frizz Kid’s) popular online affirmation series, the essays in this collection focus on our common and never-ending journey of self-discovery. Shafi explores the ways in which the world can all too often wear us down, and reminds us to remember our worth, even when it’s hard to do so. Drawing on her experience as a millennial woman of colour, and writing with humour and a healthy dose of irreverence, Shafi delves into body politics and pop culture, racism and feminism, friendship and allyship. “With her brash wit and honesty on display, this is the book that Frizz Kid/Hana Shafi fans (and new fans) have been waiting for,” writes Vivek Shraya, author of The Subtweet and I’m Afraid of Men. Comedian Anasimone George calls Small, Broke, and Kind of Dirty “everything I wish I had read growing up as an awkward kid. If you’ve ever wanted to experience the women’s ritual of being affirmed in a public restroom, this is your book.” 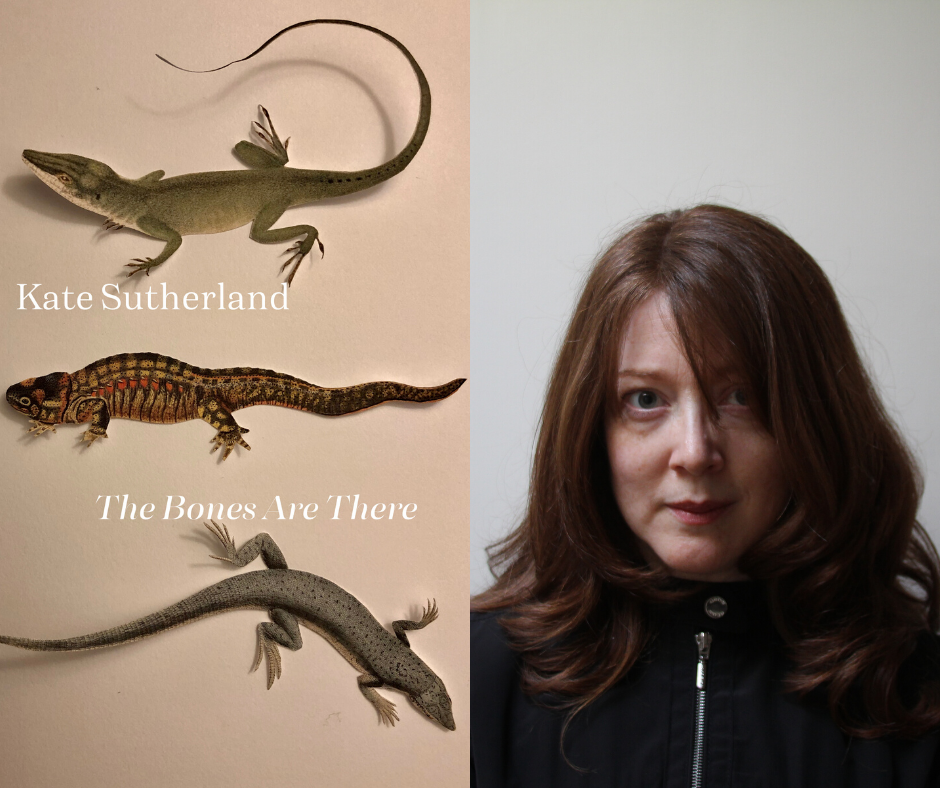 The Bones Are There by Kate Sutherland
(On Sale October 13)

Kate Sutherland’s fourth book, The Bones Are There, is poetry by way of collage: pieced-together excerpts from travellers’ journals, ships’ logs, textbooks and manuals, individual testimony, even fairy and folk tales that tell stories of extinction—of various species, and of our own understanding of, and culpability within, its process. Across its three sections, Sutherland draws identifiable connections between various animal extinctions and human legacies of imperialism, colonialism, capitalism, and misogyny, charting the ways in which they juxtapose one another while impacting the natural order of things.

The Bones are There is the follow-up to Sutherland’s 2016 collection How to Draw a Rhinoceros, which treads similar—and still-relevant—creative ground. The Saskatoon StarPhoenix calls her work “something akin to found [poetry] with a distinctly modern political bent.” 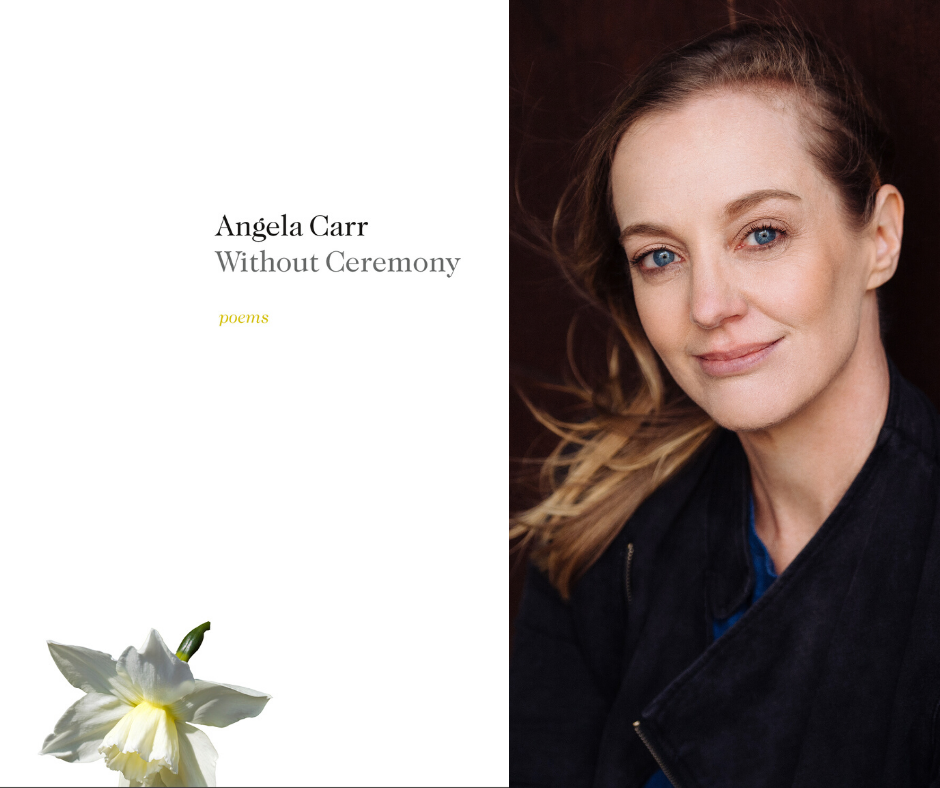 Without Ceremony by Angela Carr
(On Sale October 15)

Centred on the everyday, and crafted without preamble or pretension, the poems in Without Ceremony are a literary pastiche—a thematic mosaic not unlike tracks on an album. Amidst a timeless cast of characters from Lucretius and Eva Hesse to Joan Mitchell and St. Augustine, Carr illuminates what it means to truly know something and questions how certain knowledge becomes valued over others. Without Ceremony spotlights the gendered division of ideas and the inherent strength of language to harm and oppress, as well as elevate.

Without Ceremony is Carr’s fourth poetry collection. Her earlier books include Here in There (2014; shortlisted for the A. M. Klein Prize for Poetry), The Rose Concordance (2009), and a translation of Chantal Neveu’s collection, Coït. 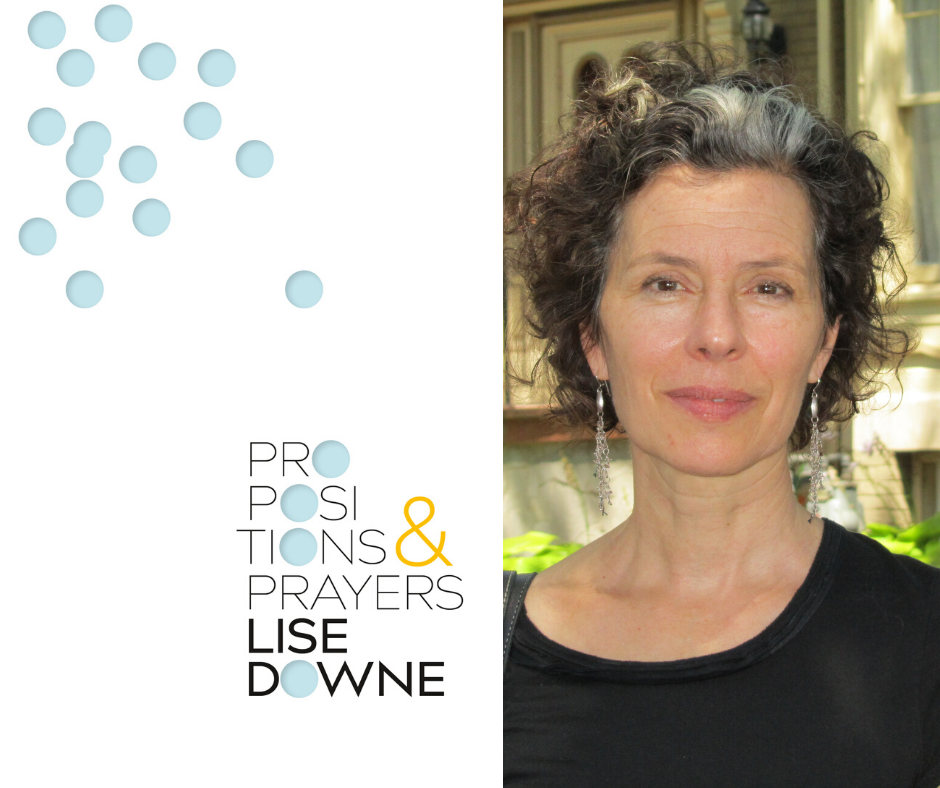 Propositions and Prayers by Lise Downe
(On Sale November 17)

Lise Downe’s Propositions and Prayers blurs the lines between our inner and outer selves. The book—which is the follow-up to her 2011 collection, This Way—is divided into two parts, “Propositions” and “Prayers,” both of which subvert traditional expectations of structure and style. “To read Lise Downe’s Propositions and Prayers is to find oneself in the company of a mind both congenial and disquieted,” writes Mark Truscott, author of Branches. “Her improvisations—centrifugal, probing, and anchored in the reality of a scarcity of time off work and notes ‘hand-marked “Urgent”’—are motivated by an integrity of intellect and emotion.” Margaret Christakos, author of Her Paraphernalia, writes that the book is “enormously perfect for both three a.m. staring into catastrophe and seven a.m. rising to the glinting secular benediction of getting-on-with-it.” 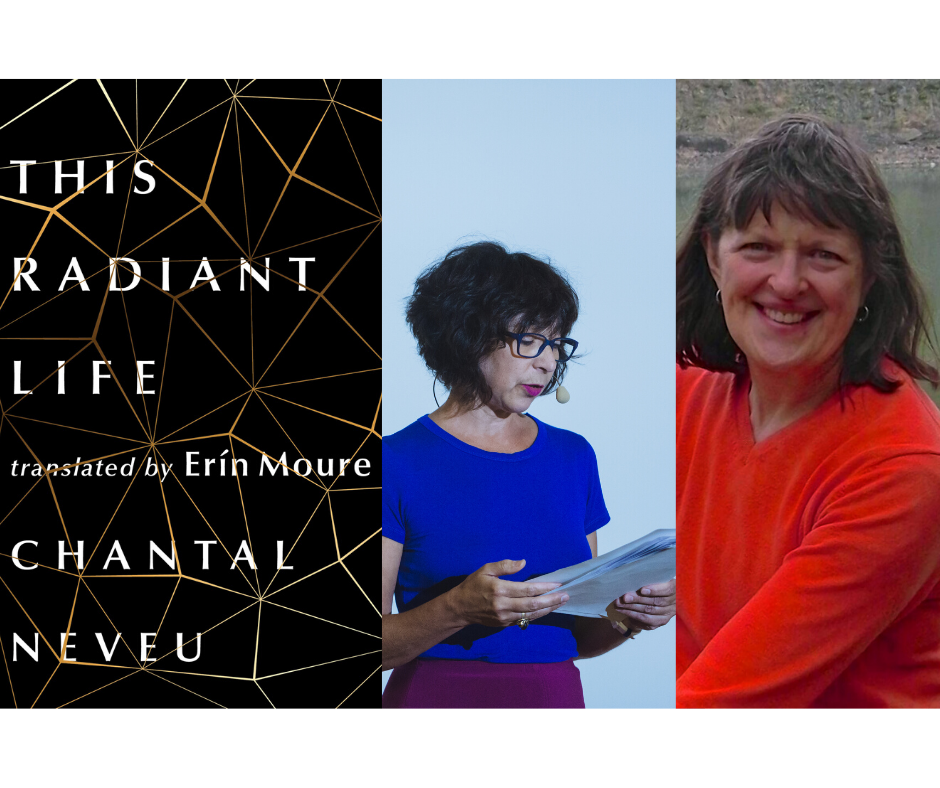 This Radiant Life by Chantal Neveu, Translated from the French by Erín Moure
(On Sale November 19)

In praise of this stunning long poem by Chantal Neveu, translated by Erín Moure, celebrated poet Caroline Bergvall writes, “This Radiant Life strikes a resonant chord with its sparse minimalism. This indexical poetry records private activities, travels, daily living, details the body’s nervous system alongside sudden explosions of brutal events and media frameworks. A capacity for complexity through elliptical building blocks. Violence side by side with train journeys. Collective brutality side by side with personal intimacy or physiological flow. Very few words are hosted on each of these aerated pages. Turning the page in itself confirms the implicit need for breathing space, or for trying to make some sense of it all, while being carried along the currents of one’s own time. Everything intermingled. Inescapable as the butterfly effect. Words work like knots of awareness down the rope of lines.” 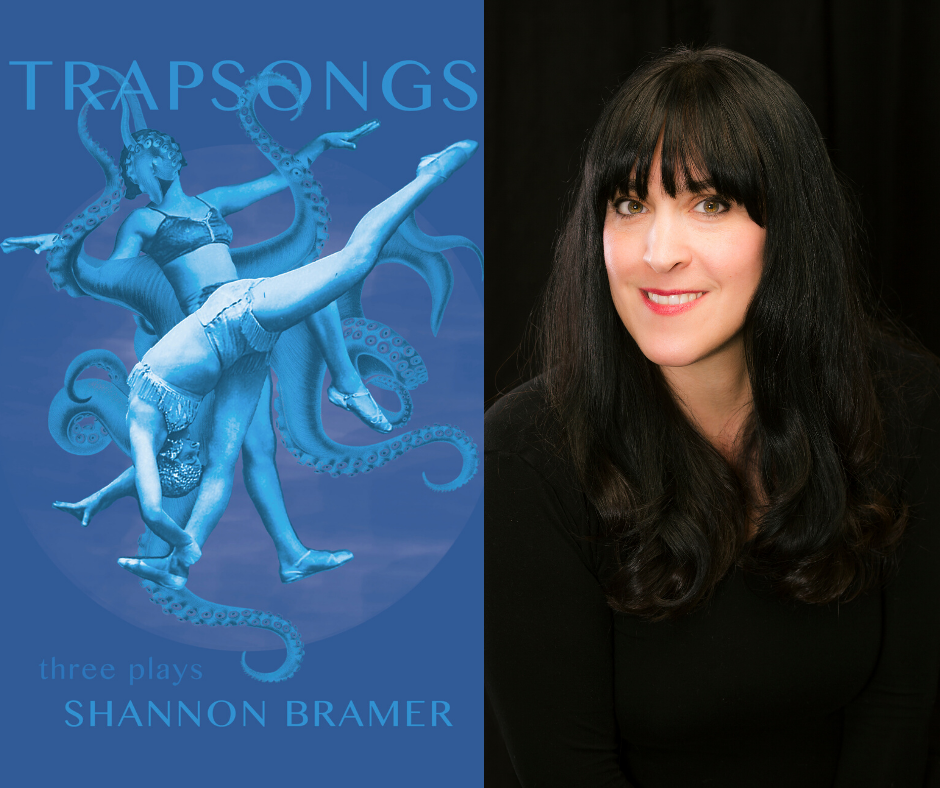 From playwright and poet Shannon Bramer (author of Precious Energy) comes Trapsongs, a collection of three dark comedies that navigate the realm of the surreal and absurd. The first play, Monarita, examines the complicated relationship between Mona—a frazzled new mother—and Rita, her estranged-but-beloved/beloved-but-estranged friend. In The Collectors, a woman is hounded by spectral collection agents, and is forced to confront not only her debt but her isolation. The third play, The Hungriest Woman in the World, is a tragicomic journey into the world of theatre as experienced by Aimee, a former artist. Trapsongs is by turns comedic, grotesque, and profane, but is all the while a tender exploration of the human condition in all its hilarious and humbling glory.