“Deep down, they need their solitude”: In Conversation with Anita Anand | Book*hug Press 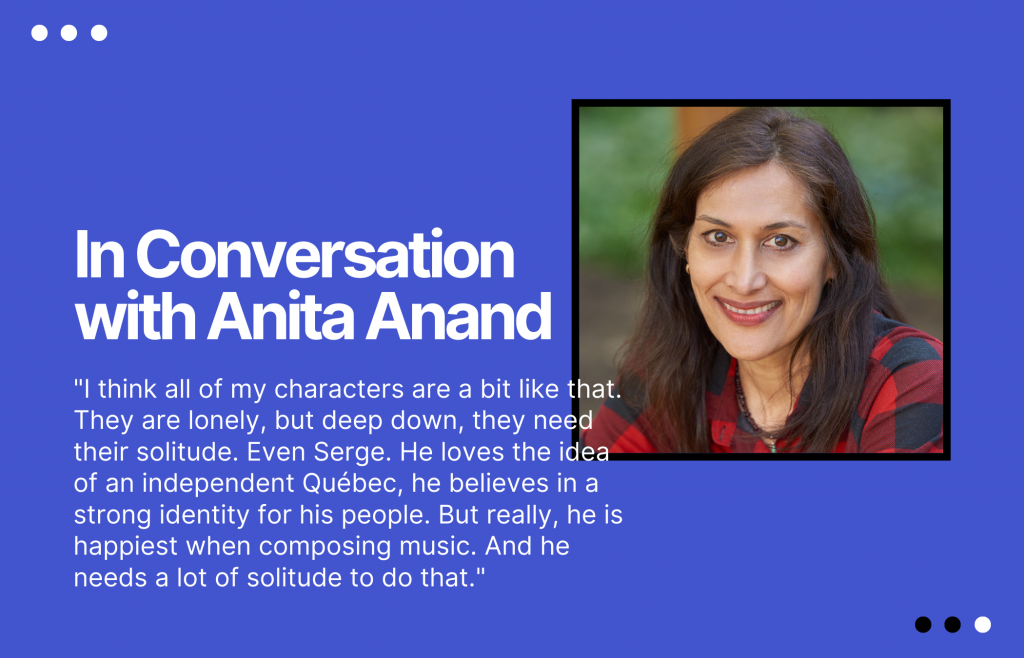 Today, we are in conversation with Anita Anand, author of A Convergence of Solitudes, a novel which deftly weaves together the stories of six characters, and the cultural and political contexts which define them.

Teenage lovers Sunil and Hima defy taboos to come together as India divides in two. They traverse the world to Montreal and raise a family, but Sunil shows symptoms of schizophrenia, shattering their new-found peace. As a teenager, their daughter Rani becomes obsessed with Québécois supergroup Sensibilité —and the band’s charismatic, nationalistic frontman, Serge—connecting her to the province’s struggle for cultural freedom. When a chance encounter leads Rani to babysit Mélanie, Serge’s adopted daughter from Vietnam, she fleetingly enters his inner circle.

Read on for Anand’s thoughts on exile, misunderstandings, the novel as a literary form, and more.

AA: It is a good question, but I don’t really intend anything when I write. First it just spills out, then I rewrite and expand, editors help me figure out the structure, and finally, readers tell me what I’ve written about.

But I can tell you that I am always thinking about misunderstandings, and I know this finds its way into my writing. I am often struck by how hard it is for people to understand each other’s differences on a personal basis, why some people want to be alone or go to bed at dawn. Or  another level, they don’t get each other’s culture or politics, or they feel threatened by minorities. It seems to me too that the few people who reflect on rather than react to differences are shunted to the margins too; they are considered weirdos in their own right.

B*H: In what ways is the book a response to Hugh MacLennan’s 1945 novel Two Solitudes?

AA: I think the dominant message is still true: Anglophones and Francophones still live in their own separate worlds and communication between the two groups is quite poor. Within those two solitudes there are others, with their own sometimes overlapping issues. I just made some room for those others. My book wasn’t written as a response to MacLennan’s book; it is more like an update, and a variation on the theme.

B*H: Why were you drawn to the album as a structural device for the novel?

AA: Well, the book features a lot of music, and even a seventies band that makes double albums. And some parts of the book, it seems to me, fit together like songs on an album. But I should tell you that structure does not come easily to me. I had a lot of help figuring this out, not only from my editor but from my husband, who is a musician and a composer.

B*H: Sunil’s schizophrenia isolates him from others, leaving him alone in his beliefs and perceptions. Why did you choose to explore mental illness as part of a novel about identity and loneliness?

AA: Again, I don’t choose to write about much in a conscious way. I do know that I have always wanted to highlight all the challenges new immigrants face. They don’t just face new ones. They bring their old ones with them; Sunil brings his mental illness. I was also thinking about the plight of Hima, who was never keen on immigrating to Canada. In normal circumstances, a couple who come to a new country are united in confronting their new reality. So it is even more poignant that Hima finds herself with literally no one to talk to, as she can’t even communicate with her husband anymore.

B*H: You once said, “Montreal is a really good place if you want to be in exile.” Can you elaborate on this statement in relation to the novel? Is there any comfort in exile?

AA: Oh, that would be because of the two main solitudes, English and French. You can slip in and out of them, and never commit to either, if you are the sort of person who does not want to be part of a community. I think all of my characters are a bit like that. They are lonely, but deep down, they need their solitude. Even Serge. He loves the idea of an independent Québec, he believes in a strong identity for his people. But really, he is happiest when composing music. And he needs a lot of solitude to do that.

B*H: Your last book was a collection of short stories. How was it working in the novel form?

AA: I enjoyed having the space to explore themes, even go off on tangents, and not feel like I had to get from A to B in eight pages. I guess I still had to get from A to B, but Zsuszi Gartener told me that I could stop for ice cream sometimes. As a reader, I think short stories and slim novels are great, but they don’t feel as satisfying to me as a nice, chunky novel with different threads, and I know I am not alone.  It made me happy as I was writing, to look forward to readers enjoying the experience.

B*H: A Convergence of Solitudes features six different points of view—Hima, Sunil, Serge, Jane, Mélanie, and Rani. Which was your favourite to write? Which was the most difficult?

AA: I enjoyed writing from all of their points of view. I had no favourite. It’s like asking me who my favourite kid is!