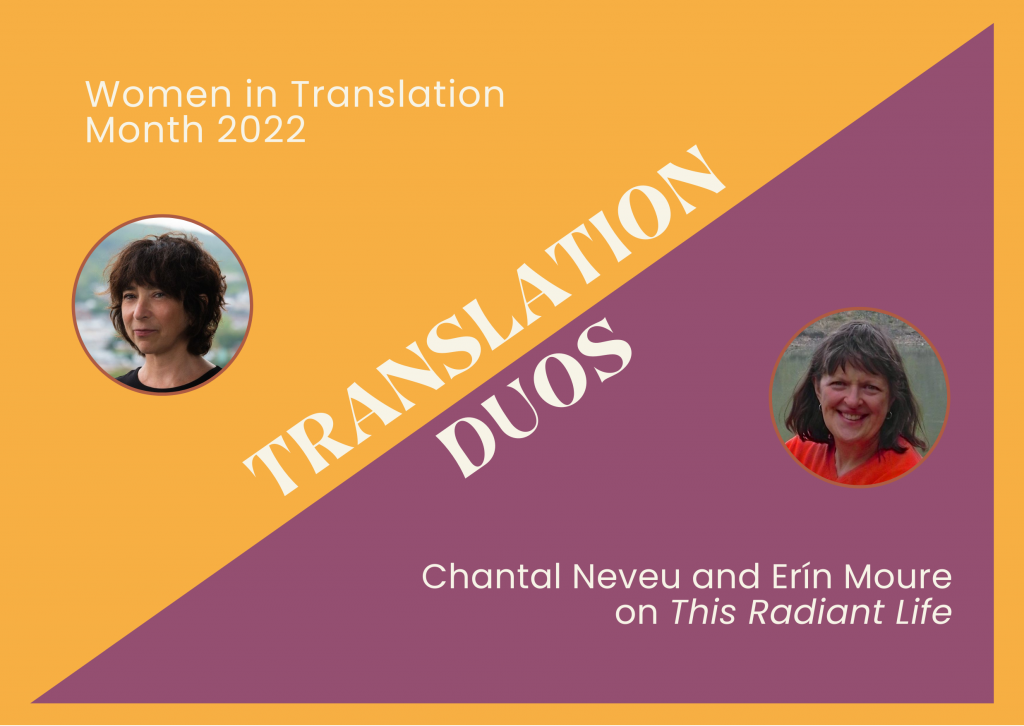 Next in our Translation Duos Series, we are featuring Chantal Neveu and Erín Moure on the Governor General’s Literary Award-winning poetry translation, This Radiant Life.

Drawing on the lexicons of science, art, and revolution, This Radiant Life forges intense and extended rhythms that invoke the elements and spaces making up our world. In its brevity and persistence, it is a material call for action, asking us to let go, even just a little bit, of our individuality in favour of mutuality, to arrive separately yet in unison at a radiance in which all living beings can thrive.

Read on for Neveu and Moure’s thoughtful and poetic musings on reading one’s own work in translation, apprenticing a text, and collaborating to hone rhythm and align motivations.

B*H: Chantal, what was it like to read your own work in a new language? Did it alter, or expand, its meaning?

CN: Reading This Radiant Life is a privileged, augmented, reiterated immersion into La vie radieuse. It’s a new physical, topological, entirely poetic, fractal, global experience, extraordinarily generative and energetic. There’s the joy at what’s similar in the new language and at what speaks anew, and in the metamorphosis — personal, human, as well as impersonal, non-human, literary as well as existential and, I daresay, biological.

In reading This Radiant Life as a book (having been close to Erín as she was writing/translating La vie radieuse), I find I can explore deeply once again the subtextual questions that agitate the whole project: how far apart are bodies? This ethics. This movement and influence of thought in the process of thinking itself. Presence and interrelation, the material fabric of any one language and of language itself, the provisional, reversible, and active character of words, things, emotions, and situations — via writing, this idyll.

While Erín heard and translated the power of each word of La vie radieuse, she also translated the interval between words, between lines, between pages, their adjacency, their alliance, the silence, the movement of the long continuum and the multidimensional radiance of meaning— of meanings. New connections, vibrations, and sensations — resonance — arise.

From here on in, the two books generate separately and together what la vie radieuse can be, this vie, This Radiant Life.

B*H: Erín, in translating This Radiant Life what did you learn about the French language, Quebecois literature, and/or the art of translation?

EM: I read French not just as a French speaker does; I read through English, through Galician too because it can’t be helped. But to turn what I read into English: I translate because something in the poeisis, in this making of the poem, intrigues me; I want to share it with my community in English. In Chantal’s book, it was the way that the minimalism of the physical text, its scarce use of the page, also activates the entire page, activates the pages beside it. It was how the seeming minimalism of expression is also a maximalization not just of but in thinking. The book brings to bear so many knowledges of the body, of the cellular tensions that we call “body” which include the mind, and the social fabric. It de-“naturalizes” the body, social as well as personal and sees both working together.

So I learn intently from the text, I listen to it, I watch it; I apprentice myself gently to it so it teaches me how to make it in English. It’s not a trip between two horizons, French and English; translation is not a ferry. It’s a ripple in language; it’s language moving in and through me (a socialized and acculturated body different from that from which the language first emerged). Or if translation is a ferry, the goal is not to get from one bank to another and goodbye to the river; it is the river, where it touches the ferry, it’s the push and pull and force of movement heading elsewhere and from elsewhere entirely, which the ferry comes to know in its wood and seams. It’s not goodbye to the river and thank you—it’s “thank you,” and hello.

B*H: Tell us about your collaboration. What did you offer one another throughout the process? How did you solve problems together? What did you most appreciate in the other?

EM: In translating there are always the challenges of making anything sound and move in a similar or parallel way to how it does in the original. I learn acutely from the work itself, listen to it… so that its language teaches me. At the same time, there are the depth charges from knowledges surfacing in the text, and to grasp these as much as possible, my conversations with Chantal were key, in order to receive and process her way in language (that kinetics). Otherwise I risk translating her way into my way—appropriating her book. It might make a nice book that way but it’s not what I want to do. I want to change myself in receiving her language, as only by doing that can I move the words/kinetics over. I emerge as an impossible person, unknown to myself. Then I know I am translating. My ears are very active.

Our conversations help me to enter her way in language, not just simply to identify or recognize la pensée (thinking, thoughts), but to engage le penser (the very act of thinking the thinking and thoughts). To translate a work whose words are depth-plunging but surface-minimal, I had to better understand Chantal’s moves in thought, her kinetics of thinking, thinking as movement not as result. In doing this, I could see that she was activating not just the words but the spaces on the page where there are no words, activating the continuity of the pages, the contiguity of recto and verso; when you read one page, already the next page is in action, coming-into-reading. That’s what I call a kinetics, it makes my body do something, I turn the page and keep reading.

So my conversations—specific, and ongoing in general, as we are friends—with Chantal were key to producing the translation, producing a translation that hums as the original does (not exactly the same of course but it’s not just a transfer of language on the page). In conversation, one’s own mind receives and learns the rhythms, thinking, the action of thinking that goes into the person’s work. Chantal shows me sources and summarizes them for me. From her, I learn the process of some of the thinking, and that helps me. I want to translate the intellect that gives rise to the “feels”.

CN: Erín and I share a taste for orality and, more broadly, we both pay attention in a haptic way to words, to their polysemous capacity, to their sonority, and to the voice that speaks, that reads, that thinks aloud, in keeping with the breath, with the rhythm and progression of what is said and thought. This complicity has been a fertile dynamic during our conversations over the years, and more specifically during our working sessions on her translation of This Radiant Life. Erín, in this case, generously offered to open up her writing process, allowing us to review the translated text together, to excavate certain words, core notes or passages.

In turn, she welcomed my sharing of the lexicographic reservoirs stemming from my multiple scriptages and from the references that infuse La vie radieuse. We were thus able to clarify my use of language and method, to shed light on certain inductions, motivations, ambitions, modes of elision or assembly, and on my artistic, scientific, and philosophical questions and associations at work in the book. I never proposed words in English. Parallel and intricate, voluble and silent, I directly witnessed Erín’s research and development process, orientation and decision-making. Communicating vessels. Mirror neurons. Equivalences. Moves. Translation. Concentration and mental alacrity. The emergence and fine-tuning of This Radiant Life — right until it was printed and bound. “[T]o attend practise anticipate hone.” ** Colloquium of the voice of Erín Moure in my cells. A poietic laboratory for an erotics of the word. Poesía — live.

My gratitude to Erín, to Book*hug Press, to readers, is immense, and my enthusiasm inexhaustible. Hello, hello! 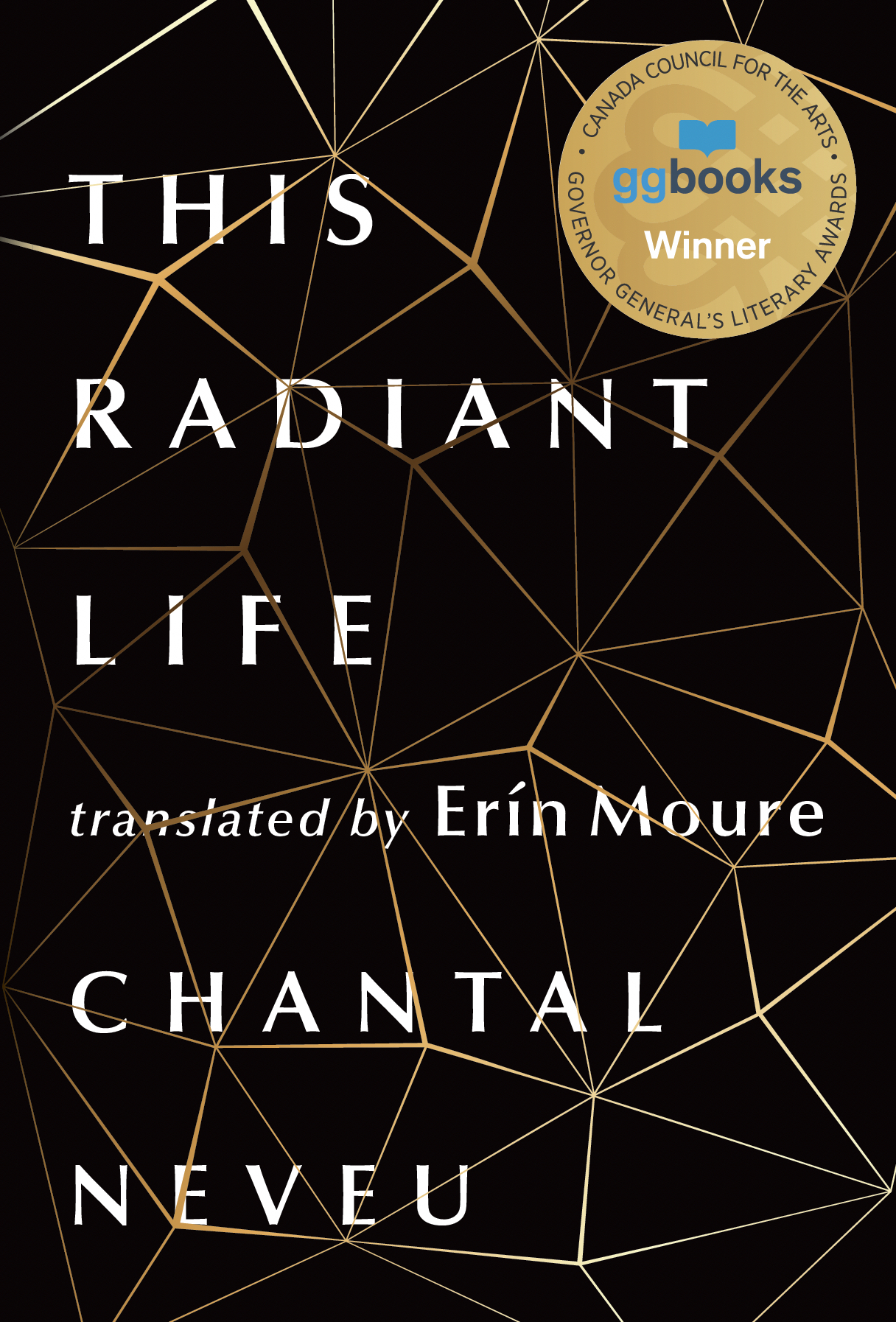