Song on Tongue: An Interview with Beatriz Hausner | Book*hug Press 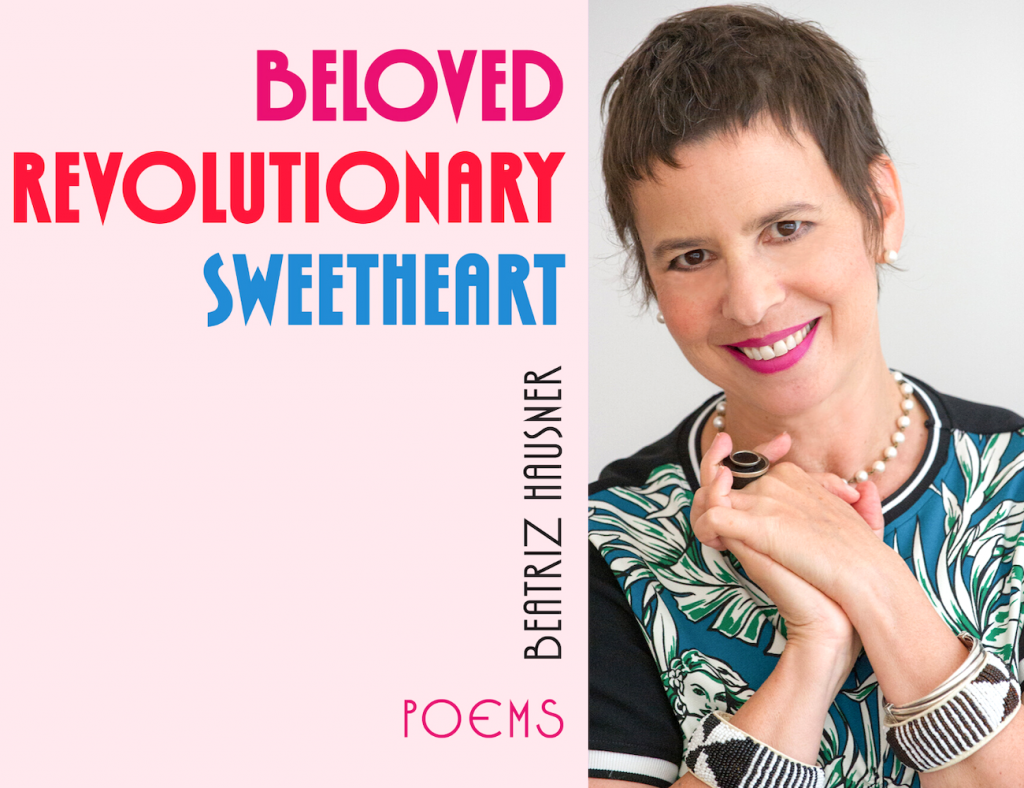 The first conversation that I have with Beatriz Hausner—author of Enter the Raccoon and the recently-published Beloved Revolutionary Sweetheart—lasts longer than I expect it to.

Exactly how long, I don’t remember. One hour? Two hours? It feels like minutes, because I’m captivated, both by her research and by her personal and political philosophies. During our second conversation, I’m captivated by her style: tortoiseshell glasses, red lipstick, and a pair of black and white earrings that scintillate under her chin. That she has an impeccable sense of fashion is unsurprising; it seems, to me, to be an extension of her liberation, one of a number of creative experiments. I’m convinced that, if her poems were people, they would dress like her.

Beatriz’s latest poetry collection is a modern epic. Unlike her earlier work, which favours short lines, Beloved Revolutionary Sweetheart sprawls like an unfurled tapestry: it spans the page as well as centuries. Beatriz traces this change—these “long lines in the manner of elegies”—to the Long Poem Writing Workshop with Jay MillAr.

“I had been writing poetry in a certain way for a long time,” she says. “My first two books were kind of in the same vein: fairly short lines, and thematically quite similar, but not entirely. I began to really get into reading older things, and suddenly that sort of writing that I had been doing—in that form, in that kind of breath—didn’t fit, didn’t suit what was starting to happen in my head with these new influences. Around the time of publication of my second book, I began to write and experimented with the work that is in Enter the Raccoon, somewhere between poetry and narrative prose… that was very liberating, but I wanted to find a way of writing poetry that suited… this new person that I was becoming, [who] could fit more density, more content, and at the same time, really explore something more sustained.”

Part-seamstress, part-alchemist, Beatriz twists and transforms seemingly disparate parts—the Byzantine empire, surrealism, twentieth-century pop music—into a single novel material. She describes Beloved Revolutionary Sweetheart as a “huge collage,” and she describes herself as a “magpie,” collecting the world’s shiny things. “There is nothing in reality that isn’t at your disposal for creation,” she says. “The spirit of change, the notion of transformation… those things really interest me.” She explains that “when you have all these elements that are building up in you, they just naturally juxtapose and explode or not or reject and reconnect, and that’s how this book sort of came into being. And I couldn’t have done it had I not tried to… write in a different way.”

I ask Beatriz about gender, perceiving its meltdown in some of the poems in the collection. “I never really think about it, to be honest with you,” she says after a thoughtful pause. “I suppose we all have both.” She apologizes for this answer, but it, too, is revolutionary, another reflection of her desire for liberation of spirit, mind, body, and art.

(Beatriz will be reading from Beloved Revolutionary Sweetheart at the book’s virtual launch on Thursday, April 30th, at 7 p.m. EST. Further event details are available on Facebook. Please RSVP by emailing Hazel at hazel@bookhugpress.ca if you are interested in attending. We look forward to seeing you there!)