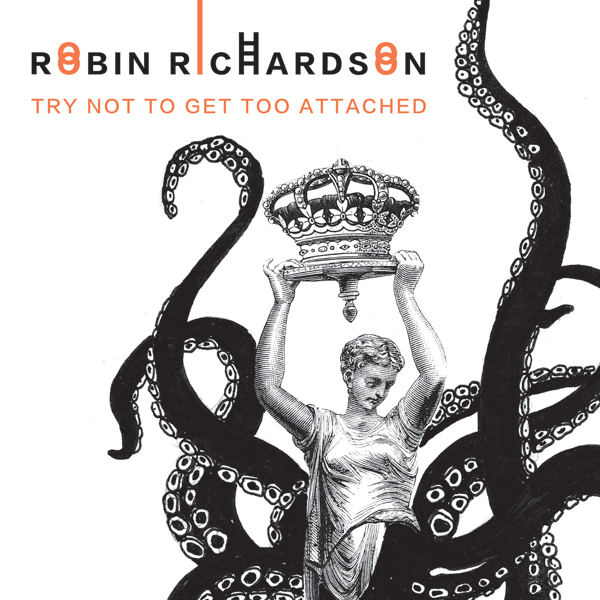 Our National Poetry Month Celebration continues with Robin Richardson, author of Try Not to Get Too Attached, the second title in our new Salon Series.

In Try Not to Get Too Attached, Richardson uses line drawings, colour and text, to transpose the sensibility of poetry into illustrated works, creating bite-sized, artistic meditations on the terribly wonderful, malleable and absurd experience of being alive. Richardson’s intuitive works—inspired by medieval illuminated manuscripts—are drawn from fleeting, conscious contact with various notions and emotions; they feel their way around meaning and what it is to be human.

In a review for The Brooklyn Rail, Megan N. Liberty writes, “Richardson’s typewriter-style lines of text (which are all rendered by hand), embedded in what can only be described as medieval-style emojis, are bittersweet, at once the wry humor of a teenage girl and the dark wisdom of a grown woman.” Poet and academic Alessandro Porco adds, “Try Not to Get Too Attached is an incredibly haunting self-portrait, the visual record of one artist’s journey into the psyche’s frayed and messy reaches, where ‘everything is so vivid,’ as she puts it. I keep originals of Robin Richardson’s art on my walls to remind me of that vividness every day, whether it comes in the form of beauty or terror or something else altogether.”

Richardson reads the first untitled poem from the book in the following audio clip:

Robin Richardson is the author of three collections of poetry, including Sit How You Want, winner of the 2019 Trillium Book Award for Poetry, and named one of the best books of the year by CBC Books. She is Editor-in-Chief at Minola Review. Her work has appeared in Salon, POETRY, The American Poetry Review, The Walrus, Hazlitt, Best Canadian Poetry, and Tin House, among others. She holds an MFA in Writing from Sarah Lawrence College, and a BD in Design from OCAD University. She has won the Fortnight Poetry Prize in the U.K., The John B. Santorini Award, The Joan T. Baldwin Award, and has been shortlisted for the CBC Poetry Prize, The Walrus Poetry Prize, and ARC Magazine’s Poem of the Year Contest, among others. She lives in Toronto.