“Pleasure is a job sometimes”: In Conversation with River Halen | Book*hug Press 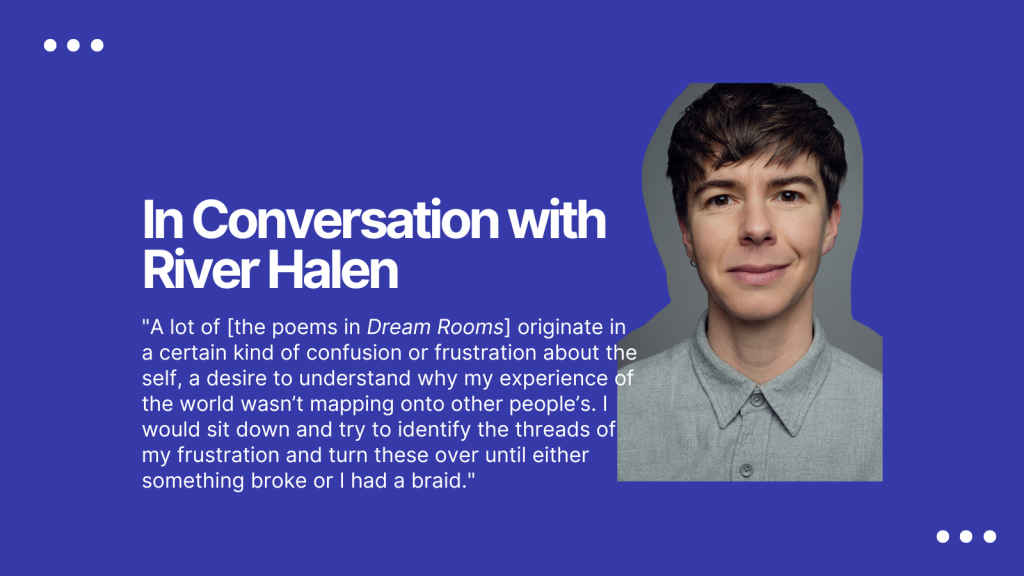 Today, we are delighted to be in conversation with River Halen, author of Dream Rooms.

Part essay, part poem, part fever dream journal entry, Dream Rooms is a book about personal revolution, about unravelling a worldview to make space for different selves and realities. Deeply queer and trans not only in its content but in its thinking, Dream Rooms invites readers to that place in consciousness where fear and desire, hidden information and common knowledge brush up against each other and are mutually transformed.

In the following conversation, River Halen talks about their writing process, the relationship between essay and poetry, the fundamental connection between the body and the environment, and more!

B*H: You are predominantly a poet, but Dream Rooms is a hybrid text, collecting essays and poems together. Can you speak a little bit about how it came to be and how the two forms combine to create an overall effect?

The honest answer is that Dream Rooms began less as a deliberate composition and more as an archeological excavation of my own work, originally intended for other projects (a book of poems, a book of essays, another book of poems, etc.) At a certain point I noticed a thread running through these other projects that interested me more than the rest of what I was working on, about gender identity and locating one’s political position in the world, and that’s what became Dream Rooms.

Since the book is about radical turns in thinking and departures from previous selves, I find it kind of satisfying that this is what’s happening in it formally too, that the book is lifted out of a series of abandoned texts.

The movement between prose and poetry in the book ends up being kind of like a river with variable momentum—okay, now we’re going over rapids and the lines are breaking quickly; now we’re fanning out to think a bit more languidly, like a floodplain. But the line of thinking is continuous, and I think there are more similarities between the essays and poems in Dream Rooms than there are differences.

B*H: Different literal and metaphorical rooms are occupied throughout the book. Each room provokes specific emotional states, philosophical concerns, and ways of occupying the world. Is a body a room?

Sure, I guess it could be! I am very much interested in how the body and the room it’s in aren’t separable, really—to change the state of one you have to reshuffle the other. Nobody changes without also changing their environment.

B*H: How do you find your way into writing a poem?

This is so hard to explain to someone outside my own head. Sometimes an experience or an image, or, especially, a coincidence of experiences and images just grabs me by the elbow and makes me sit down to figure it out. I think that I write poems at least in part to figure things out.

Speaking specifically about the poems in Dream Rooms, a lot of them originate in a certain kind of confusion or frustration about the self, a desire to understand why my experience of the world wasn’t mapping onto other people’s. I would sit down and try to identify the threads of my frustration and turn these over until either something broke or I had a braid.

Yes and no. I often think of my essays as, essentially, big, slow poems with a bit more space in them… and my poems have some essayistic qualities too. In both modes I’m very interested in the kind of braiding I just described—taking three or four main ideas or image-threads and letting these recur and wrap around one another as the piece progresses.

B*H: Dream Rooms covers the years leading up to your coming out as trans. As such, it doesn’t focus on transness explicitly, but hovers in realms of shifting meanings, spaces, and transforming possibilities. Do you believe there exists a trans logic or hermeneutics? Do you see it in your own writing?

I don’t feel in a position to know whether there is such a thing as “trans logic,” though it’s a funny thought!

I do know that to come out as trans in this culture—and this goes double if you grew up in a pre-internet generation or are at a multiply marginalized intersection of transness (racialized and trans, gender nonconforming and trans, disabled and trans, racialized and disabled and gender nonconforming and trans, etc., etc.)—requires completely upending what mainstream culture has told you about what your body means, what possibilities exist for you, and who you are allowed to be in the world. Probably, unless you grew up in a very particular kind of environment, a lot of these limiting scripts were delivered to you by the people closest to you—family members, friend groups, etc.—and by the books, movies, and other entertainments that you loved. So transition in this culture typically requires turning intimacy and love inside out for a period of time, en route to doing the same, hopefully, with so many other elements of society.

Dream Rooms, as you say, isn’t about transition per se, but it is about the kinds of maneuvers and escapes that enable someone to rework their position in and relationship to culture. So in that sense the book deploys—I wouldn’t say trans logic necessarily, but trans technology? The tools that help people turn things inside out.

B*H: In Dream Rooms, you reckon with literature and the bodies of work which influence or implicate your own. The essay, “Six Boxes,” explores your relationship with your library—one filled with “violent books,” the books of rapists and attempted murderers, books which you eventually discard. How do you approach reading these days? Have you ever thrown away your own work because it was influenced or inspired by a violent book?

There are so many books in the world and such a limited amount of time in life to read them. I don’t believe in purity, but I do believe in reading what I want to read, according to my genuine desires and interests, and in remembering that the cultural machinery trying to tell me what is most interesting at any given moment is, you know, deeply flawed.

When it comes to my own work, I mean, I’ve discarded so much of it, I discard work all the time! I like to think that I discard or keep something based on what it does. I’ve definitely let things go because I no longer believed in the political gesture they were making.

B*H: Dream Rooms is interested in family roots and inheritances, particularly in the context of your paternal grandmother. Why was this an important aspect to explore here?

Actually both my grandmothers have pretty prominent roles in the book, and I do remember being a bit surprised to notice this. Both grandmothers are the source of objects that I have complicated emotions about in the text, and ultimately can’t keep, or choose not to keep. (I’m referring to the woollen scarves and sweaters from my maternal grandmother that get eaten by moths as well as the tarnished candelabra from the Spanish Civil War, via my other grandmother, that I end up leaving at a thrift store.) In the book both of these losses function as a sign of approaching gender transition—I can choose the loss or resist the loss but the loss is coming for me either way, and maybe there is more to it than just loss.

Anyway, I guess the short answer is that family roots, for me, are the source of both my body and the culture(s) it was born into, so it makes sense that they would show up in a text where I’m grappling with both of those things.

B*H: In the poem, “Mirror,” you write, “pleasure is a job sometimes,” gesturing to the fact that it takes research, reflection, and work to reach pleasure—that, at the very least, you must know all your possibilities to discover which is most fulfilling. Do you see this as a sort of thesis for the collection?

I actually think “pleasure is a job sometimes” because we’re conscripted into exploitative environments, more or less by default. The job is identifying what’s hurting you and how, so you can leave it behind. I don’t know if it’s a thesis, but Dream Rooms is, I will admit, definitely interested in that.

In terms of knowing all your possibilities, I’m interested in that too—who wouldn’t be?—but also in acknowledging that it mostly isn’t possible to know them; so many have been cut off. To access something different requires a kind of sideways leap.

B*H: “All the Parts, Moving” theorizes connections between literature, the diary, and the manifesto. Is Dream Rooms a manifesto of sorts? If so, what does it hope to manifest?

I think Dream Rooms is trying to manifest a portal—an opening into a different kind of space.

River Halen is a non-binary transgender writer of Catalan and Danish descent born in Surrey, BC, on unceded Coast Salish land and now living in Tio’tia:ke (Montreal). Their poems and essays dealing with relation, ecology, transformation, and sexuality have been published widely in Canada, the U.S., Australia, and Japan. They have been shortlisted for the Trillium Book Award for Poetry and a National Magazine Award, and selected for inclusion in Best Canadian Essays.