“No straight lines in nature”: In Conversation with Alessandra Naccarato | Book*hug Press 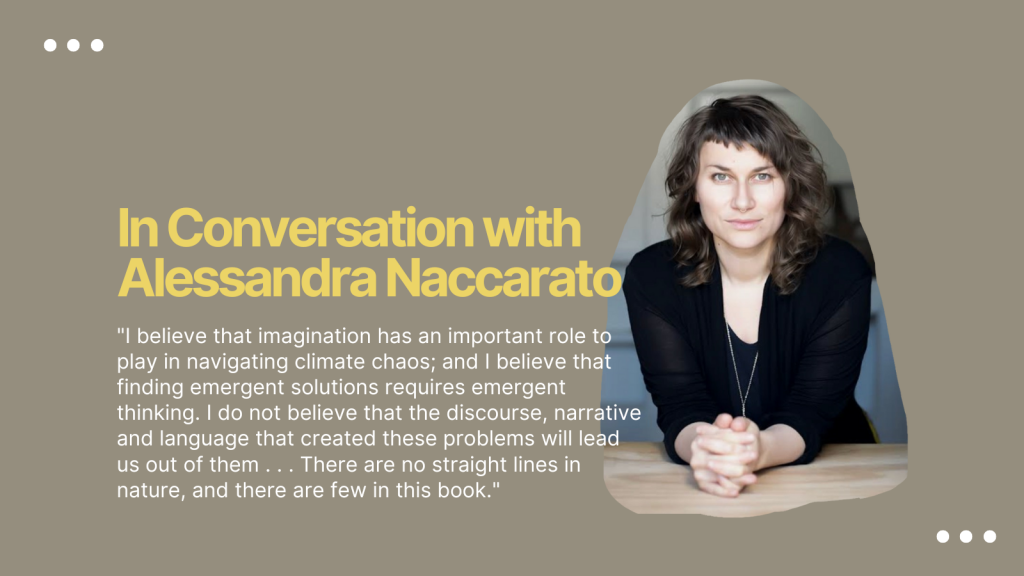 Today, we are thrilled to be in conversation with Alessandra Naccarato, author of Imminent Domains: Reckoning with the Anthropocene. Imminent Domains invites readers to join a contemplation of survival—our own, and that of the elements that surround us. Using research, lyric prose, and first-hand experiences, Alessandra Naccarato addresses fundamental questions about our modern relationship to nature amidst depictions of landscapes undergoing dramatic transformation.

In the following conversation, Naccarato takes us behind her reading and writing process, shares insights on the relationship between Imminent Domains and her poetry collection, Re-Origin of Species, and talks about the places that inspire her most.

B*H: Like Imminent Domains, your poetry collection Re-Origin of Species explores our relationship to the natural world. How was it approaching these same themes in an essay format as opposed to a poetic one? Do these books work in tandem?

AN: This book was a luxury and challenge; a chance to dive deeper and expand upon the research and ideas that were driving me as I wrote Re-Origin of Species. There was an enormous amount of research behind the poems in my debut collection that lay just beneath the surface, driving my understanding of our complex, fragile relationship to ecosystems that are in peril, and paradoxically, profoundly resilient and powerful beyond our measure. These books are in conversation, sometimes in overt ways, at other times more subtly. In particular, one section of Re-Origin of Species is titled “Imminent Domains,” and the poem “Mountain that eats Men” has become an essay of the same title. In the essay “Mountain that eats Men,” I was able to trace the legacy of extractive-colonialism, history of political coups, and present-day questions of lithium extraction in Bolivia—something that was not possible in the distilled version of the poem that focused instead on asymmetric understandings of sacrifice. This felt like an important and meaningful expansion of the work. This kind of approach often guided my writing process: the essay-form allowed me to research, contemplate, and discuss the social and political context behind symbols of intimacy with the natural world—symbols that often appeared in Re-Origin of Species—such as honeybees, ticks, silver and crystals.

B*H: Imminent Domains contains companion essays at the back, which relate to other essays in the book and can be read at any point. Why was it important for you to disrupt a linear reading experience?

AN: I wanted to write this book outside of a narrative structure of the Anthropocene, to dismantle rather than reinforce that framework of thinking. I believe that imagination has an important role to play in navigating climate chaos; and I believe that finding emergent solutions requires emergent thinking. I do not believe that the discourse, narrative and language that created these problems will lead us out of them. What we are facing is not going to follow a linear, narrative progression—and nature has always refuted that form to begin with. There are no straight lines in nature, and there are few in this book.

I was also contemplating dialogue with readers and their agency, as this structure came to fruition. How can we leave space for the reader to chart their own way? And what might the impact of that be? I have placed great care in the order of the essays in Imminent Domains—but I’ve also designed the book to hold integrity if the reader chooses the follow the elemental sections in a different order, or turn to the Understory in multiple ways, leaving hundreds of variations possible.

B*H: Did the book begin with a single essay? What was the seed, so to speak?

AN: I would say this book began with a specific experience, rather than a single essay—a tick bite which caused chronic Lyme disease, and transformed the landscape of my life and my health. Lyme disease and COVID-19—alongside other emergent infectious diseases—are driven by deforestation and climate change. For the last decade, I’ve been reckoning with the stark reality that climate change is not just around us; it is within us. And this book arises from the struggle to find meaningfulness, maybe even hope, in the midst of illness, uncertainty and loss.

B*H: As you researched, did you discover anything that surprised you, or changed the shape of what you thought you were writing?

AN: The process of writing this book was full of surprises. These essays are a navigation of uncertainty, which reflects our reality of environmental peril, I think. The answers that the world has to offer us are only temporary, and that’s what I found in my research, again and again. When I began contemplating species extinction, for example, I focused on my favourite animal as a child: the black-footed ferret, which was once declared extinct, then found again, and so is deemed as “Lazarus species.” But even as I wrote the essay “Lazarus Species,” the black-footed ferret became the first-ever endangered species to be successfully cloned in the United States in 2021, and my work veered completely. The ferret was cloned, I discovered, by a non-profit that is invested in the de-extinction of species like the passenger pigeon and woolly mammoth. The essay I began in 2020 had to transform in 2021. The same thing could be said for this book as a whole: I began writing a book that contemplated zoonotic illness in fall 2019, before the pandemic began. So, I feel like this book is aptly named. I imagine the Understory could be added to every few months, to reflect the rapidly-changing nature of fields like biotech and resource extraction. The fundamental questions of this book, however—about relationship, grief and survival—those persist, even as the research and science progresses with constant surprises.

B*H: Is there a natural landscape that inspires you as a writer?

AN: Lately, I’ve been inspired by wild spaces that are contained within urban centres. I returned to Tkaronto/Toronto as I wrote this book, after many years on so-called Salt Spring Island, living immersed in nature. But the city is where I grew up, and urban landscapes are the only ones I had access to as a child. The ravine near my home is increasingly filled with coyotes, foxes and black birds. There’s often wild rabbits in my front yard. And as I completed this book, I returned to the Toronto islands for an artist residency at Artscape Gibraltar Point. The islands show up in multiple essays in the collection, and it was pivotal to return there as I completed the water section of the book. But my relationship to these landscapes will always be complex and shaped by my role as a settler and uninvited visitor here; I feel humbled and privileged to be here, and I also hope to reflect that gratitude and a sense of responsibility in my work.

B*H: What do you hope readers will take away from your book?

AN: I hope readers will leave this book with some new information, perhaps some insight—but most of all, I hope they are inspired to contemplate their own story, their personal relationship to memory, meaning, and climate emergency. I hope readers find themselves asking: what can I uniquely offer? How might we turn toward this fire together?

Alessandra Naccarato is the author of Imminent Domains: Reckoning with the Anthropocene (Essays) and Re-Origin of Species (Poems). Born and raised in Tkaronto (Toronto), she is the recipient of the RBC Bronwen Wallace Award and the CBC Poetry Prize, and her poetry and essays have appeared widely in publications such as The New Quarterly, Room Magazine, and Event. She holds an MFA in Creative Writing from the University of British Columbia, and a graduate degree in Community Economic Development from Concordia University, supporting two decades of work and research in grassroots social change, community arts, and the prevention of gender-based violence. Her debut poetry collection, Re-Origin of Species, was awarded the AICW Bressani Literary Prize for Poetry, shortlisted for the Gerald Lampert Memorial Award, longlisted for the Pat Lowther Memorial Award, and named a Best Book of 2019 by CBC Books.
Alessandra Naccarato, Imminent Domains, In Conversation
Share this post
Facebook Twitter Pinterest