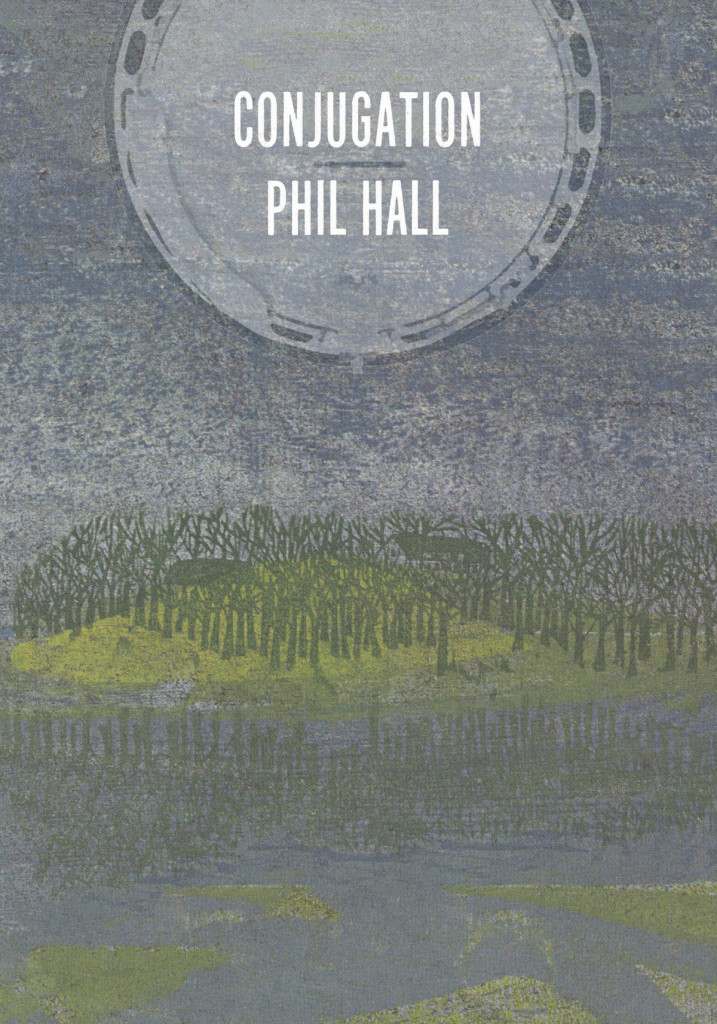 From award-winning poet, and our own senior poetry editor, Phil Hall, comes his latest collection of poetry, Conjugation. The term “conjugation” refers to more than the obvious grammatical movement of pronouns through time (I am / you are / they will be). For, in Biology, it also refers to the transfer of information between cells. Conjugation sees an open realm where individual letters inside a word are each rolling through their possibilities, from A to Z.

As much care was taken with the writing of this collection as the shaping of the poems themselves. Replete with images of the natural world and in some cases, the mechanisms that transform it-horses, leaping fish, trees, canals and locks-Conjugation signals a return to the nature/nurture elements that have wound their way through his earlier collections, but also a versed ode to the discouragement that many Canadians have felt about the progression of their country and government over the past number of years.

BookThug alum Wanda Praamsma, author of a thin line between, sat down with Phil Hall to discuss Conjugation, his fourth collection of poetry to be published by BookThug.

Wanda Praamsma: You once said to me that, often, a poet’s first two books are their most exciting/interesting works, because there are fewer inhibitions. How does this apply to your works? Or does it?

The initial reviewers, if there are any, will agree—terrible imitative pretentious poems, but with some indefinable other quality, some un-behaving promise…

A.R. Ammons’s first little self-published book, Ommatium: With Doxology (1955), comes to mind, (what a title!), for it announced with authority an important career, and only in hindsight did anyone hear it for what it presaged:

This is the best situation: no one is listening. The freedom of no one listening!

Or think of Erin Mouré’s Empire, York Street (1979). Anger, frustration, speed of transition, lyric grace sat on and made to say gimme! That book is Place known as Self; Self known as Place. Erin had been working on the trains; and she had been learning French, her second of many languages, toward a collaborative feminist challenge.

In this company, to add my own squeak is not easy. In 1979, an awful poet with a degree in poetry, I woke up on a train west, and started apprenticing myself to the vowels. Mine was a minor madness that didn’t know where it was going, but a kind of joy as well. I didn’t know it, but I was going away from Wordsworth, toward Wah.

Later, with many books (read and written) behind us, below us—there can be a self-tradition that controls the next lines by awareness of the lines that came before. The job, then, is to find ways to keep waking up on the train, to keep finding the gumption to make up a new scared song, like those first ones in their blind gumption, unlike those first ones as in wider, and as in not repeating one’s self…

When a new book is coming out, I think I have done this waking trick, each time. After it comes out, I think I have made a toy train that reminds me of the real thing, or I think that it is all cheap and incomprehensible again, a kind of punishment.

Readers are better than the gods. They forgive. They pick the raw out, if it’s there.

Readers, at each launch, hope that they are buying the energy of those first books once again.

WP: I wonder about ego & metaphor. And doubt. Is there more doubt now, for you? Is that a good thing?

PH: Ego is a back-up generator that clicks on by its own prompts. Suddenly, there is light. I, I, I, I. The neon tubes of me-ness. But do we need so much light now that we have gotten used to the darkness? (Metaphor has snuck in, is here, again, too.)

I doubt I know how to turn my ego off, but when I can, I sense the poem in the darkness. The poem I invite is not metaphor. It eats metaphor for breakfast!

Doubt is bad if it forces upon us the silence of closure.

Maybe doubt is metaphor’s back-up generator? In this sense, doubt is a good thing, for it over-rides incessant simile with a pervading skepticism about the connections between things—and this kind of doubt can invite… Good doubt says that each time we relate one thing to another cleverly we are blinding the poem to its real energy, which is the silence of invitation.

The silence of invitation, which is always patient and sure…

WP: I wrote this down while reading: debunking Canada / embarrassed / what is it made of? / not Al Purdy. Is that accurate?

PH: Yes. Our traditions are imitative, colonial, provincial, sophomoric, precious, quaint, and as dull as class exercises. The curse of the A+…I am embarrassed to be writing out of these traditions.

Again, it comes down to: I hate myself. Not Canada, but that I am this little, and of this little. The embarrassment of the Ontario rural poor is also in it. (See the poem “Poor” in Conjugation.)

I am saying I consistently see the hope of our literature in women, and in foreign (often gay) men. Garcia Lorca!

Between waft and spin
In slight effort and rate of exchange…

Between story, market, dictionary, and zoo
In accumulation…

In edge, in bounds, in excessiveness, in medium
Fanned and disavowed…

To deny and desire
Our object

WP: Otty Lake. You allude in a previous blog post to taking its name as your own, as Basho did. You once wrote about living sloppily in the city. How are you & your writing different now?

PH: The routines of our life at Otty Lake have allowed me to find a daily practice of early morning writing. I have never had this before. I was always a hide-the-notebook and stay-up-too-late kind of poet. I have a stand-up desk now, and Conjugation comes directly out of this early morning daily practice. I coin, in this new book, a dawn focus poem as a madrugar (that Spanish word for the suspended magical atmosphere of being up too early). I try to honour those earlier, crazier times, by a braided inclusiveness now.

Do words, upturned, heal you?

PH: Yes. I am in solidarity with the little words, my carpenter ants. (Here comes metaphor again.) My of or is or at by so…In this way, by these, I protect myself from concepts. By these, I can get close to, and between, some few things I trust. (Mostly lang. Language.) And I can keep far away from some things that scare me still. (Mostly imposed form, and Bobcaygeon.)

The little words eat away at heritage (homes) until it (they) are but dust. Together we will bring it all down, that imperialism of courtesy. With those little words, their open sounds as hard as nails (how can that be?), I am also building a new place, a gazebo! Healed? Who, ever, can be?

WP: The rhythm. Staccato. Vibrato. What do you hear? Is there a metronome ticking?

PH: I hear a cross-hatch, a braided rug sounding, a preoccupation quilt, an interruptions montage, a crazy patchwork that disguises its thesis as contrariness or limpidity, a ripple of light that is italics coursing a stone mid-stream and saying so, so, so what…

WP: Certainly this is not your “last book.” How does Conjugation fit into your writing trajectory? Do you have a trajectory?

Of course, there is one. An arc. The last notebook entry, ending at half a word…half of a word that is indecipherable… half of a new word, still-born…

But the poem does not know any of this. The poem thinks it is my first poem.

To the poem, the word arc is only one syllable: a vowel, a growl, and a scooping plosive.

Order your copy of Conjugation here.

Phil Hall is a writer, editor, and teacher. His first book, Eighteen Poems, was published in 1973. Among his many published titles are: Old Enemy Juice (1988); The Unsaid (1992);Hearthedral-A Folk-Hermetic (1996); An Oak Hunch (2005); White Porcupine (BookThug, 2007); Killdeer (BookThug, 2011; winner of the 2011 Governor General’s Literary Award for Poetry, the 2012 Trillium Book Award, and shortlisted for the 2012 Griffin Poetry Prize); TheSmall Nouns Crying Faith (BookThug, 2013); Guthrie Clothing: The Poetry of Phil Hall, a Selected Collage (2015); and My Banjo and Tiny Drawings (2015). Hall has taught writing at York University, Ryerson University, Seneca College, George Brown College, and elsewhere, and has held the position of Poetry Editor for BookThug since 2013. Conjugation is his latest book. Phil lives with his wife near Perth, Ontario.

Wanda Praamsma grew up in the Ottawa Valley in Clayton, Ontario. Her poetry has appeared in Ottawater, eleven eleven, Lemon Hound and Feathertale. Her first book of poetry, a thin line between, was published by BookThug in 2014. Praamsma currently lives in Kingston, Ontario. Connect with her on Twitter@wpraamsma.