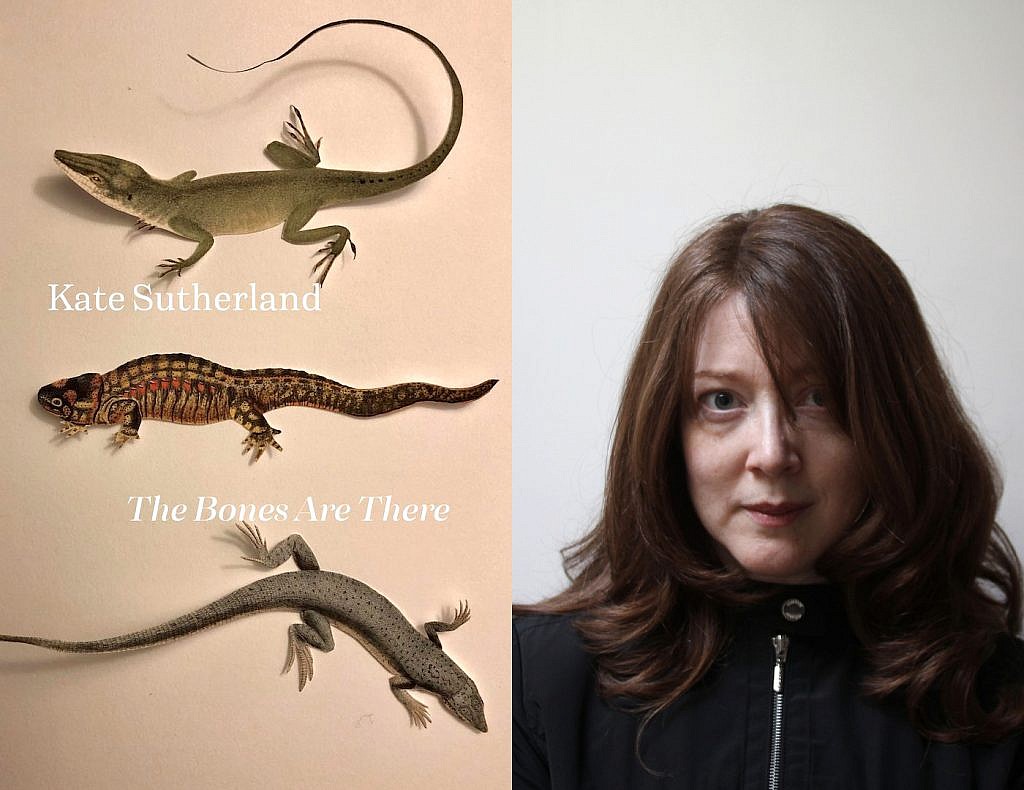 “… you might now find me making poems with paint, a needle and thread, or scissors and paper and glue.” —Kate Sutherland

Our conversation continues with Kate Sutherland, whose fourth poetry collection, The Bones Are There, celebrates its official publication today; congratulations! Sutherland’s poems thrive in the liminal space between the written and the visual, but also between the past and the present, which aren’t—as The Bones Are There demonstrates—mutually exclusive. Sutherland herself is just as versatile: she’s a brilliant collagist and professor, as well as a critical voice in a centuries-old, many-headed conversation about the planet on which we live. We’re delighted to share her thoughts with you today.

I’m writing a sequence of poems about climate change using as my vocabulary only words that appear in the 1818 edition of Mary Shelly’s Frankenstein; or, The Modern Prometheus. Climate change is a predictable preoccupation for me given its role in the extinctions I explore and lament in The Bones Are There. And Frankenstein is proving a generative frame for thinking about it because of obvious connections with the theme of the novel and the conditions under which it was written (in the Year Without a Summer that followed upon the 1815 eruption of Mount Tambora), but also because of the ways that the climate crisis of our time can be linked to emerging scientific and economic discourses of that time.

What book coming out this season can you not wait to read?

There are many! To start with: Render by Sachiko Murakami, An Alphabet for Joanna by Damian Rogers, and Word Problems by Ian Williams.

I used to be a café writer but I can no longer cope with the distraction of that kind of hubbub. So now it’s mostly at my desk at home. I also find residential writing retreats extraordinarily productive, especially at the stage when I’m trying to transform something big and unwieldy into something book-shaped.

I generally begin with a pen and a notebook then shift to a computer when whatever I’m working on seems to be turning into something bigger. But lately my work is becoming more visual, and you might now find me making poems with paint, a needle and thread, or scissors and paper and glue.

My most recently written book is comprised of three long poems or poem sequences. With two of the three parts, it was a matter of just following them wherever they took me. But once they were done and I realized they belonged together, I approached the third part more consciously as a piece of a book. Once I felt like I’d turned that part into something that stitched the rest together, I was satisfied that the book was done.

Tea by the bucketful.

Do you have a preference for fiction, nonfiction, or poetry in your reading or writing?

I used to read and write mostly fiction. Now, outside of my academic work, I write poetry exclusively and read mostly poetry and nonfiction (memoir, essays, and natural history). But currently the books I find most interesting to read are the ones that break down genre distinctions and, for example, operate simultaneously as poetry, memoir, and essay. I aspire to do more of that in my own writing.

It’s a damp, woolly grey sky, which is something of a relief after a too-hot Toronto summer. But it makes me miss big prairie skies even more keenly, not having been able to visit my family in Saskatchewan since the pandemic commenced.

Kate Sutherland was born in Scotland, immigrated to Canada as a child, and grew up in Saskatoon. She studied first at the University of Saskatchewan, then at Harvard Law School. She is the author of two collections of short stories, Summer Reading (winner, Saskatchewan Book Award for Best First Book) and All in Together Girls, and the poetry collection, How to Draw a Rhinoceros (shortlisted for a Creative Writing Book Award by the Association for the Study of Literature and the Environment). Her stories and poems have appeared in various magazines and anthologies including Best Canadian Poetry and Best American Experimental Writing. She has done residencies at Hawthornden Castle in Scotland and at the Leighton Artist Studios in Banff. She lives in Toronto where she is a professor and conducts research in the fields of Tort Law, Feminist Legal Theory, and Law and Literature at Osgoode Hall Law School, York University.