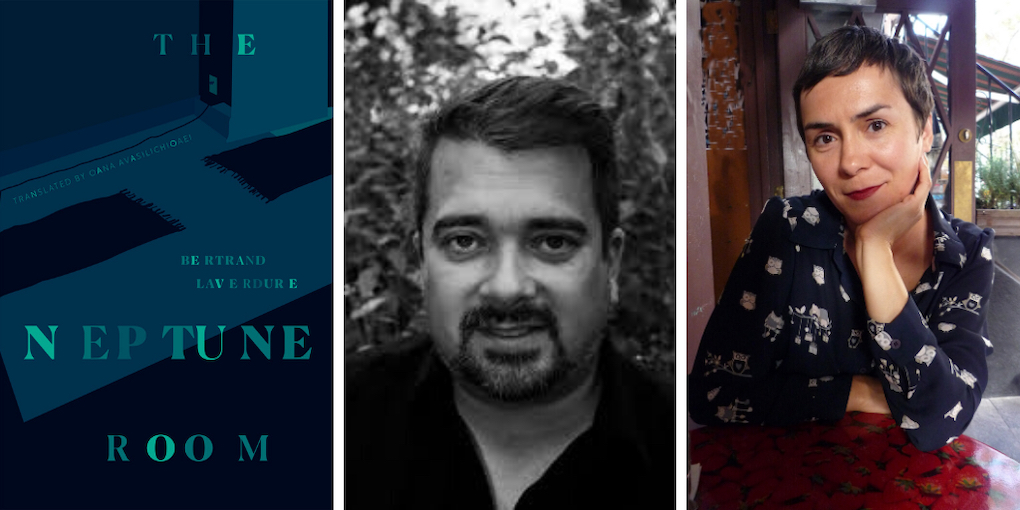 “I literally fall in love with certain words.” —Bertrand Laverdure

Bertrand Laverdure is the kind of author who speaks—or, in the case of this interview, emails—as vividly as he writes. (Skeptics should watch his 2015 interview with translator Oana Avasilichioaei.) He makes diet pop and t-shirts seem as profound as death, the latter of which appears prominently in his latest novel, The Neptune Room,  translated by Avasilichioaei. Laverdure and Avasilichaioaei are the dynamic author/translator duo behind Universal Bureau of Copyrights, and Readopolis, the latter which won the Governor General’s Literary Award for Translation. In this new interview, Laverdure shares what he’s currently reading and writing, what he misses the most during the pandemic, reveals that he’s a polyamorous lexicalist, and more.

I work simultaneously on three projects that matter to me: a book on my mother, an illustrated album on a character drawn from nature, with an exceptional illustrator, Catherine Filteau, as well as the writing of an opera. The biggest challenge I have to face is taking the time to give my maximum for each of these projects. These are three works that really stimulate me for different reasons. I hope these will live up to my expectations. I will take the time to write them, in order to offer them to you in their best attire.

I am currently reading for an article to write, Y: Oppenheimer, Horseman of Los Alamos by Aaron Tucker, a contemporary novel on the life of the creator of the atomic bomb.

What do you miss?

Kiss someone with passion. I miss it a lot. I hope that in the months and years to come, I will have the opportunity to reconnect with this ecstatic state of carnal and loving communion.

What book—or books—would you recommend to a friend right now and why?

I recently finished Into the Forest by Jean Hegland and Roppongi: Requiem for a Father by Josef Winkler, two books that I highly recommend. One for the survivalist side post-gasoline but with two women as protagonists and the other, for the memory drift around the figure of the severe dead father and passages both morbid and philosophical on the pyres of the dead in Varanasi, in India.

I am obsessed with t-shirts. Since my two months of confinement, I have had three come by mail, including a yellow with the face of Allen Ginsberg and another with the funeral sign of the Spellmans (I am a fan of the Sabrina; my sinful series on Netflix, I’m waiting for season four).

I literally fall in love with certain words. Don’t ask me why, but for example, I used the medical word “nosocomial” in a poem a few years ago and I was recently telling someone about how much that word appealed to me at that period of time. I collect love stories with words. I would say like Jacob Wren, I am a polyamorous lexicalist.

Bertrand Laverdure is a poet, novelist, and literary performer. He has published six novels, including Universal Bureau of Copyrights (2014) and Readopolis (2017, winner, Governor General’s Literary Award for Translation), both translated by Oana Avasilichioaei. His many poetry publications include Cascadeuse (2013) and Sept et demi (2007). He was awarded the Joseph S. Stauffer Prize from the Canada Council for the Arts (1999) and the Rina Lasnier Prize for Poetry (2003) for Les forêts (2000). He was a literary chronicler on MAtv and CIBL-FM, and Poet Laureate of Montreal from 2015 to 2017.