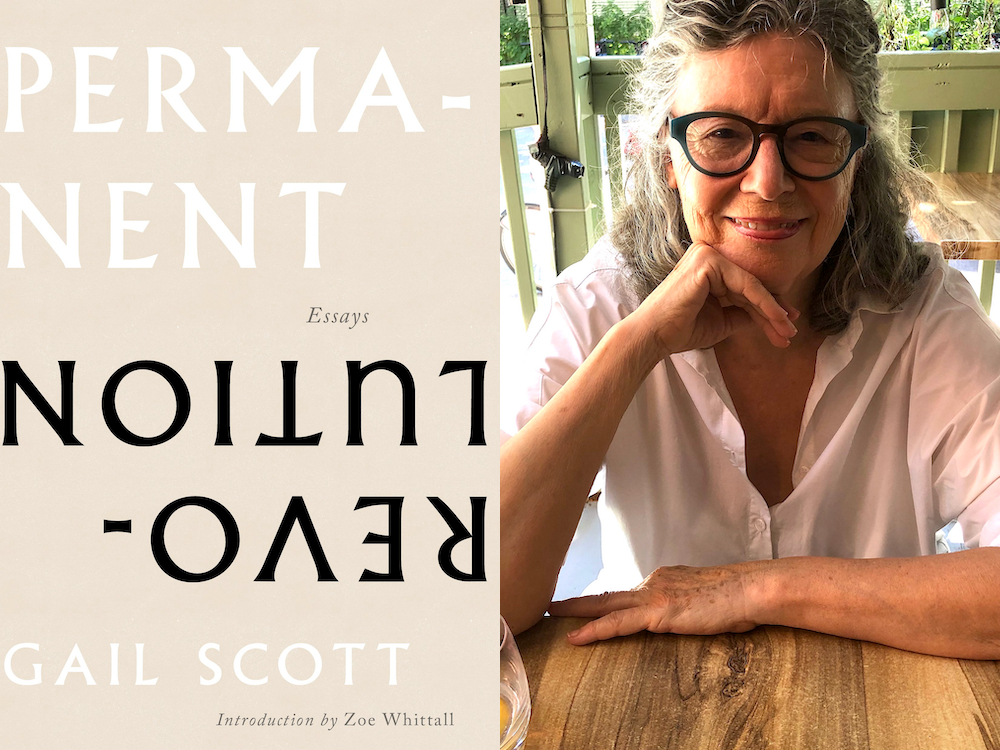 Happy Publication Day to Permanent Revolution, by Gail Scott! We’re thrilled to share this stunning essay collection with you, at last, which was edited for the press by Margaret Christakos and beautifully designed by Michel Vrana.

Scott’s Permanent Revolution is a collection of new essays gathered alongside a recreation of her groundbreaking text, Spaces Like Stairs. These essays—bookended with a foreword by Zoe Whittall and an afterword by Christakos—provide an evolutionary snapshot of Scott’s ongoing prose experiment, which hinges the matter of writing to ongoing social upheaval. As Scott writes, “Where there is no emergency, there is likely no real experiment.”

Anne Boyer calls Permanent Revolution “[a]t once erudite and intimate,” “a vital set of meditations on difficulty and feminist art,” and “courageous, expansive, and necessary to all.” Rachel Zolf writes, “To experience Gail Scott’s écriture is to open yourself to ‘a wild, titillating, ineffable excess.’ Her ‘community of sentences’ are bodily gestures that we are folded together with, com-pli-cit. She gathers the noisy polyglossic surround of her city, ‘wilfully fuck[ing]’ the caesuras between torn and porous sentences and subjects. What seems at first the limits of articulation with proper listening becomes a beautiful threshold of social space. This book of essais, radical tries, charts Scott’s writerly formation at the nexus of Québécoise feminist fiction/theory and San Francisco queer New Narrative bodily spillage. No one writes quite like Gail Scott, and we all have so much to learn from her untameable work ‘at a juncture of politics + excess.’”

We’re delighted to share Scott’s thoughts about reading, writing, and her new book. Permanent Revolution is available to order from our online shop or from your local independent bookstore.

“I have recently finished a book called Furniture Music, about a group of poets in NYC during the early Obama years. And I am beginning a new work of fiction, set in Montréal.

“There is a splendid plethora of new books right now. So much good writing, c’est l’embarras du choix. Of late my reading has been to a considerable extent of Black and Indigenous writers. The best writing is often that which responds to a state of crisis and this is ongoing for people of diverse minorities. Including queers. And many women. That’s why I called this new collection of essays Permanent (upside down) Revolution.

“As far as books I am looking forward to reading: Liz Howard’s new Letters in a Bruised Cosmos. And I want to reread Louise Bernice Halfe’s Blue Marrow in celebration of her nomination as Parliamentary Poet Laureate.

“I have thought of myself as a writer since I was a very small child. I don’t know why. There were no writers in the family. Although my mother’s family did have a talent for tall tales. We read for a period, en famille, the St. James version of the Bible out loud and argued about it. This taught me something, I think, about the beauty and complexity of language.

“I read a lot of poetry, my non-fiction reading has a philosophical leaning, and I like genre fiction. Especially the detective genre. But, regardless of genre, as I already mentioned, I am always on the lookout for writing that has a sense of urgency to it. I re-read a lot. Poetry sustains that as does good theory + fiction. Last year I read Joshua Whitehead’s Jonny Appleseed 3 times. Fred Wah’s Music at the Heart of Thinking is bottomless in a good way.

“I was thinking about my mother this morning, who died at the age of 52. One day when I was five or six my mother said: ‘Wash your face.’ I went into her bedroom and plastered her precious Ponds Cold Cream on my face, as she did to remove makeup. I said to the little white face in the mirror: ‘One day you will be famous.’ Boy, did I ever get into trouble.

“It is snowing after a heat wave. I wonder what is happening to the new shoots pushing up in the garden.” 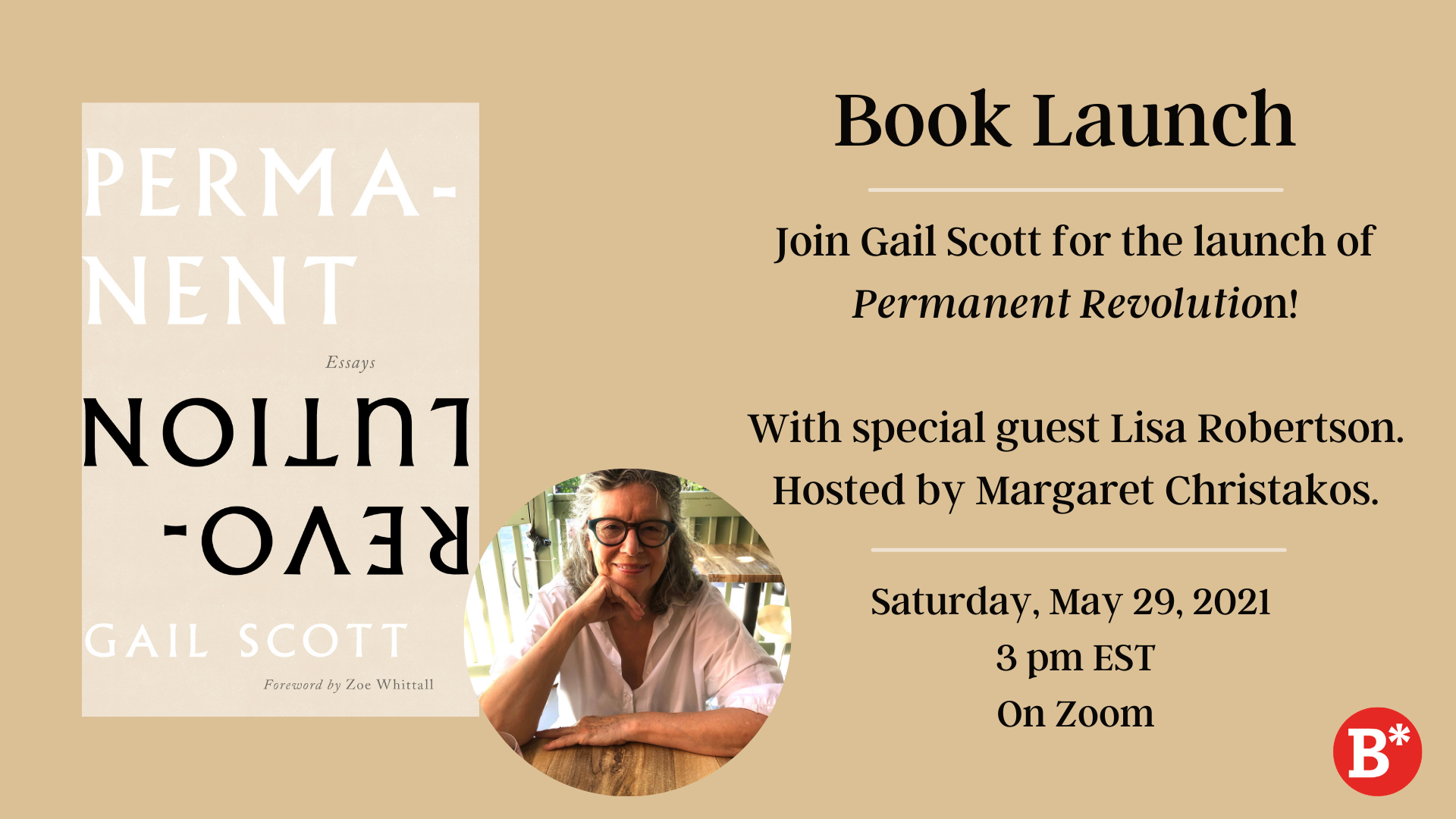 Please join us on Saturday, May 29th, at 3 p.m. EST for the virtual launch of Permanent Revolution. The event—hosted by Margaret Christakos—is free to attend, and will feature readings by Gail Scott and an interview moderated by special guest Lisa Robertson. Pre-register for the Zoom webinar here. We look forward to seeing you there!

Gail Scott is the author of Spare Parts (1981), Heroine (1987, re-issued in 2019 with an introduction by Eileen Myles), Main Brides (1993), My Paris (1999), Spare Parts Plus Two (2002), and The Obituary (2010). Her essays are collected in Spaces Like Stairs (1989) and in La Théorie, un dimanche (1988) which was translated into English as Theory, A Sunday (2013). Scott is co-editor of the New Narrative anthology: Biting the Error: Writers Explore Narrative (2004). Her translation of Michael Delisle’s Le désarroi du matelot was shortlisted for a 2001 Governor General’s Literary Award. A memoir, based in Lower Manhattan during the early Obama years, is forthcoming. Scott lives in Montréal.