Asian Stories, Asian Storytellers: You Are Eating an Orange. You Are Naked. by Sheung-King | Book*hug Press 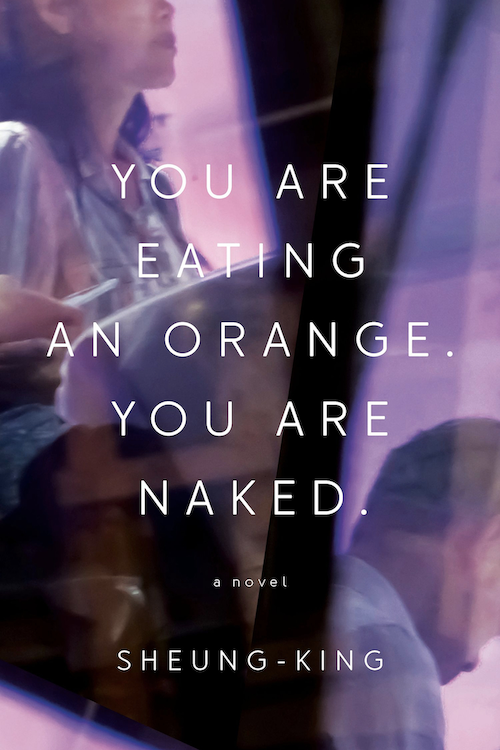 This May, please join us in celebrating Asian Heritage Month: a recognition of the humanity, power, and ongoing struggles of Asian communities throughout the world. Book*hug is honoured to have published ground-breaking, critically-acclaimed fiction, non-fiction, and poetry by Asian authors, and for the next several weeks, we’ll be shining a light on these authors and their brilliant work. We know that our work, as allies, doesn’t end with blog posts, nor does it end at the end of May; the fight for Asian empowerment is perennial. We encourage you to support—and defer to—Asian voices, organizations, and initiatives, such as the ACLA (Asian Canadian Labour Alliance) and Butterfly (Asian and Migrant Sex Workers Support Network).

Our series continues with You Are Eating an Orange. You Are Naked., by Sheung-King. You Are Eating an Orange. is an intimate novel of memory and longing that challenges Western tropes and Orientalism. In it, a young translator living in Toronto frequently travels abroad—to Hong Kong, Macau, Prague, Tokyo—often with his unnamed lover. The couple begin telling folk tales to each other in restaurants and hotel rooms, perhaps as a way to fill the undefined space between them. Embracing the playful surrealism of Haruki Murakami and the atmospheric narratives of filmmaker Wong Kar-wai, Sheung-King’s debut is at once lyrical and punctuated, and wholly unique, and marks the arrival of a bold new voice in Canadian literature.

“A tale of two rich and rootless people that oozes the horror and confusion of love, while staying somehow still desperately romantic, and so gloriously sad,” writes Thea Lim. “This novel is also about something else: it gives the cold shoulder to the dominant gaze and its demands to control the Asian body, carving out a thrilling space beyond whiteness.”

You Are Eating an Orange. has received widespread, well-deserved critical acclaim. It was named a “best book” debut of 2020 by The Globe and Mail, and was longlisted for CBC Books’ 2021 edition of Canada Reads. The book is also a finalist for the 2021 Amazon First Novel Award.

Sheung-King is a writer and educator. His work has appeared in PRISM International, The Shanghai Literary Review, and The Humber Literary Review, among others. He is currently a lecturer at the University of Guelph and Sheridan College. You Are Eating an Orange. You Are Naked. is Sheung-King’s debut book. Originally from Hong Kong, he lives in Toronto.