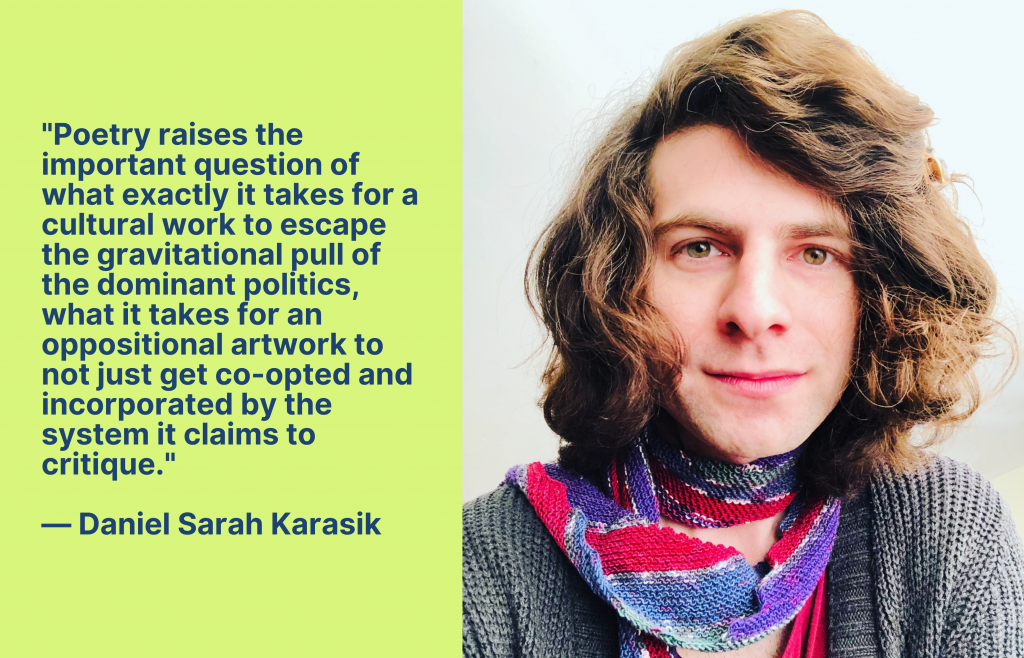 This Spring, we return with our In Conversation series, where we speak in detail with recently published Book*hug authors about their books and the ideas—notions, whims, feelings, inspirations, memories, actions—behind them. First up is Daniel Sarah Karasik on their new poetry collection, Plenitude.

Today, Daniel Sarah Karasik speaks with us—their words imbued with the same cleverness and deep thought that rings clear throughout the collection—about the inseparableness of politics and poetry, the potential in metaphor, the poetic use of autobiography, and so much more!

B*H: What came first for you, politics or poetry?

DSK: Objectively they were simultaneous. Subjectively? Poetry came first. Because I grew up as a male-assigned white kid in the petty-bourgeois suburbs of a settler state in the imperial core, I was allowed to think of politics as something external to my life, a special interest I could cultivate or not, and to believe that poetry and politics could be fully separable categories. Lmao.

B*H: Does poetry play a role in political life?

DSK: Yeah! I think that a lot of the time, poetry plays the same role that most other cultural production plays in political life: indirectly, and typically without this conscious intention on the part of poets, it serves to bolster the dominant political ideology, which in the majority of the Global North is liberalism. But poetry’s interesting in that it’s one of the art forms that pretty often expresses an intention to contest that political ideology (unlike, say, most TV, which tends to unabashedly celebrate it: so many cop shows, etc.).

So poetry raises the important question of what exactly it takes for a cultural work to escape the gravitational pull of the dominant politics, what it takes for an oppositional artwork to not just get co-opted and incorporated by the system it claims to critique. Which is a really tricky question to answer! But I do think that kind of ideological escape is possible; I don’t think the dominant culture’s hegemony is absolutely seamless. And my hunch is that when it is possible, that has to do with the individual artwork’s integration into a constellation of social forces—social movement organizations, unions, political parties, study groups, networks of comrades who populate all of the above, etc.—that collectively forge an alternative to the dominant institutions and the ideology those generate. An individual artist or individual artwork on its own can’t achieve that kind of ideological escape velocity, I don’t think.

B*H: The voice in Plenitude is playful. It has an essential buoyancy to it despite being rather scathing in its critique of capitalist exploitation and oppression. How did you land on this manner of speaking?

DSK: Ha, yeah…I don’t mean this flippantly, but I think I just really like verbal playfulness and really hate capitalist exploitation and oppression 🙂 So I guess my personal tastes came through there, without being consciously mobilized for poetic effect or whatnot.

B*H: Plenitude distrusts metaphor. It is suspicious of “claiming two things / are the same when clearly they’re not.” And many of the poems in the collection avoid metaphor altogether. At the same time, Plenitude embraces interpretation and multiple meanings, “limitless forms of descriptive difference.” Can you tell us about your choice to resist metaphor?

DSK: This observation that the poems tend to avoid metaphor is really interesting! To some extent, I feel like that one poem’s [“a simile is more honest than a metaphor / thank you no questions at this time”] declared mistrust of metaphor is…a metaphor…(ok maybe more of a metonym)…for dislike of imprecise or tired or sentimental communication, an autistic (but not only autistic) desire that socially coded language should be made accessible to those who don’t know the code but need the meaning. But I don’t think that position actually precludes metaphor, of certain kinds—that is, mistrust need not entail total avoidance! And I think that position can open up rather than shut down possibilities for interpretation, insofar as it asks for every possible meaning to bloom, as long as we can look at every meaning and ask questions. As long as every meaning can be made available for the inquisitive to parse. A shorter answer would’ve been: so like, I’m autistic, but also I’m Jewish.

B*H: Some of the most personal—and the most poignant—poems in the collection are about your experiences of transness, gender dysphoria, and desire. Do you feel that poetry and autobiography are fundamentally linked?

DSK: I’m glad those poems seem poignant! They’re among the poems I’m often most nervous to share, since I feel like my experience of transness is so contradictory and ill-suited to the task of political representation: the cultural expectation that a poem by a trans person (for example) will tell you What It’s Like To Be A Trans Person (for example).

Maybe this is kind of a metaphysical joke, but I find myself wanting to say that although I happen to be a trans or nonbinary or genderqueer person, I really have no idea what it’s like to be one. By which I mean: I’m grateful for how those categories and that language help me relate to others and understand myself, and also I find my experience of gender (like many people’s!) is dynamic and contingent and fluid in a way that’s in some tension with political strategies of representation in a liberal society, which need to lock down a stable enough, clearly defined enough “I” to belong straightforwardly to identifiable social groups and be the bearer of formal rights on that basis. You know?

So I guess I like when poetry asks questions about those identifications and boundaries, pokes at them and sings about them, which could be a way of saying I think poetry’s relationship to autobiography is interesting when it’s flirtatious, irreverent, and curious. But I don’t think that’s the only possible relationship between the two. Probably an abundance of relationships are possible, except no relationship (since, in this case, the disavowal still produces a relationship).

B*H: Do you have a favourite poem in the book?

DSK: I feel like my tastes are too mutable to choose one fave consistently, even among my own poems. But the long (or medium-length but spread-out) poem “trans-socialist” feels like a kind of centre of gravity in the book, and not only because of the literal reference to transness and socialism in the poem’s title lol.

B*H: Plenitude makes nods to the “prophetic tradition” and “messianic time.” These references recall Jewish, Marxist philosopher Walter Benjamin, whose messianic theory of history sees redemptive possibilities in the present moment. For him, there is hope that we might recognize sparks of revolutionary potential in the past. Was Benjamin an influence on this book? What does the messianic mean to you?

DSK: Cool question, and it’s reminded me of something I’d half forgotten, and actually don’t think I’ve mentioned to anybody: the working title of the document that became Plenitude, where I collected the poems I was writing after not having written poems nearly at all for years, was “To Make Time Start Again.” Which I’d struggle to explain, at least succinctly, but which meant to me something along the lines of: I wish to be in the world differently, and am writing towards that possibility.

When I think of Benjamin’s “Theses on the Philosophy of History,” where the “messianic time” term appears, often I think of the line in it that recounts revolutionaries spontaneously shooting at clock-towers across Paris. A longing for rupture with deathly continuities, stultifying forms of momentum. (Aimee Mann also has a good song about this.) For me, the messianic means that kind of rupture, or the longing for it, or both.

B*H: What surprised you about writing Plenitude?

DSK: That it became a book that other people proved to be interested in. Especially early on, I was mostly writing it just for myself. To make time start again. I didn’t really think of myself as a poet anymore, or at least not one who published poems. I sent the manuscript to my literary agent a couple of years later, just in the spirit of, like, “Is this something?” She felt it was something, which I experienced as a real surprise. It’d be hard to overstate what a difference that support made to me. (Thanks, Stephanie!!)

B*H: What do you hope readers will take away?

DSK: Comfort and encouragement and pleasure. A feeling of being less alone in their political intuitions and desires; a feeling of the potential availability of a “we” that might articulate those desires and struggle for their fulfillment together. A sense of possibility.

Daniel Sarah Karasik (they/them) is the author of five previous books, including the poetry collection Hungry and the short story collection Faithful and Other Stories. Their work has been recognized with the Toronto Arts Foundation’s Emerging Artist Award, the CBC Short Story Prize, and the Canadian Jewish Playwriting Award. They organize with the network Artists for Climate & Migrant Justice and Indigenous Sovereignty (ACMJIS), among other groups, and are the founding managing editor of Midnight Sun, a magazine of socialist strategy, analysis, and culture. They live in Toronto.