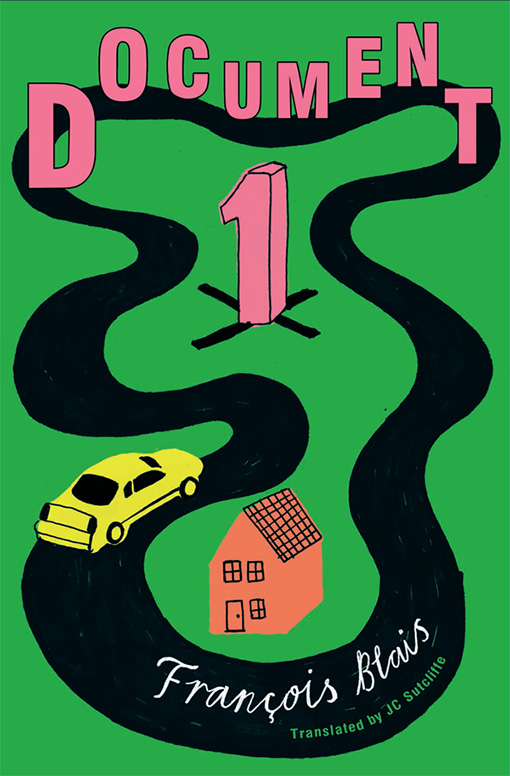 For this week’s edition of Feature Friday, we’re thrilled to bring you an excerpt from Document 1 by Québécois author (and underground superhero of French writing) François Blais,  translated into English by JC Sutcliffe. The latest title in our award-winning Literature in Translation Series, Document 1 is a tragicomic tale of two dreamers and their quest for adventure, as well as a satirical take on the world of arts and letters. It’s also very Funny, smart and wonderfully human.

Tess and Jude live in small-town Quebec and spend their time travelling all across North America—using Google maps—which provides them the luxury of adventure while remaining in the comfort of their own home. But Tess and Jude are dreamers, and their online adventures eventually give rise to a desire to actually travel somewhere. They settle on Bird in Hand, Pennsylvania, and begin scheming to raise the cash they’ll need for the trip.

Brian Francis writes that Document 1 is “a perfect mix of humour and bite”, calling it the “best go nowhere travel adventure book I’ve read in a long time.” Amy Jones adds that, “Ridiculous and hilarious, completely unique and yet overwhelmingly relatable, Document 1 is a quirky little gem of a book.”

We hope you enjoy this excerpt from Document 1. Happy Reading!

One amusing and instructive way of learning about America is exploring the Family Watchdog website (www. familywatchdog.us), a service that allows American citizens to learn whether anyone in their neighbourhood has been convicted of a sex crime. The home page asks for the name of a town. Let’s choose one at random: Anchorage, Alaska. A map pops up with a constellation of little coloured squares corresponding to the houses and workplaces of criminals. These offenders are categorized into four types: “offence against children” (in these cases, the criminal’s house is represented by a red square, and his workplace, where applicable, by a burgundy square); “rape” (“offender home” in yellow, “offender work” in white); “sexual battery” (do you know what that means?) (“offender home” in light blue, “offender work” in dark blue); and “other offense” (“offender home” in light green, “offender work” in dark green). In cities with a high population density, the map disappears entirely under little coloured squares, which looks very pretty. Seven hundred and twenty-five people have been convicted of sex crimes in Anchorage, in addition to 509 “non-mappable offenders,” whatever that might mean. Let’s click on a little red square (home of a child rapist) near International Airport Road. This brings up the photo and ID sheet of one Douglas Dwayne Martin, currently residing at 4521 Cordova Street, Apartment 4, Anchorage, AK 99503, and working for Alaskan Distributor. Mr. Martin (forty-eight years old, five-foot-ten, 160 pounds, white) was convicted on November 9, 2000, of the following charge: “Attempted Sexual Abuse of Minor 1.” If we zoom in a bit, we spot a second little red square right in the same place: another pedophile lives in his building, or in the one right next door. Or maybe they’re roommates?

Another go? Let’s take Dallas. Maybe I’m prejudiced, but I think there might be some good fishing down there… Aaaand I’m not wrong: it’s quite the avalanche of little coloured squares. Especially red ones. It’s bizarre, you’d think everyone in Dallas spent their leisure time doing nothing but kiddy-fiddling. (And don’t forget that the site shows only the ones who got caught…) There’s a big circle all around Harry Moss Park, about fifteen reds and one blue (“sexual battery”). Twenty-two sex offenders within a half-mile radius, Family Watchdog tells us. Maybe not the best place to raise your little family. A random click and here comes the photo of one Richard Allen Haskell (7522 Holly Hill, Apartment 3, Dallas, TX 75321; sixty-seven years old, sixfoot-four, 219 lbs), who looks, at first sight, like a completely harmless old guy. Let’s see what he’s accused of: “Possession of child pornography.” No doubt it was all just a misunderstanding; he must have downloaded it by mistake while trying to sign in to his email. Old people are useless with computers.

One last one? (Personally, I could spend hours doing this.) Let’s try somewhere quiet this time. Hmm, let’s see. Aha! Here we go: Cheyenne, Wyoming. Everyone there is chaste and pure, I’d swear to it. Or maybe not. Holy crap! There are perverts in Cheyenne! You’re not safe anywhere. Now, who’s hiding behind this little green square at the corner of Missile Drive and Round Top Road? None other than Ron Ernest Schneider, a big red-faced guy with a moustache, which didn’t hide the smile on his ID photo. Six foot, 310 pounds, a good specimen of a man. You wouldn’t have wanted to be in his victim’s place on December 12, 2003, when he committed a “third-degree sexual abuse.” Going by the date, it might have happened at a work Christmas party. Can you really hold that against him? I mean, who hasn’t committed a third-degree sexual abuse after one drink too many?

Jude and me, we weren’t just about the sex tourism, we also liked wandering aimlessly around the world—particularly around America, in fact, for reasons that will be explained later—thanks to Google Earth, Google Maps, and Bing Maps. For example, you can tour the Gaspésie in twenty minutes, soaring above Highway 132, clicking on the little icons along the way that indicate images uploaded by volunteer contributors. (Thank you to JMRioux for the beautiful photo of Querry Falls in Caplan, to Simore for the view of the Bonaventure quay, to Paul Langlois for having informed us that Mont-Joli is the world capital of outdoor murals. After that, we head west totally at random. We travel thousands of kilometres with one quick movement (just a few centimetres to the left on the mouse pad), ending up near Minneapolis. Then we zoom in on the posh end of town (it’s easy to spot tony areas on the map: they’re near green spaces and away from highways), and have a nice little jaunt around Kenwood Parkway, a beautiful wide avenue lined with hundred-year-old trees. The house at number 886 is as big as a school! We swoop in front of the Hubert H. Humphrey Metrodome, home of the Twins, we roam the banks of Lake Nokomis, we amble toward downtown, then we head south again. We jump the four hundred kilometres separating Minnesota’s metropolis from Des Moines, Iowa. We’d better see what the buzz is down here. Fly low over Grand View University. Not much going on, it’s all very peaceful, but let’s just note in passing that the Des Moines fire hydrants are yellow. Another crucial piece of information to take up storage space in our brains. There’s not much happening on Euclid Avenue either, even though it seems to be one of the town’s main commercial streets. Lots of vehicles (trucks in particular), but no pedestrians: apparently strolling is not the done thing in Des Moines. All right, let’s tear ourselves away and head west, toward Nebraska. We fly over Omaha without stopping (something tells us that Omaha and Des Moines are much of a muchness) and are heading along Interstate 80 toward Colorado, when a name catches our attention: Cozad. “What’s Cozad?” we ask Wikipedia, which speedily tells us that it’s a town in Dawson County with 4,163 inhabitants (according to the 2000 census), whose main—if not only—feature is its position on the hundredth meridian. A huge sign on the way into town points this out. We double-click randomly on Meridian Street, just to check, for surely the people at Google Street View won’t have taken their photographerly zeal to such an extent as to photograph the streets of Cozad. But look, believe it or not, that’s exactly what they have done. And what does Cozad look like? Meh! Bungalows, commercial buildings, cars, more bungalows, a municipal airport, a few factories, and yet more bungalows. And if you really must know every single detail, the people at 60 Gatewood Drive were about to do some landscaping when the picture was taken. There’s a tractor in the alley and a Werner’s Sprinklers truck parked in front of the house. And that’s the juiciest piece of local gossip we could winkle out. We leave Nebraska and carry on in a southwesterly direction, skipping over Colorado, where no place names catch our eye, and head into Arizona airspace. Right by the New Mexico border there’s a godforsaken little place by the name of Fort Defiance (a little over four thousand inhabitants, ninety-two per cent of whom are Navajo Indians). We try to see what it looks like on the ground, but there’s nothing to see. Here we have one of those rare places snubbed by Google Street View; when you think that they went to Cozad and Saint-Georges-de-Champlain, it’s pretty insulting to the people of Fort Defiance. Now we’ll never know what Water Tank Road looks like. Too bad. Anyway, we’ve had our fill of the back of beyond: let’s go and look around downtown Phoenix. Returning to civilization will do us good. But nooo! Phoenix is super-ugly, like Trois-Rivières West with palm trees.

These American small towns are like episodes of The Young and the Restless: once you’ve seen one, you’ve seen them all. But it never dragged; we’d stay up late in front of the screen, roaming the streets of Edmond and spying on downtown Oklahoma City via the webcam on the roof of city hall, going into raptures every time a passerby appeared in the frame. It wasn’t exactly that we despised ordinary cities—Rochester, Cape Breton Regional Municipality, Harrisburg, or any of those charmless, functional agglomerations you only ever hear about on the sports channels (“The Washington Nationals have called up outfielder Manolo Perez from their minor-league team, Harrisburg”)—but we did have a particular predilection for places with stupid names. As soon as we saw one that caught our attention (pro tip: fly low if you want to find them; it’s usually the small places that have moronic names, and if you fly too high over the map, only the names of big places will show up), we’d stop there and spend some time wandering the main streets. Next we’d go and ask Wikipedia everything there was to know about the place. Most of the time, there wasn’t much to say (Chocolate Bayou, Texas, has the nerve to call itself that without any explanation as to why; ditto for Scissors and Ugly), but every once in a while we’d come across a fantastic story.

Order your copy of Document 1 here.

François Blais is one of the most exciting contemporary voices of Quebec literature. Considered an underground superhero of French writing, he is the author of 9 novels and a collection of short stories. Document 1, which was released in French in 2013 to great critical acclaim, is his first novel to be translated into English.