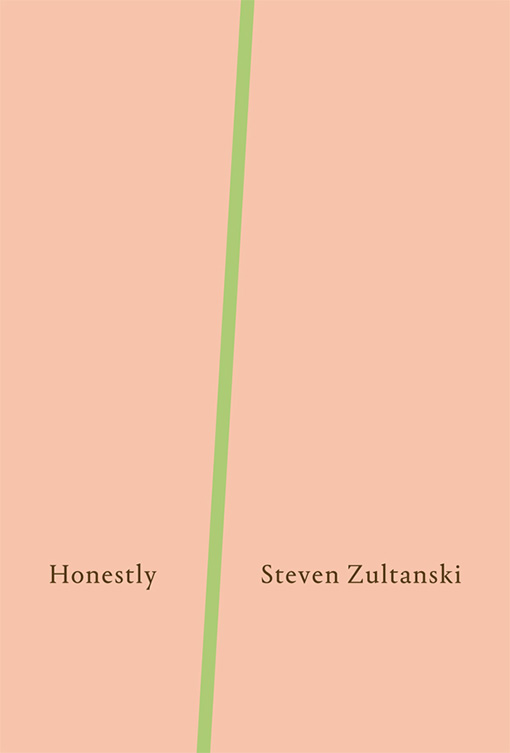 Steven Zultanski’s latest book, Honestly, is the third title in a trilogy (and also his third publication with Book*hug) that explores the limits of individual expression. It begins with research into a forgotten relative who was kicked out of the author’s family after he was jailed for conscientious objection to WWII, and who then moved to New York to become a composer. From there the book swerves into a series of minor-key personal anecdotes, interlaced with conversations with friends about work and relationships. Throughout, communication is framed by the economics and psychology of the home. Dialogue takes place in close quarters—constrained by money, space, ego, and empathy.

Chris Kraus, author of the cult favourite I Love Dick, writes that, with Honestly, Steven “loquaciously monologues about everything from municipal corruption to asparagus horticulture with charm and authority.” Poet and blogger Rob McLennan says that  “once opened [this book] is extremely difficult to put down again.” Author Andrew Durbin adds that, “Honestly gives us what we seem to need most: the real and the true.”

Book*hug intern Mary Ann Matias recently sat down with Steven to discuss his new book, as well as the act of intimate listening, collaboration, brevity and the short book, building frameworks and much more.

Mary Ann Matias: Tell us a little bit about your book and how it came to be.

Steven Zultanski: Despite its brevity and lightness of tone, this book was a struggle to write. Originally, I gave Book*hug a different manuscript with the same title: a series of bitter dialogues, couples bickering in lightly sci-fi scenarios. The original manuscript perhaps had the virtue of being more bonkers than the final book, but I came to think of it as too cynical, too anxious, too boyishly invested in unhappiness and misunderstanding. So then I wrote a more essayistic, more earnestly personal book, but I scrapped that too. It was overly indulgent in cheap thinkpiece-y conclusions, faux-philosophical vagaries gleaned from the minutiae of experience, etc.

The final book is largely composed of conversations with others. I wanted it to be a book of listening. I wanted it to feel personal (not necessarily confessional, but intimate), in the sense that intently listening to someone is personal, regardless of content. There’s intimacy even when (and sometimes especially when) the story is banal. Except for the opening section, which concerns buried family history and situates the author as the narrator, I simply asked friends to talk to me, and I wrote down what they said. Then I changed names and genders (in a skimpy attempt to protect privacy) and edited their words into short vignettes based on recurrent themes: housing, work, communication.

At the end of the process, when I was panicking over the shape of the book, my friend Aaron Winslow, who is a terrific science fiction writer (I can’t recommend his novel Jobs of the Great Misery enough) and has a great feel for plot, helped me arrange and edit these vignettes.

For a long time, I’ve been thinking about how contemporary poetry is ostensibly interested in polyvocality—but often, material gathered from different sources is so chopped up and fragmented by poets that the various voices are dissolved in the technique of collage. So even though the vocabulary and phraseology might come from recognizably disparate discourses, the poems don’t actually read as polyvocal: as a reader, one mostly remains attentive to the sensibilities of the collagist. Which is often interesting, and has resulted in a lot of great work, but doesn’t really let much air into the authorial voice.

I don’t have any big theoretical claims to make about this, but I wanted to write a book that forefronted others’ language, their way of speaking, the rhythms of their sentences, etc. I wanted the intimacy of the book, the illusion of the proximity of the narrative voice to the reader, to be produced by listening: the reader listens in on the narrator listening. The personal content of the stories is important, and hopefully moving, but ultimately, it’s not the most important part: I hope the formal attempt to figure listening is what stands out about this book.

MM: What are some other influences for your work, besides writing? Music, visual culture, science, etc.?

For example, Jake Meginsky and Neil A. Young’s Milford Graves: Full Mantis is a portrait of the great drummer. The camera rests on objects in Graves’s home, and on Graves himself as he talks about his life, his music, and his philosophy. It’s an unhurried film; its editing doesn’t mimetically respond to the pace of Graves’s drumming, but it does respond to his sense of rhythm as an attentiveness to the flux of life at a micro-level: the movement of leaves in the wind, the changes in the beat of the heart. It’s a wonderful example of portraiture that remains true to its subject, and doesn’t try to drown the person in linear biography.

Outside of documentary, I loved Miguel Gomes’s Arabian Nights trilogy from a few years ago, which strung together a series of semi-allegorical vignettes about daily life under austerity in Portugal. I’m thinking about those movies a lot as I work on a fiction project. They are politically legible, but scrappy: the allegories almost feel unfinished, as if they were just about to map cleanly onto political situations.

And, even though I would disagree with some of its political and theoretical conclusions, I thought Anna Tsing’s The Mushroom at the End of the World was inspiring in terms of literary form. It’s a book of anthropology, tracing the commodity chain of an expensive mushroom across landscapes and cultures; it’s composed in short chapters detailing Tsing’s research, travels, and interviews: it moves from portraits of landscapes to descriptions of supply chains to interviews about the fragmentations of cultures to speculations on future land use in the face of environmental destruction.

Those are just some influences, off the top of my head. I have many more influences. I listen to Merzbow all the time. I’m sure that does something to my writing, haha.

MM: With this book completed, how do you imagine your writing will go moving forward? Are there certain influences or lessons you’ll be taking from this project into the next?

SZ: I have a book coming out with Information as Material in a month or two, On the Literary Means of Representing the Powerful as Powerless. The title, I suppose, is self-explanatory. It’s an essay-poem that moves through plot summaries and commentaries on a variety of books (mostly fiction) to argue that literature has a special tendency to depict power as inherently weak, stupid, and conditional. I don’t present a theory about why this is so; rather, the book is a catalog of examples and digressions.

Also, I’m collaborating with Alejandro Crawford on a novella and VR game. I’m writing the novella, but we’re developing the plot together. And Alejandro is designing a game in which one of the scenes will be playable. He’s brilliant, and has a very additive sensibility; one idea leads to another to another. It’ll be a whacked-out game.

Apart from these projects, I’ve got a number of other ideas on the back burner. Hopefully I’ll start working earnestly on some new writing later in the summer and fall.

Honestly taught me something about building frameworks for the inclusion of other voices, and it taught me about brevity. It’s a little book. And for now, I only want to write little books. Just as I like art that moves deftly between disparate aspects of reality, building or dismantling relations between things, I also like the idea of working on short books, so that one project becomes a springboard for or rebuttal to another. It’s not that I want to write as many books as possible (after all, I throw out much of what I write), it’s that I want to keep moving.

MM: What are you reading now, and what’s next on your reading list?

SZ: Speaking of little books, I’ve been reading everything (that’s translated into English) by César Aira. I love his madcap plots, the way silly set-ups telescope out into more abstract or philosophical passages, and then fall back to earth with slapstick and broad humor. And, like the Gomes movies I mentioned above, Aira’s books have a nice near-allegorical quality to them, approaching the representation of specific political situations but leaving many of the lines undrawn.

And there’s been some great recent small-press poetry: the new books by Brandon Brown and Bridget Talone (both on Wonder) are terrific. And I loved Astrid Lorange’s Toast for Friendship, published by Troll Thread. I’m excited for Ugly Duckling Presse’s Laura (Riding) Jackson reissues, and the new Simone White book they just put out.

I like that so many poets are experimenting with essay and narrative forms right now. It seems to me like we are entering a moment where genre boundaries are less respected, and writers are moving between poetry and fiction and theory and personal essay and documentary and other genres. That’s one of the most exciting things happening in literature, I think: the interest in multiple genres, the refusal to take the form of the poem for granted, and the contamination of styles.

Order you copy of Honestly here. 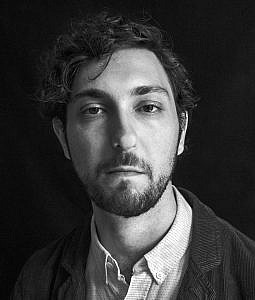 Steven Zultanski is the author of five books of poetry, most recently On the Literary Means of Representing the Powerful as Powerless (2017) and Bribery (2014). His critical writing has appeared in 4 Columns, Art in America, the Los Angeles Review of Books, Mousee, and elsewhere. In January 2017, an art exhibition inspired by his book Agony (published by Book*hug in 2012) entitled You can tell I’m alive and well because I weep continuously was shown at the Knockdown Center in Queens. Steven lived for many years in New York City but now resides in Copenhagen, Denmark.