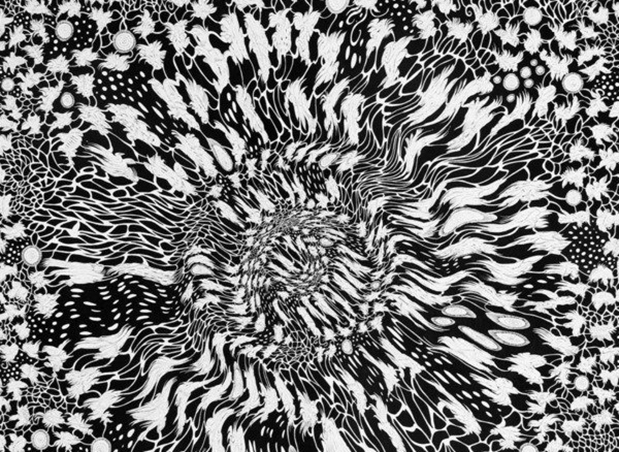 Drawing from philosophy (including Pre-Socratic materialists, Nietzsche, and Spinoza), A Spectacular Influence is an exercise in extreme perception. With clear lines and minimalist language, the poems solicit movement in melancholy as a way of celebrating the intimate role that each of us plays in the collective human experience. A mesomorphic tour de force in four short suites, A Spectacular Influence adopts in each section a hyper-perceptive, precariously bodied voice, floating like a cloud, a spirit, or a film camera along the edge of extreme action: a murder, a bombing, a wartime massacre.

A Spectacular Influence holds a linguistic magnifying glass up to core subjects at the foundation of our very humanness, dwelling on the Spinozan questions Is consciousness an illusion? and How do metamorphoses arise within the collective?

Across the poem’s four sections we encounter a dwindling consciousness as it celebrates the confusing experience of existing at a point just beyond being alive; the soul of a body remembering what dancing feels like as bombs go off all around it; a person awash in primordial calm after murdering their lover; a body imperilled and questioning the certainty of physical existence.

In its panoply of voices, A Spectacular Influence demonstrates the power of observation—of paying attention to the material dimension as a bridge, as a way of being alive and connected to the world. Shocking and immediate, the voices cultivate a kind of radical empathy (a fullness of being, free from judgment) in the face of violence and bereavement. In this rich and graceful translation by acclaimed author and translator Nathanaël, Neveu’s poetic perspective invites us to consider that, in our inevitable connection with the world, “I am a human, and nothing human is foreign to me.”

Praise for A Spectacular Influence:

“In this book, magnificent with density, the most external events are retranslated into intimate events. The writing produces effects of counterpoint that seem to layer several melodic lines tied one to the other. And it is there, in that musical space, that the body is exposed: something arises that changes it, jars it, modulates it, brings about a state or a motion that is the sign of life beating.” — Alexis Lussier, Spirale Magazine

“[A Spectacular Influence] traverses the question of the representation and the place of the body in the midst of the fluctuating settings that surround us.” — Nicolas Tardy, Cahier Critique de Poésie

A Spectacular Influence by Chantal Neveu is available now. Order your copy here.

Thursday November 19, 2015
School of the Art Institute of Chicago presents a reading and talk with Chantal Neveu, author of A Spectacular Influence by Chantal Neveu, translated by Nathanaël.

Excerpt from A Spectacular Influence by Chantal Neveu, translated by Nathanaël

Concrete like fragmented rock deposited
in a room. Concrete like a marble head
alongside a decapitated body. Incongruity
of broken displaced stone, my skull,
separated from my body, I don’t move.

“You cannot have the bodies now; come
back later.”

There are no more jaws, they have no
throats, there are dead bodies, flesh on
bones. There are bodies of mythic men,
Aphrodite’s bodies, with or without a head,
flesh of limestone, granite. There is the
thought of men who sculpted magnificent
bodies. Magnificent as a pleonasm. A
phantasm.

Missing is the thought of the men who
invented gods. Missing are the heads, in
marble, limbs, shoulders, noses, abdomens.
Missing are fifty-one Albanians, even if the
fifty-one bodies are returned headless.

I looked at the marble bodies, I invent the
thinking of the men who invented gods.
I hear the word “Albanian,” I invent men,
living, mortal. I hear “fifty-one,” I see a
mass of men, all of humanity, thinking
heads and bodies. I hear “the jaw torn off,”
I see the violence, bloody. And I hear “by
shells,” men think war, men move shells.

Shells explode on the radio.

Marble women were being deposited
alongside the dead bodies of mortals in
the tombs of the Cyclades. Violin-women,
arms crossed over their rounded bellies.
Long throats, armless over their striped
bellies. The women of flesh, standing over
the tombs, the stomachs, the throats, will
remain, separated.

Between my head and my body, I have
no more throat, I don’t hear the scream I
want to scream. Is it the sound of a violin?
No. A cello. Does death still exist?

It is not cut stone, it is not an Aphrodite
head, nor the dismembered body of
Dionysus, nor the decapitated body of
Zeus, the large torso above the folds of
the drape. A numbered assassination, the
massacre of death.

The beauty of the marble bodies, the grace
in the traits of the pink stone. I looked at
what is missing between the limbs, the
bodies, between the bodies and the heads,
I looked at the masks, the bronze helmets.
I don’t know what there is between the
flesh of the stomach, the helmed head at
war, what there is between the head, the
torso. The flesh on the bone of the skull
beneath the helmet is not stone, the blood
in the hair is not marble lines. There
isn’t just the neck, the nape. The throat,
a matter I don’t know. I am with what is
missing and with what is not. I don’t have
a shield. I am naked in my pants.

My head, detached from my body, my
body, dead wood, am not lying down, I
sit, my arms hanging, my body the chair
I am on, I am a head on a chair and I keep
watch.

I see a cat pass, dead not dead, I sleep, am
not dead. Because my body a chair, I could
defenestrate, pull on the chair.

Concrete sounds, no nuance. Everything
is equal, continuous noises, spiralled
rumble, it could be a motor, metallic
noises, stridences alternating with spaces
of silence. The sound of a detonation, a
silence, immense, time in suspension. The
noise, the cry, the silence or the sound of
the detonation, a silence, which is more
incongruous? Life takes up again. Sheets
appear from above, women have thrown
sheets, the bodies are being covered, down
below. Are they already dead? Still living?

My head, facing a head with its skull open,
flesh hanging. I remove the white worms
from the greenish flesh. The face on the skull
is looking at me, its eyes are looking at me,
don’t see me. I look at its eyes, the worms
move above its brow. With tweezers, I
remove the living worms, I throw them, one
by one, on the ground. I don’t hear the sound
of the maggots, the ground, soft, my chair
falls, I can’t see the face any more.

The bronze, the strings, it is not my
voice, the head covered with a sheet, the
suffering deafens me. Marasmus.

I am not credible. I say I am a head, a
chair, the sound of the cello, the wind,
the nothing that I do, this that I suffer,
this that I invent. What there is between
the sheet and the sound of the voice, the
dance without my chair moving. Love.
Space separates my chair from your body.

Your body covered with a sheet, you are
not dead. Aphrodite is a sound, you are
an ensemble. My head at the centre of
your belly, you tilt back on my chair. You
scream. I think the wind while throwing
the dead wood outside.

Your throat above your body, the cello,
your round belly, arms crossed, your flesh
similar to limestone, the cat passes, looks
at you. The gods exist only because we
invent them.

I move about in the noise I hear.

Chantal Neveu is a writer and an interdisciplinary artist. She is the author of the books Une Spectaculaire influence (2010), Coït (2010; translated into English by Angela Carr and published by BookThug in 2012), and mentale (2008). Her interdisciplinary textual projects include Èdres followed by Èdres | Dehors (2005) and Je suis venue faire l’amour, among others. A Spectacular Influence, translated by Nathanaël, is Neveu’s second book to be published by BookThug. She lives in Montreal.

The (self-)translating author of more than twenty books, Nathanaël writes in English and in French. Her recent works include Sotto l’immagine (2014), Sisyphus, Outdone. Theatres of the Catastrophal (2012) and Asclepias: The Milkweeds (2015). Nathanaël’s extrinsic translations include works by Danielle Collobert, Édouard Glissant, Hervé Guibert, Catherine Mavrikakis, and Hilda Hilst (the latter in collaboration with Rachel Gontijo Araújo). Nathanaël lives in Chicago.