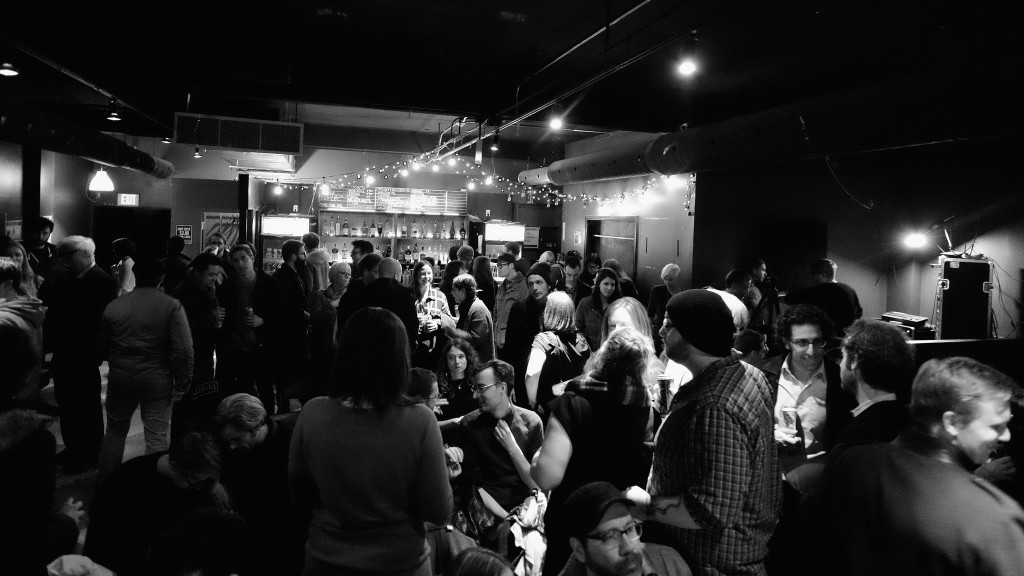 Clocking in at ten (count-’em, ten!) adventurous, innovative titles, Spring 2015 was BookThug’s biggest season ever. Authors came from far and wide for the Spring Launch Party in Toronto, and BookThug supporters came out in droves to ring in the new season. Happily, our indispensable media guru John Schmidt was there to document the event.

Opening to a packed house, award-winning playwright Daniel Karasik read a memorable dialogue from Little Death: A Play. A gripping study of sexuality under extreme pressure, Little Death premiered in April 2015, as part of the RISER Project at the Theatre Centre in Toronto.

“Karasik is one of Canada’s most exciting young dramatists. With Little Death he is asking juicy, red meat questions about sex, meaning, and mortality. It is a little gem of a play; finely crafted and timeless.” — Jordan Tannahill, winner of the 2014 Governor General’s Literary Award for Drama for Age of Minority: Three Solo Plays

Up next, Lesley Battler read from her debut poetry collection Endangered Hydrocarbons—a high-concept confessional opus about our oil-addicted society, from the point of view of a Canadian Big Oil insider.

“Lesley Battler’s fabulous Endangered Hydrocarbons is a high-octane romp through Alberta’s oil patch… a tour from office tower cubicles to bitumen sands extraction sites. But it’s as though the excursion is conducted jointly by the spirits of Edward Snowden, Groucho Marx, and Lewis Carroll… Battler distills, blends, and blurs the jargons of geology, chemistry, oil exploration, drilling technologies, and corporate spin.” — Tom Wayman

Carellin Brooks mesmerized the audience with three snapshots from her luminous novel One Hundred Days of Rain. In prose by turns haunting and crystalline, One Hundred Days of Rain enumerates an unnamed narrator’s encounters with that most quotidian of subjects: rain. Mourning her recent disastrous breakup, the narrator must rebuild a life from the bottom up. As she wakes each day to encounter Vancouver’s sky and city streets, the narrator notices that the rain, so apparently unchanging, is in fact kaleidoscopic.

“That the world comes down on us if we make art of it or not is true. Rain is the agent of how much is beyond our control, thus this book opens into such questions as how to fully inhabit both loss and beauty and how to let the natural world save you. Brooks doesn’t profess; she asks and observes.” — Lambda Literary Review

Anchoring the first set of the evening, poet and self-described political hack Jimmy McInnes blew the roof off the place with an incendiary reading from his radical new long-poem, A More Perfect [. A reverse-rhetorical translation of Barack Obama’s iconic 2008 speech “A More Perfect Union,” A More Perfect [ celebrates and interrogates the calculatedly broad art of the political campaign speech.

“A More Perfect [ demands to be read and rewards the reader. Far from Goldsmith’s assembly-line literature, each line bears the careful marks of a wordsmith, and I think McInnes’s own formulation, ‘exoskeletal poetry,’ warrants wider adoption. It reminds us that experimental poems are often sturdy, iridescent containers for the careworn pieces of speech that we use every day. A More Perfect [ will change you, or at least the way you hear politics.” — National Post

Bringing us out of the intermission, Kelowna poet Jake Kennedy enlisted the help of TeenThug Reid Millar to create a poly-vocal, hyper-emphasized rendition of one of the many gorgeous lyrics from his new collection, Merz Structure No. 2 Burnt by Children at Play. Jake also regaled the audience with a legendary story ripped from the annals of BookThug history.

“[Merz Structure No. 2 Burnt By Children at Play] concerns itself with discovery and being lost, and how one can only truly be achieved through the other, composing a series of striking poems deliberately meant to occasionally unsettle, forcing a deeper attention of his incredibly sharp and precise poems.” — rob mclennan’s blog

Next, the inimitable Pearl Pirie took to the stage to read from her excellent new collection the pet radish, shrunken. In true Pirie style, this fresh, quirky, and clear-seeing collection speaks in a range of forms and voices: From a military convoy of turtles, to a Kafkaesque conversation with a housefly, to the dissection of a fruit machine, Pirie offers oulipo found speech as it integrates and disintegrates, plays with and tumbles through language.

“Precise riots of vowels and consonants rattle these poems. Pearl Pirie’s lines burn with sonic-rich images: ‘kalimba of algae’ and ‘tight loops of oops.’ Her verbal verve is rooted in an ecstatic attentiveness to language, both found and formal. Charged with innovative and lyrical energies, the pet radish, shrunken is a gorgeous rebellion.” — Eduardo Corral, author of Slow Lightning

In the spirit of his outsourced autobiography Their Biography: a organism of relationships, the enigmatic and charismatic kevin mcpherson eckhoff deferred his reading to the outstanding Jacqueline Valencia, who delivered a faux-eulogy in kmac’s honour.

“Their Biography is a collage of kevins as described by friends, family, co-workers, strangers, robots, and even adversaries. The result is not simply a construction of kevin mcpherson eckhoff, but of the bonds that tie people together.” — Contemporary Verse 2

Order Their Biography: an organism of relationships here  $12.60

Bringing the program to a close, Montreal’s Mike Steeves delivered the perfect finale: a bombastic reading from his penetrating and uproarious debut novel, Giving Up. Words fail. Watch the clip.

Thanks to all the authors and to everyone who made BookThug’s Spring 2015 Book Launch and Party such a huge success. Thanks to everyone who came out, and an especially big thanks to BookThug Web Media Consultant John Schmidt for the videos! And thanks to Pearl and Brian Pirie for the the photo at the top of this post.

Don’t forget that BookThug’s Midsummer Dream Sale is on now. Until August 2, save 30% on EVERYTHING on our online store. Visit us anytime, day or night, at BookThug.ca.