And Roses and Roses: A Spring Reading List | Book*hug Press 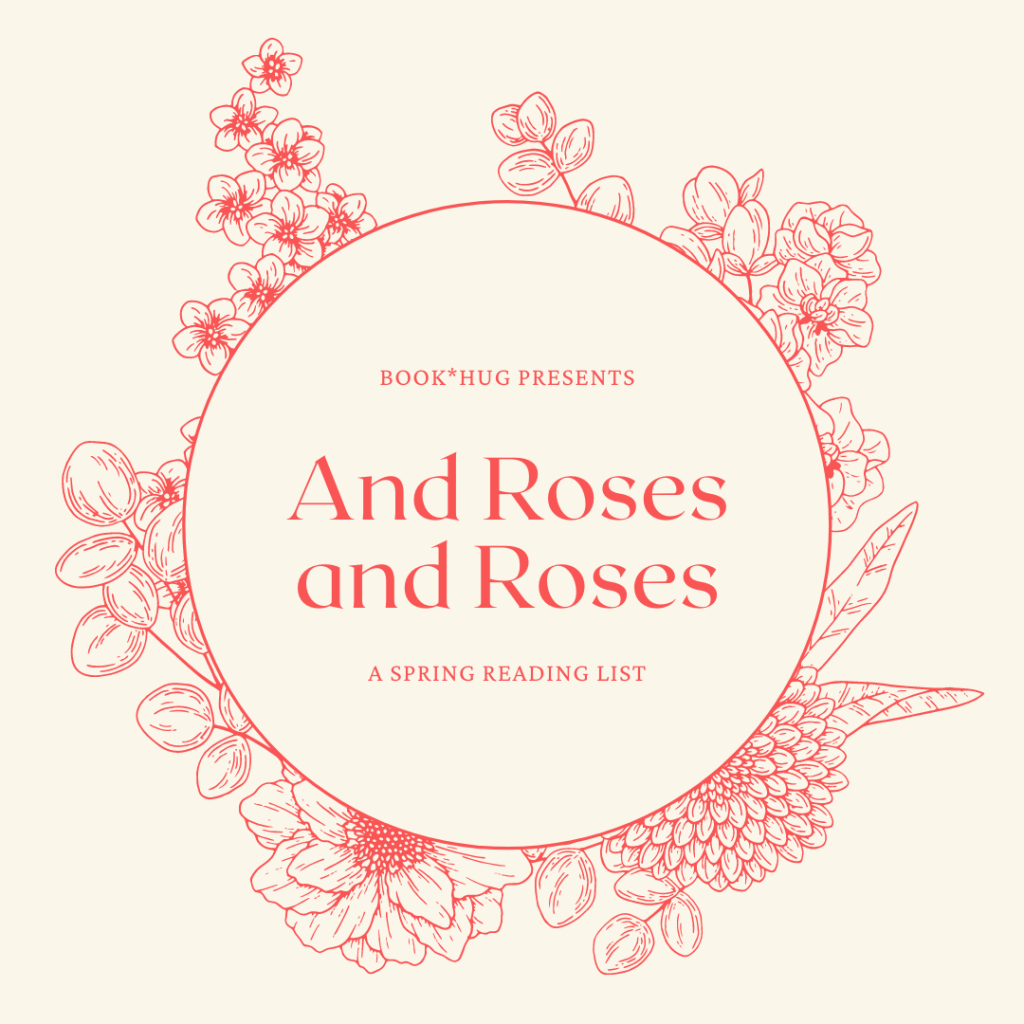 It’s officially spring! True to Book*hug form, we’re celebrating with a reading list. These titles hum—softly and otherwise—with the spirits of play, risk, and soil-deep transformation. You might feel them wrap a tendril around your wrist; let them. They’ll lead you into their lush, florid worlds, and you can take them into yours: into whatever environment you feel awakened by. 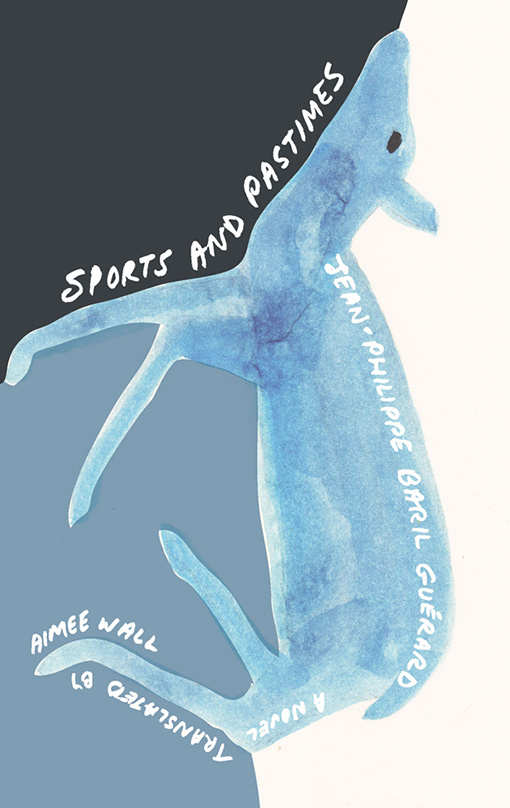 Translated by Aimee Wall (author of the forthcoming novel We, Jane), Sports and Pastimes follows the daily life, at once empty and overloaded, of a group of friends who spend all their energy trying to distract themselves with huge hits of endorphins, art and various substances. They navigate pleasure and boredom, the extraordinary and the banal, as (more or less) worthy representatives of the best and worst of what their era has to offer. Inspired by Erik Satie’s work of the same name, Sports and Pastimes is the first novel by acclaimed Montréal playwright and author Jean-Philippe Baril Guérard to appear in English. Consider it a mash-up of HBO’s Girls and Bret Easton Ellis’ Less Than Zero.

“Guérard’s short sentences (in Aimee Wall’s translation) turn on a dime, crisply characterizing both the shallow, rich youth who move in these circles and the narrator, who loves to hate them,” writes Bardia Sinaee for Quill & Quire. 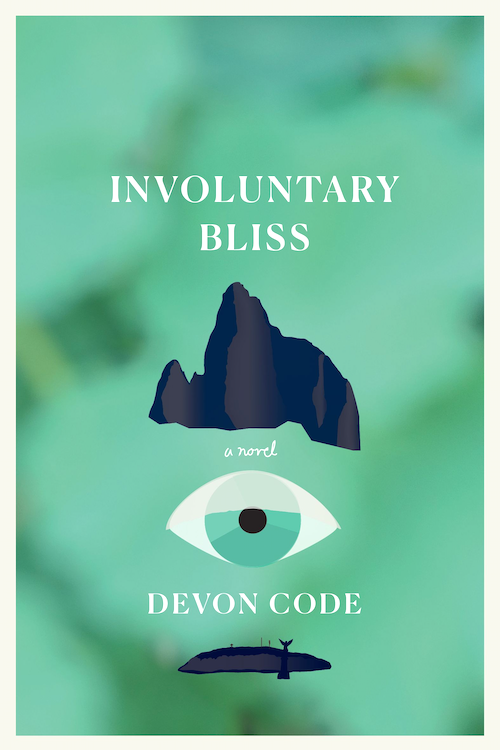 “How does one create urgency and profound emotional attachment in a novel about two characters conversing as they wander around Montreal? By writing one beautiful, brilliant sentence after another,” writes Alissa York, author of The Naturalist. Mike Steeves, author of Giving Up, calls the book “[a]lmost as disquieting as it is entertaining… a literary derangement of the senses and an elegant addition to the current stream of coming-of-age fiction.” 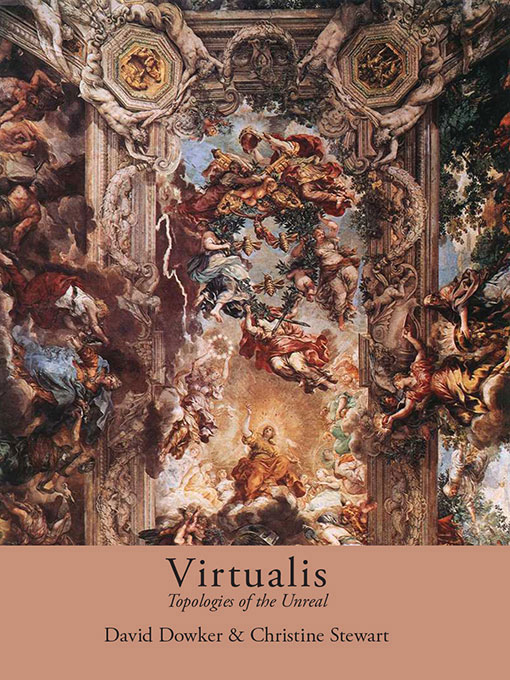 Virtualis: Topologies of the Unreal by David Dowker & Christine Stewart

Virtualis: Topologies of the Unreal is a poetic investigation of melancholia and the baroque. David Dowker and Christine Stewart have created a series of linguistic interjections that run from the allegorical barricades of the baroque to the topological confound of the modern, incorporating (for example) Medusa and the Sphinx, aestivating snails, and the alchemy of bees. Lush and extravagant, this is writing tuned in to the terrestrial spectacle, a collaborative reading of writers such as Walter Benjamin, Christine Buci-Glucksmann, Giorgio Agamben, Gilles Deleuze, Charles Baudelaire, and Arthur Rimbaud.

“Dowker and Stewart use exquisitely ornamental language to exalt the majesty of the senses in poems I found to be radically potent,” writes HTMLGIANT. “This book weaves a kind of lexical magic as threads of stunning lyricism and metaphysical fantasia so vibrant it feels like a synesthetic dream.” rob mclennan writes that “the poems in Virtualis: Topologies of the Unreal work through the abstract, deliberately ungrounded, embracing sound, and allowing the theories to spark, but the words themselves to propel.” The book was a finalist for the 2014 Stephan G. Stephansson Award for Poetry. 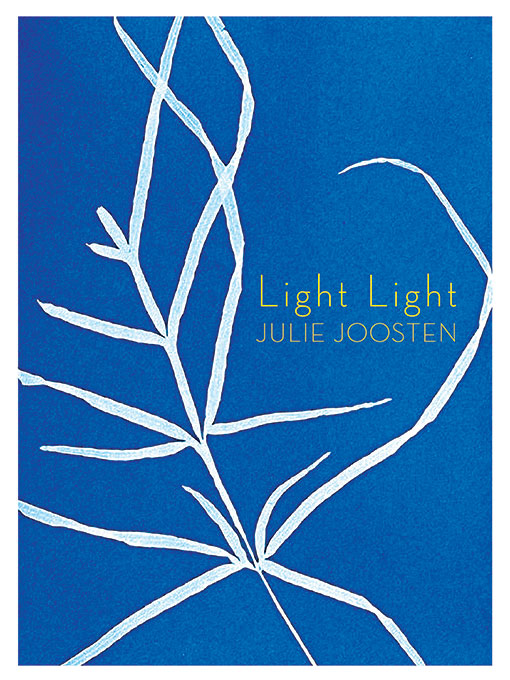 The poems in Light Light range from the epigrammatic to the experimental, from the narrative to the lyric, consistently exploring the way language captures the undulation of a mind’s working, how that rhythm becomes the embodiment of thought, and how that embodiment forms a politics engaged with the environment and its increasing alterations. Moving from the Enlightenment science of natural history to the contemporary science of global warming, Light Light bridges the histories of botany, empire, and mind to take up the claim of “objectivity” as the dissolution of a discrete self, and thus explores the mind’s movement toward and with the world.

“The collection’s keen attention to the natural order, from sun to atom, from weather to grass, is made possible because of the poet’s obvious joy and love for the world of nature,” writes Concetta Principe for The Rusty Toque. Light Light was a finalist for the 2014 Governor General’s Literary Award for Poetry, the 2014 Gerald Lampert Memorial Award, and the 2014 Goldie Awards (Poetry Poems/Collections). 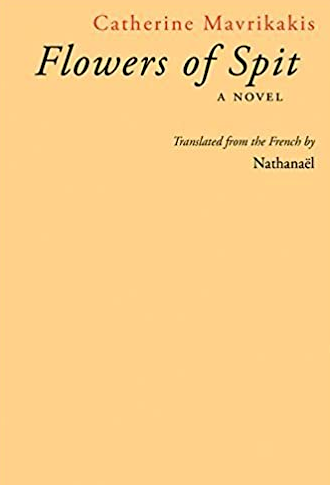 Flowers of Spit by Catherine Mavrikakis, Translated by Nathanaël

Flowers of Spit is a corrosive narrative that surrounds the inflamed character of Flore Forget. Written as a long soliloquy, this novel is a delirious howl, an expectoration in the face of the world, a dolorous dive into the depths of identity. Filled with a vitriolic rage that teeters between despair and redemption, this work propels us into the memories inherent to scorched flesh. It is an implacable story, one propelled by a raw, breathless style that strikes us where it hurts the most.

“In rich, baroque language that curls up on itself like the bindweed or the boa in heat, Catherine Mavrikakis rattles, shocks, seduces, carries away,” writes Le Devoir. “She does so in keeping with the echoes of Sarah Kane, of Céline’s syncopated phrase or the carnal and striking poetry of Jean Genet—think to his sublime Our-Lady-of-the-Flowers.” 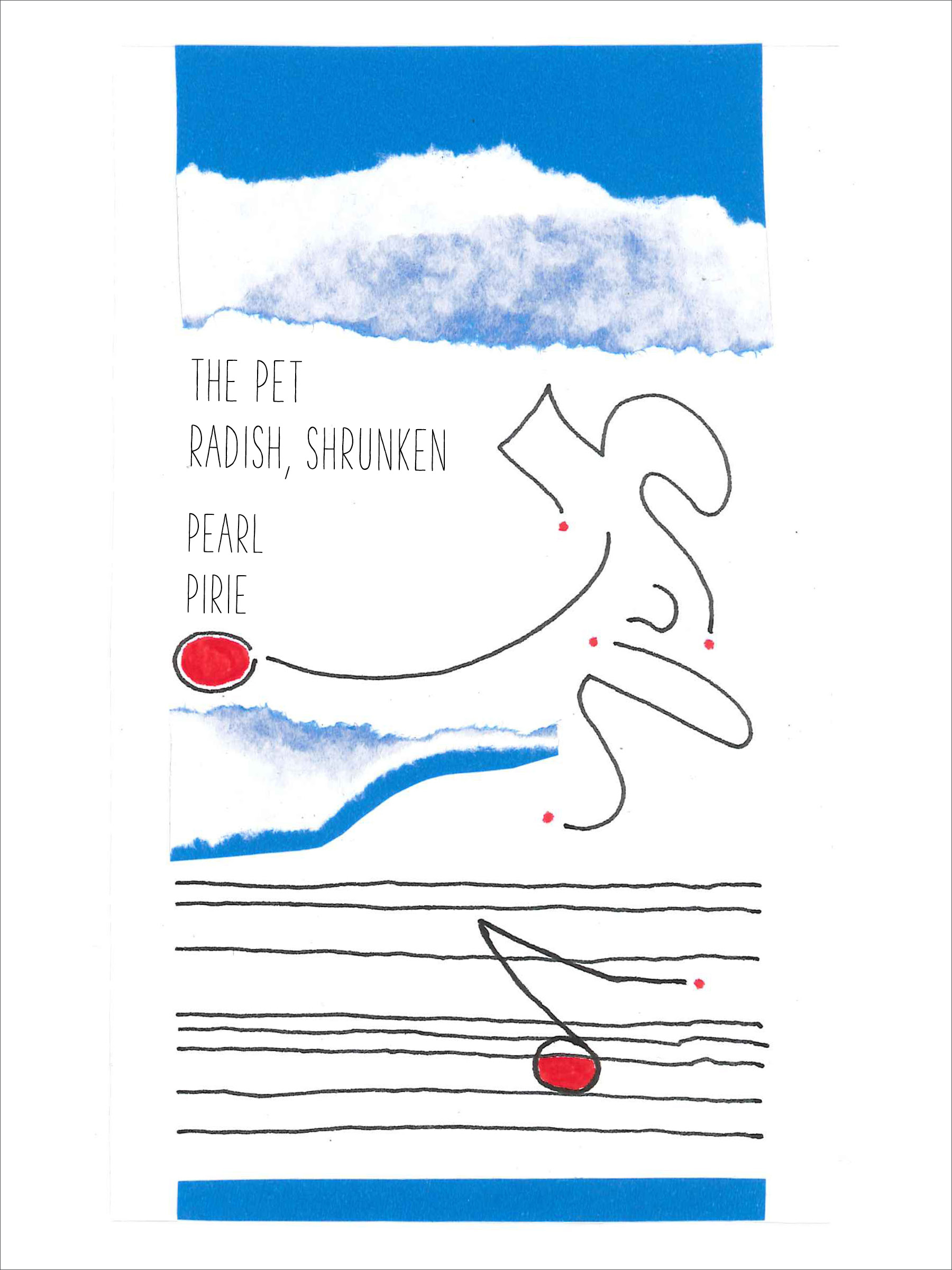 the pet radish, shrunken deals in the poetics of sound, language, and play. This fresh, quirky, and clear-seeing collection speaks in a range of forms and voices: from a military convoy of turtles, to a Kafkaesque conversation with a housefly, to the dissection of a fruit machine. In this book, poems can be exuberant laughter set to words, or an incidental collation of plays on a Scrabble board. the pet radish, shrunken will appeal to exploring minds who are ready to question language, society, and self, while not minding a taint of grief and comedy that necessarily creeps in around the edges.

“These line-by-line lyrical segments both tantalize and take the reader down the rabbit hole (pulling rabbits out of hats along the way) with their semantic surprises and jumpy music,” writes author Catherine Graham. “Pirie sees the world askew and brings the reader along for the ride.” the pet radish, shrunken won the 2016 Archibald Lampman Award. 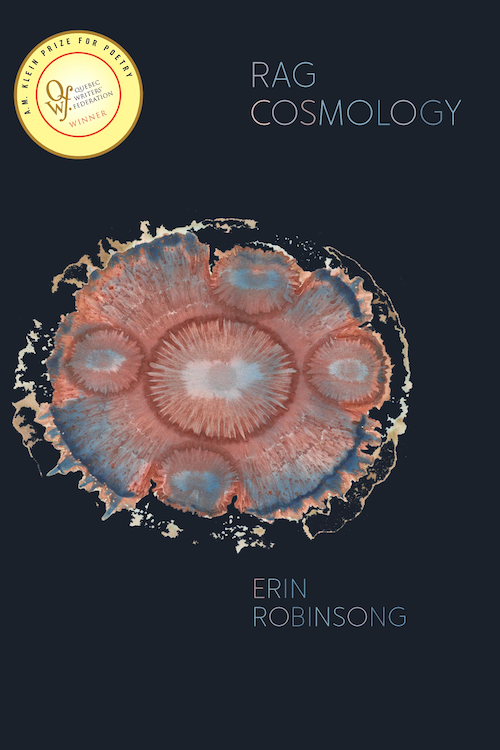 The ecological is personal; the personal is ecological. Rag Cosmology is a pulsating meditation on this most intimate relationship. These poems inject pleasure deep into the tissues of our language and state, countering fatalist narratives with the intimacy of entanglement and engagement.

“Have you ever had the feeling of being spoken by a branch, a dress, a late slant of light? Then open this book for deeper information about how sensing and moving among the world’s elements is a cosmic work of images, where touching is a kind of seeing, and thinking is a kind of kissing,” writes author Lisa Robertson. In a review for Canadian Notes & Queries, author Domenica Martinello writes, “Sex and nature cannot be compartmentalized. Life and pleasure cannot be separated. The poems in Rag Cosmology remind us that we are all part of the world’s constant intercourse.” The book won the 2017 A.M. Klein Prize for Poetry. 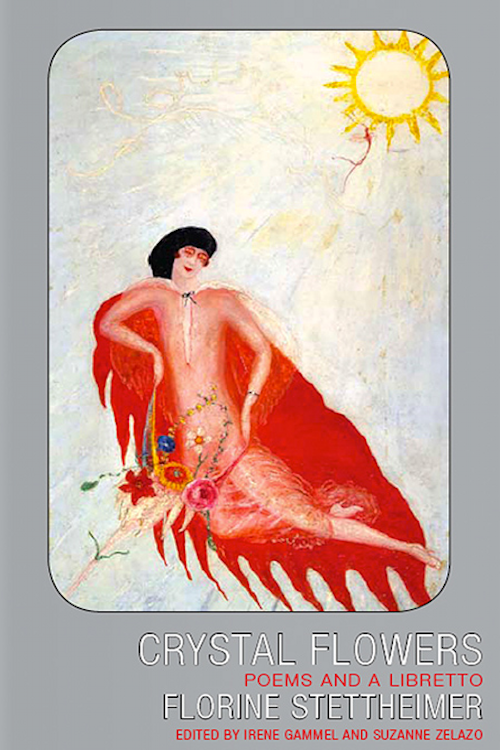 Florine Stettheimer (1871–1944) was an American modernist of German-Jewish heritage living in New York. Together with her sisters Ettie and Carrie, Stettheimer hosted a legendary salon on the Upper West Side, where she entertained the likes of Marcel Duchamp, Carl Van Vechten, Henri McBride, and Georgia O’Keeffe. In 1949, Ettie collected Florine’s poems in Crystal Flowers, a privately printed, elegant edition of 250. In addition to these rare poems, this new volume offers formerly unpublished material culled from archives, including three new poems and Stettheimer’s libretto for her ballet “Orphée of the Quat-z-arts.” Irene Gammel and Suzanne Zelazo have re-situated this overlooked poet among her modernist sisters, presenting her as an important practitioner of a modernism that integrates multiple art forms. Sixty years after it first appeared for a select few, Stettheimer’s poetry shines for a new generation of readers ready to appreciate her irreverent camp aesthetic and her exuberant painterly style. 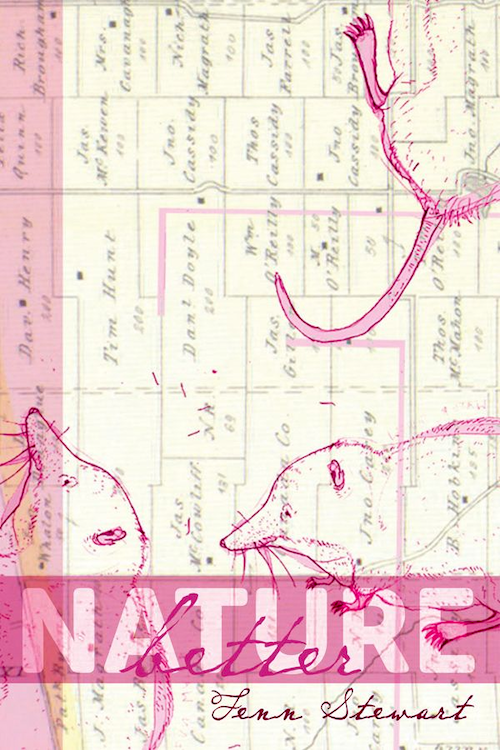 Much of the language that makes up Better Nature, Fenn Stewart’s debut poetry collection, is drawn from a diary that Walt Whitman wrote while travelling through Canada at the end of the nineteenth century. But rather than waxing poetic about the untouched Great White North, Stewart inlays found materials—early settler archives, news stories, email spam, fundraising for environmental NGOs—to present a unique view of Canada’s “pioneering” attitude towards “wilderness,” one that considers deeper issues of the settler appropriation of Indigenous lands, the notion of terra nullius, and the strategies and techniques used to produce a “better nature” (that is, one that better serves the nation).

“These vibrant, looping poems call on readers to wander through error as Stewart exposes the colonial hankerings that underpin the vocabularies of natural science, of romantic poetry, of the confession,” writes Shannon Maguire, author of fur(l) parachute and Myrmurs: An Exploded Sestina. In a review for This Magazine, Lauren Matera writes that “Better Nature stitches together its source material with precision. The result is pure poetic wit and a timely perspective on the shaping of Canada’s landscape.” The book was longlisted for the 2018 Gerald Lampert Memorial Award. 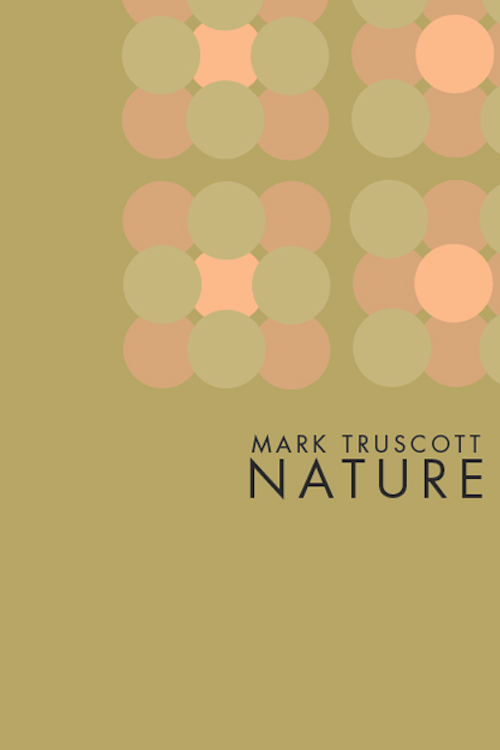 Few ideas today are as charged as nature, or as subject to contradictory inflections. Nature considers the difficulties of this overdetermined concept and asks—without recourse to nostalgia, sanctimony, or moralism—what kind of space it might meaningfully create or occupy. Travis V. Mason calls the book “full of lines sparse as recently clear-cut fields” in a review for Canadian Literature. Ron Silliman writes, “Reading these poems, thinking about them, typing them up here excites me—this book as a whole makes me excited about poetry and all its possibility. I can’t think of a better accomplishment for a volume of verse.”