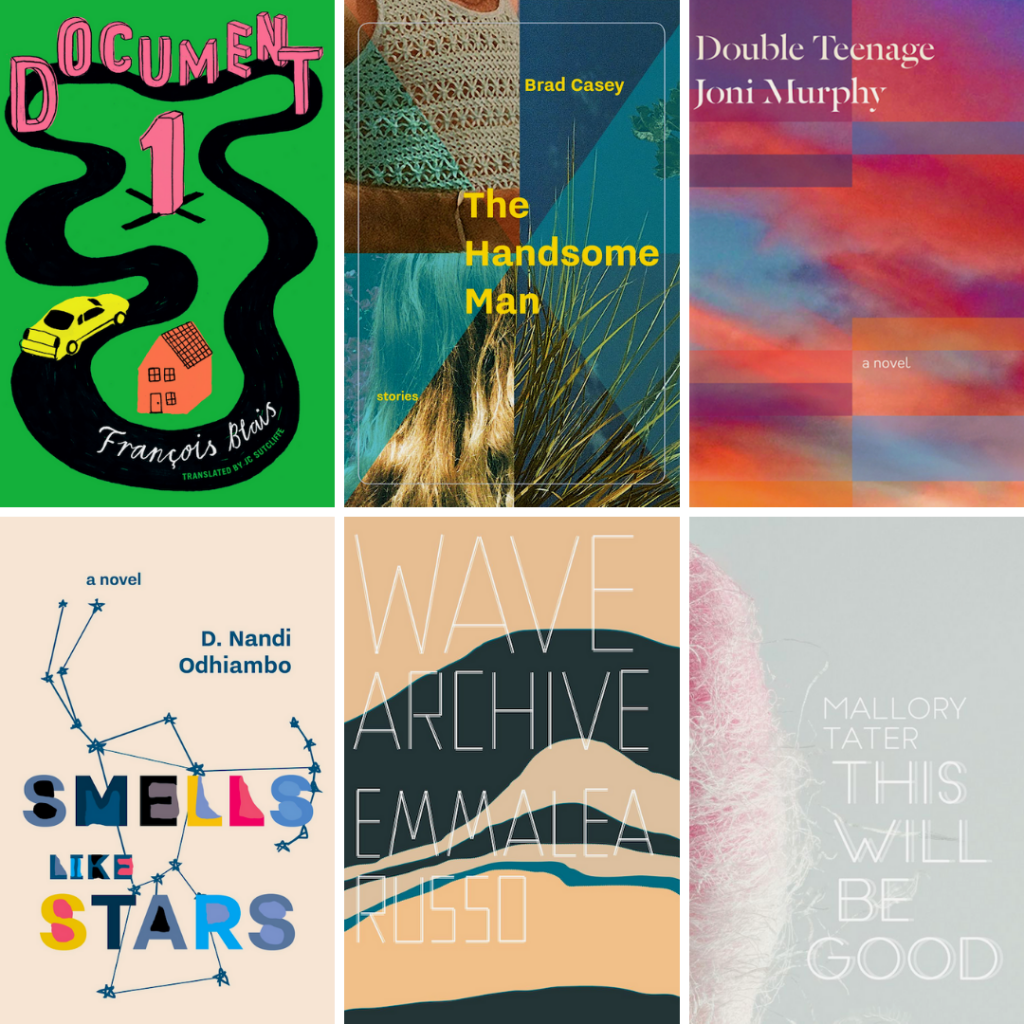 As we approach the end of a thoroughly weird summer—and, for that matter, a thoroughly weird year—we return to books as a means of processing. These titles capture the season’s unique mixture of loss, growth, and anticipation, which afflicts us every year, regardless of whether we spent most of it on Zoom. Wherever life takes you this September—work, school, a queue outside the library—transitioning into your “new normal” with a book, especially one or more of these, is a great way to end the season (and begin another one).

It’s hard to get more end-of-summer-y than a road trip book, and Blais’ novel—whose main characters, Tess and Jude, travel North America on Google Maps—is a hilarious send-up of the genre. “Document 1 is the best go nowhere travel adventure book I’ve read in a long time,” writes Brian Francis, author of Fruit and Natural Order. Last month, we shared an excerpt from the novel—which you can read here—in honour of its translator, JC Sutcliffe, and Women in Translation Month. We maintain that the book’s reference to Gilmore Girls makes it #publishinggoals.

The protagonist of The Handsome Man—Brad Casey’s first novel-in-stories—isn’t travelling but running away. The book follows him from Toronto to Montreal, New York, Ohio, New Mexico, British Columbia, Berlin, Rome, and Northern Ontario, along the way meeting hippies, healers, drinkers, movie stars, old friends, and welcoming strangers. Part character study, part travelogue, Casey’s fiction debut is in a category of its own. “The Handsome Man is about listening and writing,” writes Sofia Banzhaf, author of Pony Castle, “it’s about the dream of youth, the desire to squeeze every last shimmering drop of life out of the present moment. It’s about the vague and haunting ache that comes with loss and the people who make it bearable. From couches in Rome to frozen rivers in the Canadian countryside, the top of the Berliner Dom, and graveyards in Memphis, Casey takes you on an unforgettable journey through life’s wilderness.”

Named a Best Book of 2016 by The Globe and Mail, Joni Murphy’s debut novel follows its main characters, Celine and Julie, from girlhood to womanhood, crossing real and imagined borders. Wherever they are—whether in a dance club in El Paso or an art lecture in Vancouver—these characters brush against maddening contradiction and concealed brutality. Their growth is both psychological and physical.

“At once sober and elegiac, Murphy’s novel snakes from southern New Mexico to Chicago, from the confusions of adolescent sex to the ruins of love in adulthood,” writes Ariana Reines, award-winning author of A Sand Book. Part bildungsroman, part performance, part passionate essay, Double Teenage is a magic spell for getting out of girlhood alive.

Murphy’s new novel, Talking Animals, is forthcoming from Book*hug next week on September 15th. We look forward to celebrating its publication with you!

There’s no doubt that the tropical setting of Smells Like Stars makes the book appropriately end-of-summer-y. That said, D. Nandi Odhiambo’s novel is more than a sunny beach read. Smells Like Stars draws attention to what is hidden in plain sight, what cruelties life presents, and what struggles we face in our search for meaning. Billie Livingston, author of The Crooked Heart of Mercy and One Good Hustle (the latter longlisted for the Scotiabank Giller Prize), calls it “an unforgettable portrait of what we lose through our craving to win.” Odhiambo won the 2018 Elliot Cades Award for Literature for an Established Writer, Hawaii’s highest literary honour.

Much like ocean waves, Emmalea Russo’s genre-defying essay-poems are as dazzling as they are devastating. Russo invokes her own experiences with seizures, photographs and art-making, archival and indexical processes, brain waves, and the very personal need to document and store while simultaneously questioning the reliability of memory and language. “This archive is wild,” writes Daniel Owen, author of Restaurant Samsara. “The thinking throughout is restless, resists pat conclusions, revels in movement.” Drawing upon the history of epilepsy in both ancient and modern brain treatments, Wave Archive disrupts and restores the archive over and over again, exploring the very edges of consciousness.

This Will Be Good by Mallory Tater

This Will Be Good tells the story of a young woman’s burgeoning femininity as it brushes up against an emerging eating disorder. Its young female narrator travels, from BC to Ottawa to Washington state, roasting hot dogs with her family “until nausea” at Centennial Beach. That said, Mallory Tater’s debut poetry collection isn’t a traditional travelogue. In her book, like girlhood, summer is also a site of trauma. “The summer I start to cramp and bleed, / I miss what I know and am miserable,” Tater writes, peeling the gloss off the season. “It was mine once, what I pinched / and curved at my parent’s kitchen table, / aproned and lost in childish colour.”

Dina Del Bucchia, author of Don’t Tell Me What to Do, writes that Tater’s poetry debut “details the truths of girlhood; how young women treat themselves with cruelty and tenderness, fend off and court desire, and brace themselves for a world that both expects too much of them and yet never enough. These poems unfold as stories girls tell each other as they make space to share, cope, grieve, and hopefully, heal.”