“To choose against silence”: In Conversation with Adebe DeRango-Adem | Book*hug Press 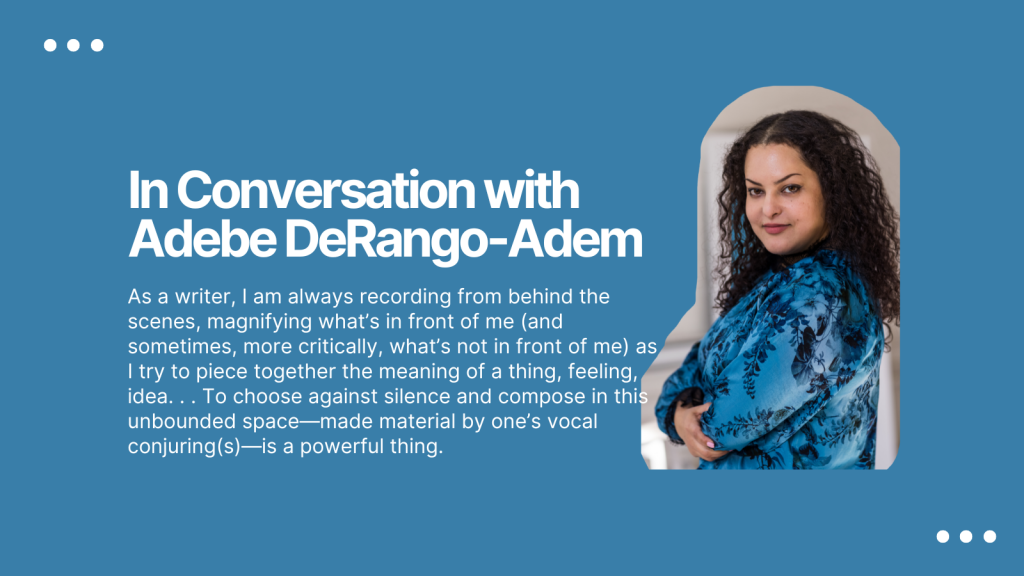 Today, we are in conversation with Adebe DeRango-Adem, author of Vox Humana, a collection of poetry driven by a sense of political urgency to probe the ethics of agency in a world that actively resists the participation of some voices over others.

In and through literary experiments with word and sound, utterance and song, Vox Humana considers the different ways a body can assert, recount, proclaim, thus underscoring the urgency of doing so against the de-voicing effects of racism and institutional violence. “This is poetry that scans like lightning across a slate-blue sky, slashing the page with its power. Through its measurements of Blackness, miscegenation, migration, identity, the body, and the body politic, Vox Humana is the voice you have been waiting to hear. An incendiary cri de coeur for our times,” write Wayde Compton, author of The Outer Harbour.

Read on for a fascinating conversation! DeRango-Adem shares insights on the metaphysics of voice, her polyphonic writing style and more.

B*H: The poems in Vox Humana have a real visual presence. They make use of space, sometimes sprawling across the page to affect rhythms. Why did you choose this non-traditional visual style? And how did you go about constructing each page?

ADA: Rhythm is everything. I’ve never been able to write a poem without thinking of what it sounds like, will sound like in space—projected, shared. In thinking about the page, I am never not thinking off the page. My use of space, of slashes rather than line breaks, all work in service to convey breaks in thought and breath; the pauses in breath—small silences in between—that make speech audible. I am interested in the page as a sonic space, the sonic space that anticipates breath, that anticipates the spoken word.

I’d argue the use of space in Vox is, in a way, traditional—it sticks to, patterns itself after the process by which air becomes breath becomes vibration, utterance, word. I am trying to reach something greater than marks on a white field. There is an alchemy that happens between respiration and phonation that Vox attempts to translate into text. Whether the attempt is successful is up to the reader; I only tried to construct the space around the words in the way the poem told me to!

B*H: Vox emphasizes voice, vibration, and sound. We find the poet “fighting for auricular coherence,” “spinning my tale to the decibels of my own joy.” Is this poetry meant to read aloud?

ADA: It’s not simply the pipe organ that serves as muse, but the process itself by which air becomes music. As I write, I can’t help but read aloud, one foot on the imaginary stage, thinking about its sonic life. It’s impossible for me to not be attuned to the music(ality) of language, as both the product of African storytelling traditions and a self-taught multi-instrumentalist (who, with the exception of training in violin, learned all by ear, by trial and error). My poetry continues to draw its influence from writers of the Black Arts tradition, who centered jazz, blues, and gospel in their works, as workable scores for imagining freedom.

Vox is invested in air, breath, resonance, echo; but also how these things converse and combine into both memory and future, the way an echo becomes a continuum—past meets present, becomes future. So yes, these are absolutely poems meant to be read aloud. Many are invested in the reverb of a voice: how far a single voice can travel, how the sound of voices ricocheting off one another remind us that we’re here. As such, a majority of the poems can be read/received in more than one way, as they contain more than one “voice,” like a choir’s overlay of voices or a fugue’s interweaving parts.

B*H: How does a poetry of voice play out in the written word?

ADA: Layli Long Soldier (from Whereas) says: “It’s the rise and fall of the voice we must capture to mean a thing in writing.” I come back to this again and again. In Vox, I am trying to hold in the form of the text the energy of orature. The voice of the poet, the voice(s) the poet hears, the voices of poetic influence, the voice of the performance itself.

I am also thinking about the metaphysics of voice, as both form of agency and measure of agency—the question of who hears you, and how do you know you’re being heard (better yet, listened to). I am thinking as well about what happens in the space of all we do not say… if there’s still a way to account for what it feels like to be silenced—individually, as part of a collective—right there, typographically, on the page. I urge the reader to think of voice as much about individual subjectivity as it is about sounding out the needs of a community—the collective amplification of issues, a way of speaking/talking back. Vox decenters the white page as anchor, as ruled (lined, but also heavy with rules) and engages with sound as presence, as material that cannot be easily translatable, or traced, or stopped.

B*H: Why did you choose Latin titles for the poems?

ADA: I can’t get enough etymology! I love to pull language apart, and want to share this joy with my readers: of not merely absorbing words but questioning every root, every process by which a term becomes an agreed-upon artifact of a language, becomes meaningful. Each title in Latin brings its own storyline, layer of interpretation, mode by which the active reader can engage simultaneously as an active listener.

The fact that some poems can be read in more than one way also contributes to the idea of the reader as active participant in the story being told. I’ve heard people say: “listening is an art.” But I think it’s more than that, that listening is a critical responsibility. Paying attention means being open—to having one’s perspective(s) change, to being changed. And hopefully through this process, become attuned to the ways in which history need not be repeated.

B*H: Politically urgent, Vox Humana explores speech as a means of countering the silencing effects of racism. Can poetry serve as a form of activism? What role does the poet play in political landscape?

ADA: The poet—like everyone—exists within a political landscape, whether they decide to play an active role or not. I choose to play an active role with the resources I have/have acquired over time. Plus, let’s face it: the truthtellers and changemakers have almost always been the artists, the activists, educators and community workers, seldom the politicians. But I also think the division or separation of art from politics is artificial, even impossible, somewhat… as well as the perceived difference between “book poetry” and spoken word.

Vox was written directly from a place of political reckoning, of a resolute need to bridge craft to climate (in all senses of the word). Publication, performance, and protest are all ways we can use our respective platforms to draw attention to the crisis(es) of our time, and must.

B*H: In “Vox Refugium,” you write “before poetry I wanted / to be a spy / perhaps they are the same / wanting to melt into / the psychology of things.” Is poetry a covert form of power?

ADA: I return again and again to Leonard Cohen’s view of poetry as a “verdict” and Ocean Vuong’s characterization of poetry as a “bridge.” A statement or positionality, but a relational one. Poetry to me is a kind of weathervane, whether written or spoken: it tells us where the wind is blowing, the direction we’re going in. It holds a kind of oracular power.

If we’re thinking in terms of the visual, the poet as scribe of life, then yes—as a writer, I am always recording from behind the scenes, magnifying what’s in front of me (and sometimes, more critically, what’s not in front of me) as I try to piece together the meaning of a thing, feeling, idea. If we’re thinking of poetry as utterance/speech, then speaking aloud could be said to create its own immediate space, and one with unfixed boundaries. To choose against silence and compose in this unbounded space—made material by one’s vocal conjuring(s)—is a powerful thing.

B*H: What do you hope readers will take away from Vox Humana?

ADA: More than anything, Vox challenges the idea that Canadian poets and their respective readers/listeners need not take their vocals beyond the local to become allies in the continual struggle for a more just and sustainable world. There’s just some noise you just can’t cancel. And it has always been noise—dissonance—we need most, in order to turn up the volume on what matters.

Adebe DeRango-Adem is a writer and former attendee of the Jack Kerouac School of Disembodied Poetics (Naropa University), where she mentored with poets Anne Waldman and Amiri Baraka. She is the author of three previous full-length poetry books to date: Ex Nihilo, a finalist for the Dylan Thomas Prize; Terra Incognita, nominated for the Pat Lowther Memorial Award; and The Unmooring. A poem from The Unmooring was featured in the 2019 Poem-In-Your-Pocket anthology, co-created by the League of Canadian Poets and the Academy of American Poets. Adebe served as the 2019-20 Barbara Smith Writer-in-Residence with Twelve Literary Arts (Cleveland, Ohio) and was selected by Sonia Sanchez as the winner of the 2021 Boston Review Annual Poetry Contest. She lives in Toronto.