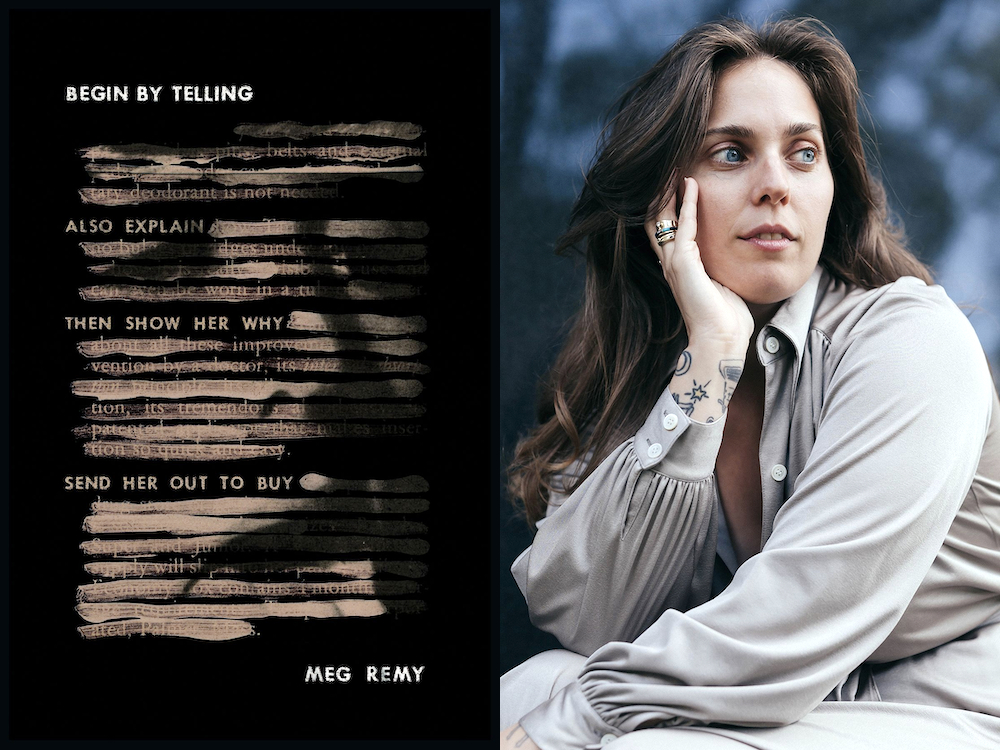 Today, we’re excited to preview the debut book by experimental pop sensation Meg Remy of U.S. Girls, Begin by Telling, a hybrid collection of illustrated lyric essays depicting visceral memories from early childhood to present day. Remy paints a stark portrait of a spectacle-driven country: we catch glimpses of Desert Storm, the Oklahoma City Bombing, random street violence, the petrochemical industry, small town Deadheads, a toilet with uterus lining in it, the county STD clinic, and missionaries at the front door. These threads nimbly interweave with probing quotes and statistics, demonstrating the importance of personal storytelling, radical empathy, and the necessity of reflecting on society and one’s self within that construct.

“Begin by Telling ripped through me with the velocity and weight of a freight train,” writes Tegan Quin, member of the acclaimed duo Tegan and Sara and co-author of High School. Michelle Tea, author of Against Memoir: Complaints, Confessions and Criticisms, writes that “Begin by Telling explores the horrors and absurdity of being a ‘girl’ in the mediated warscape of America. With sharp emotional intelligence, Remy reveals a cultural systemic rot that begins with family and fractals out into school, life, the media, the government, and history. Both hallucinogenic and lucid, this work is a radical interrogation of trauma, and a literary salve for the feminist psyche.”

Begin by Telling has appeared on multiple “can’t-wait-to-read” lists, including CBC Books’ and the Toronto Star’s, so we think it’s fair to say: the world is as excited as we are. Begin by Telling will be released in Canada on March 16 and in the US on April 21.

We hope you enjoy the following sneak peek from Begin by Telling. Pre-orders are available now from our webstore. Be sure to stay tuned for more exclusive sneak peeks of our forthcoming titles. 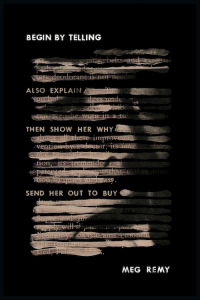 Vacation in Myrtle Beach, South Carolina, with the same family we always take these kinds of trips with, because the children line up in age and we get along. The daughter-in-my-age-slot and me play mini-golf, feet away from our family suites. My turn to putt again. I decide to wind up like a pro and really whack the ball. It flies over or through a row of hedges into what we know on the other side is The Main Drag. No big thing. We have retrieved balls, kicked balls, racked balls, caught balls, dodged balls, served balls, teed up balls, inflated balls our whole life. We are old enough to do this.

We cross to the other side of the hedge and I spot the one that got away. (I believe I look both ways.) I start out across the multilane blacktop but don’t get far. Something flashes out of the corner of left eye. Body puts hands up just in time for the loudest sound I’ve ever felt. I’m fly—ing through the air, suddenly silent and magical. Now I’m skid-d-d-ing, exposed flesh kissing and rubbing asphalt as sound returns. People I don’t know gather above me. I’m-a-nurse takes off her shirt to reveal a sports bra. Don’t move an inch…hit by a van. Someone is screaming. It’s just my friend, she’s fine, always trying to make it about her. The sun is beating down on the scene. Cold sweat mixing with my blood, now peppered with little street rocks. I can feel when Mom is notified. I can hear her fear-footsteps landing one after the other, getting closer to what her new reality could be. When the paramedics arrive, I accept this fate. I am put on a stiff board with a neck brace and I am taken to a hospital in my bathing suit.

Mom and I take a cab back from the hospital to the hotel. I get out sore, shoeless, and road-rashed, but really actually fine, physically. People on a balcony somewhere are applauding the miracle. I know that if people are applauding me, Dad will be calling. I don’t feel like explaining. I want to disappear into something larger than anything having to do with me. I will never hear the end of this. They’ll all say I got hit chasing a ball like a dog. Your story in the wrong hands can be such a cruel poker.

Meg Remy is a multi-disciplinary artist, and performer. Originally from Illinois, she is established as one of the most acclaimed songwriters and performers to emerge from Toronto’s eclectic underground music scene where she currently lives. Primarily known as the creative force behind the musical entity U.S. Girls, her celebrated discography spans early experimental works released on the Siltbreeze label, and includes three Polaris Prize shortlisted albums released by 4AD: Half Free (2015), In a Poem Unlimited (2018), and Heavy Light (2020). Both Half Free and In a Poem Unlimited also garnered Juno nominations for best Alternative album. Meg has toured extensively through Europe and North America, establishing a reputation for politically astute commentary and theatrical performances with her extended U.S. Girls band, named the best live act of 2018 by Paste magazine. During this time Remy has maintained a visual arts practice, exhibiting collage work and directing several music videos and other video art works including her short film Woman’s Advocate (2014), in which she also performed. Begin by Telling is her first book.