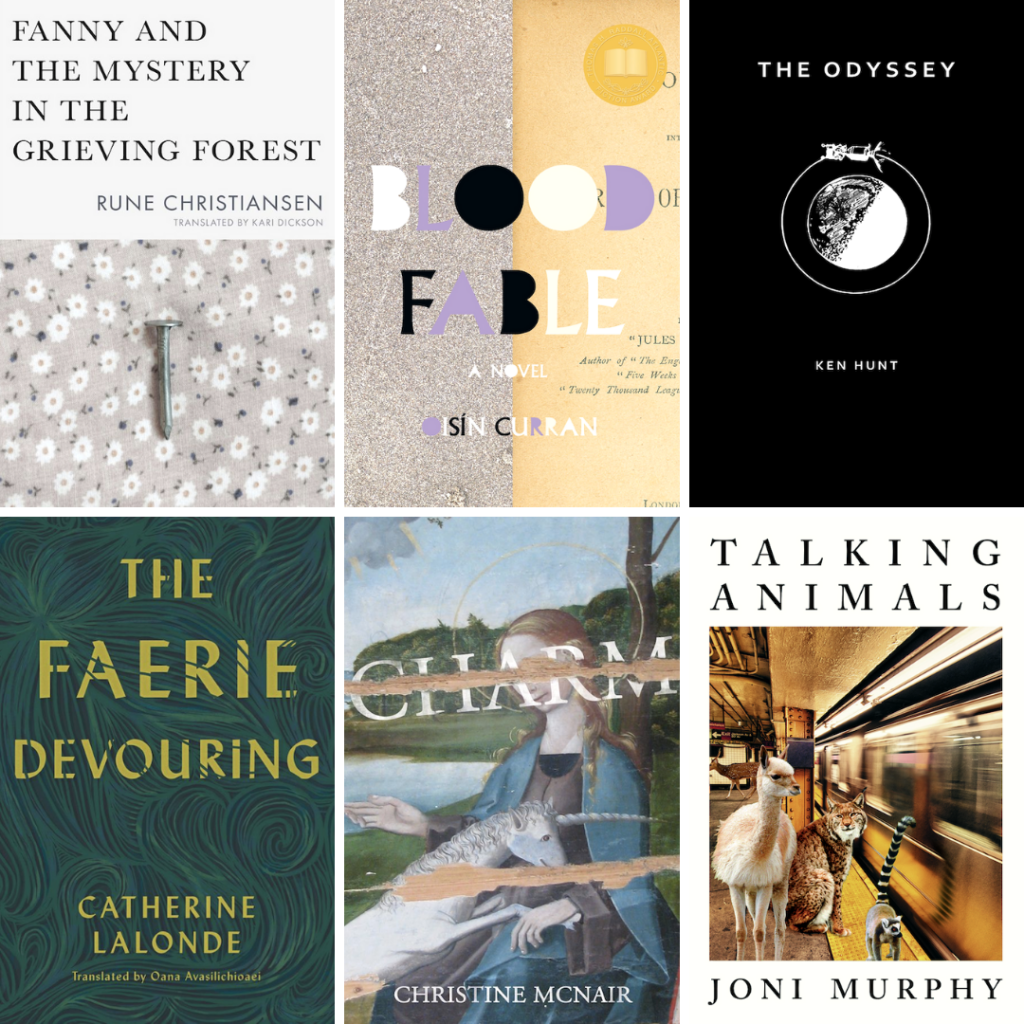 In a world full of stories, there are some that stick to us like burrs, told and retold with trace edits for centuries. It might have been years since your grandmother warned you to stay on the path—if you’re not Little Red Riding Hood, it’s possible that she never warned you—but the images and morals of fables and fairy tales are still worth exploring (and, in many cases, subverting). The following books are fables and fairy tales for this century. They speak to the past and the present, but more than that, they help us to navigate our increasingly complex lives with a little more wisdom.

Fanny and the Mystery in the Grieving Forest by Rune Christiansen, Translated by Kari Dickson

Masterfully translated from the Norwegian by Kari Dickson, Rune Christiansen’s Fanny and the Mystery in the Grieving Forest is a beautiful, poetic portrait of grief, friendship, independence, and transgression. Christiansen’s novel follows Fanny, a 17-year-old high school senior who has lost both her parents in a car accident. Granted permission to live independently in the family home located on the outskirts of a small Norwegian town, she passes the days performing her unchanging routine: going to school, maintaining the house, chopping and stacking wood, and keeping the weeds at bay. As Fanny grieves and attempts to come to terms with the sad circumstances of her life, a fairy tale-like world full of new possibilities begins to emerge around her.

In Oisín Curran’s Blood Fable, set in 1980s Maine, a utopian community is on the verge of collapse. The charismatic leader’s authority teeters as his followers come to realize they’ve been exploited for too long. When the eleven-year-old son of one adherent learns that his mother has cancer, the boy begins to speak of another time and place. His parents believe he is remembering his own life before birth. This memory, a story within the story of Blood Fable, is an epic tale about the search for a lost city refracted through the lens of the adventures the boy loves to read. But strangely, as the world around them falls apart, he and his parents find that his story seems to foretell the events unfolding in their present lives.

Curran’s fantastical novel won the 2018 Thomas Raddall Atlantic Fiction Award, and was one of The Globe and Mail’s most-anticipated books of fall 2017. Jacob Wren, author of Rich and Poor and Polyamorous Love Song, writes that “the dark magic in Blood Fable is just a story (within a story), but that somehow makes it more, and more truly, magical. It is a story about how stories are made, how they help and refuse to reflect our lives, as resonating versions of the world refracted through the prism of imagination.”

The Odyssey by Ken Hunt

Ken Hunt utilizes NASA’s Apollo 11 voice transcription document, a chronicle of the first six days of that mission, to create The Odyssey, an erasure poem of star charts carved from the technical jargon and offhand remarks found in that transmission. The resulting text is both a progressive investigation and a commemorative homage to a major historic event; it compares the astronauts of the 20th and 21st centuries to seafarers of ancient Greek literature, mythic figures who devoted their lives to endeavours of discovery and understanding.

“Like the first footprints of a sailor disembarking on an undiscovered island, Ken Hunt’s The Odyssey transforms the landscape,” writes renowned author derek beaulieu. “Each word is a blip, a wow, a tiny galley afloat on the Sea of Tranquility. Loaded with the loot found by sifting and sorting through the speeches of Luna’s suitors, The Odyssey is an epic in miniature, a hymn in the dark. Others will follow, and surely find their way home.”

The Faerie Devouring by Catherine Lalonde, Translated by Oana Avasilichioaei

A modern-day fable and feminist bildungsroman, The Faerie Devouring tells the story of the sprite, her absent mother (who dies in childbirth), and a brood of fatherless boys all raised by Gramma, a stalwart matriarch and wicked faerie godmother. From her rural childhood with its crudeness and toil to an urban rebellion with its glittering pleasures, the sprite struggles with and ultimately overcomes the burden of genealogy. This feral incantation comes alive through disenchantment, desire, phantasmagoria, defiant imagination, and unruly language, which the Montreal Review of Books calls “organic, pulsing, and repetitive in the way of fairy tales.” The Faerie Devouring (originally published in French as La dévoration des fees) won the 2018 Prix Alain-Grandbois de l’Académie des lettres du Quebec, and was a finalist for both the 2018 Governor General’s Literary Award for Poetry (French-language) and the 2018 Grand Prix du Livre de Montreal. Oana Avasilichioaei also won the 2019 Cole Foundation Prize for Translation.

Christine McNair’s second poetry collection, Charm, considers the craftwork of conception from a variety of viewpoints—from pregnancy and motherhood, to how an orchid is pollinated, to overcoming abusive relationships, to the manual artistry of carving a violin bow or marbling endpapers. McNair’s poetic line evolves as if moving in a spellbound kaleidoscope, etched with omens, fairytales, intimacy’s stickiness, and the mothering body. Sandra Ridley, author of Silvija and The Counting House, calls the book “unyielding,” as well as “stunning and alchemical.” In a review for the Winnipeg Free Press, Jonathan Ball—author of The Lightning of Possible Storms—writes that McNair “uses a fragmentary, fractured line and crashing repetitions to suggest conception as a craft of its own sort of traumatic work.” Charm won the 2018 Archibald Lampman Award.

A fable for our times, Joni Murphy’s Talking Animals takes place in an all-animal world where creatures rather like us are forced to deal with an all-too-familiar landscape of soul-crushing jobs, polluted oceans, and a creeping sense of doom. The novel—Murphy’s second after Double Teenage—is an urgent allegory about friendship, art, and the elemental struggle to change one’s life under the low ceiling of capitalism. Elan Mastai, author of All Our Wrongs Today, calls the book “a thrillingly imaginative zoological fantasia vivid with fierce intelligence, caustic observation, and sly humor,” and Kirkus calls it “a 21st-century combination of Animal Farm and Aesop’s Fables.” Talking Animals was released on September 15th, 2020, to international acclaim.