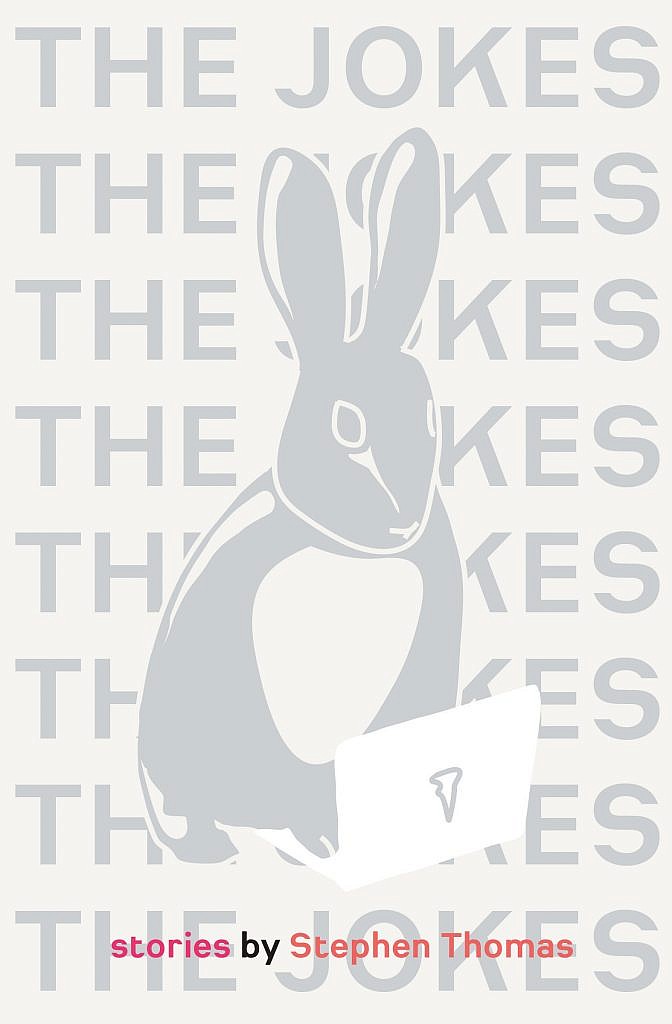 Our Short Story Month Celebration continues with Stephen Thomas, author of The Jokes.

Like a series of moments in a social media-like “feed,” this collection of very short stories riffs on the form of “the joke,” but as this might be understood by the best culture-critical comedians of our time: Andy Kaufman, Stephen Wright, Jon Stewart, Richard Pryor. Much like those stand-up artists who sanctified the joke-form, these stories deal with intense subjects, yet with a kind of SSRI-like placidity that allows readers to cling to each word as the narratives unfold.

Sad and funny, hopeful and ecstatic, nostalgic and cerebral, the vignettes in The Jokes offer a very personal, yet amazingly relatable entry-point into some of the big ideas that trouble our times—gender identity, sexuality, life and death, and ways of being in the world.

In a review for The Globe and Mail, Pasha Malla writes, “The Jokes invokes those seemingly banal experiences that unexpectedly suggest realms beyond our understanding.” Lily Hoang, author of Changing, adds, “Thomas writes little stories, but be wary of little things: they punch and expand and bruise and heal and break and reveal. They are revelatory.”

Thomas reads “Presidential graves,” from The Jokes, in the following video:

Ramón’s father takes the whole family on a trip in the 1978 Mustang, and, in the uncomfortably-cramped back seat, Ramón diagrams sentences from As i lay dying.

Ramón rests his book on his lap and looks out the window. The mountainous country of Virginia slides along its track into Ramón’s past. Suddenly Ramón wishes very deeply that he had done something, like the famous criminal, to which he could confess to his family, because it is only when you fail someone utterly and miserably, he once heard his aunt say, that you are finally free.

He can not imagine how free he will one day be.

(Save 25% off all short story collections from Book*hug, including The Jokes, until May 31. Remember to follow along all month as we celebrate short stories by sharing excerpts and readings on the Book*hug Blog. Follow us as well on Facebook, Twitter, and Instagram.)

Stephen Thomas is a Toronto-based writer of fiction, nonfiction, plays, and Facebook statuses. His work has appeared in numerous publications, including Hazlitt, The Atlantic’s CityLab blog, Little Brother, The Seneca Review, The Fanzine, and The Puritan. He has been awarded a Truman Capote Scholarship and an Edward F. Albee Fellowship. The Jokes was shortlisted for the Metatron Prize for Rising Authors of Contemporary Literature. In 2019, with Jade Blair, he completed a web series about polyamory, Miss Misery.