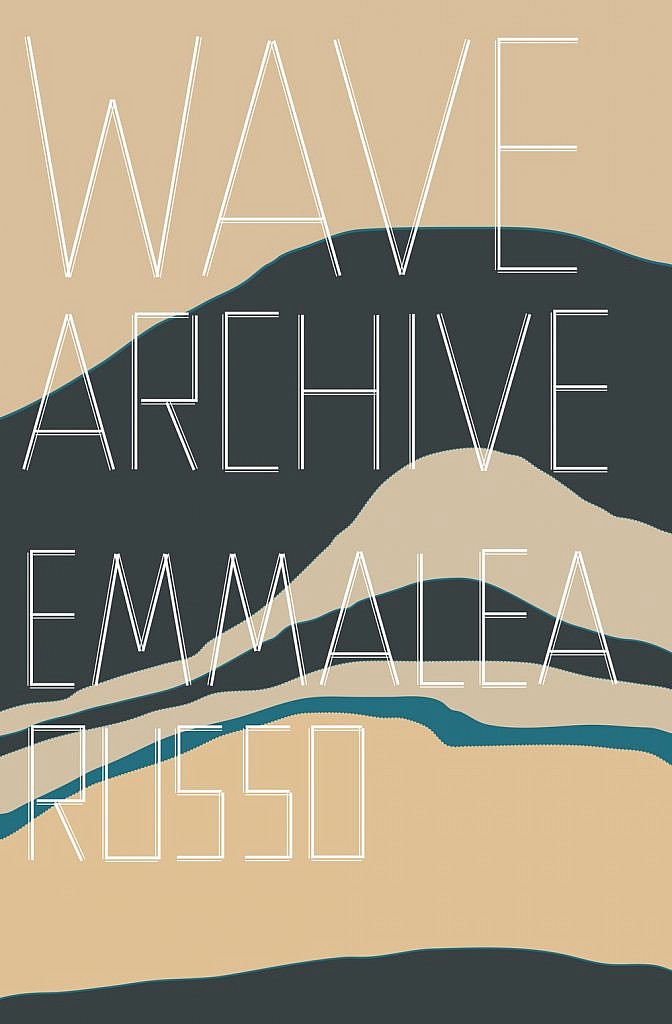 Happy National Poetry Month! To celebrate our poets and all things #NPM20, we’ll be sharing a poem each day on our blog.

To kick things off, we’re pleased to bring you the poem ‘In the Compartment’ from Wave Archive by Emmalea Russo.

In Wave Archive, Russo invokes her own experiences with seizures, photographs and art-making, archival and indexical processes, brain waves, and the very personal need to document and store while simultaneously questioning the reliability of memory and language.

And now, onto today’s poem. Click on the video to watch Emmalea read the poem and follow along with the text below.

You are in a house attempting domesticity warding off hysteria and irresistible impulses. For instance, you’ve never been more aware of the weight of the brain on the neck.

You respect logic but can only take it so far before emotion seeps in, the wind at the start of the event. You would like to number your feelings and place them in miniature folders. Fold them and find an adequate compartment. An archive for the changes of the waves of the brain. The filing cabinet could live at the edge of the Atlantic Ocean and move in and out with the tide.

No, it would stand firm amidst the changing tides. It would be waterproof and benefit from saltwater. The color would change from deep green to lighter green. What was once clustered and dispersed would get compiled.

You would return daily to the object by the ocean and you alone would have the ability to use the information. The feelings inside interacting with each other in the dark.

Of course, the contents of the compartment shift.

What time is it?

You weren’t removed from your body but weren’t exactly in there, either.

The house is still intact. Brainwaves weigh nothing.

A text message received: What’s up?

You gutted the house. The house with the view of the compartment. You had a strong feeling about it. Ownership, the word love. A showy house, an edge taken.

You think you can see the deep green filing cabinet from the attic window.

The man said, “because what is consciousness but a wave of the hand?”

Avoid storms of any sort. Do not walk outside when it’s windy. Move to a place where the temperature is consistent but still look at photographs of the seasons. Travel infrequently and prepare weeks ahead of time if the need arises. Follow the centuries old rule of living a temperate life.

The archive is wild.

The compartment should hold real answers. The emotional archive is your only boat.

Now that you’re in the ocean, looking at the compartment from the other side, you’re confused.

According to the man, logic is or had been more reliable than intuition.

According to you, logic had never been more reliable than intuition.

Your body moves back and forth between the house and the ocean. You place thoughts in the compartment as you pass.

Near the dreary February ocean, you are choosing to live austerely.

Accruing emotional documents requires labor. The man said, “some women are logical and you are not one of them.”

You’ve never felt so clued in, so able to access the wave brain. You can inhabit the archive whenever you want.

The tumultuous she. The brainwaves looking sharp on the tundra.

Especially you who. Were sought after, arranging the archive, going to just store it away or find a method for display. A whale moves in the night ocean.

The horizon is an imaginary line. The archive is vertical. The horizon is unchanging. The tides are changing. As in temperament. The body becomes more muscular, then softer. Forms and unforms. Steps between wave and archive. Words drip into water.

The house and the horizon with the compartment and the ocean in between.

Patient: ruled more by emotion than by reason.

Decision: respected but not recommended.

It’s always nice to talk to you. I like when you come in. Please do get sleep. After you wake up, it will be gone. You have a three percent chance of dying from your condition in the next ten years. At the rate you’re going.

At the rate you’re going. The brain is trainable.

Emmalea Russo is the author of G (Futurepoem) and Wave Archive (Book*hug). She was a writer in residence at the Lower Manhattan Cultural Council and the 18th Street Arts Center (LA), and a visiting artist at the Art Academy of Cincinnati and Parsons School of Design. Recent writing has appeared in Artcritical, BOMB, The Brooklyn Rail, Cosmopolitan, Hyperallergic, and the Los Angeles Review of Books. Russo is a practicing astrologer and divides her time between Avon-by-the-Sea, NJ, and New York City.