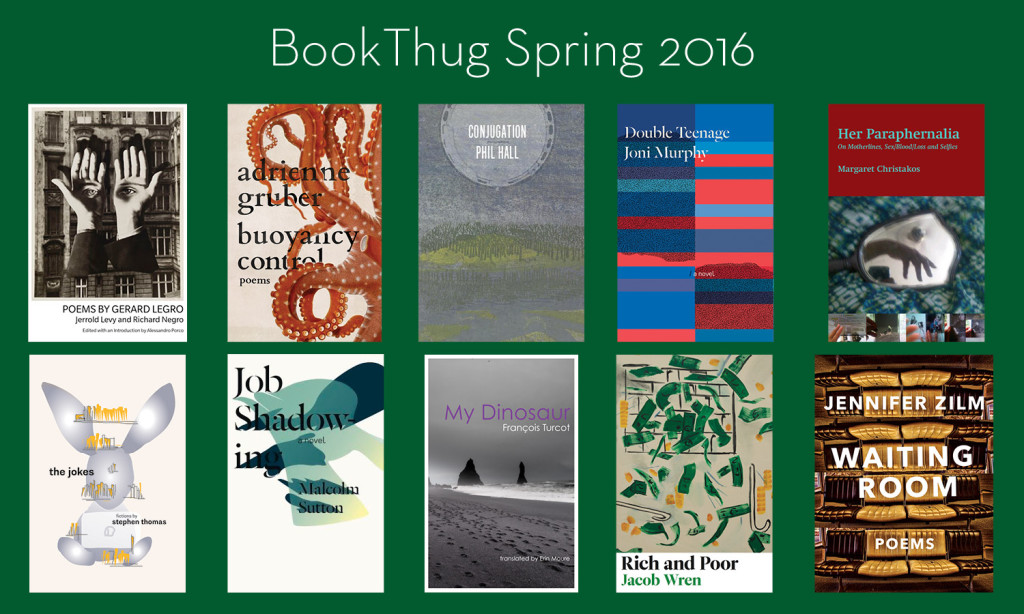 All of us at BookThug HQ are excited to share our superb Spring 2016 season with you. Between February and May, 10 new books will be coming your way, featuring novels, collections of poetry, and even a creative non fiction memoir, from new writers as well as several authors that are already familiar to our readers. We think you’ll agree that each of these diverse titles are a unique contribution to the BookThug catalogue.

Following on the success of Polyamorous Love Song,  Jacob Wren returns with his latest novel, Rich and Poor (available April 13), the story of a middle-class, immigrant pianist who has fallen on hard times, and now finds himself washing dishes to make ends meet.

Asking the question, “Who hasn’t, at one time or another, considered killing a billionaire?”, Wren capably balances personal reflections with real-time political events. Rich and Poor cuts into the psychology of politics in unexpected, and unnerving ways as his protagonist awakens to the possibility of a solution to his troubles and begins to formulate a plan of attack, in which the only answer is to get rid of “the 1%.”

Job Shadowing (available April 26), the debut novel from Malcolm Sutton, and BookThug’s own Fiction Editor, might well be the perfect companion piece to Jacob Wren’s Rich and Poor.  The intriguing and topical themes of Job Shadowing deliver an imaginative take on the present-day crisis in work, particularly as it relates to identity and belonging, that will appeal to readers  who relate to the speculative world of un(der)employment living. Tamara Faith Berger, author of Maidenhead, writes, “A smooth art thriller in the tradition of Bolaño, Job Shadowing meddles with corporate culture, dying domesticity and the living, breathing life of the alienated worker.”

Read an exclusive excerpt from Job Shadowing in Eleven Eleven.

The very short stories in Stephen Thomas’ flash fiction debut, The Jokes (available March 15), moments in a social media–like ‘feed.’ They riff on the form of ‘the joke,’ but as this might be understood by the best culture-critical comedians of our time: Andy Kaufman, Stephen Wright, Norm McDonald, Jon Stewart, Richard Pryor. Sad and funny, nostalgic and cerebral, the vignettes in The Jokes offer a very personal, yet amazingly relatable entry-point into some of the big ideas that trouble our times-religion, sexuality, life and death, and ways of being in the world-all while coloured by touches of weird otherworldliness that living in someone else’s social media feed can bring.

Double Teenage (available March 24), by Joni Murphy, is the story of two young girls, Julie and Celine, who are coming of age in the 1990s in a little desert town along the US–Mexico border. Through their love of theatre, they find their way into a wider world that’s rich with opportunity, but at the same time, dense with situations of peril and violence. In a recent article she wrote for The Millions, I Love Dick author Chris Kraus wrote “Double Teenage seems like the definitive book of The Young Girl as defined by Tiqqun. It’s also a definitive book about NAFTA, the Ciudad Juarez femicides, spectacular serial killings, and media’s comforting lull.”

In poetry, we are very excited to publish Conjugation (available March 2), the fourth book of poetry BookThug has published by Phil Hall, who also happens to be our Senior Poetry Editor. It is also his 18th work overall. Conjugation explores the possibilities of each letter within a word, with language that travels in and out of itself. In this work, Hall returns to the nature imagery he explored in his earlier poems, while also offering a poem that is an ode to the dissatisfaction many Canadians feel towards their country’s progression. Full of word play and poems that flow and compel, Conjugation is a masterful book of poetry.

Buoyancy Control (available April 5), is the sophomore collection of poetry from Vancouver writer Adrienne Gruber. Awash in metaphors of oceans, lakes, and other bodies of water, while exploring themes of sexuality and sexual identity, and queerness, while confronting the feelings of loss and longing found in relationships, and the chance glimpse into a new life, while still recovering from a painfully failed connection. Rachel Rose, Vancouver’s Poet Laureate, and author of Thirteen Ways of Looking at CanLit, writes, “Gruber’s erotic reach encompasses the world entire, from undersea creatures to the human body of the beloved. No Hallmark sweetness in this collection-here is a fierce, wet, pulsing hunger, though there is an acute sensitivity in these observations, whether of childbirth, cold-water swimming, or other moments of convulsion and transformation so powerful that they transcend intellect. ”

You are invited to take a seat in (the) Waiting Room (available April 5), the first full length book of poetry by award- winning Vancouver writer Jennifer Zilm. Zilm  uses various styles and forms of poetry, such as texts, unsent e-mails, footnotes and sonnets, to exploring the curious boundaries of various therapeutic terrains. Waiting Room is an investigation into what it means to wait, to be a patient and to be patient, to be a student and to be a teacher, to be a healer and to be healed. Wayde Compton writes, “Jennifer Zilm’s Waiting Room is incantatory and incandescent… These are the poems of our times and you will rise into the aether within them.”

My Dinosaur by François Turcot, translated from the French by Erín Moure, (available April 12), is the latest addition to our literature in translation series and the first collection of poems from one of Quebec’s most celebrated literary voices to be published in English.  My Dinosaur, Turcot’s elegy to his father, is composed of poems both tensed and open, minimalist and talkative, serious and droll, alternating the voice and writings of the father with the fictions and assemblies of the son. In many way, My Dinosaur is a tribute to all our Dads.

Poems by Gerard Legro by Jerrold Levy and Richard Negro, edited with an introduction by Alessandro Porco (available January 26), is a unique and timely addition to the canon of Black Mountain College. The poems were written in 1949 by Jerrold Levy and Richard Negro, two disaffected, post-war American teenage pranksters, who were desperate to fight back against aesthetic and moral codes of maturity, propriety, and sophistication. The poems were composed, circulated, and performed on the campus of Black Mountain College, an experimental school located just outside Asheville, North Carolina. Now, BookThug is bringing this previously unpublished work to light for the first time in Poems by Gerard Legro, edited and with an introduction  by noted Canadian poet and scholar Alessandro Porco.

Her Paraphernalia: On Motherlines, Blood/Sex/Loss & Selfies (available May 3), by noted Canadian poet Margaret Christakos, is an intimate and original collection of midlife writings that seeks to make readers think in a very personalized way about family geneology, private sexuality and life changes, including those experiences that exist at the intersections of contemporary digital culture. Written as a love song to her mother and daughter,  Her Paraphernalia explores themes that many people of all ages and stages can relate to-self-identity, the beauty of the selfie, partnership, divorce, miscarriage, menstruation, sexual lust, solo travel, depression, menopause, the death of a parent, the writing life, and women’s transgenerational vitality, among others.

All Spring 2016 titles are now available for pre-order.
Learn more about them by downloading our seasonal catalogue here.