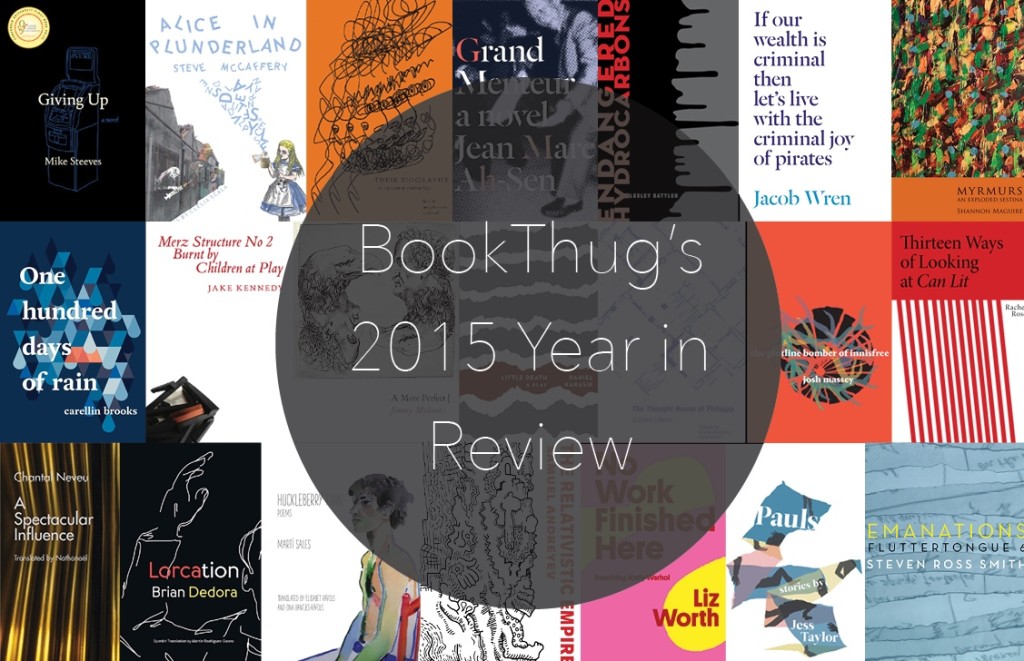 Here at BookThug HQ, we can’t believe it’s already December 30! Today, we’re looking back at our year in review and sneaking a peek at what lies ahead in 2016. While 2015 will soon be over, it won’t soon be forgotten, for what a year it has been.

In January 2015 we launched our brand new website! We refreshed our branding and made the site mobile friendly. All the thanks goes to John Schmidt, our web media marketing specialist. We even got a fresh new logo, designed by Fiction Editor Malcolm Sutton.

In January, we celebrated the first anniversary of HIJ House Reading Series. HIJ started twenty years ago as a journal published by BookThug founder Jay MillAr and Managing Editor Hazel Millar. The journal was published every two weeks and ran for five consecutive issues. Each one was hand sewn and featured covers with original art made from homemade rubber stamps. Enough copies were made for the contributors and for Hazel and Jay to keep one extra for their archives.

HIJ was reborn in January 2014 as a monthly house reading series at BookThug HQ, with each event featuring two (or sometimes more) readers, the launch of a tiny new chapbook of previously unpublished work by each of the featured readers, and lots of homemade pie. Some people ask us, why pie? We say, why not? Each featured reader is asked to share their author pie request (or in some cases, a cake, especially if they’ve recently won the Giller Prize), which Hazel will bake for them.  HIJ continued to flourish in 2015 and this year’s readers included Andre Alexis, Miriam Toews, Kate Cayley, Dani Couture, Lex Von Konigslow, Shane Book, Grace O’Connell, Jacob Wren, Brecken Hancock, Paul Vermeersch, Kathryn Kuitenbrouwer, Helen Guri, Baziju, Phil Hall, Elisabeth de Mariaffi, George Murray, Jeramy Dodds, and Karen Solie. HIJ was also recently profiled in a featured article in the Toronto Star.

Join us on Sunday January 24th for our Season 3 opener:  HIJ #17 with Catherine Bush, Rachel Rose and Damian Rogers. Keep up to date about all upcoming readings here, or like us on Facebook , or follow us on Twitter.

On April 26, the Ottawa International Writers Festival hosted a BookThug Launch featuring 5 of our spring authors: Carellin Brooks (author of One Hundred Days of Rain); Mike Steeves (author of Giving Up); Pearl Pirie (author of the pet radish, shrunken); Jake Kennedy (author of Merz Structure No. 2 Burnt by Children at Play); and kevin mcpherson eckhoff (author of their biography: an organism of relationships.) The event was hosted by fellow BookThug author, Sandra Ridley, author of The Counting House. Our thanks to directors Sean Wilson and Kira Harris, and the entire team at the Ottawa International Writers Festival, for hosting us!

In September, we officially launched the BookThug App. If you haven’t yet joined our club and gotten the app, it’s available now for free download for IOS and Android. Our app is like the BookThug insider’s clubhouse, giving you exclusive access to behind the scenes glimpses into the world. Some of our regular features include Tess’ Book Club (featuring our mascot Tess of da BookThugs and her favourite books), News and Events, a weekly round up of all that’s new, Author Spotlight, Throw Back Thursday (in which we highlight select backlist titles), as well as book recommendations, quotes of the week, interviews and excerpts, poems, book lists, and previews of our forthcoming titles. If you subscribe to Quill and Quire’s Omni newsletter, you can read this article about the launch of our app.

This year also saw the launch of the BookThug poemBot. Our addictive new poemBot allows you to collaborate with BookThug authors to create your own unique poem. To play, all you need to do is type in your line of original text in the space provided, choose your poem type and length and click “create poem.” Then watch as poemBot crafts a poem using your text along with text taken from published BookThug authors.  Have fun!

This year, we were very honoured that the International Festival of Authors (IFOA) hosted A Celebration of BookThug. Hosted by Emily M. Keeler, Books Editor at the National Post, the round table event featured readings and discussions with BookThug authors Kate Hargreaves (author of Leak), Mike Steeves (author of Giving Up), Jess Taylor (author of Pauls) and Liz Worth (author of No Work Finished Here: Rewriting Andy Warhol.) The insightful questions from Emily and answers from the authors made it a night like no other.

Aisha Sasha John’s second collection, THOU, was a finalist for the 2015 Trillium Book Award for Poetry.  Giving Up, the debut novel by Montreal author Mike Steeves, was shortlisted for the Quebec Writers’ Federation 2015 Concordia University First Book Award.  Veteran poet Nelson Ball was shortlisted for the first time in his long career this year when his chapbook, A Gathering, was a finalist for the 2015 bpNichol Chapbook Award. Congrats to all!

Spring 2015 Season Highlights: Giving Up, Mike Steeves‘ debut novel, was a finalist for the Quebec Writers’ Federation 2015 Concordia University First Book Award and was selected as a Best Book of 2015 by the National Post. One Hundred Days of Rain  by Vancouver writer Carellin Brooks was described by Publishers Weekly as a “a memorably profound and stylish portrait of love’s complications.” If our wealth is criminal then let’s live with the criminal joy of pirates by Jacob Wren was published in a special limited edition, in partnership with Toronto’s Type Books, for  the inaugural Authors for Indies Day on May 2nd. The book, which features two stories and an essay, made Librairie Drawn and Quarterly’s Staff Picks of 2015 list.  One of the most fun projects of the year for us was publishing Alice In Plunderland by Steve McCaffery, which coincided with the 150th anniversary of Lewis Carroll’s beloved classic Alice in Wonderland. The book is beautifully illustrated by collage artist Clelia Scala, and was profiled in a special post on All Lit Up, called Beautiful Books: Journey to Plunderland. We also had a lot of fun working with the multi-talented author and playwright Daniel Karasick to publish his play, Little Death, in record time to accompany its world premiere  at Toronto’s Theatre Centre in April. A More Perfect [, the poetic debut from Jimmy McInnes, which is a rhetoric translation of Barack Obama’s 2008 campaign speech “A More Perfect Union”, received a rave review in the National Post by David B. Hobbs, who wrote,  “A More Perfect [ will change you, or at least the way you hear politics.” We also celebrated National Poetry Month in April with 4 new books of poetry: the pet radish, shrunken, the 3rd full collection from Ottawa poet Pearl Pirie, Endangered Hydrocarbons, the debut collection from Calgary’s Lesley Battler, and two new works from the Clown Princes of CanPo, the BC Interior Chapter: kevin mcpherson eckhoff (Their Biography: an organism of relationships) and Jake Kennedy (Merz Structure No. 2 Burnt By Children at Play).

Fall 2015 Season Highlights: #PaulsMania swept the fall season with Jess Taylor‘s debut Pauls, a collection of stories all about characters named Paul. It made an appearance on many Best of 2015 lists, including being chosen as an Amazon.ca Editors’ Best Books of 2015, a Best Book of 2015 by the National Post, and was a pick for Quill and Quire’s Best Cover Design in 2015. It was also listed as a Best Canadian Book of 2015 by Kobo.  Two-time Scotiabank Giller Prize finalist and Canada Reads winner Heather O’Neill even chose it as her favourite book of the year for CBC Books. Grand Menteur by Jean Marc Ah-Sen was selected as one of The Globe and Mail’s Top 100 Books of 2015, calling it “Unsentimental but passionate, a singular book.” No Work Finished Here: Rewriting Andy Warhol by Liz Worth was chosen by CBC Books as one of the most anticipated  books of the fall season and she talked with them about how she wrote the book in a special feature here.  Anakana Schofield, Scotiabank Giller Prize finalist and author of Martin John, also chose it as one of her favourite books of the year for CBC Books.  In a review of The Plotline of Bomber of Innisfree in the Vancouver Sun, critic Brett Josef Grubisic wrote that author Josh Massey “might be a visionary godsend.” As a follow up to her 2013 debut fur(l) parachute, poet Shannon Maguire returned with the 2nd book in her medievalist trilogy, Myrmurs: An Exploded Sestina. In his review, rob mclennan wrote, “In Myrmurs, Maguire’s is a language poetry composed with a lyric lilt and tone, one constructed with precise measure and a musical ear.” The fall season also included new poetry from veteran sound poet Steven Ross Smith, who returned to verse form with Emanations, the 6th installment in his ongoing fluttertongue series, Lorcation by Brian Dedora, which is sure to fascinate lovers of Lorca’s writing, and Samuel Andreyev’s sophomore collection, The Relativistic Empire, which combines the brevity and lightness of a comic strip with the complexity and richness of French symbolist poetry.

BookThug’s commitment to publishing high quality books in translation continued this year with 3 new titles: The Thought House of Philippa by Suzanne Leblanc, translated by Oana Avasilichioaei and Ingrid Pam Dick, A Spectacular Influence by Chantal Neveu, translated by Nathanaël, and Huckleberry Finn by Martí Sales, translated from Catalan by Elisabet Ràfols and Ona Bantjes-Ràfols. The book was published to coincide with the International Festival of Authors’ special thematic focus on the literature of Catalonia.

We’re grateful for a wonderful 2015, and eagerly await all that lies ahead for us in 2016. Here’s an exclusive sneak peek at some things we’re really excited about in the year ahead.

Happy New Year to all the BookThugs everywhere!