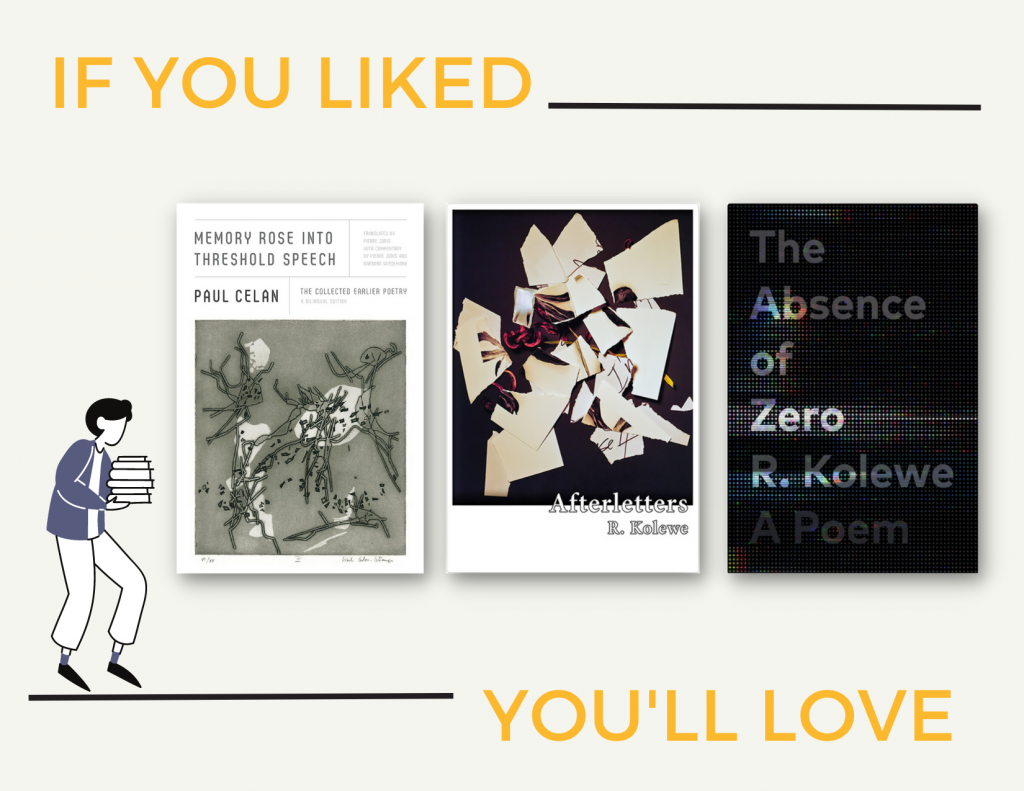 The final instalment of Literary Matchmakers for 2021 features two poets whose elliptical works stretch language to the outer limits of perception and expression. If you are entranced by the life and letters of Paul Celan, please meet R. Kolewe’s The Absence of Zero and Afterletters.

Both Celan and Kolewe are preoccupied with memory and its historicity, each poet engaging with the formal possibilities of memory as delimited by historical circumstance. Celan, a holocaust survivor writes towards Jewish experience during and after the second world war. His poems conjure a time which stutters and words which seek new arrangements for repeating the unrepeatable—marking remembrances both intensified and distorted by the passing of time in a post-Shoah world.

Kolewe too seeks 20th century memory. The Absence of Zero plays with our understanding of time, as it evolved with Einstein’s theories of special and general relativity—those which disproved notions of absolute time in favour of spacetime. The Absence of Zero, comprised of 256 16-line quartets (along with 34 free-form interruptions) is derived from a mathematical object, the Riemann curvature tensor—which has 256 components. “The curvature of spacetime,” says Kolewe “influences the rate at which time passes, and is described by the Riemann curvature tensor.” The book is an expression of time as we currently understand it, and an inquiry into how memory fits into its model.

While both poets work within broad 20th century forms, they are equally interested in the particularity of memory’s momentary lapses. Memory is heavy yet inconsistent, piercing yet hazy. They use repetition to evoke (and re-evoke) the past along shifting contexts, bringing to each poetic moment the presence of an absence which both exceeds representation and achieves its own formal existence in its instant of iteration. As Kolewe writes, “despite these limitations one can still predict / today being today again.”

True—memory isn’t linear or coherent or even comprised of words, and so it is that in reading these poets we are not pinned to any particular poem but, rather, to ongoing rhythms of expression. Pierre Joris, one of Celan’s translators has spoken of Celan’s intent “to weave the threads of the individual poems into a text that is the cycle or book of poems. The poet gives us the threads: we have to do the weaving—an invitation to a new kind of reading.”

In this spirit, The Absence of Zero is a testament to sitzfleisch: a book best consumed in long, engrossed periods; constructed for the reader who will pick up on its unhurried rhythms. It requests an attentiveness that is at odds with the pace of “clock time” but in tune with a spacier reality, a more atmospheric conception of memory—that persistent creeping, haunting, life-inducing pendulum of arrival and departure.

Celan is a touchstone for Kolewe, a poet to which he often returns. His 2014 debut collection, Afterletters, traces Celan’s relationship with the poet Ingeborg Bachmann, weaving together fragments of their letters to one another, in order to explore the traces of loss and love, in language that breaks and recombines.

No doubt, Kolewe’s poetry will satisfy any reader in search of homage to Celan, or craving continued engagement with Celan’s greatest themes, no less than the texture of time and memory itself.

Read more about R. Kolewe’s The Absence of Zero here and more on Afterletters here. 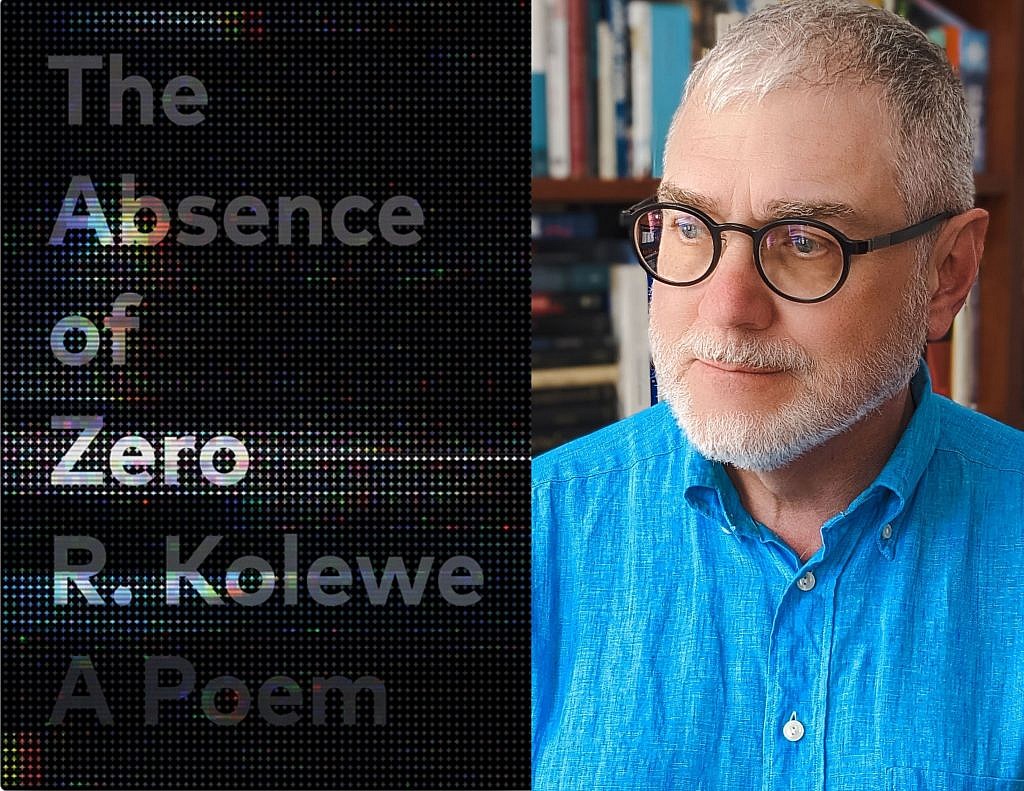 That’s all for now dear reader. The Absence of Zero and Afterletters are both available to purchase from our online shop or from your local independent bookstore today!
PS) A reminder that you can save 25% off all in-stock titles until December 24, 2021, as part of our annual Holiday Sale.

R. Kolewe was born in Montreal and lives in Toronto. Educated in physics and engineering at the University of Toronto, he pursued a successful career in the software industry for many years. He now lives in Toronto and writes full time. His work has appeared online at ditch, e-ratio, The Puritan, and (parenthetical), as well as in the Literary Review of Canada and PRISM International. He is the author of two previous poetry collections, including Afterletters (Book*hug Press, 2014) and Inspecting Nostalgia (2017).