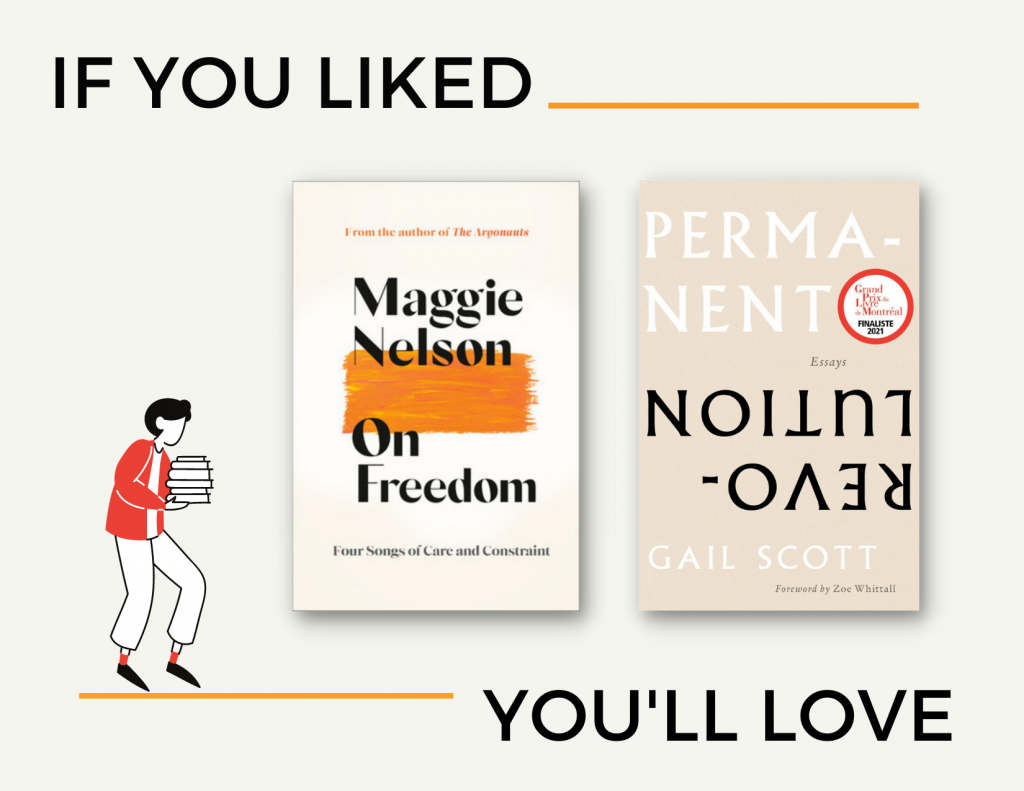 This next instalment of Literary Matchmakers features two genre-defying/defining authors who traverse and blur categories of autobiography, theory, pop culture, feminism, queerness, art criticism and beyond. If you haven’t already guessed it: Maggie Nelson and Gail Scott!

If you liked Maggie Nelson’s On Freedom, you will love Gail Scott’s Permanent Revolution, a collection of new essays gathered alongside a recreation of her groundbreaking text, Spaces Like Stairs. Both books operate on the same basic premise: that social progress (revolution) is an ongoing (permanent) practice, an unending experiment. Each writes from deep within her epoch—a receptive viewer and a critical participant with a knack for finding what remains unresolved.

The interest these writers take in the present moment is marked by a fierce engagement with the material aspects of language. Both writers understand that the ways we think, write, and speak are knotted in structures of power and domination. “To recognize that gender minorities are—as are other diverse minorities—in a permanent state of emergency as concerns life + the expression of it,” writes Scott, “is necessarily to reshape how we narrate as a species.”

While Nelson takes up the present discourse on “freedom” (seeking something generative out of the notoriously fraught term), Scott takes up discourse as a whole, with an aim to break language apart and reconstruct it anew. Permanent Revolution is an exemplary artifact that simultaneously expresses and manifests Scott’s wishes for the reformation of language as it relates to the creation of new possible futures.

Heady sentences combining theory and anecdote raise the stakes of any given moment. Paragraphs bump up against one another like lines in a poem, triggering unique, even outlandish, associations and new ways of seeing/being. The essence of Franco-Canadian life seeps into Scott’s English, reminding us of a multiplicity of knowing—caesura of the dominant cultural logic. In the end, Permanent Revolution arouses (and demands) our deepest attentiveness, making it a unique perceptual experience and—we dare say—a must read. 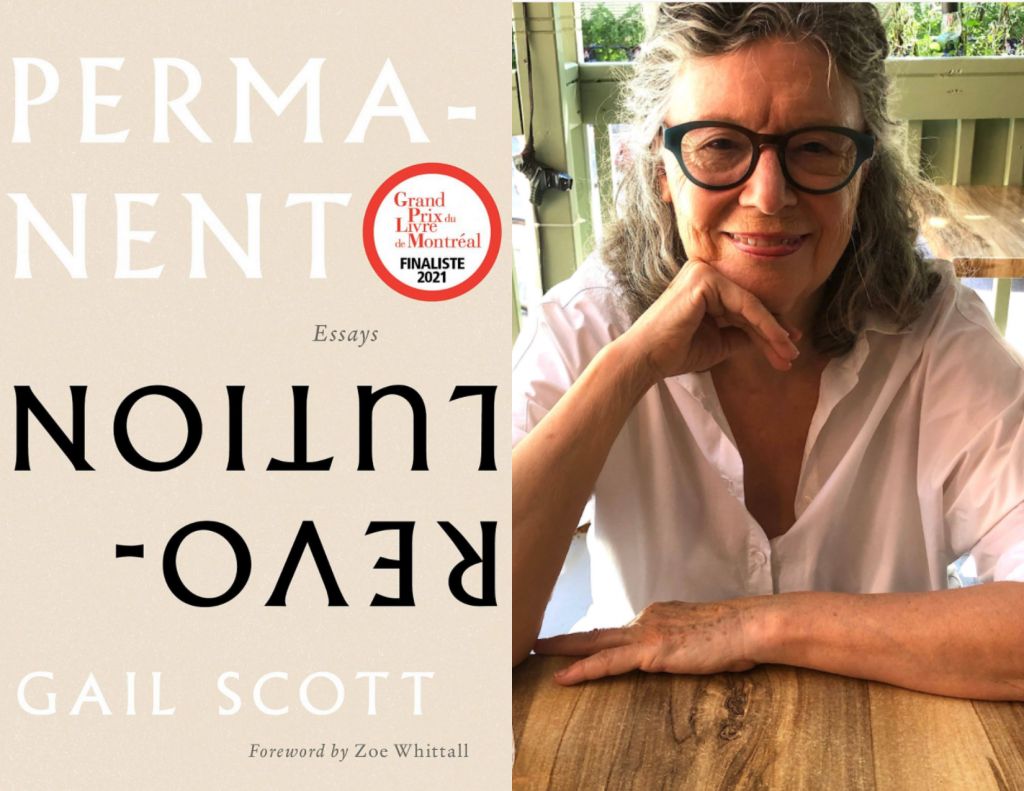 That’s all for now dear reader. Permanent Revolution is available to purchase from our online shop or from your local independent bookstore today!
PS) A reminder that you can save 25% off Permanent Revolution (and all in-stock titles) until December 24, 2021, as part of our annual Holiday Sale.

Gail Scott is the author of Spare Parts (1981), Heroine (1987; finalist for the Paragraphe Hugh MacLennan Prize for Fiction; re-issued in 2019 with an introduction by Eileen Myles), Main Brides (1993; finalist for the Paragraphe Hugh MacLennan Prize for Fiction), My Paris (1999), Spare Parts Plus Two (2002), and The Obituary (2010; shortlisted for Le Grand Prix du livre de Montreal). Her essays are collected in Spaces Like Stairs (1989) and in La Théorie, un dimanche (1988) which was translated into English as Theory, A Sunday (2013). Scott is co-editor of the New Narrative anthology: Biting the Error: Writers Explore Narrative (2004; shortlisted for the Lambda Literary Award for Nonfiction Anthologies). Her translation of Michael Delisle’s Le désarroi du matelot was shortlisted for a 2001 Governor General’s Literary Award. A memoir, based in Lower Manhattan during the early Obama years, is forthcoming. Scott lives in Montréal.
Gail Scott, Literary Matchmakers, Permanent Revolution
Share this post
Facebook Twitter Pinterest