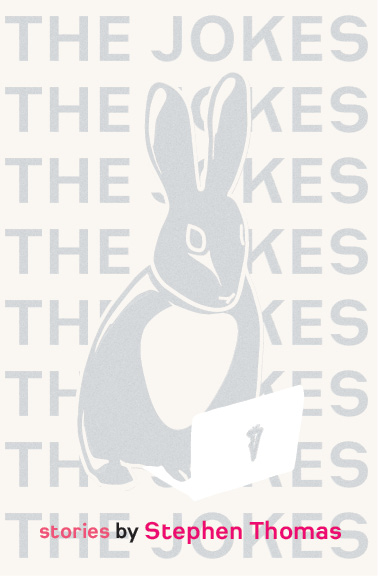 Stephen Thomas’s debut book, The Jokes, is a collection of flash fiction stories full of surprises, humour and sincerity. Compared to Lydia Davis’s writing, The Jokes was shortlisted for the Metatron Prize for Rising Authors of Contemporary Literature. In a review for The Globe and Mail, Pasha Malla wrote, “The Jokes invokes those seemingly banal experiences that unexpectedly suggest realms beyond our understanding.”

Like a series of moments in a social media–like ‘feed,’ this collection of very short stories riffs on the form of ‘the joke,’ but as this might be understood by the best culture-critical comedians of our time: Andy Kaufman, Stephen Wright, Jon Stewart, Richard Pryor. Much like those stand-up artists who sanctified the joke-form, these stories deal with intense subjects, yet with a kind of SSRI-like placidity that allows readers to cling to each word as the narratives unfold.

Sad and funny, hopeful and ecstatic, nostalgic and cerebral, the vignettes in The Jokes offer a very personal, yet amazingly relatable entry-point into some of the big ideas that trouble our times—gender identity, sexuality, life and death, and ways of being in the world.

Kelly Duval: What’s one thing you want to tell readers about your book?

KD: How does your latest book compare with what you initially thought it would be when you started writing?

ST: It turned from an essentially formalist experiment—playing with the form of ‘the joke’—into a series of pieces that became pretty emotional and meaningful and ‘real’. I now see that the formalist project allowed me a way into aspects of my life and feelings I wouldn’t have been able to access otherwise, kind of like how people talk about using hallucinogens for therapy. You’re in this other world and you can access things you previously couldn’t, or wouldn’t allow yourself to. The book in this sense became more autobiographical than I expected it to, though in feeling more than content, if that makes sense.

KD: What inspired you to write this book?

ST: This book was written while I was living in Alabama, going to school there. It’s now been two years since I left, and with that perspective I can see that I was really, to an absurd degree, stuck, emotionally. There’s a Freudian word for this I think. Like emotionally constipated. I was kind of cut off from my closest people, and the writing projects I thought of as my ‘main’ projects, the longer stories and the novel I was trying to write, weren’t working, and I was frustrated and depressed (which is reflected in the book perhaps most literally by the “shiny metal bunny” character who appears on the cover, who, all they can do is watch Netflix and hate themselves and write like one okay sentence), and I kind of stumbled onto this form of these quick, mercurial, emotional, but conversational little ‘updates’, and they made me happy.

KD: How did you decide on your book’s title and what might an alternate title be?

ST: I ultimately decided on the least possible link-bait-y/SEO-friendly title because it was the most appropriate. A more interesting title was It Is Always An Emergency, which was originally going to be the title of a chapbook of some of the jokes released by a press in San Francisco. The phrase is from one of the stories and I think evokes the ambient tension that kind of haunts a lot of corners of the book. Ultimately though I thought it cast too large a shadow over the reader’s interpretation of the book. I like the extreme neutrality of “The Jokes.”

KD: What song is definitely on your writing playlist?

ST: Nina Simone has been writing music for me for as long as I have written and is the only musician I keep coming back to to try to find my ‘writing’ feeling. No, that’s not true. Two songs I have been coming back to for a while now are a cello version of Bach’s “Chaconne” I have on my computer and this mashup by Carlos Serrano of Kanye and Sam Smith called “Tell Me I’m The Only One.” Bach is to tap into a feeling of centeredness, and that Kanye/Smith song is to release tension.

Order your copy of The Jokes here.

Stephen Thomas is a Toronto-based writer of fiction, nonfiction, plays, and Facebook statuses. His work has appeared in numerous publications, including Hazlitt, Playboy, The Atlantic’s CityLab blog, Little Brother, The Seneca Review, The Fanzine, and The Puritan. He has been awarded a Truman Capote Scholarship and an Edward F. Albee Fellowship. The Jokes was shortlisted for the Metatron Prize for Rising Authors of Contemporary Literature. Learn more at www.stephenthomaswriter.com.