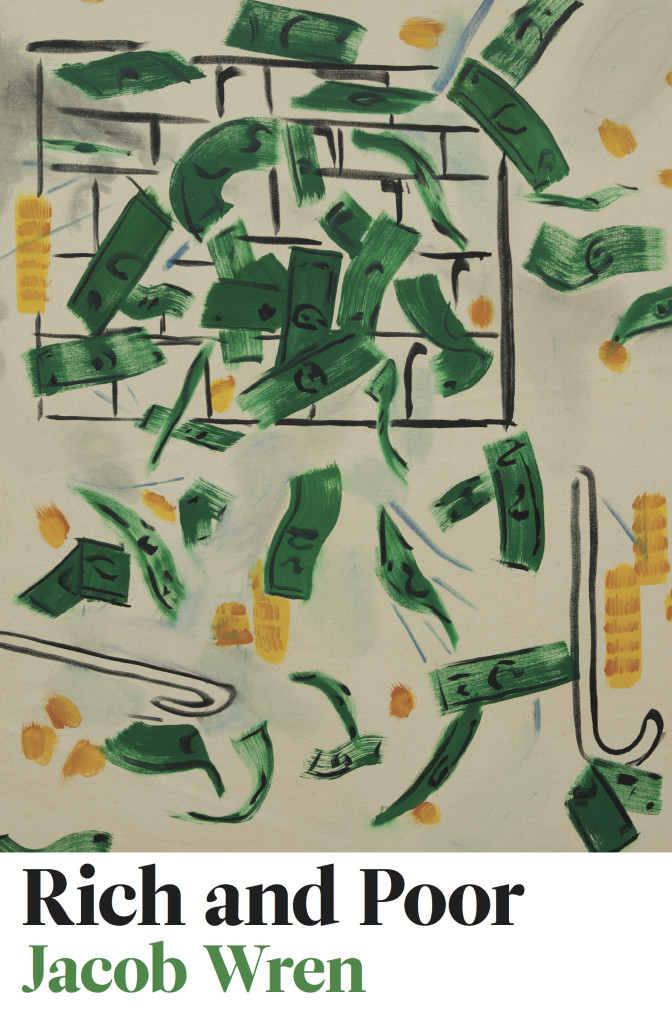 Who hasn’t, at one time or another, considered killing a billionaire?

Rich and Poor is a novel of a man who washes dishes for a living and decides to kill a billionaire as a political act. It is literature as political theory and theory as pure literary pleasure—a spiralling, fast-paced parable of joyous, overly self-aware, mischievous class warfare.

As his plan proceeds and becomes more feasible, the story cuts back and forth between his and the billionaire’s perspectives, gradually revealing how easily the poisons of ambition, wealth and revolutionary violence can become entangled. A fable of not knowing how to change the world and perhaps learning how to do so in the process.

BookThug Intern Kelly Duval sat down with Jacob Wren to discuss his latest book. Keep reading for a brief excerpt from his novel that follows the interview.

Kelly Duval: What one word embodies Rich and Poor for you and why?

Jacob Wren: A few words come to mind: money, dignity, searching. I’ve often wondered what it might be like to live in a world without money. How completely everything might or might not change. When I talk about a world without money people often tell me it’s something so completely impossible it might not even be worth broaching the topic. But money hasn’t always existed and I see no reason to be certain that it will always exist in the future. Without money I suspect many of the most extreme abuses of capitalism would be considerably more difficult to perpetrate. And yet money is so abstract, especially the billions that exist as little more than numbers on a computer screen. As Agamben has said: “God didn’t die, he was transformed into money.” But, I sometimes think: old gods are continuously being replaced with new ones. Rich and Poor isn’t a novel about a world without money, but when I follow its logic it might slowly begin to lead me in that direction.

KD: How did you decide on the title Rich and Poor and what might an alternate title be?

JW: I’ve often received praise for my titles (Families Are Formed Through Copulation, Polyamorous Love Song, etc.) and perhaps I was starting to feel a certain strange kind of pressure. A pressure to top myself, to come up with a more spectacular title each and every time. And when I feel public pressure to do something I often react by doing the exact opposite. Instead of another flashy, attention seeking title, I wondered what it might be like for me to try out a more simple, classic title, like War and Peace, Crime and Punishment, Fathers and Sons (though I wasn’t particularly thinking of Russian literature.) In the past I had almost no readership, so perhaps back then I felt my books required an attention-catching title to pull in at least one or two readers. But now that things have improved ever-so-slightly, I was curious what it might be like to embrace my love of artistic simplicity.

An alternate title might be: Revenge Fantasies of the Politically Dispossessed. Unfortunately, that’s already the title of a novel I published in 2010. As a writer there is an anxiety: am I simply writing the same book over and over again. But I’m always pushing against this fear, trying to surprise myself, to catch myself off balance, off guard. If everyone expects a flashy title, what if I turn the other way? But surprising myself by doing something more conventional or normal also unnerves me. In fact, I don’t think I’ll do it again.

I think I like titles that are a little bit misleading, that tell you something, yet don’t tell exactly what the book is or what it’s like. I like there to be a certain misunderstanding between the title and the book, a certain tension or contradiction. Rich and Poor has two characters: one who started poor and ended up rich, and one who almost, but not quite, took the opposite route. The title suggests this dynamic, yet gives only the slightest hint of what the book actually is.

KD: What song is definitely on your writing playlist?

JW: There are so many songs I’m listening to all the time. Mainly these days I’m listening to Hip Hop and African Funk, Soul and Disco. In fact, as I get older, my musical tastes tilt more and more towards disco. But there is one song that contains lyrics that really encompass so many of my concerns in both life and art, a song that’s been running through my thoughts for almost as long as I can remember: I Was A Maoist Intellectual by Momus. The first few stanzas:

I always knew that I could seize the world’s imagination

And show the possibilities for rapid transformation
I saw a nation in decay, but also a solution: Permanent cultural revolution
Whenever I played my protest songs the press applauded me
Rolled out the red carpet, parted the Red Sea
But the petit bourgeois philistines stayed away
They preferred their artists to have nothing to say

How did I pass my time on earth? Now it can be revealed:
I was a Maoist intellectual in the entertainment field

I showed the people how they lived, told them it was bad
Showed them the insanity inside the bureaucrat
And the archetypes and stereotypes that were my stock in trade
Toppled all the ivory towers that privilege had made
Though I tried to change your mind I never tried your patience
All I tried to do was to point out your exploitation
But the powers that be took this to be a personal insult
And refused to help me build my personality cult

How did I pass my time an earth, what on earth got into me?
I was a Maoist intellectual in the music industry

I left the normal world behind and started living in
A hinterland between dissolution and self discipline
I burned the midnight oil to build my way of seeing
A miner at the coal face of meaning
The rich despised the songs I wrote which told the poor their worth
Told the shy to speak and told the meek to take the earth
But my downfall came from being three things the working classes hated:
Agitated, organised and over-educated

KD: What’s the next title on your reading list right now?

JW: I have three books next to my bed that I’m planning to spend the summer reading. They’re all books I can’t quite believe I haven’t already read:

The Many-Headed Hydra: Sailors, Slaves, Commoners, and the Hidden History of the Revolutionary Atlantic by Peter Linebaugh and Marcus Rediker

In The Break: The Aesthetics Of The Black Radical Tradition by Fred Moten

Cruising Utopia: The Then and There of Queer Futurity by José Esteban Muñoz

Excerpt from Rich and Poor

There is of course a reason, an incident, behind my desire to kill him. I was not born poor. I became poor. Not as a direct result of his actions, but more indirectly, through grief. I experienced a grief so severe I could not work, think or exist. This period lasted for about ten years and I remember very little of it. But there is one thing I remember with absolute clarity. During the years of oblivion I stopped reading literature and stopped reading philosophy. I would occasionally read the newspaper but never managed to get very far. The news all seemed too far away. What I did start reading was corporate shareholder reports. By the end of ten years, just before I was evicted, my apartment was packed with them. I would go to business chat sites and post notices asking stockholders to send me their old ones, that I was collecting them, and literally hundreds started arriving in the mail. Clearly the stockholders had no idea what to do with them, were happy to see them go, forests and forests of the stuff. I would read them obsessively, against the text, as if every proudly announced profit concealed an environmental crime or worse. As if they were not documents of enrichment but of destruction. There was a great deal of truth to my analysis, but this activity was unfortunately not good for my mental health. It was a way to drive myself insane with anger and it worked. I spent god knows how many years driving myself mad in precisely this manner and might still be doing so today if I had not been forced to leave the apartment. Sometimes the things that harm us most are also our saviours.

With the eviction at the forefront of my mind, I started piling up the reports in the alleyway behind my building. It took me an entire week to move them all; I couldn’t believe how many I had collected or how big the eventual pile was, like a mountain of pure greed. The night before they kicked me out, I set fire to the mountain and watched it burn for five hours. I expected fire trucks and police but none came. I expected the whole city to burn but the flames kept to themselves, much like the neighbours who I suppose decided to mind their own business and not call the police. As I watched, I imagined it was the corporations themselves that were burning: their headquarters, the CEOs, the private security companies hired to protect them. I imagined that for every forest that was clear-cut, one corporate headquarters building burst into flame as if by magic. For every mother forced to watch her infant starve to death on the poverty wages her husband brought in, one CEO would spontaneously combust. I remember that fire. For five hours I fantasized until the last embers turned black at the brink of dawn. That night was the first step of my long journey back to sanity, towards a more coherent worldview, and also the first kernel, the very beginning, of my eventual plan.

Order your copy of Rich and Poor here.

acob Wren makes literature, performances and exhibitions. His books include:Unrehearsed Beauty, Families Are Formed Through Copulation, Revenge Fantasies of the Politically Dispossessed and Polyamorous Love Song (a finalist for the 2013 Fence Modern Prize in Prose and one of the Globe and Mail’s 100 best books of 2014). As co-artistic director of Montréal-based interdisciplinary group PME-ART he has co-created the performances: En français comme en anglais, it’s easy to criticize, Individualism Was A Mistake, The DJ Who Gave Too Much Information and Every Song I’ve Ever Written. He travels internationally with alarming frequency and frequently writes about contemporary art. Connect with him on his blog (www.radicalcut.blogspot.com) or on Twitter@everySongIveEve.