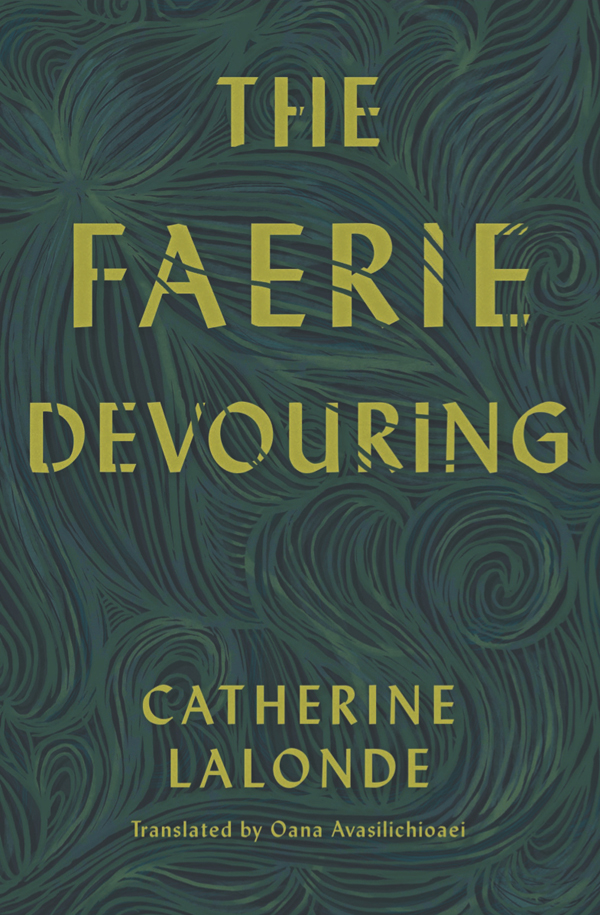 In this week’s edition of Feature Friday, we are excited to bring you an excerpt from the newly released The Faerie Devouring, a modern-day fable and feminist bildungsroman by Quebecois author Catherine Lalonde and reimagined by the award-winning poet and translator Oana Avasilichioaei. The Faerie Devouring tells the story of the sprite, her absent mother (who dies in childbirth), and a brood of fatherless boys all raised by Gramma, a stalwart matriarch and wicked faerie godmother. From her rural childhood with its crudeness and toil to an urban rebellion with its glittering pleasures, the sprite struggles with and ultimately overcomes the burden of genealogy.

49th Shelf recently listing The Faerie Devouring as one of their most anticipated books for Fall 2018. Erin Moure adds,”Maybe it’s our way of yammering the words that Kafka’s penal officer has etched on his own back: Be Just. Except unlike Kafka, Catherine Lalonde doesn’t make us die, she makes us live as sprites and sisters and grammas and dead moms, and in her turned tables, the penal colony is the human family in its stink and whine and scream and will to life.”

We hope you enjoy this excerpt from The Faerie Devouring. Happy reading!

From The Faerie Devouring:

She said it from the get-go, when in the beginning was

the word, when the very first words existed, the first she

hearkened to in her life. Cruel precious revelations, gospel

snake oil liniment and the whole kit and caboodle, and in

She said it. The grandmother said it. After the clamour

of flesh, after the bloody harvest of the mound—liver,

torn out than pushed, uprooted by the neighbour’s skilled

and sweaty expertise in the clammy chamber. She said it

while the mother lay dying of too much blood and loss;

and of spilling, becoming liquid agony. The grandmother

said it so that they knew it in advance, before the morbid

bloodless face, before the melting morphology that lone

around the rosie, the first will be the only one to see the

the first will be the last.

There came silence. When the spent mother’s face turned

inside out like a glove, her human countenance howled

outside herself, reduced for a split second to strident

screams and lips, acrobatic decibels, then lips and silence

wayside, charms of a bracelet useless in this carnage, the

string of the face broken right off and its pearls swallowed

in silence. The spent mother’s face, turned inside out,

from below the fresh face emerged in sublime agony,

shat out, brand new. A fresh bronchiole in the infinite

genealogy of matryoshka dolls that suck their faces, like

serpents, by eating their own tails.

She said it. After the scream that sounded the passage

to being, as the death knell tolled, as the ridiculous

squealing heralded life beginning, she said it; just after

the air dance, in the chill of boiling oil that makes

howling flesh actually alive, struck down by the horrible

when the wailing fell silent, she said it.

The words came in response to the soothed screams

when in the water gently warmed on the back burner

they placed the refuse—the born thing uprooted rather

than delivered, this rump not yet slapped and hatched

too soon, this forced living thing, dragged outside the

freshwater cage, with unlimited lungs (air going in, from

outside inside, a sensation of rusted revolving doors and

outside the breaths, races, forced and anxious foolish

laughs of the four others plus one (who only half counted)

pierced the walls for an instant, while they began hearing

beating, beating wholeheartedly, continually, as it gets

used so used to being.

Order your copy of The Faerie Devouring here.

Catherine Lalonde lives in Montreal. Her publications include Cassandre (2005), and Corps étranger (2008, winner of the Émile-Nelligan Award) and La dévoration des fées(2017), finalist for the 2018 Governor General’s Literary Awards. She works as a journalist for the Montreal daily Le Devoir.

Montreal-based writer, translator, and editor Oana Avasilichioaei has published five poetry collections, including Expeditions of a Chimaera (with Erín Moure; 2009), We, Beasts (2012; winner of the A.M. Klein Prize for Poetry from the Quebec Writers’ Federation) and Limbinal (2015). Previous translations include Bertrand Laverdure’s Universal Bureau of Copyrights (2014; shortlisted for the 2015 ReLit Awards), Suzanne Leblanc’s The Thought House of Philippa (cotranslated with Ingrid Pam Dick; 2015), and Daniel Canty’s Wigrum (2013). Her translation of Bertrand Laverdure’s Readopolis won the 2017 Governor General’s Literary Award for Translation.