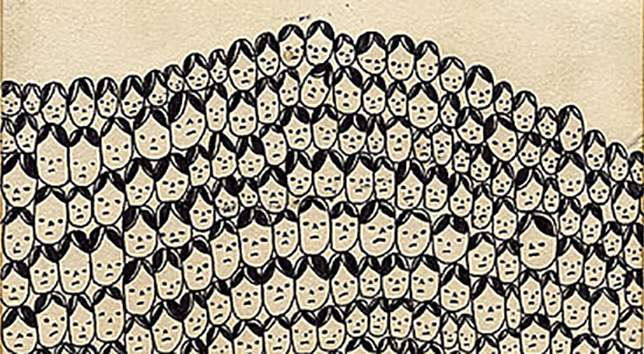 Paul is not always the same Paul, but could very well be a similar Paul, another Paul in a long line of Pauls. Paul runs through forests, drinks in student housing, flirts with girls, at times is a girl, loves men, makes friends, jumps from buildings, hurts people, gets hurt, climbs up towards the sky, waits for a sunrise, and all those human things.

Written while finishing a master’s thesis in creative writing as a kind of relief project from her program’s main thesis, Pauls is a book that Jess Taylor has been writing for the entirety of her twenties (and she’s only twenty-six). What began as a playful, constructive form of procrastination became the opening story “Paul”—Taylor’s first paid publication—and earned her a National Magazine Award in 2013 for its appearance in the uber-smart Little Brother Magazine.

As the title suggests, these stories are full of Pauls—although Paul is not always the main character. At times he is a brother, a roommate, or a friend. On naming characters in her fiction, Taylor writes: “For a while I hesitated to name characters at all, using only a genderless first person, or I would use funny short forms for the names.” By the time she started writing “Paul,” the opening story of the collection (excerpted below), Taylor realized there existed a preponderance of Pauls in her fiction, and decided to go with it. Listen to Jess Taylor talk about naming and Pauls on Bookvacuum with André Babyn and Marcus Creaghan, here.

The stories that make up Pauls play out common scenes of early-twenties life: roommates, part-time jobs, and young love that both blossoms and dies. They are stories about characters who both engage in the world around them and want to escape it. When they engage in the world, they engage fully, and when they escape, they escape to the roof, the woods, the fire escape. In these layered, emotional stories, Taylor harvests hard, uncanny truths from the overgrown flower patches of youthful naiveté.

Available October 1, 2015, BookThug is thrilled to be presenting this bold and authentic debut.

“A magical and penetrating collection of strange, mundane, traumatized and ecstatic people who are all named Paul. Its simple sentences are little atoms of wonder.” —Heather O’Neill, author of The Girl Who Was Saturday Night and Lullabies for Little Criminals

“Reading a Jess Taylor story is like planting a magic bean and watching, with a flashlight, as it grows overnight into something you’ve never seen before. But then you climb up the stalk of the story and look around and realize there is no magic at all, at least, nothing un-real. These are true stories, illuminated with the wisdom of Flannery O’Connor and the wild leaping logic of Hans Christian Andersen.” —Michael Winter, author of Minister Without Portfolio, long-listed for the 2013 Scotiabank Giller Prize

“I read Jess Taylor’s debut with a kind of childlike enthusiasm. As a writer, she’s thoughtful, compassionate, imaginative and intellectually curious. Her stories tend to establish themselves slowly, like a storm moving in, and they always revolve around a strong emotional centre that pulls you in, some sort of gravity. Don’t resist.” —Guillaume Morissette, author of New Tab, finalist for the 2015 Amazon.ca First Novel Award

Pre-order your copy of Pauls: Stories by Jess Taylor, here

Excerpt from “Paul” by Jess Taylor

ONE STREET OVER from Paul lives another Paul. They grew up together and are good friends. People sometimes describe them as inseparable, refer to them as “The Pauls” or just “Pauls” if they think they’re clever. Paul who lives on Werther Street works at a paper mill, and Paul who lives on Spruce Trail Crescent became an academic.

The two Pauls are twenty-five when this story takes place. One Paul has a stack of books in front of him, and the other Paul brushes fragments of wood from his clothes. New Paul is not so new anymore. He’s fifteen. Paul goes to school, and he doesn’t say much (perhaps part of him remembers how wailing hurt his throat). He comes home, and he goes outside, and he listens to the birds. And he walks into the forest, and he thinks about how every day is a new day, a good day, a strange day, and what a world it is that he lives in. He touches bark on trees. He touches the waxy surface of maple leaves and then touches elm leaves and tries to think about the difference. Sometimes he collects hickory nuts that have fallen onto the moss at the edge of the forest. He pretends to be a gatherer in a hunter/gatherer society, but he feels too old for such games sometimes. Those times he goes deeper into the forest where his cat emerges from bushes, and he follows her through the forest, mostly just to see where she’ll go.

There’s a girl in Paul’s math class that has a crush on him, and she writes his name in the margins of her notebook, Paulpaulpaulpaul, and she tries really hard not to think about his last name. The way it would look after her first name. Besides, her older sister told her the other day on the phone from university that not all girls want to get married, and not all guys do either. Sometimes it’s okay to not want those things and to be a Strong Independent Woman instead. And the girl thought that maybe that’s how she should be. “But are we still able to love someone and be independent?”

“Of course. It’s loving the right way. Still being your own person. That’s what I have with Rebecca. Don’t tell Mom.”

So the girl writes Paul over and over and walks home behind him with wistful eyes. Paul never looks back. When the girl gets home from school, she writes different things about him, a boy named Paul. She remembers a Paul her mother once mentioned, one of her old friends, she remembers her sister once had a friend named Paul.

Paul – 15. Boy in my class. I like him. He sits across the classroom, and he’s really good at math. The other day the English teacher called on him in class, and he didn’t even hear him. He’s always far away in his head. It’s impossible for me to know where he goes.

Paul – 19. One of my sister’s best friends in high school. They kissed once at the back of the soccer field, but then he moved away.

Paul – Deceased. Would be 50. Man my mother knew in university. He got very sick with ALS after he graduated. My mother gets really sad when she talks about it, and then she has too many glasses of wine and goes to bed early.

Paul – Fictional. 20. Main character in my favourite movie. The movie is beautiful—the colours all have a blue tint. It’s about a young man, and he falls in love with a young girl even though he only ever sees glimpses of her (the side of her face, her hand brushing back her hair, her back walking in front of him) and follows her through the city, and eventually they meet on a bridge, and the sky is blue, the water is blue, the bridge is blue, even their skin looks blue. Blue, blue, blue. But then he walks away.

Paul – Fictional. 22. Character in a story I wrote. The story is too much like the movie. I don’t want to talk about the story.

Paul – 35. First name of one of my teachers. My favourite teacher. I was in grade five, and he gave me my first adult book to read. To Kill A Mockingbird.

It didn’t make much sense to me, but I liked the characters of Scout and Dill, and I liked the fact that he thought I was smart enough to read it, even though I probably wasn’t.

After making this list, the girl isn’t anywhere closer to understanding Paul, who he is, his motivations. The next day in class, she sends him a letter asking him to hang out after school. She chews on the end of her pen and watches as the boy next to Paul passes him the letter and points to her. She waves. Paul reads the note and searches out her eyes. His are a faded sort of blue (blue, blue, blue) that don’t quite make contact with hers. He nods. She smiles, but he’s already gone back to his work.

Where: The Garrison
Address: 1197 Dundas Street West, Toronto, ON
Time: Doors open at 7:30 PM. Readings begin at 8:30 PM.
Free. Books will be for sale.
For more info or to RSVP, visit https://www.facebook.com/BookThug?fref=ts

Thursday October 15, 2015
The Bookshelf, in partnership with BookThug and Biblioasis, presents an evening with Jess Taylor, author of Pauls, and Kevin Hardcastle, author of Debris (Biblioasis)

Jess Taylor is a writer and poet based in Toronto, Ontario. She is the founder of the Emerging Writers Reading Series and is the fiction editor of Little Brother Magazine. Her work has been published in a variety of journals, magazines, and newspapers, including This Magazine, CNQ, and The National Post. Her first pamphlet chapbook, And Then Everyone (Picture Window Press), was released in April 2014, and was followed by her first full-length chapbook, Never Stop (Anstruther Press) in October 2014. Jess also received the Gold 2013 National Magazine Award in Fiction for her short story, “Paul.” Pauls is her fiction debut.