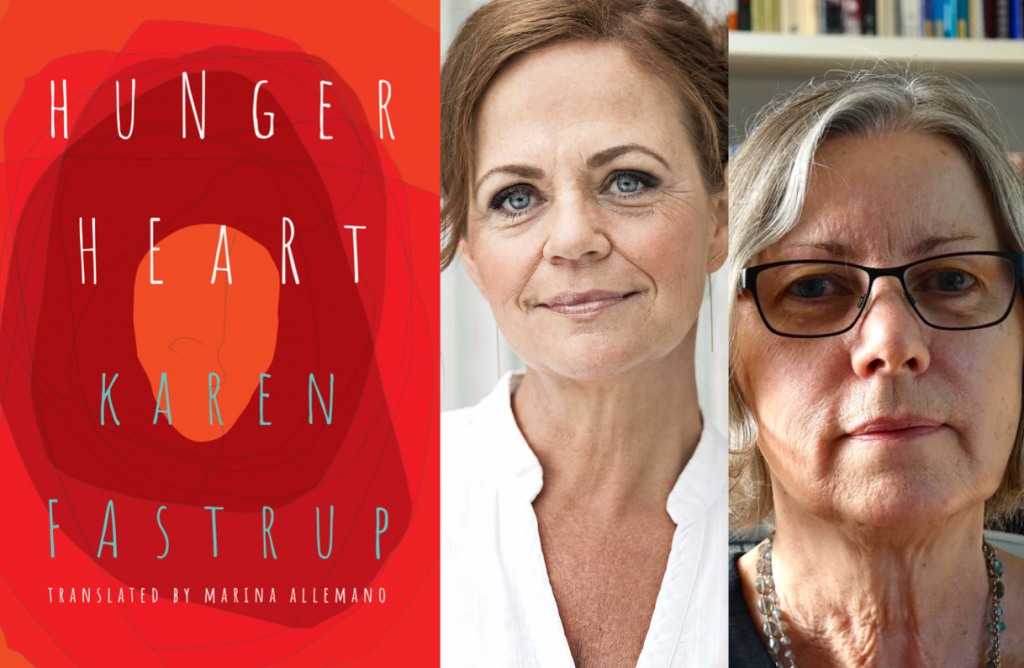 Our final Preview for the Fall 2022 Season features Hunger Heart by Karen Fastrup, translated from Danish by Marina Allemano.

Hunger Heart is a sensual, profound book about love, relationships, mental illness, and recovery by one of Denmark’s most celebrated literary writers. In 2009, we published Fastrup’s beautiful novel, Beloved of My Twenty-seven Senses (translated by Tara Chase). We’re thrilled to work with her again and are eager for English language readers to meet this critically acclaimed work of autofiction.

In Hunger Heart, Fastrup immerses us in the alienations of her breakdown and hospitalization: what it’s like to apologize for threatening your loved one with a knife; how an eating disorder can begin with the discomfort of family and adolescence; and how to make the long journey back to one’s creative life.

“Through spare prose, Fastrup portrays a woman of immense desire—a desire for love that short-circuits her mind, making her seek to control her soul’s hunger by controlling her appetite for food,” writes Marianne Apostolides, author of I Can’t Get You Out of My Mind, “A beautiful example of autofiction in all its power.”

See below for an excerpt from this newest addition to our award-winning Literature in Translation Series. Enjoy! Hunger Heart will be released on November 22, 2022, and is available now for pre-order now from our online shop or from your local independent bookstore. 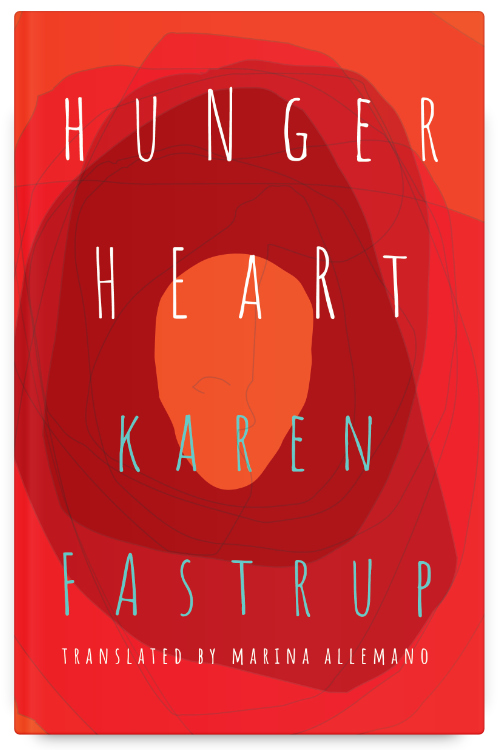 I have obtained an apartment in Gunløgsgade that I can sublet for five months. It has a bay window, and when I stand in front of it, I can see the water by the harbourfront and the sky above it. In the evenings I see the lights in the windows of the hotels and office buildings on Kalvebod Brygge across the harbour, and Jan when he comes around the corner on his bike.

I open the door for him, and we stand holding each other for a long time.

It’s a good thing you waited for us, he says in my ear.

We buy a book called The Hungry Heart. It’s written by a journalist whose wife has borderline personality disorder. It doesn’t describe us as manipulative lunatics but as human beings who are sensitive and have more mood swings and bouts of abandonment anxiety than most people.

Concurrently I read Carsten René Jørgensen’s book on personality disorders. It’s a knowledge-rich, academic work, but at the same time he tries to describe BPD as seen from within.

I get the feeling I could easily curl up and place myself in his hands. He writes that one of the central characteristics of people with BPD is an awareness of not having an authentic connection to the world while at the same time having a strong desire to establish contact with the world and other people. We yearn desperately to belong. And we often feel we’re dominated by our need to experience love and we have a tendency to be overwhelmed by our immediate impulses. He writes of impulses that often involve a desire for life but are typically self-destructive. BPD is the mental illness with the highest suicide rate because the disorder itself causes so much anguish. The fundamental emotions are loneliness, emptiness, and the feeling of being shut out. Or of never really feeling part of the human family in the first place, he writes.

Jan and I go for long walks in the evening. We walk along the harbourfront toward the neighbourhood of Christianshavn, stop for a coffee at Freetown Christiania, continue to the for- mer dockyards at Holmen or across the bike bridge to the Playhouse and the canal area of Nyhavn, walk back via Kalvebod Brygge and across the other bike bridge by Fisketorvet Shopping Mall in the harbour district. Or we walk down along the wharf, through Nokken’s quaint allotment gardens and farther south to Sluseholmen and back up to Fisketorvet and the bridge.

We hold hands as we walk and try to come to terms with the fact that I have an overwhelming need to feel loved and stable in our relationship. While he has an enormous need to be free and not have to commit himself to meet up on a regular basis. Closeness and strong attachments to others weigh him down. And his need to keep his distance and not fully commit to me, and to us, weighs me down.

It’s almost a Gordian knot, I say.
He doesn’t answer.
Sometimes I get the feeling you’re sizing me up, I say. I long for the day you want to devour me without hesitation.

Except that’s not who I am, he says.
No, I say, I know.
But could you perhaps indulge me and text me twice on the days we’re not together? And say good morning and good night?

Danish author Karen Fastrup is the author of six novels. Her most recent book, Hunger Heart, published in Denmark in 2018, was shortlisted for the DR’s Novel Prize in 2019. The Danish Arts Foundation called the book “a work of particularly high artistic quality.” Femina Magazine named Fastrup one of the seven most remarkable women in Denmark in 2019, and the year’s “Taboo Breaker” for the awareness Hunger Heart created around mental illness. In addition to her own writing, Fastrup has translated more than fifty novels into Danish by such notable authors as Sally Rooney, Karl Ove Knausgård, August Strindberg, Linn Ullmann, Vigdis Hjorth, and Per Petterson. Her novel Beloved of My Twenty-seven Senses (tr. Tara Chace) was published by Book*hug Press in 2008. Fastrup lives in Copenhagen.

Marina Allemano holds a PhD in Comparative Literature and has taught Scandinavian Studies and World Literature for two decades at the University of Alberta. She has translated novels and essays by contemporary Danish writers Suzanne Brøgger, Hanne Marie Svendsen, and Dorrit Willumsen, and has written monographs in Danish on these same authors. She lives in St. Albert, Alberta.