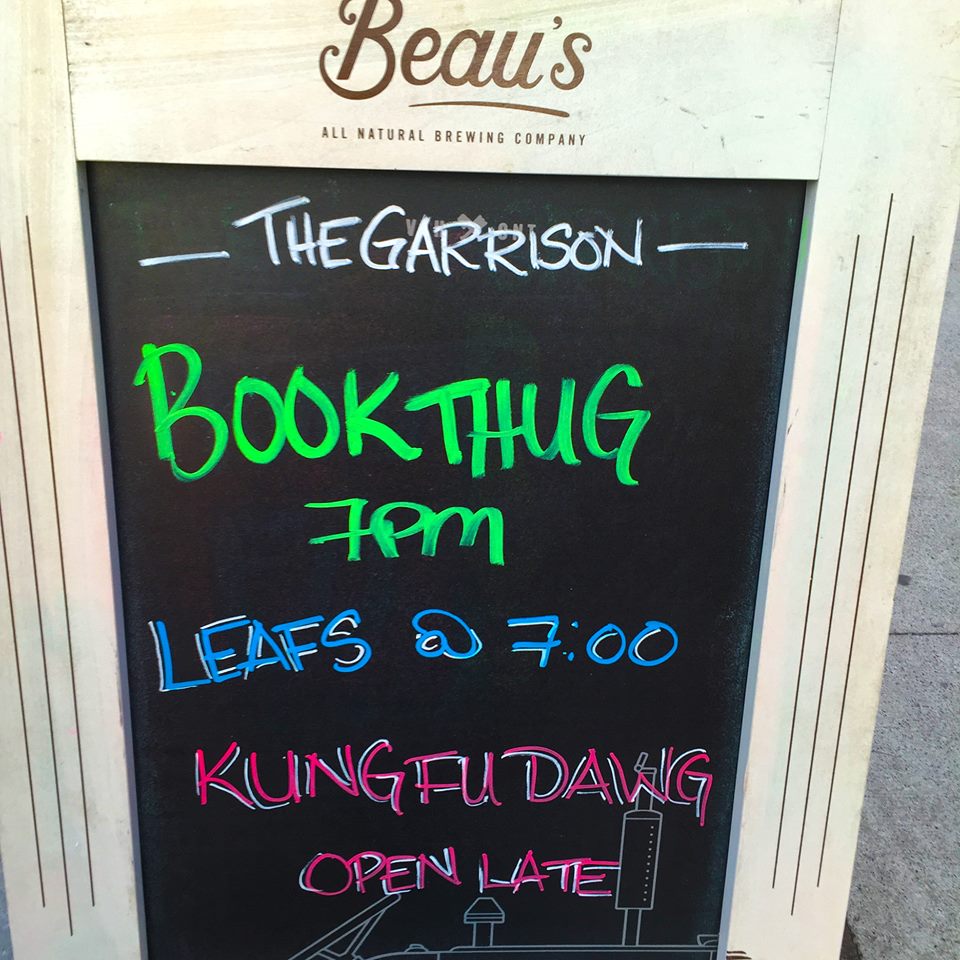 Hey there! For anyone who wasn’t able to be at our Spring 2017 Launch Party last Thursday, April 13th, this recap is here to catch you up on what you missed. Or maybe you were there and you want to relive the fun memories of the night. Six of the ten authors from our spring season entertained us with short readings from their books, including Erin Robinsong, Marianne Apostolides, Bertrand Laverdure and Oana Avasilichioaei, Stephen Cain, Jennifer LoveGrove and Christine McNair. It was fun times!

The venue: The Garrison, one of Toronto’s only fully-accessible venues. Chairs were positioned in rows facing the stage so that everyone who came could sit, relax and enjoy each other’s company before listening to the readings. To get things started, BookThug publishers Hazel Millar and Jay MillAr took centre stage to welcome everyone. They began by speaking about publishing as an act of resistance—which is an important and time-honoured tradition and something that all of us at BookThug are proud to be part of.

Then they introduced Julie Joosten, editor of Rag Cosmology by Erin Robinsong, to the stage. Julie gave a heartfelt introduction to Erin. As Erin began her reading, she shared with us that she is originally from Cortes Island in B.C. and that after all this time she is still often surprised that Spring in eastern Canada is so brown. After some laughter—from her and the audience—she assured us that she is quite delighted by this. This led to her reciting a poem: “Look at this brown day/ look at this brown day/ hosted by beauty.” She continued by reading a poem entitled ‘I’m Working on It.’ Erin talked about how back home in Cortes Island oysters are very plentiful and that you can dig them up and eat ‘free protein’ anytime, but that upon moving east to the city she was surprised to find out that oysters are considered a gourmet ‘chi- chi’ food that people pay high prices for. We all laughed again as she began to read: “Raw oysters for lunch my mother tried to tell me were considered a delicacy/ this seemed to me unlikely/ but what did I know/ about my mother.” Erin was a spectacular opening reader and her mesmerizing performance left us all yearning for more.

Stephen Cain was our second reader of the night. Jay MillAr introduced Stephen by sharing with everyone that the two are old friends, and that his new book, False Friends, is Stephen’s first full collection in more than a decade. The title of the book refers to two words from different languages that appear to be related but have different meanings. One of Stephen’s poems that was a big hit with the audience was ‘Dogma.’  Stephen read it with such poise and its humorous play on words caused a lot of  chuckling throughout the audience: “An act of dog/ You look like someone just shot your god/ Dog is not great/ God bites man/ You cannot serve dog Mammon/ Go God Go.”

Next up was the dynamic duo of Bertrand Laverdure and translator Oana Avasilichioaei, who were introduced by Hazel Millar. Hazel started out by reminding us of the hilarious reading that the two gave at the fall 2014 launch of Universal Bureau of Copyrights. They brought the house down that night with their incredible bilingual performance. With that fresh in our minds, Bertrand and Oana came to the stage. Oana jokingly said, “no pressure, Hazel”, and then the two dived right in with another bilingual reading, this time from the novel, Readopolis. The pair read a passage from that is the ‘story-within-the story’ section of the book: “My name is Ezekiel Bradeau and I kill readers who don’t like my books. Twenty a month, that’s my quota.” Oana’s sensual and careful reading in English peaked our interest from the start. When she was finished reading her section she handed Bertrand the mic and then he read the same passage in French. The two went back and forth like this a few times. While Oana’s delivery was soft and controlled, Bertrand’s was lively and animated. Once again, the two gave us a great tag team reading that kept us entertained from the get go.  At the end of their joint reading we went to a break and people began to line up at the book table, eager to pick up copies of the books they had just heard from.

After the break, which consisted of conversations with the authors, beer on tap, and lots of book buying, Margaret Christakos introduced Christine McNair as our first reader of the second set. Margaret, who worked with Christine as the editor for her new book, Charm, began by extending a generous thank you to Jay and Hazel, and then she gave an equally generous introduction to Christine and her work. Christine began by reading through the section in her book called ‘Reel’, starting with the first poem ‘a’, and then riddling her way through the alphabet to ‘q’. One of our personal favourites was the piece, ‘m‘: “when she met him she was a garden. When she met him she was linen starched and white. When she met him she was in a pale blue nightdress.” Keeping up Christine’s rhythmic tempo was half the fun while the other half was absorbing her beautiful words.

Our next reader, Marianne Apostolides, brought a glass of scotch with her on stage to provide a sip of liquid courage before reading from her stirring new memoir, Deep Salt Water. Marianne gifted us with a soulful and intimate reading: “Mama, where does the ocean come from?” I’d teach you. He taught me. Not oceans, but lifetimes.” At the end, she took another sip of her drink, and thanked Jay and Hazel, the artist Catherine Mellinger for creating such exquisite mixed media collages to accompany the text, and her editor, David B. Goldstein. It is always a special gift to hear Marianne read, and we can’t wait to hear more from her at the solo launch for Deep Salt Water on Wednesday, May 3rd at Gallery 345. 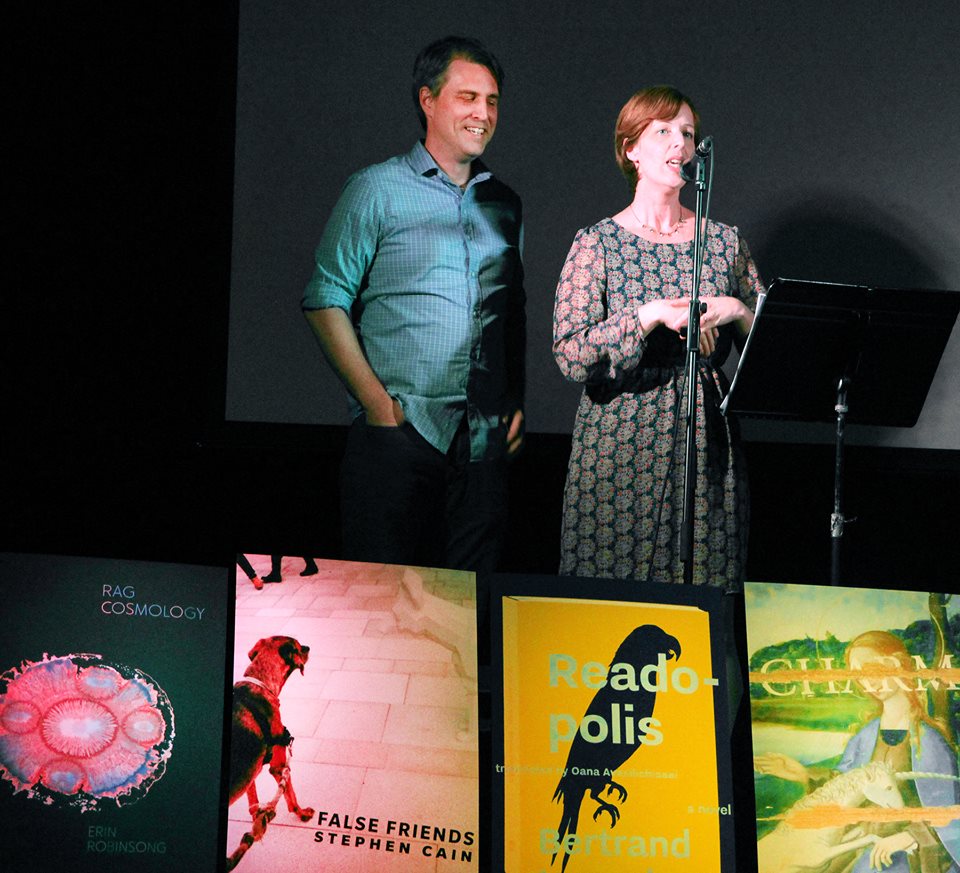 The readings ended with Jay and Hazel giving thanks to the audience, congratulating the authors on their amazing new books, and giving recognition to the rest of the BookThug team, our funders, and more. So, if you were at our event, we thank you so much for joining us! We enjoy conversing with all of you and getting to share the work that we love, and that hopefully you too will love. If you weren’t able to make it this time, then we hope you enjoyed this recap. We also hope to see you at our Fall 2017 Launch Party on Thursday, November 2 (back at The Garrison!), if not sooner!