‘Being alive is hella complex and I want art that reflects that!’: In Conversation with Mat Laporte | Book*hug Press 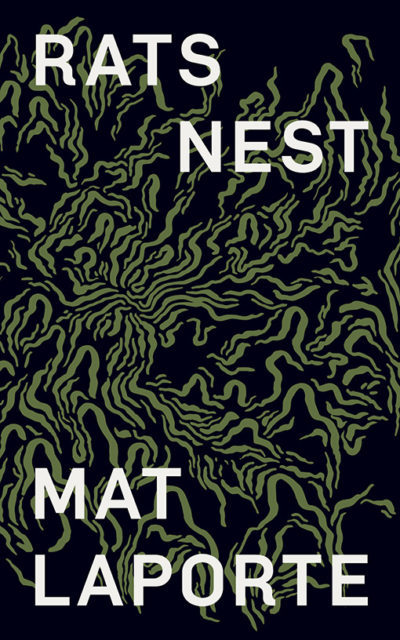 RATS NEST, the long-awaited debut book by Mat Laporte is a mysterious and sometimes hallucinogenic sci-fi short story collection that builds a narrative out of the complexity and dialectical uncertainty that many people feel about being alive in the 21st century.

RATS NEST introduces readers to a protoplasmic, fantastical underworld, as navigated by a self-reproducing 3D Printed Kid made especially for this purpose. As the Kid descends the layers of a seemingly never-ending pit, its nightmares and hallucinations—recorded in stunning detail—unfold in twelve chilling stories of unreality that will make readers think twice about what it means to be a human (or humanoid) on the planet we call home.

Spencer Gordon, Mat’s longtime friend, collaborator and editor, recently spoke with him about the curious journey that led Mat from poetry to fiction to create an unconventional out-of-this-world book filled with just the right blend of horror and fun as well as subtle nods towards some of his favourite books and movies.

Spencer Gordon: This book took an unconventional route to settling into its current form—beginning as poetry, transforming into a continuous column of prose, before shifting into discrete short stories (many of which take on traditional hallmarks of fiction, such as protagonists, dialogue, rising actions, climaxes, and so forth). Can you comment on how RATS NEST became what it is, on where it came from, and on what motivated these shifts in genre? What were the main challenges and the primary pleasures of these movements?

Mat Laporte: RATS NEST started off as a long, book-length prose poem made up of writing I’d been accumulating for a while. I wanted it to feel something like the long, hallucinogenic descriptive passages in Gravity’s Rainbow, Kevin Davies’ long poems like “Lateral Argument,” Renee Gladman’s Ravickians Trilogy, and Alice Notley’s The Descent of Alette, to name just a few influences.

I called it RATS NEST because in writing it I felt like I was trying to see how far past the semantic edge I could get while describing the amorphous, fearful stuff I found there. I wrote that poem and worked on it for about a year. I wrote it and edited it in much the same way as I write poems—basically by writing kind of automatically at first, relying heavily on my subconscious, and allowing myself to use pieces or tones of things I read, heard, saw or thought, without any clear structure or idea about what I’m doing, until I’ve built up a big body of raw writing. Then I set about sculpting it, recording it and listening to it out loud, repeatedly, as a way to hear it, and give it some kind of shifting tonal core.

I got to a certain point in that process and noticed a problem: the poem was 200 pages long and, I felt, quite unpleasant to read. The combination of unstructured narrative fragments and dense, abstract language, with constantly shifting pronouns and verb tenses, was very confusing to read and every time I read it out loud or edited it, I felt nauseated. That’s not the effect I wanted the book to have. I wanted it to be dark and troubling but also humorous and somewhat fun to read. I was reading a lot of fiction at the time—especially genre fiction like s-f, fantasy, and horror—and I was unsatisfied with some of the ways that, what I saw as the poetry elements, detracted from the effects of some of the narrative elements, like setting, character, plot, etc.

I wanted to figure out how to write better fiction so I salvaged a few scraps of the narrative from that long poem (including the 3D-Printed Kid stuff) and started over again, this time with an eye towards making it into more of a novel made up of stories. During this process, I realized that I know almost nothing about writing fiction and that it’s quite hard to do well. So I muddled my way through it as best I could and the result is RATS NEST. In retrospect, I liken this whole process to building a chair by first filling an empty room with various pieces of wood and then going into the room and trying to figure out where the chair is in all that mess. It’s a costly way to write and I don’t recommend it.

SG: What works of genre fiction were you reading? How would you characterize your attraction to horror, in particular? It’s definitely a genre or mode that seems to require endless justification for its existence. What draws you to the disturbing and macabre? What does it do for you as a reader, then as a writer? And, what kinds of horror stories are most appealing to you: old stories told in new ways, new stories told traditionally, or some repulsive admixture?

There’s a quotation by the late great theorist José Esteban Muñoz in an essay he wrote about the punk band The Germs called “Gimme Gimme This … Gimme Gimme That: Annihilation and Innovation in the Punk Rock Commons,” which my friend Sarah Pinder gifted to me, printed on a patch (which now hangs on my bookshelf) that I think explains a sometimes troubling logic, and gives me some comfort about my life choices:

“At the heart of the punk rock commons one locates the desire, indeed the demand, for ‘something else’ that is not the holding pattern of a devastated present, with its limits and impasses. This demand is for a dystopia that functions like the utopian.”

This passage reminds me, for example, of the society you find in the fictional town of Bellona in the novel Dhalgren by Samuel R. Delany, in which people are figuring out how to live loving and peaceful lives in an upside down disaster zone. I don’t know why I’m drawn to or attracted to horror or the fantastic or the imaginative (some might even say escapist) genres. It’s a weird bind that I’m trying to be understanding of in myself that, from the often negative emotions expressed in punk and metal music, to the fantastic/grotesque paintings of Leonora Carrington, to David Cronenberg’s movies, to the terrifying short story “A Planet Named Shayol” by Cordwainer Smith … this is how I manage to enjoy life and I’m making things that, hopefully, others will get enjoyment from as well. Being alive is hella complex and I want art that reflects that!

SG: You mentioned that the poetic elements of your earlier drafts were detracting from the narrative effects. Obviously poetry can tell a story, can create setting, move plot, feature speakers and characters, and so forth. But here we’re talking about what one might call traditional fictional architecture. Now, when writing fiction, do you still employ that automatic/subconscious process you used when writing poetry? What has had to shift in your brain, in your methods? And, why do you think that fiction became the better vehicle for delivering a work that was “dark and troubling but also humorous and fun”?

ML: There’s a literary device I learned about recently called the ‘objective correlative.’ You probably already know what it is but the idea, I think, is that, instead of saying ‘character x is afraid’ or ‘I’m afraid’ you find or create something in the objective world of that character that, once described, will imply that emotion instead of having to state it explicitly. Implication is a useful device in art, I think, because it operates on the subconscious parts of the mind—untapped places where a lot of mysterious and beautiful things reside. To extrapolate one layer further, I feel like imaginative fiction can be, in itself, a kind of objective correlative to the world we live in in a way that poetry, in my experience of it, often isn’t. I suspect this has something to do with one of the main ways we encounter poetry, or the way it’s often composed, which is to be eventually read in a live setting in front of an audience. The poem, in a live setting or when written for that purpose, is tied to the poet’s voice and presence, and so it’s hard to separate what they’re saying from the context you hear it in and of the poets themselves. Check out what I mean just at the level of address in poems. While it’s true that, like you say, character, setting, etc., can exist in poetry, how often is that actually the case? I find that the mode of address you find in poetry is often limited to an ‘I’ and a ‘you,’ with an occasional ‘we,’ and this mode of address also implies that the context of the poem is ‘here and now’ or ‘not that long ago’ in the poet’s own life. I don’t think this is bad in any way and I can see how in a lot of ways this is the effect that people want it to have. At a certain point, just out of curiosity, I started trying to use ‘he’ ‘she,’ ‘they,’ ‘it’ and ‘somewhere in the distant future’ or ‘a place that has never existed’ as the context in poems and found myself having to justify these things (in terms of maintaining a willing suspension of disbelief) by filling in enough space about ‘where’ ‘what’ and ‘why’ they occurred that eventually I realized I was writing something closer to fiction.

SG: How do you imagine your future writing, now post-launch? This is not only a cliché inquiry into what you are writing now, but also a more specific question about how, if at all, publishing RATS NEST has changed your approach to writing, your ambitions, expectations, hopes and fears.

ML: I’m pretty excited about writing more imaginative fiction. I’ve got a bunch of stories on the go, mostly for practice. I need to work on becoming a better person then I want to become a better writer. I’m afraid of failure but I embrace it.

Mat Laporte, born in Sault Ste. Marie, is a Toronto-based writer and co-founder of the micro-press Ferno House. Laporte is the author of a tetralogy of chapbooks: Demons, Billboards from Hell, Life Savings (nominated for the 2013 bpNichol Chapbook Award), and Bad Infinity. His poetry has been featured in numerous publications, including Poetry is Dead and Lemon Hound. RATS NEST is Laporte’s first full-length book.