The Soundtrack Behind the Book: Suture! | Book*hug Press 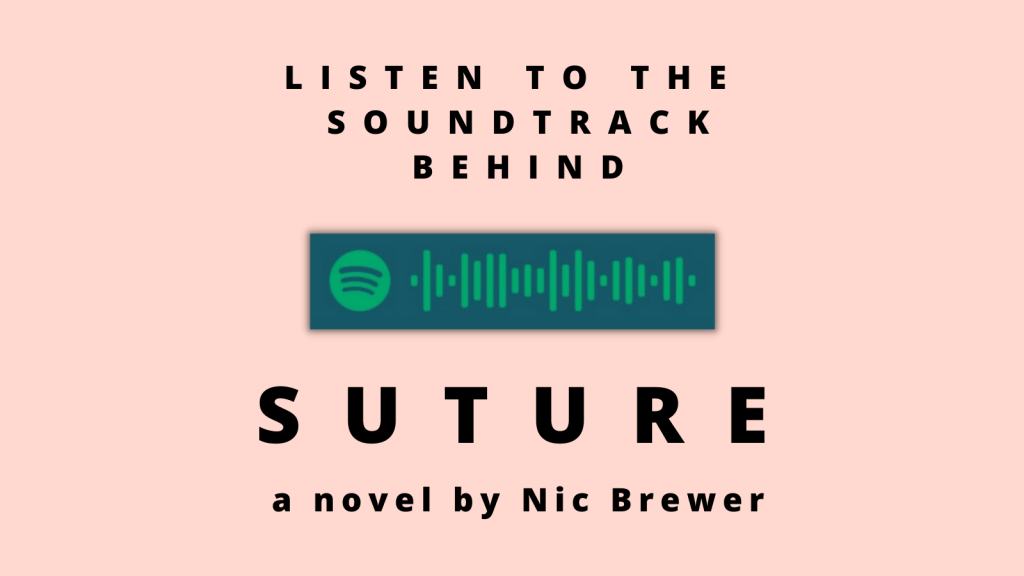 Next up in our Active Listening series is Suture, Nic Brewer’s inspiring debut novel which blends body horror with incisive meditations on love, pain, and the creative process. “I read this book with wonder,” writes Gillian Wigmore, author of Glory, “Brewer’s confident prose swept me along. Hers is sure, sharp writing that doesn’t flinch from tenderness.” “A nimble, fearless debut,” writes Canisia Lubrin, Griffin Poetry Prize-winning author of The Dyzgraphxst.

Nic Brewer hand-picked a selection of songs to represent Suture—some essential to the writing of the book, others echoing its core themes and resonances. You can listen to this stellar playlist on Spotify. Below is introduction-of-sorts, prepping readers for a decade-spanning musical journey:

The Suture playlist is a strange one – it’s probably about as long as it will take you to read the book, and there’s kind of a bit of everything. The first third of the playlist is songs I would listen to while I wrote: when I listen to them, it feels like my brain softens at the edges, like my heart peels off its jacket and my bones settle into the ground for a rest. The last two-thirds are songs I added after finishing the book, and which either related directly to some feeling in the book, or which I realized after played a huge part in shaping what good art means to me: the way some of these songs make my insides quiver is exactly the kind of underskin feeling I want to leave readers with.

Some of these songs I would listen to on repeat for hours while I wrote: Dark Parts by Perfume Genius, 29 #Strafford APTS by Bon Iver (there is a moment in this song where the audio cracks and so too does my chest), Walking Far from Home by Iron and Wine. Other songs directly inspired parts of Suture in its earliest days: Wrecking Ball by Mother Mother inspired the character of a raging, angry, fearless drummer; Light Leaves, Dark Sees Pt. II inspired a scene where a character sees their own organs being mass reproduced; Hallelujah (yes it’s the Pentatonix version, I love Leonard Cohen but I am also a basic bitch) inspired a panicked, selfish monologue from an abuser to their partner. This strange collection of songs captures a little bit of most moments from my 20s, and a little bit of everything that has gone into and will hopefully come from Suture. I hope it makes you shiver.

If you prefer to listen while reading the book, which we *highly* recommend, Suture is available to order from our online shop, or from your local independent bookstore.

Nic Brewer is a writer and editor from Toronto. She writes fiction, mostly, which has appeared in Canthius, the Hart House Review, and Hypertrophic Literary, among others. She is the co-founder of Frond, an online literary journal for prose by LGBTQI2SA writers, and formerly co-managed the micropress words(on)pages. She lives in Kitchener, ON, with her partner and her dog. Suture is her first book.