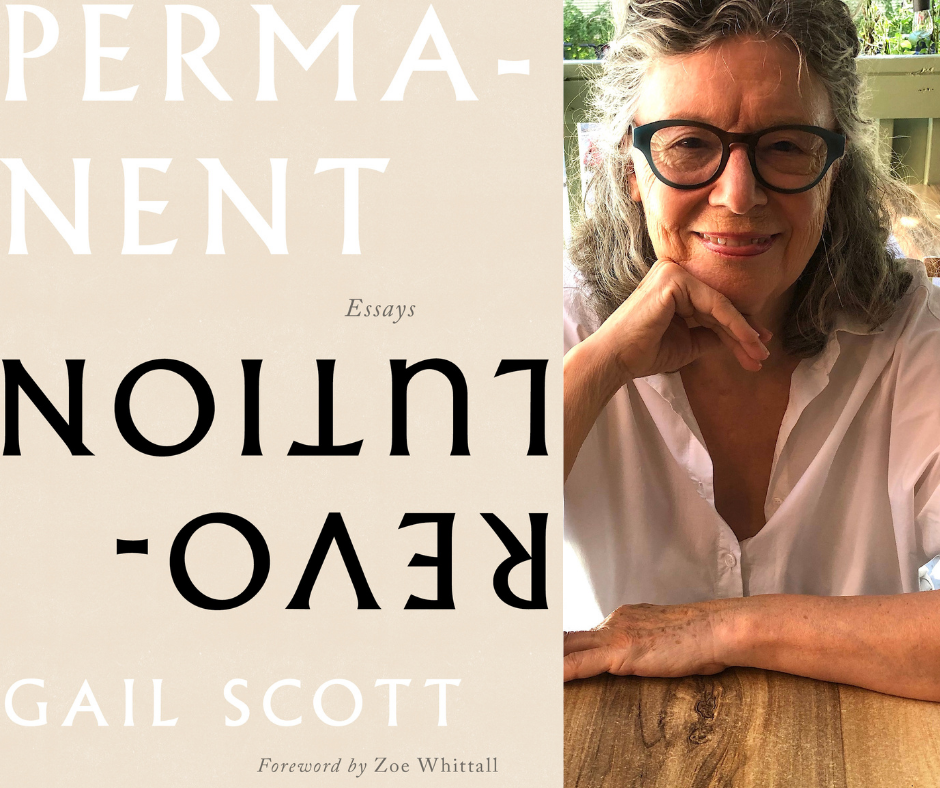 Friends of Book*hug, meet Spring 2021. Earlier this year, we unveiled the forthcoming titles in our Spring 2021 season, but now it’s time to get to know the authors and their books a bit better. For the last couple of months, we’ve been highlighting individual spring titles and sharing exclusive excerpts on the Book*hug blog.

Today, we’re excited to preview the final title in our Spring season: Permanent Revolution: Essays, by Gail Scott, with a foreword by Zoe Whittall and afterword by Margaret Christakos. “A writer may do as she pleases with her epoch. Except ignore it, ” says Gail Scott. Permanent Revolution traces Scott’s seminal investigation of experimental prose to the present, relating the matter of writing in sentences to ongoing social upheaval. As she writes, “Where there is no emergency there is likely no real experiment.”

In this collection, which includes a recreation of the iconic Spaces Like Stairs, Scott interrogates her era, engaging in conversation with other writers across the continent identified with current queer and feminist avant-garde trajectories. Permanent Revolution is an evolutionary snapshot, and Scott—belonging in the canon alongside Maggie Nelson, Lydia Davis and Renee Gladman—is an important feminist thinker of our time.

“At once erudite and intimate, Permanent Revolution is a vital set of meditations on difficulty and feminist art,” writes award-winning author Anne Boyer. “Gail Scott convincingly and beautifully evokes feminism as an ongoing experimental practice: courageous, expansive, and necessary to all.” Kate Zambreno, author of Heroines and Drifts, writes that she “can still remember the thrill of first entering the space of Gail Scott’s novel, My Paris, a diary written all in present participles… In these essays, we get to travel through Scott’s thinking through narrative, gender and queer aesthetics, from philosophizing her own experiments in prose to being in conversation with the écriture feminine of friends, from Nicole Brossard’s Mauve Desert to New Narrative.”

We’ve selected an excerpt from Permanent Revolution, which you can read and enjoy below. The book is forthcoming from Book*hug Press on May 25th, 2021, and is available now for pre-order, either in our online shop or from your local independent bookstore. 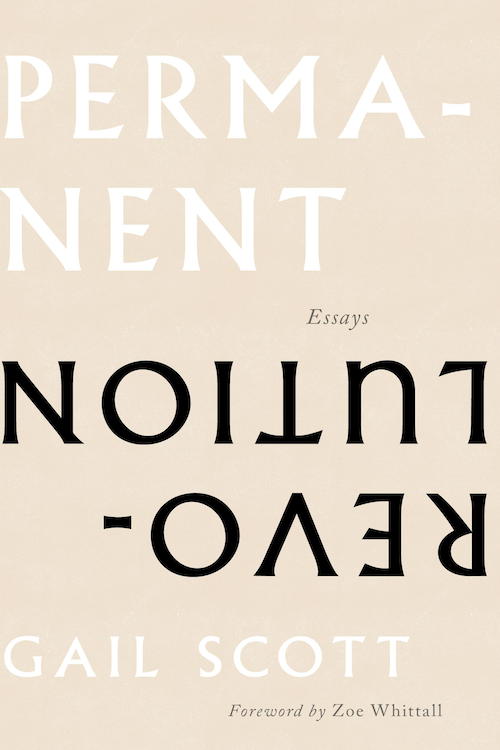 Excerpt from “The Attack of Difficult Women Prose”

It was with Beckett, I travelled. Dragging my battered steamer trunk behind. Full of stacked notes, marked reading copies of his + lesser-known avant-garde novels. Not to mention facial care treatments, feminine hygiene products. A redingote! The trunk becoming plastered, over time, with identifying stickers: FEMINIST, LESBIAN, LEFT-WING EXPERIMENTAL, ANGLO-QUÉBÉCOISE. Beckett, ambling along beside, bearing underarm a simple handcrafted leather case stamped WRITER. Getting off trains, I glanced back to see his case was not forgotten. Pandering to ancient catechisms of protecting masculine freedom to be charmingly distracted. Immoderately seduced by his penchant for resisting ‘sense,’ on which literary barristers have heaped so much respect. Cou-rage, says a friend [etymology (Fr.): heart-anger]. “Think of it as noise. As I do with Adorno.” She stands as if on stage. Bright magenta lipstick. Skirt just above knees. Hair blowing cinematically. She/Anaïs walks to the window, flings it wide remembering a similar gesture made by Elizabeth Taylor and Alice B. Toklas…. This action throws resentment to the wind… assuring that the pleasure of the moment is hers.³

In what utopia is Anaïs’s gesture in the aperture of the enclosure a trope for women wanting to approach, intuit, touch, to seize upon the inextricable of the world?⁴ Is not Anaïs’s gesture, within the portal, followed by double-work [we are also familiar with the irony of that]? …first she writes then she impresses the writing on paper. All the while restraining her energetic spirit from bolting up to whoever’s apartment as she does not want energy to be mistaken for desperation.⁵ Her self-published letters, commodious in their way of explaining women to men, wrought in language the tender male of the species finds neither emasculating nor unreasonable. One could also ask: Is her gesture—one could say strategy—leashed to impulses learned in the figurative enclosure, an impediment or ticket to freedom? And once released, once beyond the gate, will she, Anaïs, be full participant in public discourse?

I sit on the edge of my hotel bed. Fe-male, but not skirtable enough to rustle, fashionably bespectacled, impeccably professional [a mite flirtatious], in the folds of the codex. Though why should a woman not use every wile in her repertory to achieve her considerable ambitions? My concern: One’s choice of sociability may risk impacting creative outcome. But why then travel with the likes of Beckett? Is my heart-anger, if bedazzled by his genius, not risking hesitating to move forward at the edge of a precipice? If the line simply continues without being crossbred with the non-aesthetic fact, nothing is ever created.⁶ I am taking the non-aesthetic fact to mean expression of the entire range of exclusion: Gender [all of them]. Race [for those not people of colour, the task is, I believe, to participate in a critical construction of whiteness]. Class [always class].

Gail Scott is the author of Spare Parts (1981), Heroine (1987, re-issued in 2019 with an introduction by Eileen Myles), Main Brides (1993), My Paris (1999), Spare Parts Plus Two (2002), and The Obituary (2010). Her essays are collected in Spaces Like Stairs (1989) and in La Théorie, un dimanche (1988) which was translated into English as Theory, a Sunday (2013). Scott is co-editor of the New Narrative anthology: Biting the Error: Writers Explore Narrative (2004). Her translation of Michael Delisle’s Le désarroi du matelot was shortlisted for a 2001 Governor General’s Literary Award. A memoir, based in Lower Manhattan during the early Obama years, is forthcoming. Scott lives in Montréal.