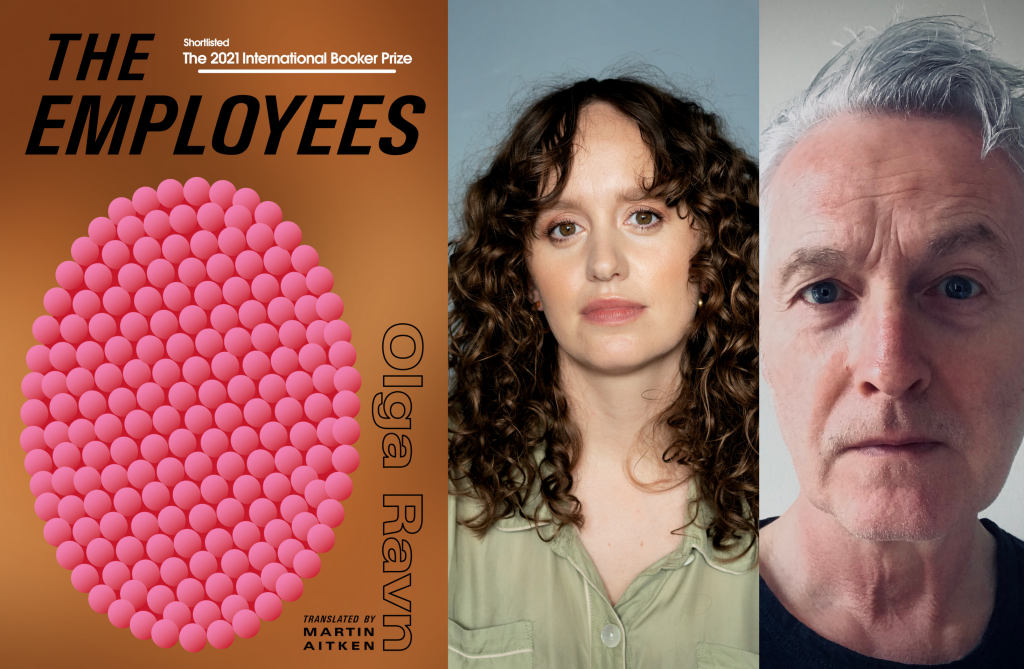 To curb the mid-winter chill, we are kicking off our Spring 2022 Preview series! Over the coming weeks we will be introducing readers to the cast of authors and titles on our Spring 2022 list, and sharing exclusive excerpts to give a sense of what’s to come. First up is The Employees by Olga Ravn, translated by Martin Aitken, the latest addition to our Literature in Translation series.

Shortlisted for the 2021 International Booker Prize, longlisted for the 2022 Dublin Literary Award, and beloved by critics near and far, The Employees reshuffles a sci-fi voyage into a riotously original existential nightmare.

Funny and doom-drenched, The Employees chronicles the fate of the Six-Thousand Ship. The human and humanoid crew members alike complain about their daily tasks in a series of staff reports and memos. When the ship takes on a number of strange objects from the planet New Discovery, the crew become strangely and deeply attached to them, and start aching for the same things—warmth and intimacy, loved ones who have passed, shopping and child-rearing, and faraway Earth, which now only persists in memory—even as tensions boil toward mutiny, especially among the humanoids.

“The Employees is not only a disconcertingly quotidian space opera; it’s also an audacious satire of corporate language and the late-capitalist workplace, and a winningly abstracted investigation into what it means to be human,” writes Justine Jordan for The Guardian. “Everything I’m looking for in a novel. I was obsessed from the first page to the last,” adds Max Porter, author of Lanny.

Check out the excerpt below for a slim taste of Ravn’s crackling, exhilarating, foreboding prose. Enjoy! The Employees will be released on March 8, and is available now for pre-order from our online shop, or from your local independent bookseller.

What would it mean for me to know that I was not living? That I, who am human, was instead a chiselled, sculpted stone, like the stones in this room, no more intelligent, no more sentient than that? And what would it mean if one could move only between two rooms, one containing the objects, the other the voices, to pass from room to room through a stream of light, in a fatty gush of light, endeavouring to love an object as a human being, a human being as an object? And what would it mean to know that these two rooms contained every space we ever occupied, every morning (November on Earth, five degrees Celsius, sun dazzling low in the morning sky, the child in the carrier seat on the back of the bicycle), every day (the ivy reddening in the frost on the outside of the office building), and every night (in the room below the stone pines, someone’s breath upon your eyelid), and that every place you ever knew existed there in these two recreation rooms, like a ship floating freely in darkness, encompassed by dust and crystals, without gravity, without earth, in the midst of eternity; without humus and water and rivers, without offspring, without blood; without the creatures of the sea, without the salt of the oceans, and without the water lily stretching up through the cloudy pond toward the sun?

Olga Ravn is one of Denmark’s most celebrated contemporary authors. Her work combines several genres, often crossing over into visual arts. Her debut poetry collection, I Devour Myself Like Heather, was published to critical acclaim in 2012. Alongside Johanne Lykke Holm, Ravn ran the feminist performance group and writing school Hekseskolen from 2015 to 2019. She has also worked as a critic, teacher, and translator. In collaboration with Danish publisher Gyldendal, she edited a selection of Tove Ditlevsen’s texts and books that relaunched Ditlevsen’s readership worldwide. The Employees, translated into English by award-winning translator Martin Aitken, was a finalist for the 2021 International Booker Prize. Ravn lives in Copenhagen.

Martin Aitken has translated the work of contemporary Scandinavian writers such as Karl Ove Knausgaard, Peter Høeg, Ida Jessen, and Kim Leine. He was a finalist at the U.S. National Book Awards 2018 and received the PEN America Translation Prize 2019 for his translation of Hanne Ørstavik’s Love. His translation of Olga Ravn’s The Employees was shortlisted for the 2021 International Booker Prize. Aitken lives in Denmark.