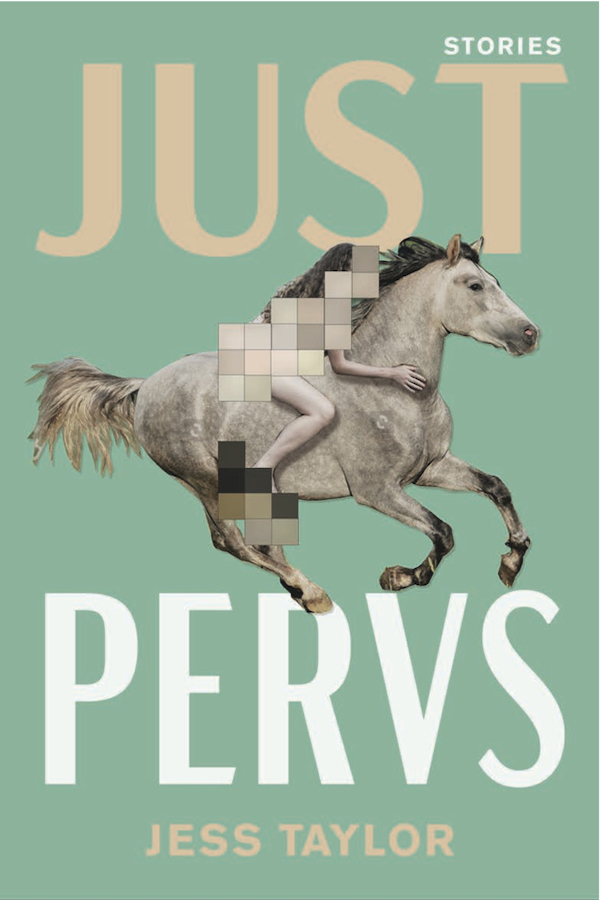 In Just Pervs, contemporary views of female sexuality are subverted, and women are given agency over their desires and bodies. Through these characters, sex is revealed to be many things at once: gross, shameful, exhilarating, hidden or open—and always complicated.

“Elegantly written and cleverly executed, all aimed at capturing the human condition and the often surprising content of our secret lives,” writes The Toronto Star. In a review for rabble.ca, Jessica Rose writes, “Just Pervs imagines a world in which women’s sexual desire isn’t disgraceful; it’s communicated, expressed, fulfilled, and accepted.”

Taylor reads an excerpt from the collection’s title story, “Just Pervs,” in the following video:

It was cold like this the night I tried to go back to Alex. I begged him through the door that was once our door. I told him I was naked under all my clothes, he just had to take them off. I knew all his cheesy fantasies.

Sometimes he texted to check up on me, but I could tell he never got over the cheating.

I was thinking about it, Jill, and it makes sense… Like, you know, a soul? When I was little, my mom said, it’s your true self, it’s the self that God sees, it’s what’s in you. She said it looked just like me, but it was this ideal me. I liked it when I was little because I wasn’t who I wanted to be yet. But the thing about the soul is, I think anyway, that it’s actually a thin layer spread across the skin. Think about when your heart gets broken, right? That’s your soul hurting, but it’s the same burning as when you skin your knee or something. That’s why I think, Jill, you don’t need to worry about having a soul or not having a soul. You have skin, don’t you? Then you have a soul. Feel that? Yeah, it feels good, right? That’s because it’s me, caressing your soul.

These nights that I wander drunk, looking for someone, anyone, to fuck, I expect to find a part of Jenade lying in front of me on the cold, iced cement. A finger. A shin with an exposed bone. Even a few strands of her thick dark hair.

For me, the plays chronicle my several failed attempts at sex. I always come close: the nips of my A-cups are rubbed on a bus where I also witness my first hard dick, for two months I have a boyfriend I give multiple hand jobs and one blow job to, and I try to seduce a boy in my anthropology class by wearing no underwear and flashing him my hip bone every time I grab something out of my baggy pants pocket. All of this is true, but I can never get rides to my friends’ houses, and very rarely am I allowed on the internet to chat with boys. On top of that, they say I’m flat as flat as flat, although, at night, I study myself naked and am happy with my tiny tits that I know are growing a little each day.

Someone found a page from one of my plays on the ground, and I hadn’t even changed our names in it, so the person photocopied it and stuffed it into lockers. People laughed for a bit, but we didn’t really care. Actually it was a bonus. Like we’ve been doing this almost revolutionary thing in secret and now finally it’s time for it to be shown to the world. A few of the guys told me they liked the play, the writing, that they kept it by their bed at home and then they laughed and I laughed too. Maddy in science told us, “You guys are just pervs. You’re so gross. You’re like dudes.”

“She’s just jealous she’s not in on it,” Penny said after Maddy had torn the play into strips and scattered it all over my desk. “And isn’t that perfect? She’s right. That’s what we are. Just pervs.”

(Save 25% off all short story collections from Book*hug Press, including Just Pervs, until May 31. Remember to follow along all month as we celebrate short stories by sharing excerpts and readings on the Book*hug Blog. Follow us as well on Facebook, Twitter, and Instagram.)

Jess Taylor is a Toronto writer and poet. She founded The Emerging Writers Reading Series in 2012. Pauls, her first collection of stories, was published by Book*hug Press in 2015. The title story from the collection, “Paul,” received the 2013 Gold Fiction National Magazine Award.